Six Things to Do in Phoenix This Weekend

You made it to the weekend again. Celebrate by attending a mask festival in Mesa, playing some tiki bingo, or watching the Arizona Cardinals play the Minnesota Vikings.

You‘ve got a license to chill this summer, as Madison Center for the Arts, 5601 North 16th Street, presents a touring production of the musical Jimmy Buffet’s Escape to Margaritaville. Critics didn’t love the musical when it had a brief Broadway run a couple of years ago, but it’s easily forgiven by those who just want an excuse to relive memories of palm trees and margarita glory days. The musical features music and lyrics by Jimmy Buffett, whose 1977 song "Margaritaville" was inducted into the 2016 Grammy Hall of Fame in light of its historic and cultural significance to the generation that embraced it. Don your best mash-up of theater and tropical attire and join the fun, as the center joins a growing roster of creative spaces eager to bring audiences back for live performances after a pandemic pause. The musical follows the adventures of a laid-back island bartender who falls for a career-minded tourist, so you can only imagine the twists and turns that transpire amid the Hawaiian shirts and sunglasses. Tickets for the 7 p.m. shows on Friday and Saturday, September 17 and 18, start at $80. Look for a buy-one, get-one free offer when you buy your tickets online. Lynn Trimble

Junk in the Trunk

These days the expression “junk in the trunk” could easily apply to all those pandemic pounds put on during the last year or so. But there’s a better way to spin the expression, by thinking instead about all the treasures you haven’t been able to shop for at festive fairs and artisan markets since the advent of early Covid-19 shutdown days. The popular vintage market is back for its 10th year in Scottsdale, where more than 130 crafters, curators, and artisans with local and national roots will be sharing their custom wares at WestWorld of Scottsdale, 16601 North Pima Road, Scottsdale. On Friday night, September 17, you can shop from 4 to 9 p.m. with a $40 ticket. Or you can get a $25 early bird ticket for 8 to 10 a.m. on Saturday, September 18. They’ve even got select Saturday and Sunday hours when admission is just $8. Besides 12,000-square-feet of shopping space, you can check out a fun lineup of live entertainment and food trucks. Take along your holiday shopping list, because winter holidays will soon be upon us, and this is a great way to explore the small creative businesses hustling every day to make the vintage magic and charm happen. Lynn Trimble

Writer and illustrator Maira Kalman once described visiting a museum as “a search for beauty, truth, and meaning in our lives.” And on Saturday, September 18, metro Phoenix residents can engage in such high-minded hunts during this year’s Smithsonian Magazine Museum Day. The annual event, which is put on by the Smithsonian Institution’s official journal, involves participating museums across the U.S. offering free admission to the general public. Here in the Valley, eight institutions will take part, including the Scottsdale Museum of Contemporary Art, 7374 East Second Street; the Tempe History Museum, 809 East Southern Avenue; and the Arizona Commemorative Air Force Museum, 2017 North Greenfield Road in Mesa. You can spend the day strolling through a particular spot while soaking up history, culture, and some of the aforementioned concepts on the cheap. Operating hours vary. Free tickets and a list of participating museums are available on the Smithsonian Magazine website. Benjamin Leatherman

There’s plenty of lore around the game of bingo, where people try to match the numbers on their game cards with numbers that get called out for the crowd of eager participants hoping to take home the night’s winnings, which vary depending on where you’re playing and what’s at stake. It’s thought to have originated in 16th century Italy, but by the 1920s it had made its way to New York. Naturally, a traveling salesman was involved, but that hasn’t dampened the enthusiasm of its fans through the years. Join fellow geeks for a unique spin on bingo on Saturday, September 18, as Atomic Age Modern, 140 West Mesa Street, Mesa brings Tiki Bingo to the table. It’s happening from 7 to 10 p.m., and you can get two bingo cards for $10. Here’s your chance to rock your best tiki-inspired fashion and accessories, and say goodbye to another stressful week with a night of old-fashioned fun. Lynn Trimble 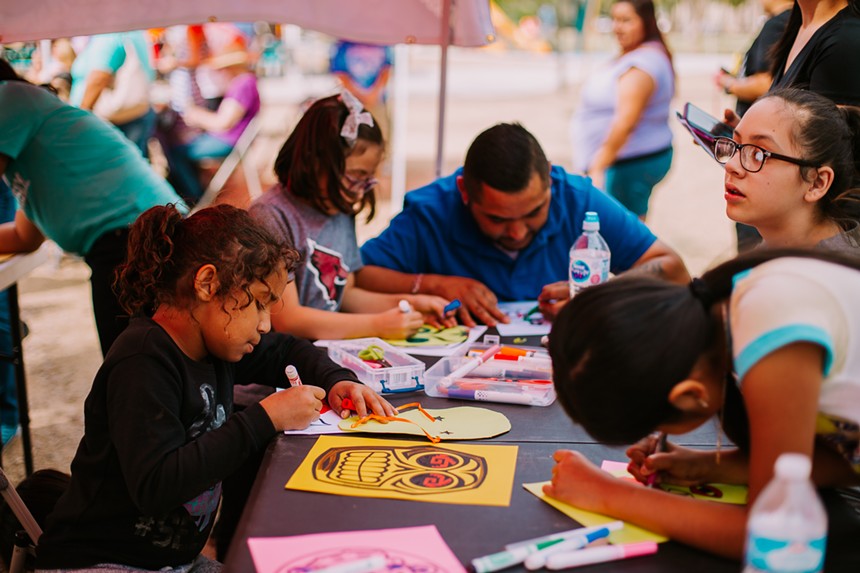 Perhaps you haven’t heard that there’s a master mask-maker in our midst. He’s Zarco Guerrero, a Mesa-based artist who has a long history of making masks for theater, festivals, exhibitions, and other events centers around culture and community. Experience his work during the free Masks Alive Festival happening from 2 to 5 p.m. on Sunday, September 19, at Pioneer Park, 526 East Main Street, Mesa. The family-friendly gathering will include giant puppets, masked musical and dance performers, food trucks, and hands-on activities for children. The performance lineup folklorico ballet, Brazilian Capoeira drumming, mariachi music, African music and dance, and Japanese Taiko drumming. It’s totally cool to show up in your own creative or outrageous masks. Masks may have gotten a bad rap in some circles amid public health mandates, but the festival, presented by a Mesa-based nonprofit called Cultural Coalition, is a perfect opportunity to explore the wider historic prevalence and significance of masks in myriad cultures. Lynn Trimble Are you ready for some football? The Arizona Cardinals certainly hope so, since they’ll need plenty of fan support during what’s expected to be a tough season. The NFC West is one of the most competitive divisions in the NFL, particularly with such perennial contenders as the Los Angeles Rams, Seattle Seahawks, and San Francisco 49ers vying for supremacy. The Cardinals (1-0) are already off to a good start, having dominated the Tennessee Titans during Week 1, but third-year quarterback Kyler Murray (who threw for 289 yards and landed four touchdowns) and the rest of Arizona’s offense will have to continue to be golden all season if the team has any hopes of making the playoffs. Next up are the Minnesota Vikings (0-1), who visit State Farm Stadium, 1 Cardinals Drive in Glendale, on Sunday, September 19, for Arizona’s home opener. The Red Birds are favored, but the Vikes won’t be as much of a cakewalk as the Titans. Kickoff is at 1:05 p.m. Tickets are $72 to $443. Benjamin Leatherman
KEEP PHOENIX NEW TIMES FREE... Since we started Phoenix New Times, it has been defined as the free, independent voice of Phoenix, and we'd like to keep it that way. With local media under siege, it's more important than ever for us to rally support behind funding our local journalism. You can help by participating in our "I Support" program, allowing us to keep offering readers access to our incisive coverage of local news, food and culture with no paywalls.
Make a one-time donation today for as little as $1.