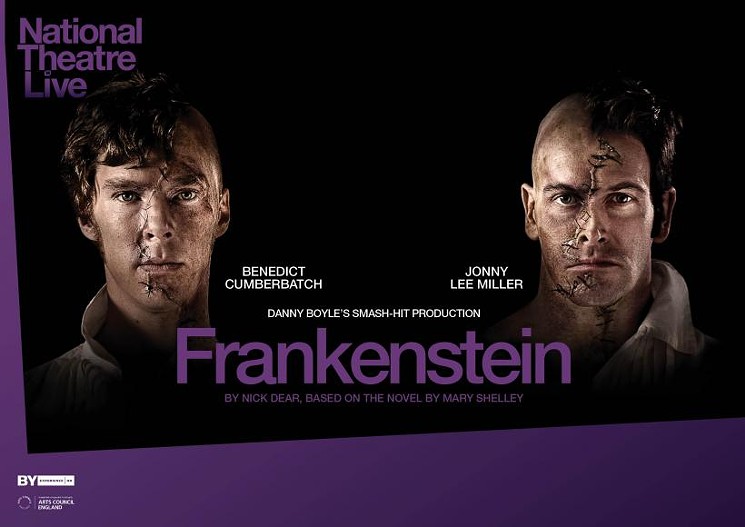 When Benedict Cumberbatch and Johny Lee Miller took to a London stage in 2011 for the National Theatre production of Frankenstein, they played to sold-out crowds. Danny Boyle, whose other credits include Trainspotting and Slumdog Millionaire, directed the production, in which the actors alternate playing the lead roles of the so-called monster and the man who created him using body parts of dead people. National Theatre filmed the production for its National Theatre Live series, which means you can still experience their riveting takes on these classic roles. Mesa Community College, 1833 West Southern Avenue, Mesa, is screening National Theatre Live: Frankenstein at 7 p.m. on Friday, August 20, inside the MCC Theatre. Tickets are $15. With issues like climate change, war, immigration, and public health at the forefront of political rhetoric, it’s the perfect time to revisit this tale of the horrors wrought by hubris. Lynn Trimble

If you’re a fan of the WWE, you probably love to hate Roman Reigns. The current, reigning, and defending Universal Champion and “Head of the Table” is a cruel, arrogant, and entitled heel who rules over the company’s weekly Friday Night SmackDown show like a mob boss and feels like the world (and the WWE’s fanbase) owes him their gratitude. In other words, feel free to boo the bastard when the latest episode of SmackDown is broadcast from Footprint Center, 201 East Jefferson Street, on Friday, August 20. Reigns’ ongoing feud with WWE legend John Cena, who is also scheduled to appear, will be a focus of the program, which leads into the annual SummerSlam pay-per-view later this weekend. The latest storyline developments involving Shinsuke Nakamura, Baron Corbin, tag team champs Rey and Dominik Mysterio, and others will also be featured. The wrestling action starts at 4:45 p.m. Tickets are $20 to $65. Benjamin Leatherman

To paraphrase the late Freddie Mercury, Queen concerts weren’t supposed to be live renditions of their songs but instead were meant to be more theatrical events. Fittingly, the performers behind the Killer Queen Burlesque Show will embody this over-the-top spirit when they present a rock bacchanal mixing the legendary band’s music with plenty of spectacle and ecdysiast thrills on Friday, August 20, at The Duce, 525 South Central Avenue. There won’t be any dynamite or laser beams, but local musician Brandon Ridolpho will portray Mercury while a band plays Queen’s hits and burlesque dancer Monica Alexandra, aerialist Michelle Milan, and fire artist Jen Burden Blossom perform. The show starts at 10 p.m. General admission is $45 and VIP options, which include dinner and premium seating, are $75 to $130. Tickets and more info are available here. Benjamin Leatherman

Local bands tend to come and go, but the misfits of Dephinger have stuck around the Phoenix scene for more than two decades. When the scum-rock band formed back in 2000, their M.O. was to “basically to get as wasted as possible and suck” while playing bastardized arena rock badly and spewing lyrics that would make GG Allin blush. Dephinger’s changed things up over the years (including switch over to more of a punk sound, undergoing some lineup changes, and taking the occasional hiatus) but still have a yen for performing loud, fast, and obnoxious rock. They do so again during Phinger Phest on Friday, August 20, and Saturday, August 21, at Chopper John’s, 2547 East Indian School Road. Dephinger will headline both nights of the event, which will also feature sets by Phoenix Hooker Cops, Quantum Colossus, Sewer Gap, Loserfur, The Declaimed, Psycloptopus, Bee Keeper, and TV Tragedy. The music starts at 9 p.m. and admission is free. Benjamin Leatherman

Most people walk into art museums and galleries assuming that all the creativity in their midst is hanging on the walls around them. But exhibitions showing works by staffers, which happen periodically at places like Phoenix Art Museum, reveal that people working behind the scenes often spend time off the clock making their own works of art. Case in point: The new “Off the Clock” exhibit at Vision Gallery, 10 East Chicago Street, Chandler. The gallery is showing artworks by more than two dozen city employees, including Peter Bugg, Cynde Cerf, Savana Martinez, and Michaal Winer. Collectively, they work for 11 city departments. But here, you’ll get to see the art they bring to life on their own time. Like other exhibitions the gallery has presented thought the years, the show includes a fascinating diversity of medium, subject matter, and style. Admission is free. Be one of the first to give it a good look on Saturday, August 21, when Vision Gallery hours are 10 a.m. to 4 p.m. Then remember, next time you’re at a local gallery or museum, that the people you sometimes take for granted just might be among the Valley’s many talented emerging artists. Lynn Trimble

Pam Morita will be part of this week's jam session at The Nash.
The Nash

The Nash, 110 East Roosevelt Street, has been bringing live jazz performance and jazz education to metro Phoenix for many years now, delivering a steady lineup of offerings for everyone from jazz diehards to the merely jazz curious. On any given day, you might get to hear a renowned jazz artist or see how music students are bringing their own flair to the local jazz scene. If you favor casual encounters with jazz, check out their Jam Session series on Sunday nights, when professional and student musicians play together unrehearsed, just letting the music happen. Jam Session: Pam Morita happens from 6 to 10 p.m. on Sunday, August 22. Tickets are $10. While you’re out and about, you can explore other offerings in Roosevelt Row, where walking just a few blocks will reward you with murals by some of the region’s best-loved artists. Lynn Trimble