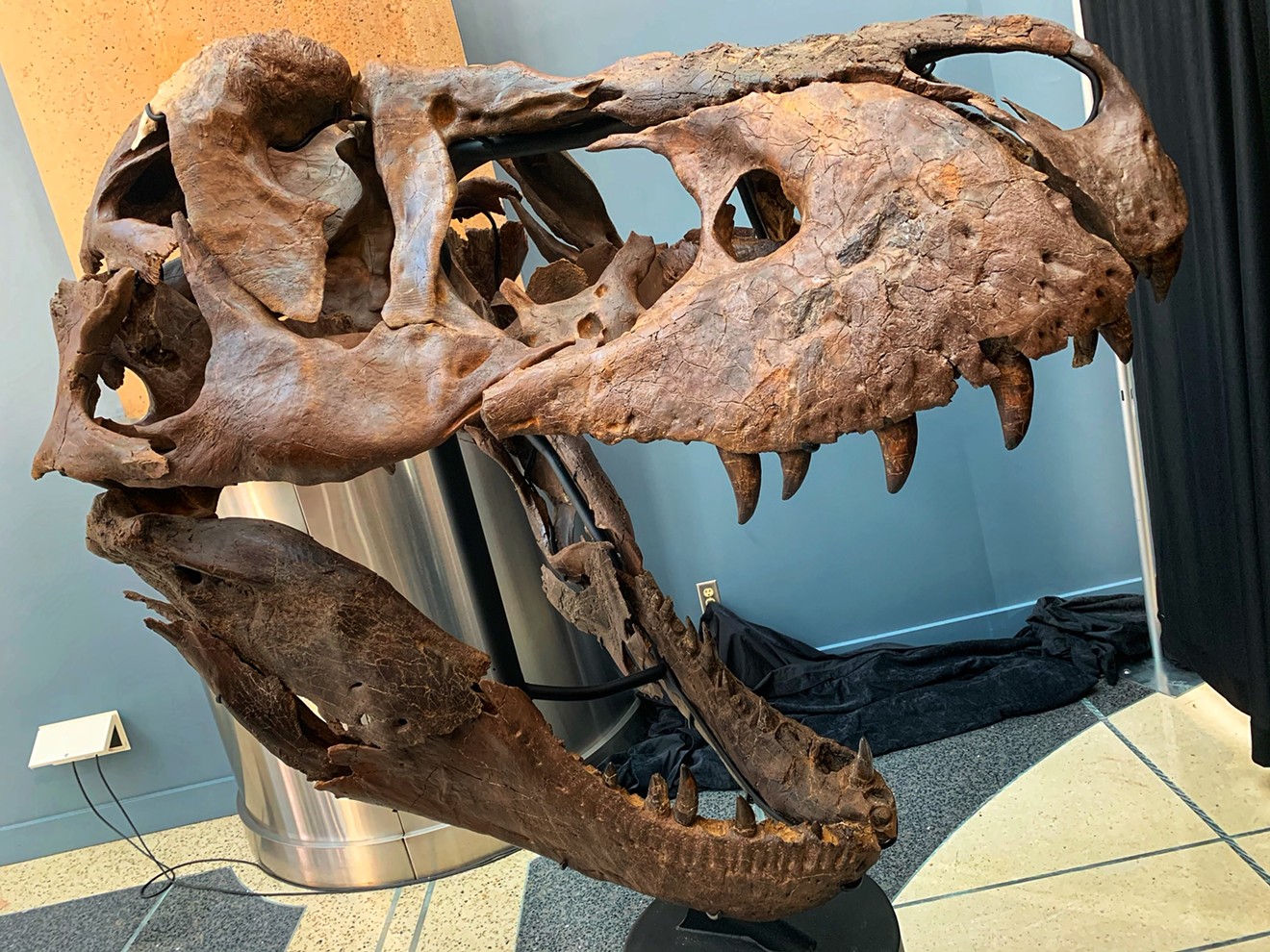 Victoria the T. Rex visited Phoenix City Hall last week. Robrt L. Pela
It was Thursday morning, and Sari Custer stood and stared at a giant dinosaur skull tucked behind a curtain in a corner of Phoenix City Hall.

“She’s so pretty,” Custer said, then apologized to a man standing next to her. “I’m sorry. I’m giddy with excitement that she’s here.”

The man nodded. “She arrived in a crate, in pieces and parts,” explained Custer, who’s the chief scientist at Arizona Science Center. The dinosaur’s name is Victoria, Custer went on. Victoria’s head had been assembled here at City Hall for a press conference. Later, she’d be disassembled and reassembled at the science center along with the rest of her skeleton and a special exhibition that would be up until Memorial Day.

A pile of neatly stacked cards on a nearby table referred to Victoria’s visit to Phoenix as her “global debut.”

“That’s because she’s never been anywhere before,” a man to Custer’s left said. This was Terry Ciotka, owner of Dino Lab, Inc., the Canadian fossil gallery and dinosaur prep lab that restored Victoria. “She went from Faith, South Dakota, where she was found, to Victoria, British Columbia, where she was processed. But she’s never had a public viewing.”

Some visitors to City Hall peeked behind the muslin curtain that hid Victoria’s skull from view while Ciotka and Custer compared notes on favorite dinosaurs.

“Mine right now is the T. rex,” Custer said, “but it used to be the Therizinosaurus.”

“Oh, with the big long claws,” Ciotka said. “Yes! I’m impressed that you like that.”

He had always loved dinosaurs, admitted Ciotka, who founded his company 25 years ago. He had never dreamed, he said, of rebuilding and researching dinosaurs for a living.

It was one of Ciotka’s employees who suggested the name Victoria for the T. rex, whose bones Dino Lab spent more than two years reassembling. “We were in Victoria, B.C., prepping her, and Victoria is a royalty sort of name,” he offered. “A lightbulb went off. I called her owners and said we had to name her Victoria, and we could call her the Queen of the Cretaceous. They loved it.”

Victoria was the second-largest T. rex ever found, and the largest to tour. A larger T. rex named Sue had never hit the road, sitting instead in a Chicago museum.

“In our exhibition, people don’t just meet Victoria,” Custer reminded Ciotka. “They can create a hologram of her because our team created a program that lets you design your own version of what Victoria looked like, based on scientific evidence. So, she might have eyelashes or feathers, or her color might be different, depending on what you come up with for her.”

“That is so cool,” replied Ciotka. “Usually, you only get to see dinosaurs in movies, and they don’t always get the facts right.”

Custer groaned in agreement. “Like they have people and dinosaurs existing at the same time.”

“Only a 64-million-year gap there,” Ciotka said, then rolled his eyes. “Cavemen weren’t hanging out with dinosaurs. They didn’t domesticate dinosaurs. Can you imagine a T. rex going for a walk on a leash?”

Custer smiled and shook her head.

“We learned a lot about Victoria while we worked on her,” Ciotka said. “She had a lot of battle injuries. Three of her neck vertebrae are fused, so she had a broken neck, which is a big problem, because how do you hunt or bend down to eat with a broken neck? How do you support that massive head?”

Both of Victoria’s jaws had been badly infected at one point. Ciotka thought this could have led to her death, though no one could be certain. Only Victoria knew why she died in South Dakota.

“For me and my staff, there was a huge emotional relationship with Victoria,” he said. “We worked on her every day for two and a half years. Paleontologists would come and talk about her with us. Then once she’s fully mounted and standing in front of you, it’s extremely emotional.”

It was difficult, he confided, to pack up Victoria and ship her off to Phoenix. “I was sad. She’s a big part of your life, and then all of a sudden, she’s gone. But once I got to Phoenix and saw what they’re doing with her at the science center, I got really happy. This exhibit is amazing.”

“I’m so excited that our community gets to see Victoria, to make their own memories with her,” Custer said.

“Don’t cry!” Custer said to Ciotka. And then they both turned and smiled at the big, bony head of Victoria, Queen of the Cretaceous.
KEEP PHOENIX NEW TIMES FREE... Since we started Phoenix New Times, it has been defined as the free, independent voice of Phoenix, and we'd like to keep it that way. With local media under siege, it's more important than ever for us to rally support behind funding our local journalism. You can help by participating in our "I Support" program, allowing us to keep offering readers access to our incisive coverage of local news, food and culture with no paywalls.
Make a one-time donation today for as little as $1.