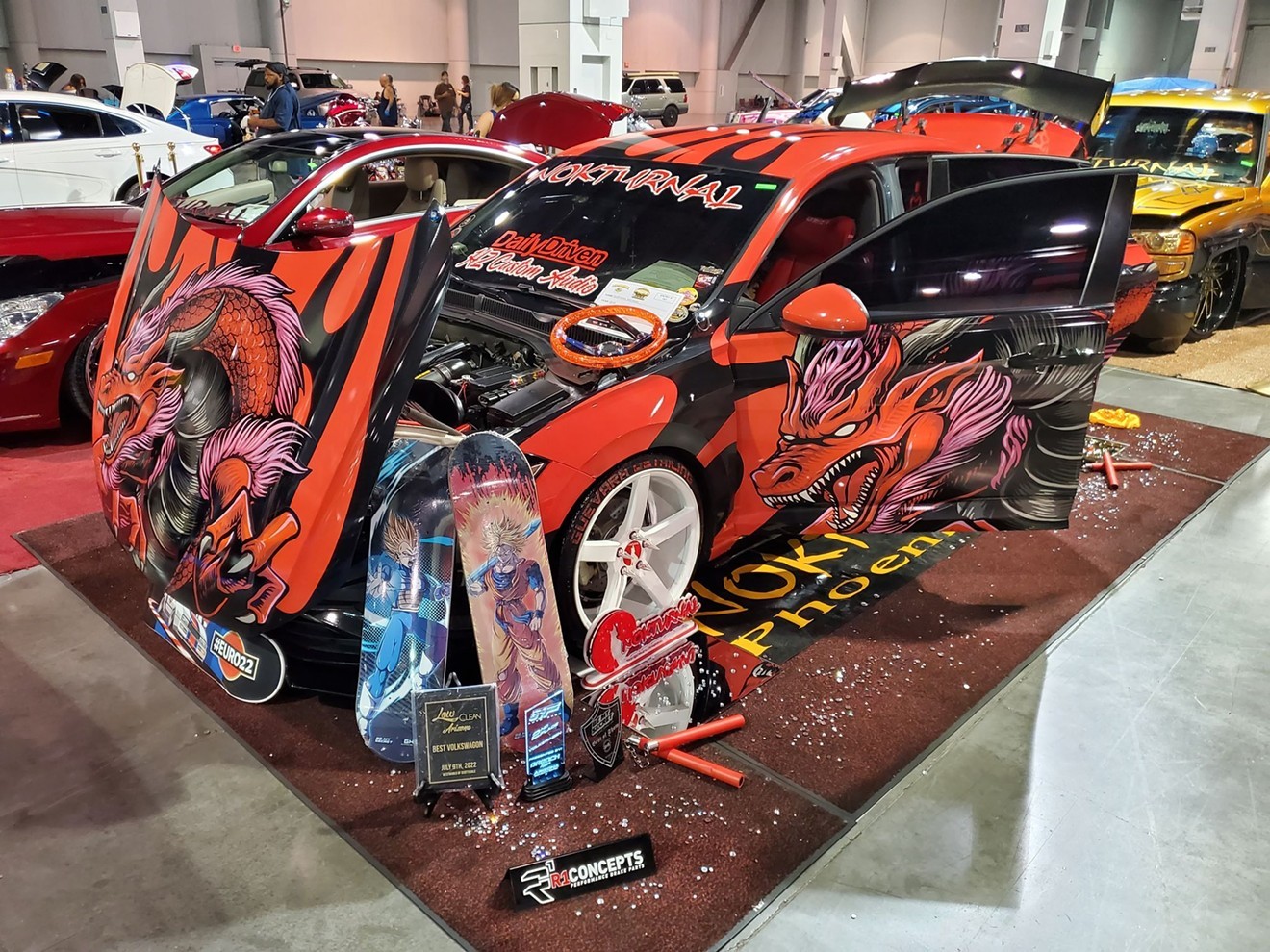 At the last Import Face-Off car show, Guevara's Volkswagen Jetta won the best Euro, stereo install, interior, wrap, and quality awards. Michael Guevara
It's been about 20 years since 2 Fast 2 Furious hit the silver screen, and the act of drifting came into the public consciousness. The automotive sport, where high-horsepower vehicles burn rubber around street courses, has since evolved into an art form.

On January 22, local drifters will duke it out at Wild Horse Pass Motorsports Park in Chandler at the Best of Phoenix drift competition by VegasDrift.com, as part of the Import Face-Off car show.

Drifting, where the cars slide around curves at high speeds, may appear reckless and out of control. But, it's quite the contrary.

Drifting is a complex technique. The driver of a manual transmission and rear-wheel-drive car purposely takes a hard turn, oversteering. The vehicle maintains its speed throughout a relatively circular motion as the driver applies the right amount of pressure on the throttle, rapidly pushing the clutch in and then releasing it quickly. As the car's weight shifts, the rear tires break loose, losing traction, and continue spinning and burning rubber as the vehicle drifts. Then, as the driver comes out of the turn, they straighten out the steering wheel momentarily, repeating the process, power sliding into the following successive sets of curves. At the last Import Face-Off car show, Guevara's Volkswagen Jetta won the best Euro, stereo install, interior, wrap, and quality awards.
Michael Guevara
From particular vantage points, it's as if the cars, primarily when a few drifters compete in tandem, appear mimic synchronized vehicle dancing — or art in motion. This Sunday's drift competition is for intermediate drivers, and it's a tandem-style drift competition.

In competition, the drifters are judged on how eloquently their drifting routines through the race course are performed — without crashing into the walls, orange-colored cones, or into one another.

Michael Guevara from north Phoenix is a drifting fan, especially if the drifters are driving right-hand-drive vehicles imported from Japan, as seen at last year's Import Face-Off car show and drift competition in Chandler.

"[Many] people don't know about right-hand-drive drift vehicles and are usually shocked because it's not common in this country," Guevara says. "Right-hand-drive cars are either fully built or transported from overseas."

"Usually, drifters will be itasha cars, and some in the car show itself," Guevara adds.

The itasha he refers to is a mixture of the anime — Japanese-based cartoons — and the automobile-tuning lifestyles. It's when drifters and auto customizers put large sticker decals of their favorite anime characters on their rides.

Guevara owns an itasha-style Volkswagen Jetta, although it's not a drift vehicle. He calls his super-customized German car The Red Dragon. At the previous Import Face-Off car shows, it won the best Euro, stereo install, interior, wrap, and quality awards.

His 2019 VW is wrapped with dragon graphics in reflective vinyl material, has a tilted hood, and 19-inch white-colored and gold-flaked Vossen wheels.

Many itasha-style vehicles, right-hand-drive racecars, and drift cars will be present on Sunday.

"Import Face-Off is not just an ordinary car show," Guevara concluded. "It's a car show; a drag racing, drifting, 2-step, limbo, and audio competition with models and vendors throughout the event. Keep in mind all of these activities are happening simultaneously."

Best of Phoenix drift competition. 9 a.m. to 6 p.m. Sunday, January 22. Wild Horse Pass Motorsports Park, 20000 South Maricopa Road, Chandler. Children 10 and under are free; $25 spectators; $30 to $35 to compete in the car show; $50 to drag race on a 1/8 mile track; $130 to compete in the drifting competition.
KEEP PHOENIX NEW TIMES FREE... Since we started Phoenix New Times, it has been defined as the free, independent voice of Phoenix, and we'd like to keep it that way. With local media under siege, it's more important than ever for us to rally support behind funding our local journalism. You can help by participating in our "I Support" program, allowing us to keep offering readers access to our incisive coverage of local news, food and culture with no paywalls.
Make a one-time donation today for as little as $1.