Your Guide to Mad Monster Party Arizona 2021 in Glendale

An attendee of Mad Monster Party Arizona in 2018. Benjamin Leatherman
Like a slasher flick villain returning from the grave for another sequel, Phoenix’s con season will make its comeback from a lengthy hiatus starting this weekend. This year’s Mad Monster Party Arizona is taking place in Glendale from Friday, July 2, to Sunday, July 4, offering Valley residents the chance to geek out in public.

They’ll be geeking out over the horror genre at the three-day event celebrating all things spooky and scary – ranging from movies and television shows to video games and literature. Mad Monster Party Arizona, which has taken place in the Valley since 2014, features vendors, special guests, activities, cosplayers, and programming.

Kevin Blanchfield, one of the organizers of Mad Monster Arizona, told Phoenix New Times in 2016 that the con is aimed at all kinds of horror aficionados, regardless of their obsession level with the genre.

“There are the guys that are die-hard horror fans that will come out in droves and the more casual fans who just know who Jason Voorhees is,” Blanchfield said. “We cater to both crowds. There are some people who just love horror. They love every element of it, and it's not just about being scared.”

While horror fandom takes center stage at the con, it's not all ghosts, goblins, and masked serial killers, though, as there will also be guests and content for people into science fiction, fantasy, and other subject matter.

“It's about all kinds of genres,” Blanchfield told New Times in 2016. “The majority of the event is about horror but we try go across the board and include a lot of pop culture and rock ‘n’ roll stuff as well. We try to reach out to everyone."

That’s while Mad Monster attendees will see genre-straddling actors and actresses like PJ Soles (who starred in cult classic Rock ‘n’ Roll High School and the first Halloween flick), James Remar from Dexter and Mortal Kombat: Annihilation, and Mark Sheppard (who’s been on both Supernatural and Doctor Who).

What else will you encounter at this year’s Mad Monster Party Arizona (besides lookalikes of Freddy Krueger and a multitude of lifelike horror props for sale)? We’ve put together a guide to the event with everything you’ll need to know before attending, including what to wear, who to see, and what COVID-19 safety rules will be in place. 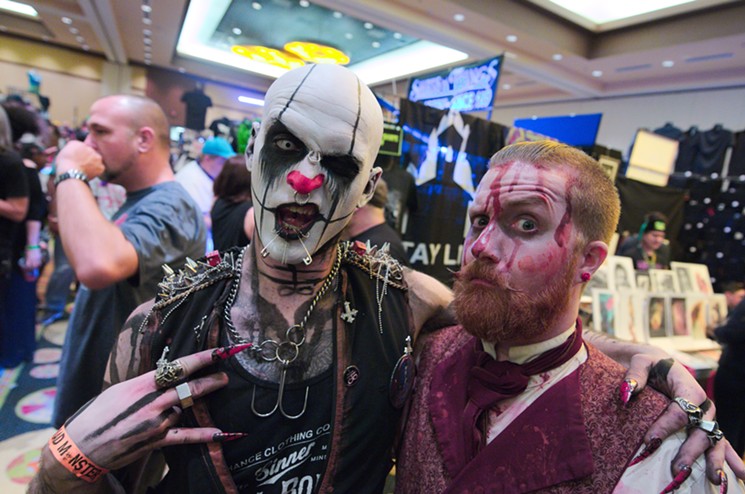 When and Where is Mad Monster Party Arizona 2021?

The con will run from Friday, July 2, to Sunday, July 4, at the Renaissance Phoenix Glendale Hotel, 9495 West Coyotes Boulevard in Glendale.


What Are the Event Hours?


How Much Are Tickets?

Single-day general admission for Friday or Sunday is $35 at the door and $45 at the door for Saturday. If you’d like to attend all three days, a “shriekend” pass is $90 at the door. (Note: Tickets can only be purchased with cash.) Kids 12 and under can get in free if they're accompanied by a paid adult.

Also, if you want to get a picture with a special guest, photo ops will range in cost from $50 to $200, depending on which celebrity is involved.

Nope. It's an all-ages event and anyone is welcome. Keep in mind, the con focuses on the horror genre and subject matter that might be too much for younger attendees. Discretion is also advised for certain after-hours programming events (like the MADame Monster pageant) which might get a little risque.


How Do You Get There?

The hotel is next to Westgate Entertainment District near Maryland and 95th avenues. If you’re coming by car, take either the north or south Loop 101 in the west Valley to the Maryland Avenue exit and then head east. Valley Metro offers bus service to Westgate via route No. 70.


Where Can I Park?

Westgate has free parking with thousands of spaces within a short walk to the Renaissance. It’s typically busy on the weekends so you might have to hunt for a spot, so you might want to arrive earlier in the day to get as close as possible. The hotel also offers parking in its multi-level structure for $10 a day.


Will There Be COVID-19 Safety Rules?

Yes. Masks covering both the nose and mouth must be worn at all times except in designated eating and drinking areas. (You can also take them off for photo ops with special guests, which will have a plexiglass divider between you and them.) Other measures will include hand-sanitizer stations, temperature checks upon entry, and extra-wide aisles in the dealer room (which will be one-way only) with booths being spaced out a significant distance.

What Vendors Will Be There?

More than 50 different vendors of a geeky and horror-minded bent from around the Valley and throughout the Southwest will be set up in one of the Renaissance’s ballrooms. The list includes Blood Bound Books, Cardiff Giant Tattoo, Pallbearer Press, Shirts 'n' Things, Creepy Collectibles, Scrooze Toys, The Severed Head Shoppe, Hollywood Joe's Memorabilia, and Nerd Dollz. Multiple tattoo studios and artists will also be slinging ink at the event.

What Sort of Food and Drink Options Are Available?

For starters, the hotel has a fast-casual cafe called Ray's and the more upscale restaurant Soleil. Meanwhile, Westgate features more than two-dozen eating and drinking establishments, ranging from burger joints and brewpubs to sushi spots, sports bars, and even a cereal and milkshake place. A handful of fast-food options are also nearby. Attendees can also meet and get photos with Terry Kiser (Bernie from Weekend at Bernie’s), character actor Pruitt Taylor Vince, and Susan Backlinie, better known as the first victim from Jaws.


What Sort of Programming Is Planned?

Many of Mad Monster's special guests will participate in Q&A sessions throughout the weekend. A few will team up for themed panels, like one on Friday with Tom Morga that’s dedicated to the Friday the 13th Part V while Skeet Ulrich, Matthew Lillard, and Jamie Kennedy will discuss the first Scream film on Saturday. (The full schedule of panels can be found below.)


What are the Nighttime Events?

The MADame Monster pageant at 8 p.m. on Saturday evening with "Scaraoke" sessions at 11 p.m. on Friday and Saturday nights.

They make up three-fourths of the Mount Rushmore of slasher villains.
Benjamin Leatherman

Of course. Like other cons or geek events, cosplay is a big thing at Mad Monster. Organizers encourage it and a large portion of attendees will be wearing a costume inspired by the horror genre and other nerdy subject matter and pop-cultural franchises. A costume contest is also planned for Saturday night at 7 p.m. with $500 in cash prizes and free green-screen photo ops will be available on Sunday for cosplayers.

That said, organizers ask that you don’t get too risque with your costuming as children and families will be at the event all weekend.


What Else Should I Bring?

You’ll be doing a lot of walking, so comfortable shoes are a must. Beyond that, you’ll want to have a bag or backpack for whatever swag, merch, or collectibles you’ll purchase at the event, as well as a fully charged cellphone, some cash, a government-issued ID, and maybe a bottle of water or two.

Activities will be happening throughout Mad Monster Party Arizona's three-day run. Here's a complete rundown of what's in store for the con.