We're the first to admit that dating sucks. Usually it's a waste of time; almost always it's a waste of money when we find out the person across the table from us at dinner should have warned us he or she was a vegetable, not a vegetarian.

There are several reasons we like to test our potential partners with a meal at L'Academie, an important one being the rock-bottom prices. This is a learning restaurant for students of the Scottsdale Culinary Institute, so the trade for our being guinea pigs is a low bill. Appetizers for $2.95. Entrees for $8.95. Desserts for $2.95. At these prices, even if our date is a washout, it won't leave us washing dishes in the kitchen.

We also like to use L'Academie to see how our date deals with potential mishap. Students haven't honed their server skills quite yet, but if our date has a meltdown over minor blips, we know we haven't met our true love.

It helps that the setting is high-class bistro, and the food is really tasty (spinach salad, prime rib, leg of lamb, bread pudding). So, if by chance our date turns out to have potential, we still look good in their eyes. 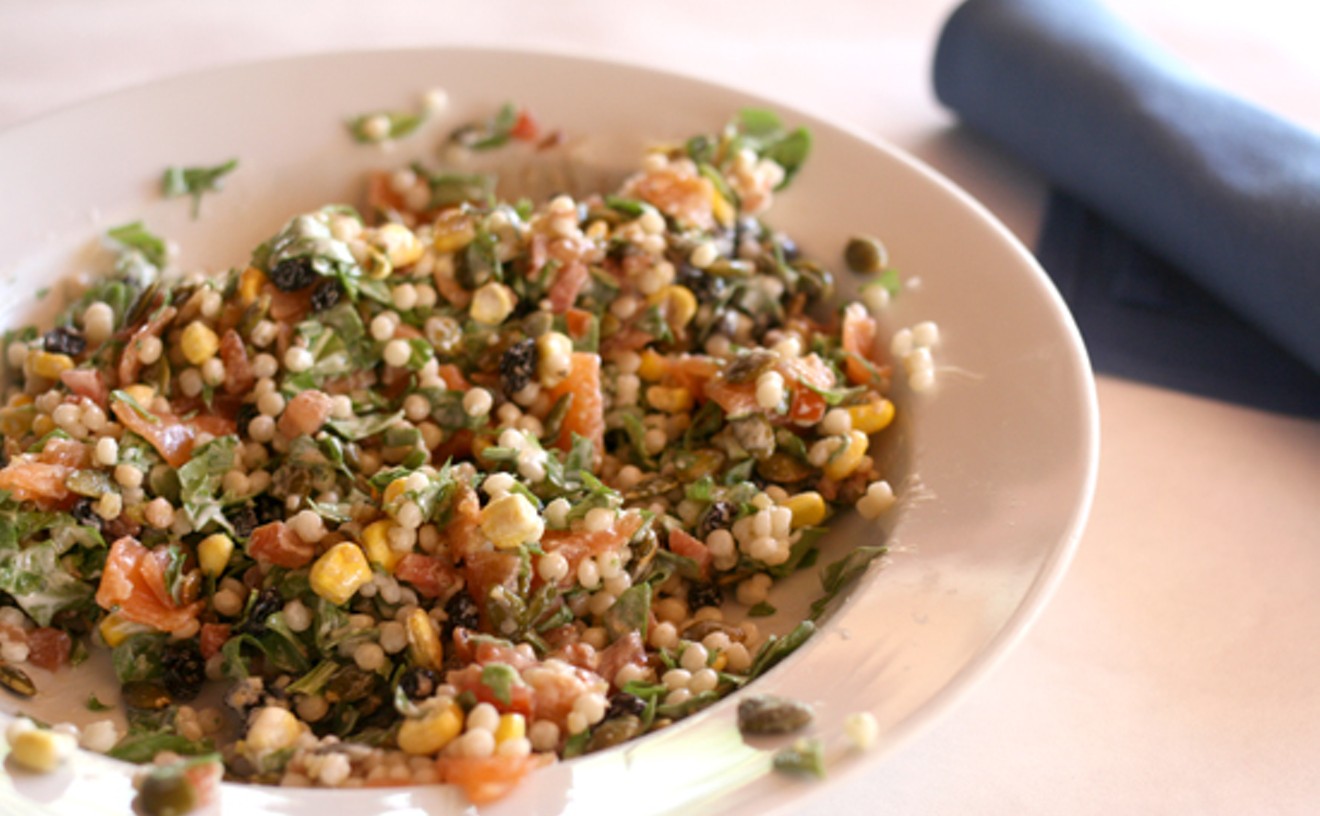 Heather Hoch
Like all our great Valley restaurants, Cowboy Ciao changes its menu on a regular basis, all the better to keep us interested in its creative cuisine: modern American food influenced by the flavors of Italy, the Southwest and Mexico. But we can always count on something special, manly and cowboy charming. Sometimes it's pesto-crusted elk loin, the strip grilled medium rare and served with pan-grilled vegetables, polenta and Cabernet wild and exotic mushroom ragout. Buffalo carpaccio makes a regular appearance, rolled in a cumin-espresso dry rub, seared, then paired with red onion honey marmalade and chèvre. We find favor with braised duck breast, too, two breasts with poblano mole, chile grits and black currant relish. And the crab-crayfish cakes keep us coming back for more, ladled in smoked red pepper-lobster cream. It's always exciting to come in, flip open the menu, and see what's in store for us at our favorite CC.

Why anyone would want to ruin an evening out by bringing along screaming little monsters who appreciate good food only if they can throw it, we'll never know. Haven't these people heard of baby sitters, or at least closets with locks?

Which is why, if kids must be part of the equation, we appreciate Pei Wei. It's already deafeningly loud, so a few more decibels won't matter. It's ultra-casual, so chucking food isn't too much of an embarrassment. And it's cheap, $5.50 to $9 for a full adult meal, plus just $3.25 for the little ankle-biters. While adults can fill up on P.F. Chang's-style coconut curry shrimp, spicy chicken chow fun, chili-hoisin beef or Mongolian scallops, the rug rats can stuff themselves on a Kid's Wei meal.

Pei Wei doesn't bother with any vegetables (just more artillery, since kids won't eat the stuff). The basics include teriyaki, honey or lo mein chicken on top of egg noodles. Simple. No nonsense. Enough carbs to ensure the kiddies will pass out on the car ride home.

If we had it our wei, kids wouldn't be allowed in restaurants until they could behave politely when released from their cages. In the meantime, we'll feed them at Pei Wei. 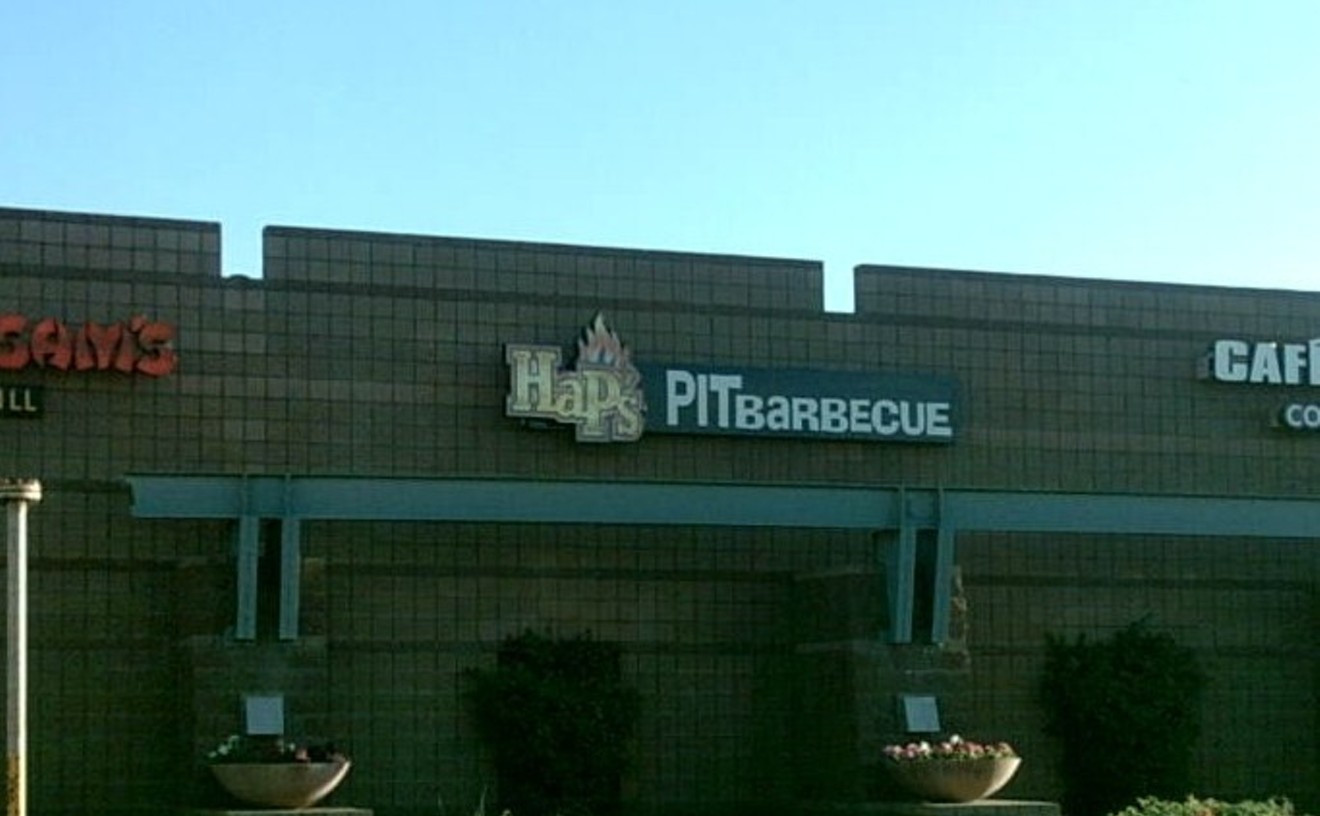 We've been fans of Hap's slow-smoked 'cue for more than a decade, since the place started as a cart in front of a family car dealership in south Phoenix (the smoker was the frame from an old GMC truck). This has been a long love affair for us, drawn in by meat that's meltingly tender. This comes from long slow cooking, over low heat, following a loving massage of a special blend of spices and herbs. Sauce is spectacular, but it only gilds the lily.

Not the language, but the cuisine. Sure, we could be cynical and say that the classes are basically infomercials to promote Bosch kitchen appliances. But who cares? The seminars are free (periodically there's a small fee, like $5), and the information is valuable.

Their lesson plans span the globe. There might be an evening in Vienna, with Wiener schnitzel, spaetzle with pepper and crisp shallots, braised cabbage with bacon, and apricot crepes. It might be a menu of 10-minute meals featuring (surprise) name-brand pressure cookers. It might be American, Southwestern, Mexican or vegetarian. There's a lot of bread baking, with (who'd have guessed) Bosch bread-making machines. But it's free! Consider it a Tupperware party with a 'tude.

Who wants to eat hamburger every day? There's a big, exciting world of exotic animals out there, just begging to become part of our dinner. Antelope, rattlesnake, alligator, zebra and lion we've heard of people eating before, but since when did species like giraffe, beaver and kangaroo become popular? Leave it to game cravers to get creative -- owners Daniel and Jennifer Roosevelt can get their hands on more than 50 types of mysterious meat given a week's notice. They'll also process game from private hunters, and the Arizona BBQ Association (home of the eight-foot-tall inflatable pig) hosts get-togethers at Daniel's to spread the passion.

We're envisioning a theme dinner party -- the Valley's own version of the Matthew Broderick/Marlon Brando movie The Freshman.

We wish Circle K could catch up with the times. Sure, once we convenience shoppers were a crowd craving beef jerky, soda and slushies, maybe a six-pack of Schlitz. But these days, we'd rather spend some extra time going into a real store for real quality deli noshes, fine wines and service from someone older than minimum age. Still, it's a pain to fight the crowds at the big shops.

La Crème is the top of the crop for us.

Imagine being in a grocery store check-out line with a cart chock-full of fancy-schmancy foods: a chunk of French cheese, a bag of exotic baby greens, some imported olive oil, a fresh slab of herb focaccia, Belgian chocolates and an assortment of attractively packaged, luxurious and completely unessential items, like sea salt body scrub and almond-scented soap. Now imagine the clerk ringing up everything and telling you the total. Is it a ridiculous amount of money? Do you choke and reach for the plastic? Well, maybe if you envisioned yourself in a typically pricey gourmet store. But if you were thinking of shopping at Trader Joe's, the tally is surely more manageable . . . maybe even cheap enough to imagine throwing in a bottle of Merlot and a bouquet of calla lilies, too!

Long considered by Asia to be a boon from the gods, tea is now supposedly being recognized by modern science to contain a treasure trove of health-giving and health-maintaining properties. So says Akbar's promotional literature. What do we know, except that it's what we love to drink crystal cold on ice during the summer, and vapor cloud hot during the winter.

Nobody has the seductive selection that Akbar's does, imported loose teas from all over the world, complete with Chatsford tea pots, tea accessories, gift baskets, tins and bags. Every variety we could want is available: black teas of China or India, green teas, oolong teas, blended teas, flavored teas, herbal teas. Essentially, anything leafy and lovely that can fit in a cup can be found here.

AZ Wine Co. is one of our favorite places to explore wines. With some 20,000 bottles, it's the largest wine shop in Arizona, but the folks here aren't hung up on snobbery. Here, the attitude is relaxed, and the wines remarkably well-priced. We never feel intimidated as we wander concrete floors lined with long, collapsible tables topped with box after box of wines from around the world. The box tops are ripped off to expose slender bottle necks, the prices are scrawled on the cardboard in Magic Marker and, on some boxes, there might be someone's handwritten comment: Great!

The Wine Co. offers free tastings several nights a week, with us relaxed at the cozy bar or kicking back on one of the front-porch-style sofas and chairs clustered in a cradle of boxes. Pretty much any varietal we crave is in stock, but on a night that AZ Wine is out of our preferred Newton Claret, the proprietor suggests Catena, a 2000 Malbec from LunLunta Vineyards of Argentina. It's stunning, with intense aromas of ripe blackberry interlaced with vanilla and tobacco, and just what we wanted. For wines, that's as good AZ it gets.