We're counting our blessings that Sarah Wolter wound up impersonating '70s-era Cocaine-and-Leotards Liza Minnelli, rather than, say, '80s Post-Rehab Pet Shop Boys Liza, or New Millennium Married To A Scary-Looking Homosexual Liza. But still, the truth is that Wolter didn't so much play Sally Bowles in Phoenix Theatre's messy and ultimately dull Kander and Ebb rerun as she did impersonate Minnelli's performance in the film version of Cabaret. Okay, so Wolter nailed every one of Minnelli's odd facial twitches and limp-wristed stances from the movie, but if we wanted female impersonation, we'd head over to Pookie's. Wolter's Liza impersonation didn't make us want to put down the knitting, the book and the broom so much as it made us want to go home and play our Liza With a Z! album.

Once upon a time, a guy named Steve Almond (really, that's his name) wrote a book about chocolate. He traveled to candy factories all over the country, cataloguing his funny experiences and funnier insights in Candy Freak, an odd but compelling memoir that became a smash hit.

This is a man who has spent a great deal of time lamenting the existence of the white chocolate Kit Kat. Almond came to town to promote his new collection of short stories (his true passion, next to chocolate -- although, sadly, short stories apparently don't sell as well as chocolate stories, even if the former includes many mentions of oral sex) and an idea was hatched: What if someone designed a piece of chocolate to Steve Almond's very picky specs? Almond was game (who wouldn't be?) and offered his blueprint for the dream piece of chocolate: caramel infused with dark chocolate and cinnamon with Rice Krispies and a dark chocolate shell.

That was no problem for Colin Redding, who works for his family's business, Granny's Chocolate Creations, a real chocolate factory in Gilbert. Almond came to town and read both his oral-sex-laden stories and some bits from Candy Freak, then everyone tried the Steve Almond, which you can try at Granny's or in a "book of chocolates" for sale at Changing Hands Bookstore in Tempe. Here's what Almond himself had to say about the candy, later:

"It's a TONGUEGASM. I LOVE how the cinnamon infusion blooms on the tongue, the soft, buttery texture of the caramel as it plays against the dark chocolate. . . . It's unstoppable. Like licking the brownie bowl and having tantric sex, all at once."

Guess he liked it. 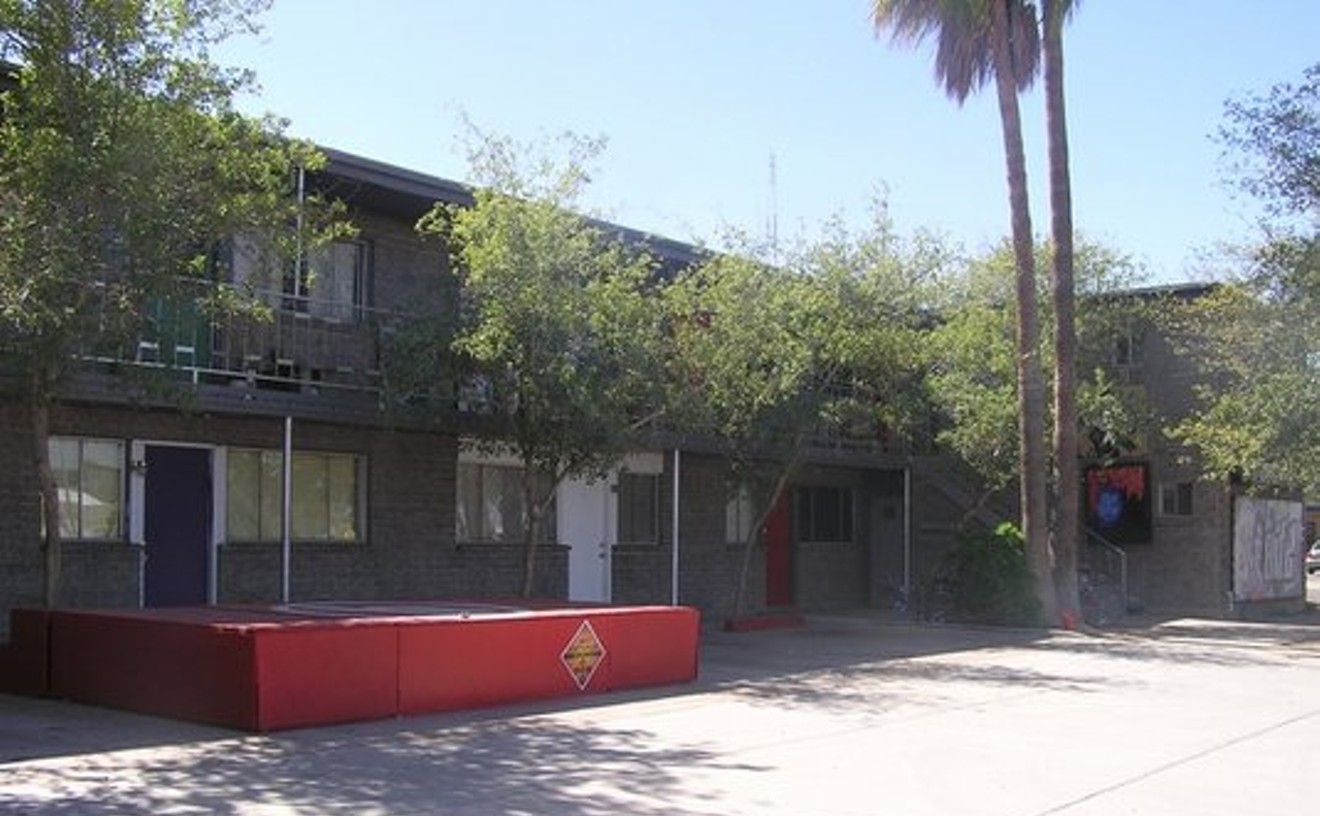 If nothing else, Angela Pulliam and lesbian burlesque troupe Lezbos-A-Gogo prove that even girls who just love girls can appreciate a good wiener from time to time -- as evidenced by the hot dog stand the lusty ladies run every First Friday from 7 to 11:30 p.m. outside Holga's, a popular art house/apartment complex just off Roosevelt Row. As if hot girls who dig hot girls serving up all-beef plumpers weren't enough, Pulliam offers patrons the "Horny Dog" combo -- a voluptuous hot dog with all the fixin's, chips and a drink for just five bucks. But, as Pulliam says, "It ain't our hot dogs! It's our buns!"

Feeling guilty because you downed that Colorado pork stew with a little too mucho gusto? Head for the ladies' room. No, not to stick your finger down your throat. Look around, girlfriend. You're in good company. The stout figures adorning the walls are repros of the work of Fernando Botero, the Colombian artist who made his name painting chubbies. Even the mirror is pointed upward, so you can get a good glimpse of your face but skip your thighs. See, you look great! Go have dessert.

BEST PLACE TO FLIP OFF THE BIRD

Most every day, at the intersection of Central and Indianola avenues from about 8 a.m. until 1 p.m., you'll find a rabid, dancing, human-chicken hybrid spazzing out in hopes of luring us into nearby Le Peep Restaurant. The masked bird, decked out in a mismatched yellow tee shirt, shorts and a giant costume chicken head, has been shaking its tail feathers on this spot for the past three years. We've only been made privy to some of the scoop on this vainglorious bird, but we do know that two different men share the chicken run, one of them more nonchalant in his coaxing waves, the other so hyperactive you'd think he'd been pumped full of growth hormones. On Wednesdays, the mascot wears a sandwich board proclaiming a $5 hamburger/fries/drink meal deal that spites his fellow livestock. (We suspect he's pleased that poultry isn't the special of the day.) The bird does accept tips (but not bribes for identity information), so stop by with a big "Cluck you!"

BEST PLACE TO PRETEND YOU'RE NOT IN THE DESERT

You'll have trouble spotting a single saguaro in Encanto-Palmcroft, a lushly landscaped district of upscale, period revival homes in central Phoenix. The neighborhood was developed between the 1920s and the 1940s, when the desert was a wasteland to be conquered, not an ecosystem to be celebrated. So Encanto-Palmcroft is full of homes mimicking the architecture of Italy, England, Spain and France sitting on lawns so green they could have been airlifted from Ohio. These yards, with their roses and hostas and spongy Bermuda grass, scream "$300-a-month water bills." Throw in the attractive middle-aged women walking tiny, yappy dogs on the sidewalks, and you would never know you were in the middle of the Sonoran Desert. Which is precisely the point.

BEST WAY TO HIGHTAIL IT TO VEGAS

Reservation casinos and poker nights at the pub are all well and good, but we need a taste of the real action that only Sin City can supply. We wanna Viva Las Vegas double quick, so we're looking for a sure-fire escape route that'll allow us to blow town and speed toward America's playgound like yesterday. Sure, you could take so-called scenic routes by way of Flagstaff or Lake Havasu, but we've rented a pimped-out 'Stang for the road trip. The way this baby's purring, odds are we're gonna get there in six hours or less, especially since we'll be driving Highway 60. With four lanes of freedom ahead of us, and a 75 mph speed limit, it's nothing but sweet sailing ahead, at least until we get to Wickenburg and connect with Highway 93. Things are a smidge slower the rest of the way into Nevada, as we drop to two lanes and 65 mph. Hey, if we get bored, we'll just take a gander at the roadside crosses along the way, ace, doing our damnedest to keep from becoming one.