In 1938, Reverend Louis Overstreet heard the voice of God, and it told him to buy a guitar. From that moment on, Overstreet made his way as a gospel singer, belting out heavy, blues-inspired music while preaching on street corners. In July 1961, Overstreet and family found themselves in Phoenix, playing outside a nightclub called Trotter's Inn, on Broadway Road. Overstreet decided to start a church in Phoenix, founding St. Luke's Powerhouse Church of God in Christ in South Phoenix. He recorded an album there, featuring his four sons and his nearly psychedelic approach to gospel music. Ahoolie Records eventually issued the records on CD, and, last year, Portland-based roots music label Mississippi Records re-issued the album on vinyl to thunderous acclaim from critics who actually heard it. Overstreet's church still stands in Phoenix, enduring like the album he recorded there.

Considering the lack of a serious military presence here, it's sometimes surprising just how enthusiastic Phoenix gets about the good ol' U.S. of A. For a clear example, just tune into KOOL 94.5 FM at noon. For some reason, the station, which plays a classic hits format with a strong '70s bent (think: Phil Collins' "Sussudio") plays "The Star-Spangled Banner" every day at high noon. It's not, like, some special version, either. Nope, it's the standard sort you'd expect to hear played on an old cassette tape at a middle school basketball game. It's a pretty good gimmick, though. While our national anthem is not the sort of thing most people would seek out for their listening pleasure, wouldn't you feel a little guilty flipping the channel? How could you, what with our brave boys over there in Eye-Rack fighting to keep us free from Saddam Hussein (deceased) and Osama bin Laden (deceased). Freedom ain't free, you know, so keep it locked on KOOL-FM for this obnoxious display of patriotism — followed immediately by some useful information pertaining to the sale of high-quality, modestly priced used automobiles.

Phoenix is usually proud of its winter weather, especially on those pleasantly balmy days when the rest of the country is snowshoeing to work. Well, except for a few weeks in December, around the time that elves, failed real estate developers, and their respective guardian angels take over our televisions. That's when you can sense that the city gets a little self-conscious about our snowlessness. Phoenix actually has a climate not unlike Bethlehem, where the first Christmas was celebrated by dark-skinned Semitic people, but that's of little comfort when we're inundated with the Yuletide rituals that blond-haired, blue-eyed Germanic heathens grafted onto the saintly celebration. So, yes, Phoenix has to work extra hard to get into the Christmas spirit. Which is probably why so many houses are lit up like Sky Harbor around the holidays. No one does it up better than Lee and Patricia Sepanek. The Sepanek display uses 250,000 blinking lights, many hung impossibly high on the palm trees towering over their home in a middle-class neighborhood south of Camelback and 44th Streets. The real show requires more than a drive-by. Toy trains, real snowfall, a hot cocoa stand, and enough animatronics to shame Walt Disney himself make this a must-see attraction. Yes, there are computer-controlled music systems at many other tacky and totally overdone holiday home displays, but detail on every inch of the Sepanek property really makes this house stand above the others. Keep an eye out for Santa and/or a dog dressed as Santa. 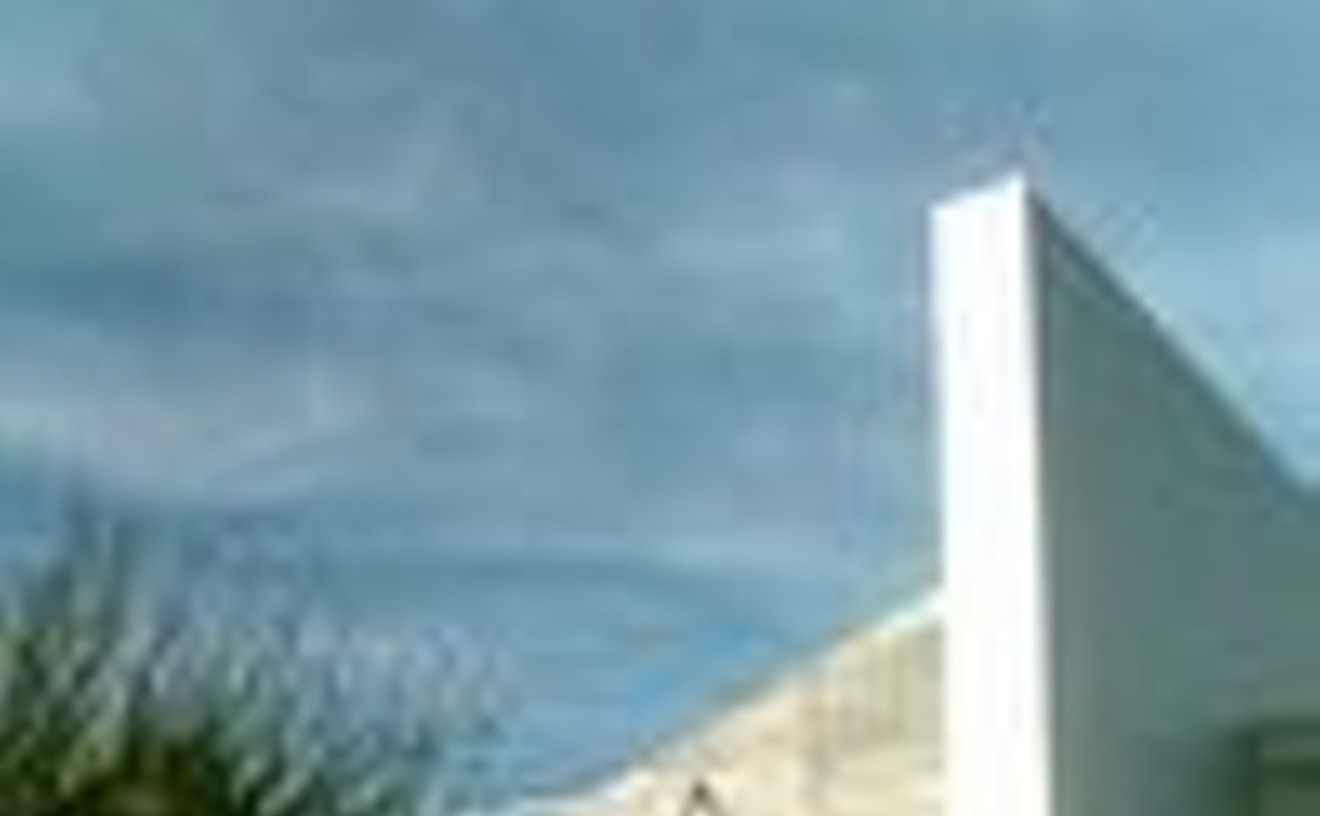 No need to be wary of the large eye watching you walk through the lobby of the Arizona Science Center; the huge lens is the latest collaborative and interactive piece by local artists Mary Lucking and David Tinapple. "Curiouser and Curiouser" borrows its name from Alice in Wonderland. It invites visitors to peer at each other through a giant telescope/microscope that juts out of the center's ceiling, and at the current exhibition through a smaller telescope on the lobby floor. The artwork was commissioned by the Phoenix Office of Arts and Culture and fabricated by Magnum Architectural Inc. Thanks to Lucking and Tinapple, we can all feel very huge, and then very tiny — a very wonderland feeling, indeed. 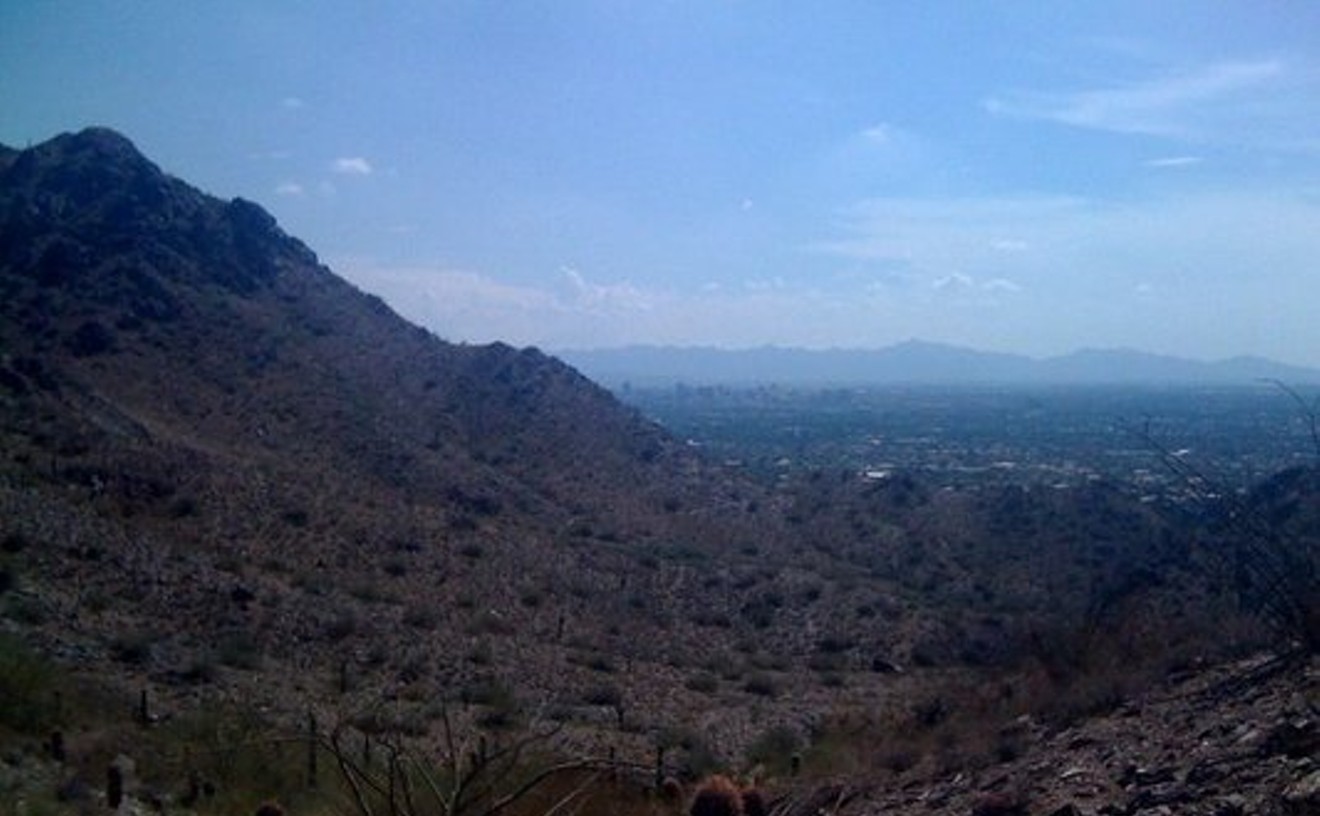 When it comes to Phoenix's best urban legend, folks tend to forget the facts and just love the lore. The lore: In October 1947, there was a UFO crash in what is now the Dreamy Draw Recreation Area. Two men named Silas Newton and "Dr. Gee" claimed to have pulled alien bodies from the wreckage and stored them in a freezer until the U.S. Army picked them up. The Dreamy Draw Dam was then built over the crash site, to cover it up. The facts: Aside from a couple of niche books on UFOs, there's no documentation of an alien crash at Dreamy Draw, and no wreckage from the crash has ever surfaced. Newton and "Gee" were exposed as con men (the former was even investigated by the FBI for his business dealings), and the dam was not built to cover anything up, but for the same reason any dam is built: to prevent flooding to the surrounding neighborhoods. Also, the dam wasn't constructed until 1973, which would make it the worst (and most tardy) structural cover-up ever. Still, it's kind of fun to hike Dreamy Draw and imagine there are little green men buried beneath the dam.

Are you a jewel thief or a gold smuggler looking for a hush-hush place to stash your purloined goods? Then steer your getaway car to the Mountain Vault, a high-tech (and super-secretive) storage facility that's drilled directly into the side of a mountain in north central Phoenix. How do we know it's so secretive? Because not only did they refuse to let us take pictures of the site, they wouldn't even answer the most basic questions about the facility. So, instead, we'll tell you what is known about this exotic private strong room. Naturally climate-controlled, thanks to the thick rock walls, the vault itself is tucked behind a 6,000-pound steel door and protected 24-7 by an armed guard housed inside a bulletproof station. More important, unlike a traditional bank safety deposit box, which can be seized by law enforcement or even "frozen" during a legal dispute, what happens inside the Mountain Vault stays in the Mountain Vault. Nice.

And you thought the East Valley was so staid. Think again. Business owners along Mesa's Main Street have reported knickknacks falling off shelves and mysterious items being found in basement storage areas. The row of vintage brick buildings sits atop a series of tunnels rumored to have been used for bootlegging alcohol during Prohibition. Most of the connecting tunnels have long since crumbled or been walled off, but visiting paranormal investigators such as Tucson's Wailing Bainsidhe group have detected unusual heat readings and ghostly orbs in the basement areas that remain.

It's probably no huge surprise that Ladmo, the iconic host of Phoenix's historic kiddy TV program The Wallace and Ladmo Show, is buried here (at St. Francis Cemetery, 2033 N. 48th St.). Or that country music legend and former Phoenician Waylon Jennings' final resting place is right here in the East Valley (at Mesa Cemetery, 1212 N. Center St. in Mesa). But why in the world is Walter Winchell buried here?

Winchell, the famous American newspaper and radio commentator who died in 1972, is taking a dirt nap at Greenwood Memory Lawn Cemetery (719 N. 27th Ave.), right here in Phoenix. Winchell is credited with inventing the modern-day gossip column, co-founded the Cancer Research Fund, and retired here after his syndicated column was canceled in the 1960s. Although Winchell moved away from Phoenix to Los Angeles in the 1970s, in an attempt to revive his column and his career, his remains were shipped back to Phoenix after his death in 1974, and he was buried in the family plot.

Other celebs both notorious and noteworthy who have met their final rest here include former film star and Jack Ross Lincoln Mercury spokeswoman Acquanetta, who played exotics (and, in one memorable movie, Tarzan's girlfriend) in a string of 1930s Hollywood potboilers. She's resting forever somewhere in Ahwatukee, although almost certainly not on the sacred Indian burial ground she sold back to Maricopa County a number of years ago. Local hero Barry Goldwater, a five-term U.S. senator and Republican presidential nominee, is six feet under at Episcopal Christ Church of the Ascension in Paradise Valley (4015 E. Lincoln Dr.) — no surprise there. But who knew that Hadji Ali (known to friends and fans alike as Hi Jolly) is also buried here? Ali became a living legend when, in 1856, he led the camel driver experiment here, one of several men brought over by the government to transport cargo on the backs of camels across the arid Southwestern desert. In 1935, a monument to Hadji Ali and the Camel Corps was erected in the Quartzsite Cemetery in La Paz County (465 N. Plymouth Ave.). The monument is in the shape of a pyramid topped with a copper camel and is built from local stones. Top that, Ladmo.

To see an illustrated guide to where the bodies are buried, visit www.phoenixnewtimes.com/bestof2011.

Best Place to Urinate in Public 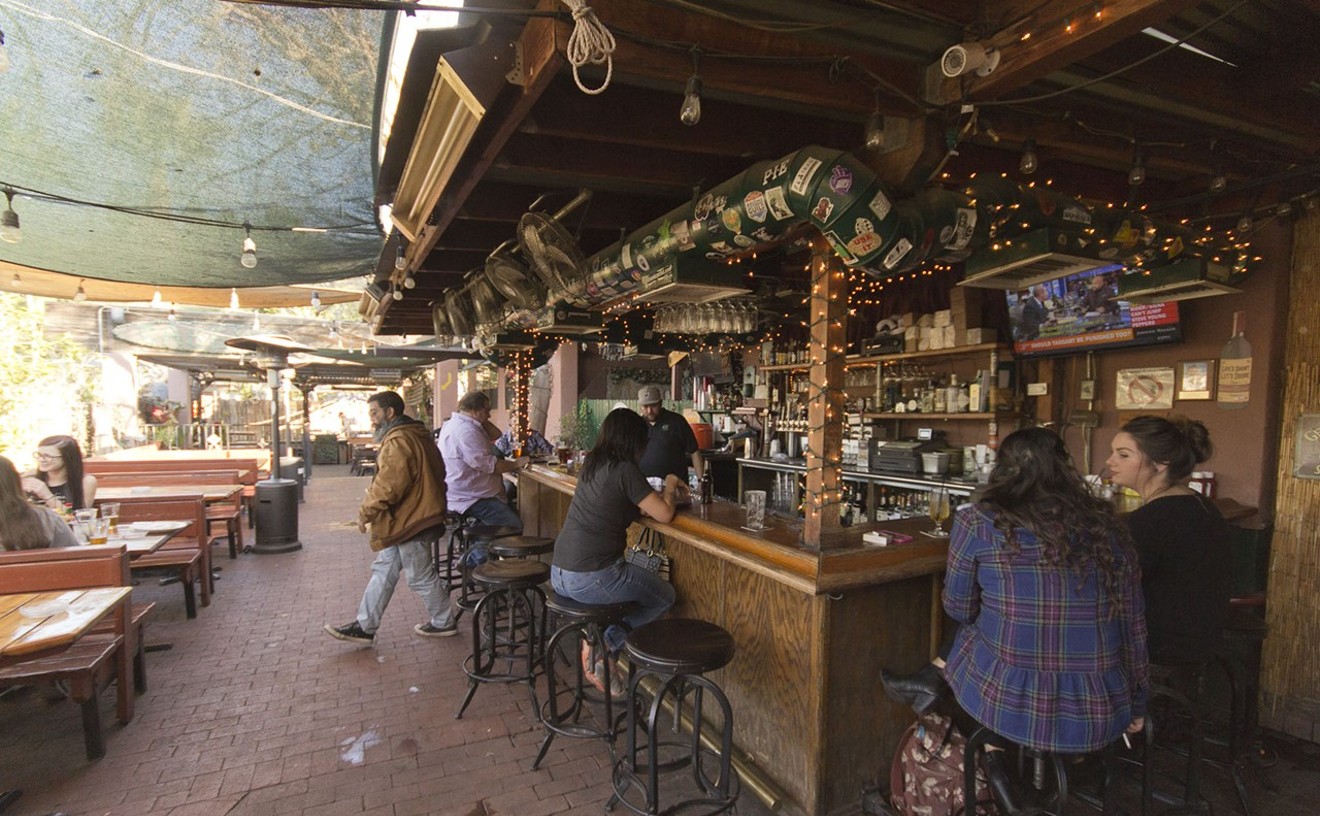 Tom Carlson
We've all been there. You're at Casey's, drinking what started out as one pint of IPA. It quickly turns to two and, then, God knows how many. What is certain is the raging flood of urine currently threatening to saturate your pants if you don't get up and do something about it. Pushing your way through the throng of bar-goers to make it inside seems impossible. Your only option? The blarney stone. This outdoor wall stained by the liquid leavings of countless drunks before you and shielded slap-dash by a piece of fence is your ticket to relief. Pee on the Blarney Stone knowing full well that the tremendous sense of happiness you experience will feel just as sweet the next time you have to take a leak.

Best Way to See the Art You Missed on First Friday

Downtown Phoenix's First Friday is the largest self-guided art walk in the country. For some, that is reason enough to steer clear. So, if you are more into the art than the scene, go when the crowds are thinner and the experience is about looking instead of being seen. Visit downtown Phoenix galleries on the third Friday of the month. You will still bump into friends, but you'll bypass the fire-breathing 20-somethings who crowd the streets on First Fridays.