For many suburbanites, they're as close as the Valley gets to a natural water feature. But Salt River Project's canal system isn't a series of lushly planted swimming holes; it's a man-made network of several connected bodies of water that run in an underground network through much of the southern half of the Phoenix metropolitan area, helping to distribute water from the Salt River system.

The system of canals SRP operates today was developed by the Hohokam Indians, American pioneers, and the federal government. The precise locations of the original Hohokam canals remain a mystery, in part because most of them have been destroyed by land development. Redeveloped over the past 100 years, each canal — with unglamorous names like Arizona, Crosscut, and Consolidated — has a unique history. The Grand Canal, constructed in 1878, is the oldest remaining pioneer canal on the north side of the Salt River, and the site of at least one annual (and quite secret) pioneer re-enactment game, complete with covered wagon. (Shhh!) And while portions of the old crosscut canal have been turned over to the city of Phoenix to carry away messy storm drainage from the northeast side of town, it hasn't discouraged neighborhood teens from making this canal their after-school hangout.

For some desert dwellers, though, the canal system is an open invitation to play. An unofficial society of canal dwellers can be found most weekend mornings, hunkering around the Tempe Canal or the South Canal over by the old Val Vista Water Treatment Plant. Summertime swimmers are forever being fished out of the canals and sent home with citations, since the canals aren't a resort feature, but a functional means of moving agua from here to there — with sometimes dangerously fast currents. And speaking of fish, trolling for trout is a pastime among many canal fans. While the thought of eating anything caught in a canal makes us go "Ack!," we can't really blame people for wanting to throw out a line or jump in and splash around a little — some of the canals are beautifully seated in lovely areas.

The New Crosscut Canal in Papago Park is surrounded by lush plant life and offers a stunning view of the Papago Buttes. And the Arizona Canal, located about a half-mile below Granite Reef Dam, affords visitors a perfect view of the Four Peaks mountain formation and a man-made mini waterfall that's nice to look at.

Best Place to be at Sunset 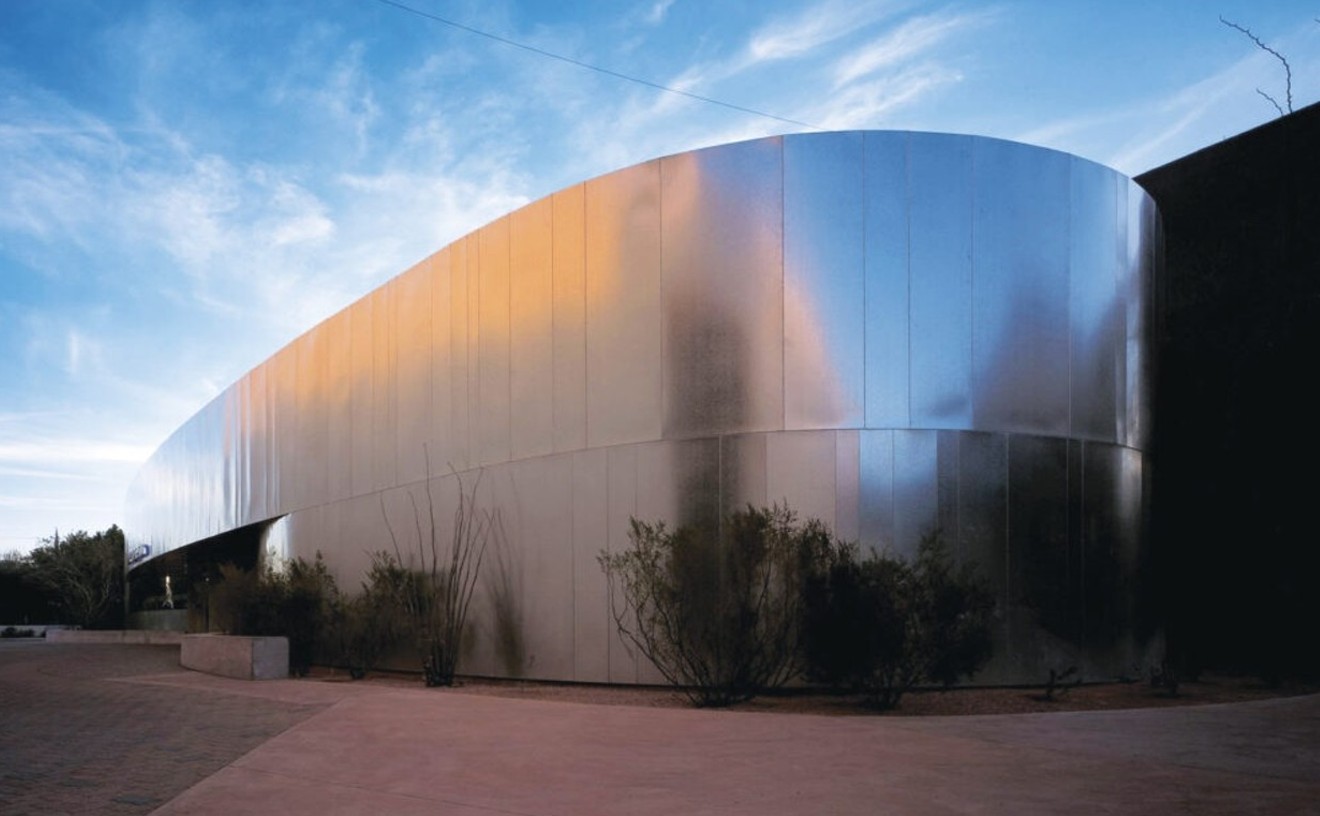 You have to know to look for it. Enter the Scottsdale Museum of Contemporary Art — and you can walk straight ahead to the current exhibits, or turn right into the gift shop. Both wise options. Or, if it's close to sunset (hint: the museum is open late on Thursdays — and admission is free), take an immediate sharp left. Down a hallway you'll find a small, oval-shaped room, all concrete. It feels monastic, but settle yourself onto the hard gray bench and look up. From dusk to dark, the change through that ivory-framed hole is remarkable, as the pale sky takes a tour through the blue-hued section of your 64-pack of Crayolas. End your time in the small space with a dark velvet blue sky and a feeling that this is a day — and night — to remember. 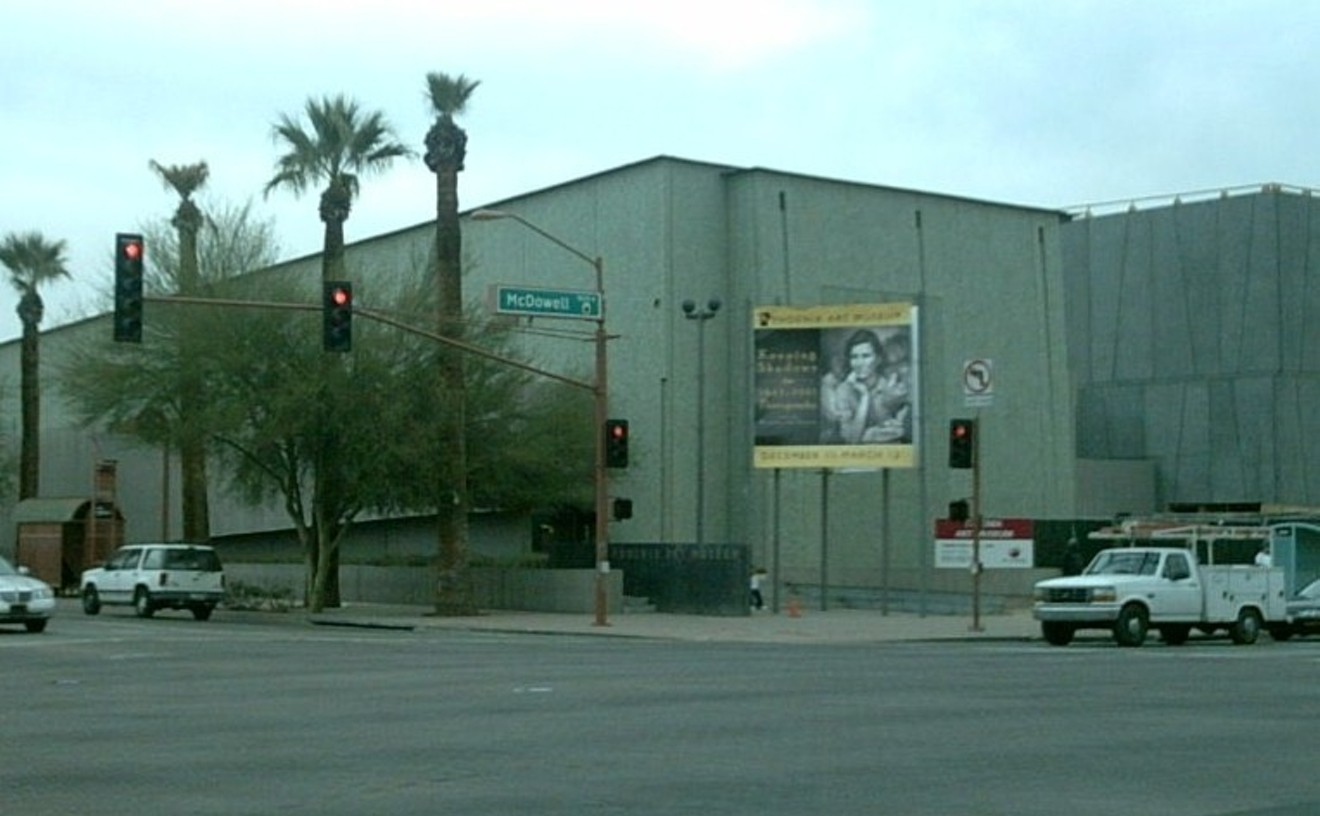 In this year's Best of Phoenix we are taking you underground, but here's a hidden treasure you'll find on the top floor of the Phoenix Art Museum. We admit we're guilty of neglecting our city museum's permanent collections — we're more likely to hit PAM or the Heard Museum to see a blockbuster show. But this year we had occasion to take a stroll through the contemporary collection upstairs at the Phoenix Art Museum, and we were so glad we did. A friendly museum guard told us to be sure and check out the fireflies — and after some hunting we came upon a funny-looking closet-like exhibit lit with hundreds of teeny colored lights, with mirrored ceiling, floor and walls. The effect (once you get over a bit of claustrophobia) is, true to the exhibit's name, like finding yourself in a swarm of fireflies. Best of all, the fireflies are part of the museum's permanent collection, so you can take your time getting over to see them. 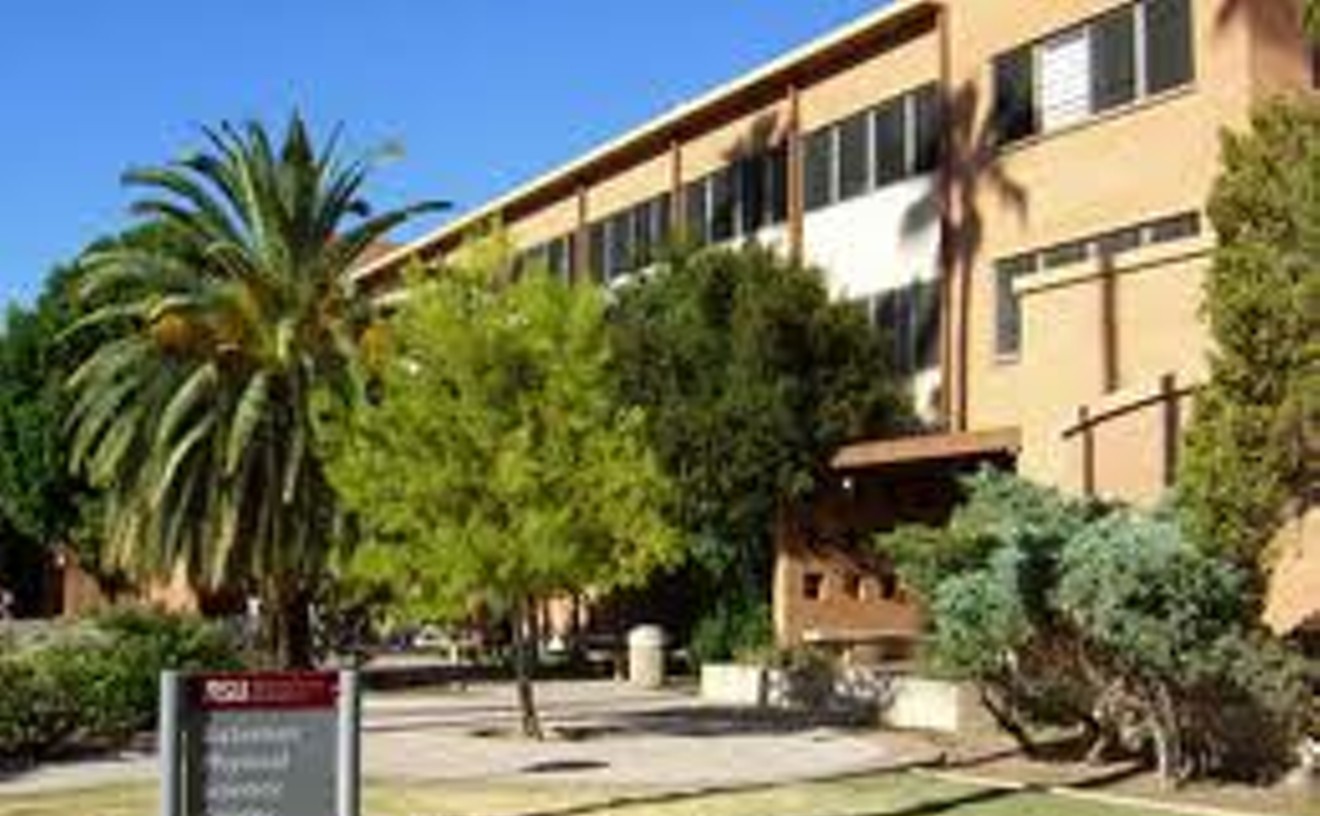 You don't have to know the difference between a comet and a meteor to climb up to the rooftop of the Bateman Physical Sciences wing for a killer show. Each month (during the school year), graduate students at ASU's School of Earth and Space Exploration open their laboratory doors to the public for planetarium shows, informational sessions, and, our favorite, a view of the stars through their telescopes. The open house runs from 8 to 10 p.m. and is free to the public. No reservations are required.

On March 18, 1961, the Roosevelt Dam (on the Salt River northeast of Phoenix) had its Golden Jubilee (50th anniversary). As part of the celebrations, a copper time capsule was placed in the dam. The capsule was removed — but not opened — in 1984 (when Roosevelt Dam was modified) and placed in the Roosevelt Lake Visitor Center. On March 18, 2001, Arizona Bureau of Reclamation deputy commissioner Kira Finkler opened the capsule in front of about 200 guests, revealing voting ballots from 1960s elections, a list of Roosevelt Dam employees at the time, photos, and a letter from then-president John F. Kennedy about the importance of the dam. It was exciting to see some Arizona history unearthed, and more will be buried. The Salt River Project is now designing and filling a new capsule, to be buried this year and unearthed in 2061. 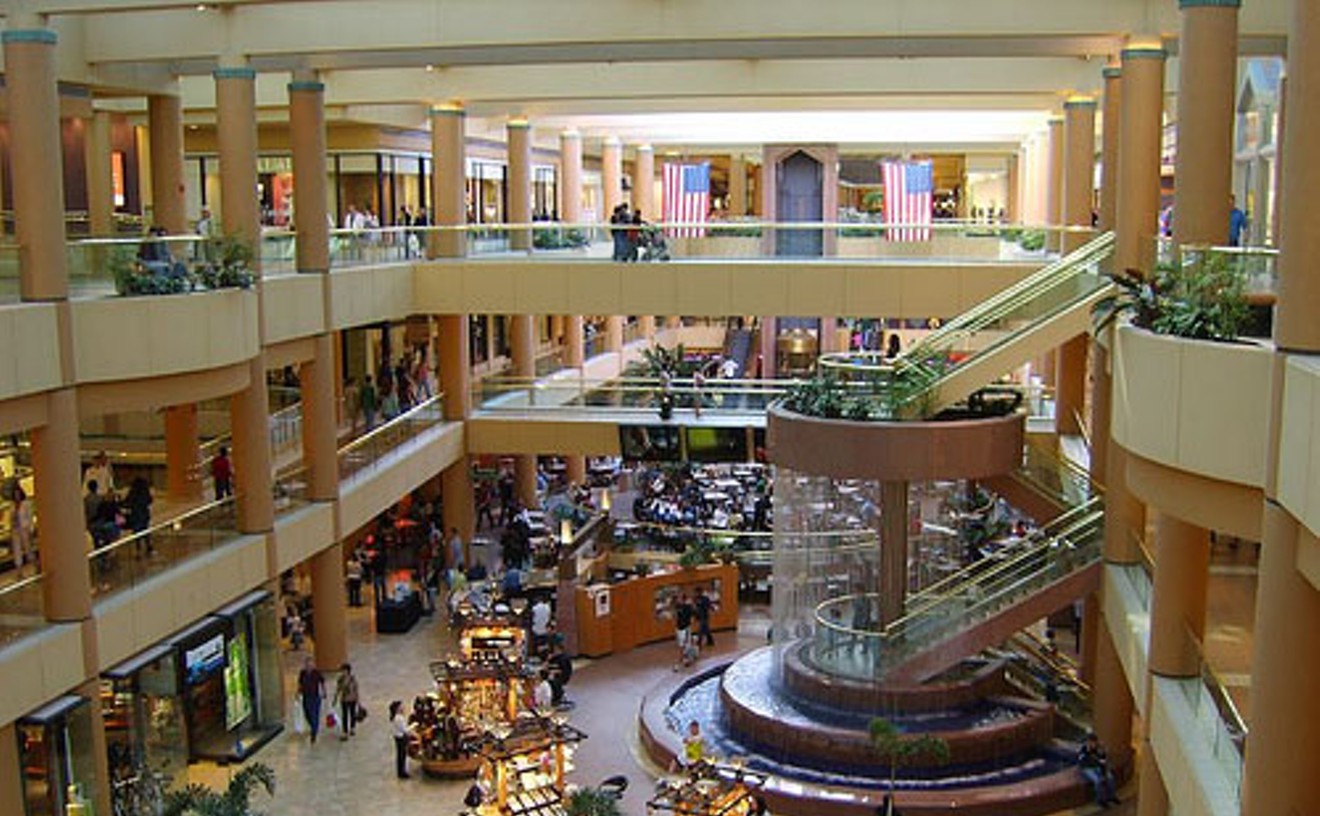 One of the things we like about Scottsdale Fashion Square is that so many of its parking garages open right onto high-end department stores: Like Dillard's men's store, which has an entrance in one of Fashion Square's big, shaded parking garages, just like Nordstrom's does, up the street. We think it's awfully civilized. But not as cool as one particular section of Fashion Square's parking, where we always stash our wheels, especially in the hot, hot summertime. This entrance is on the south side of the mall, in front of Modern Steak, where there's always a traffic jam of cars wanting parking spaces. Beneath this, there somehow are loads of places to park, which means not only coming back to a cool car after shopping or dining (without paying to valet park!), but also getting to go down that fun ramp into the garage itself. Whee!

Next time you're driving down Interstate 10 in Phoenix — approaching the Deck Park Tunnel — take a quick look at the center median. Did you notice anything odd, like a fenced-off passageway slicing right through the middle of the larger tunnel? That, friends, is Phoenix's infamous Papago Intermodal Transfer Station — a.k.a. an underground bus station that was started in 1990 but never actually completed.

According to Valley Metro light-rail director Wolfe Grote, who was involved with the planning of the I-10 tunnel back when he worked for the City of Phoenix's public transportation department, the bus station was designed to serve the needs of the then-red-hot midtown Phoenix area. (One developer was even proposing building a 114-story skyscraper in the area, which would have been the tallest in the world at the time.)

"The thought was to include an express bus station into the plans for the new tunnel that would allow passengers to exit underground and then ride a combination of elevators and escalators up to the park level," Grote says.

Unfortunately, despite spending more than $9 million to build the bones of the structure, the city was never able to secure the $20 million-plus in federal funds it would have taken to complete the project.

Meanwhile, the flood of new developments in midtown failed to materialize, and Valley Metro started delivering workers directly into downtown Phoenix via a new system of express buses. And maybe the last best chance to build out the station fizzled in 2008, when the planned light-rail extension to the west was routed through the Arizona State Capitol area a few miles south, rather than running through the I-10 tunnel.

So for now, this monumental concrete cavern remains a road to nowhere.To see a slideshow of the abandoned bus station, visit www.phoenixnewtimes.com/best of2011.

Stepping inside NRG Energy's underground cooling plant in the heart of downtown Phoenix, you feel a little like Alice falling down the rabbit hole. One minute you're standing outside an anonymous metal door next to the Phoenix Convention Center, and the next you're three stories underground, walking across a metal bridge suspended over a massive holding tank filled with bubbling, neon-green ice water. Named the Downtown Cooling System, this plant, along with two others sprinkled throughout the city core, chills and then pumps near-freezing water to more than 35 buildings across downtown via an underground system of pipes.

The water, which is dyed green in case of a leak, is then used to air-condition everything from Chase Field and US Airways Center to Symphony Hall and the Fourth Avenue County Jail.

Even cooler: The system chills CityScape's outdoor ice rink every December, and also powers the Valley's only air-conditioned Valley Metro light-rail station, at the corner of Second Street and Jefferson.