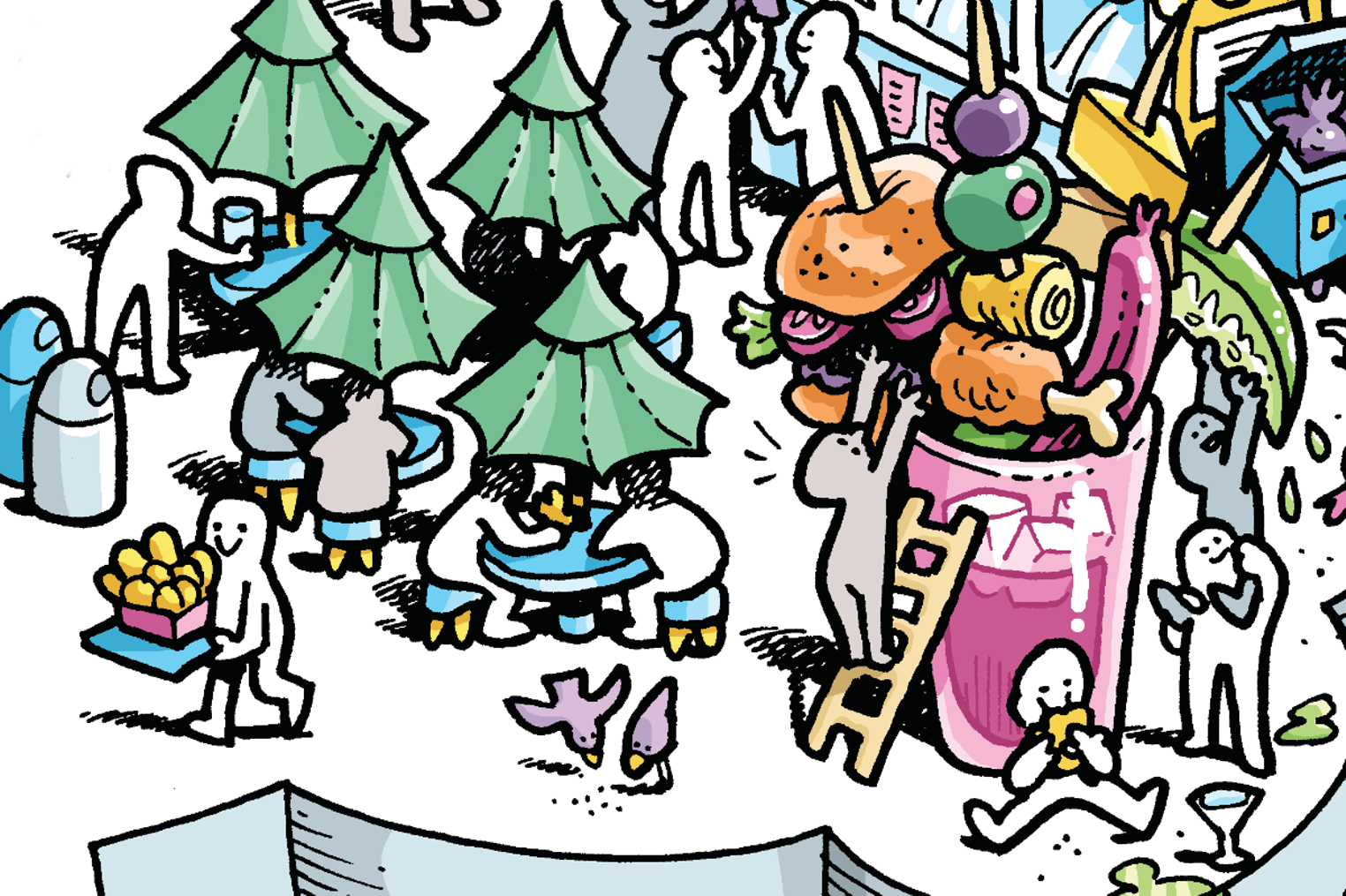 Looking for Food on Seventh Street

It’s Wednesday, and you don’t feel like cooking; you’re hungry, but don’t know what you want to eat. It’s too bad you don’t live in a city where you can drive up and down a single street that’s chockablock with dining choices, considering your options before tucking in for a really swell repast.

Oh, wait. You live in Phoenix, home to North Seventh Street, which several savvy developers converted a few years ago from another blah thoroughfare into a culinary stronghold. Now then. Where’d you put your car keys?

You miss the good old days of Tempe. We get it; we miss that golden, grimy era, too. But something had to take over the space once occupied by Sail Inn, the legendary Tempe rock club. We didn't give The Lodge, a Sasquatch-themed sports bar that opened in 2015 in the location, much of a chance at first. But six years later, we must admit: It's a damn solid sports bar. The woodsy theme, sure, whatever, it's fine. The patio's nice and spacious too. But we go for the grub. We practically lived here during the Suns' playoff run, during which time we became big fans of the Nacho Mountain (absolutely huge), the chicken tenders (we are tender aficionados, and these are some of the best in town), and the green chile pork stew (endorsed by no less a personage than Guy Fieri on Diners, Drive-ins, and Dives). The staff's super-attentive, and you don't have to deal with the kind of undergrad nonsense you'll encounter a few blocks away on Mill Avenue. Change can be bittersweet. At The Lodge, at least it's also delicious. 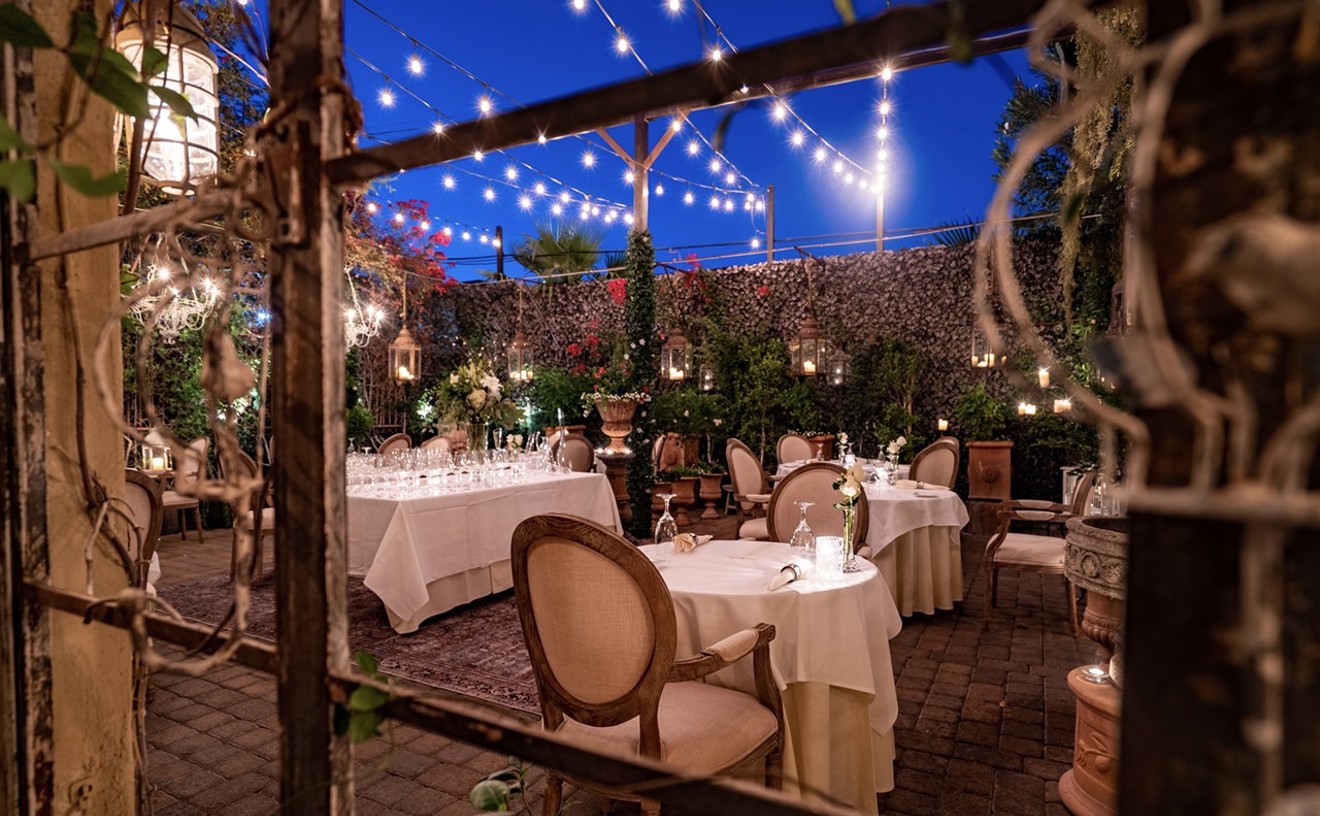 Phillip Lewkowicz, vice president of operations for Monarch Hospitality Group, and his family own the high-end Scottsdale spot Café Monarch — an Old Town joint that has won multiple accolades for being the most romantic restaurant in town. Well, until now. Their spinoff, a venture called Reserve, has usurped its parent eatery. As with many luxury products, scarcity is baked into the concept: Reserve serves only 25 diners per night. Guests first pass through a lush, garden entrance, then an interior welcome area, where a cocktail hour with hors d'oeuvres commences. Then it's on to the courtyard, where dinner is served. A tasting menu of 12 courses is offered, with other bites in between. Three advanced sommeliers help with wine pairings. But the patio, the aforementioned courtyard, is a vision of soft lighting, chattering diners, clinking wine glasses, and romance. It's truly the best new date night spot in town. 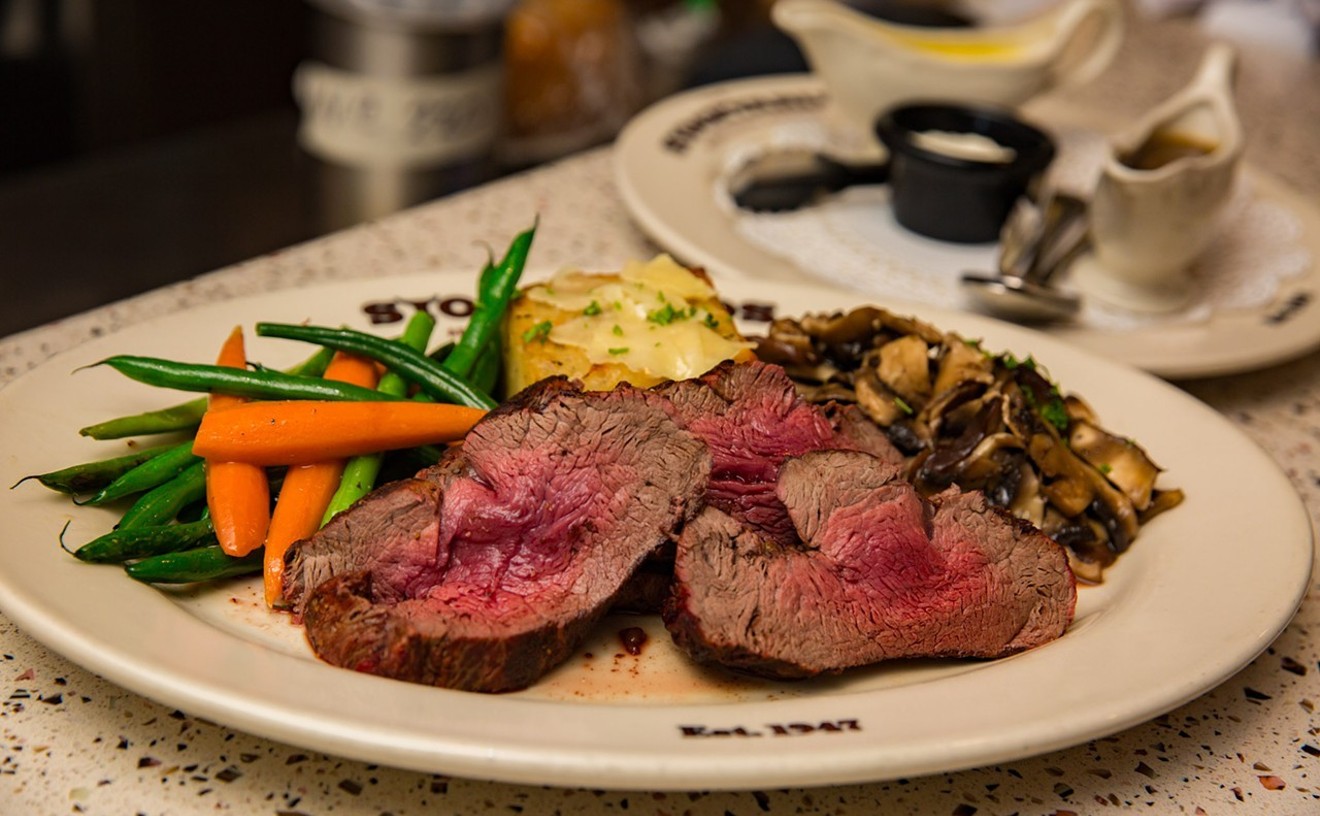 People say you can get a really good porterhouse at any number of places around the Valley. But can you? Not according to us. So we swear by the steaks at this Phoenix perennial, which serves the finest corn-fed slabs of beef in town. The Stockyards' claim that it's "Arizona's Original Steakhouse" isn't hooey — the restaurant has been with us since 1947, offering entrees with an emphasis on hearty flavors and honking portions. There's no gourmet trickery here; no mushroom sauces or demiglace to detract from the filets and sirloins, the giant baked potatoes and fresh-steamed vegetables. And if you find yourself wanting to eat a little less food or spend a little less money, don't sleep on the restaurant's 1889 Saloon, a side room with turn-of-the-century appeal and a lighter menu of sliders, wings, and even calf fries. What we're saying is: Take your meat-and-potatoes ass to the Stockyards. 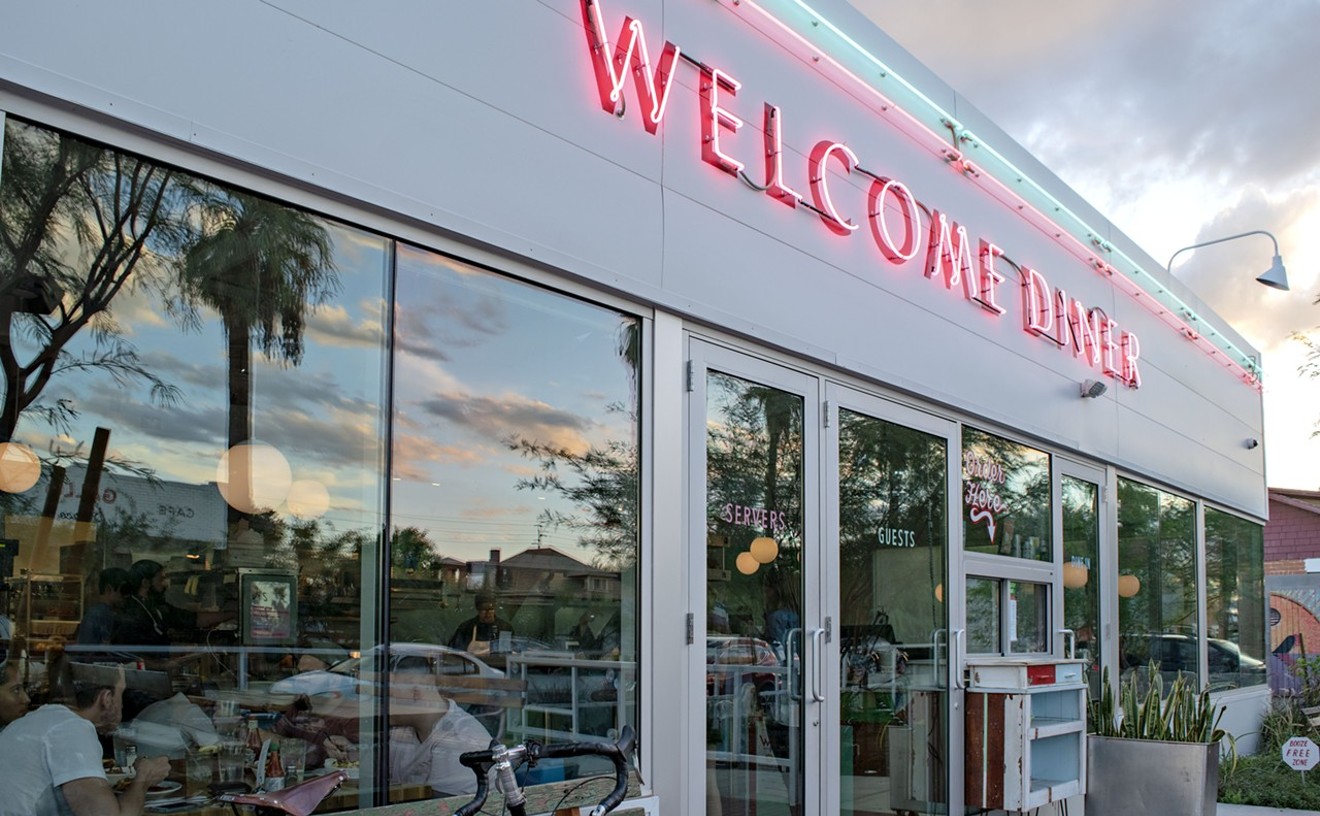 We have one teeny-tiny complaint about Welcome Diner: We don't get to eat there as often as we want. The retro-style diner is only open for breakfast and lunch on the weekends, which means we usually have to wait till dinnertime to belly up to the counter. But it's worth the wait. Fortunately, we can order off Welcome's breakfast menu any time of the day or night. The Whip Toast (French toast with berry compote and whipped cream) is a favorite. But there are no bad choices on Welcome's tight menu of burgers, sandwiches, hot dogs, and chicken and biscuits. If it's hot or rainy, we try to squeeze into Welcome's retro-chic interior, but on crisp fall nights, we love to eat and drink on the patio, where denizens of the Garfield neighborhood gather to enjoy this local treasure.

Since 1964, Elizabeth White's hallowed soul food joint has catered to the downtown masses. Stepping in for a lunch of classic soul food plates like juicy, shattering fried chicken or stewed oxtails melting off the bone feels like existing inside of a textbook photograph, or stumbling onto a movie set. The Sharpied walls, half-open kitchen, and quick, friendly service feel teleported out of an older age of hospitality. You can't miss with the food here. Even the stewed collard greens and unadorned black-eyed peas are completely on point. If you want to end a pilgrimage to Mrs. White's with a bang, finish with the sweet potato pie. 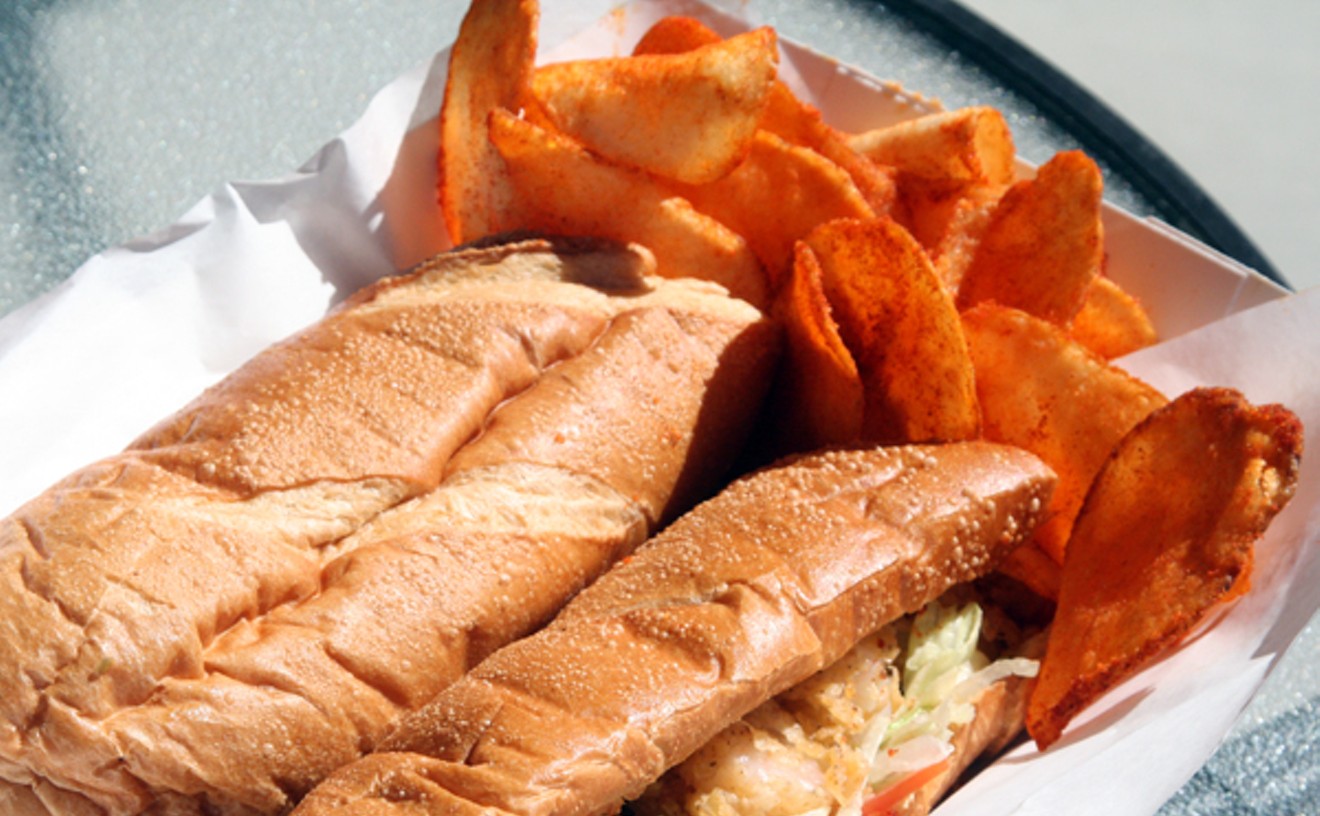 As born-and-raised Southwesterners, we're deeply envious of anyone who got to grow up eating the kind of food they serve at Flavors of Louisiana. Now that we've been initiated in the ways of Cajun and Creole cuisine, we're hooked. What should we talk about first? Maybe the Dunkin Catfish, two perfectly done strips of fried fish on top of crawfish etouffee-covered rice. Or the Cajun Trio of jambalaya, crawfish pie, and gumbo, which delights the senses and stuffs you to the gills. It's all excellent, and all served with a smile by Flavors of Louisiana's charming staff (that Southern hospitality thing is no joke). Resist the temptation to finish your entree; take it home. That way, you can end your feast with peach cobbler or beignets. Or both.

Ever since the pandemic made it much more of an ordeal to travel, we've found ourselves frequently thinking about journeys past. When we crave the cheerful din of an English tavern, we head to George & Dragon in central Phoenix. You don't need to eat anything here to have a satisfying time; a pint of Smithwick's, some football (meaning soccer) on the TV, and a friendly chat with the chap on the next barstool is a fine way to while away an afternoon or evening. But we recommend sampling the menu: The chicken and vegetable curries are celebrated for a reason, and traditional British fare like shepherd's pie and bangers and mash pair well with the ciders and beers on tap. Until we can hop the pond again, George & Dragon gives us that British pub experience, right in the heart of Phoenix. 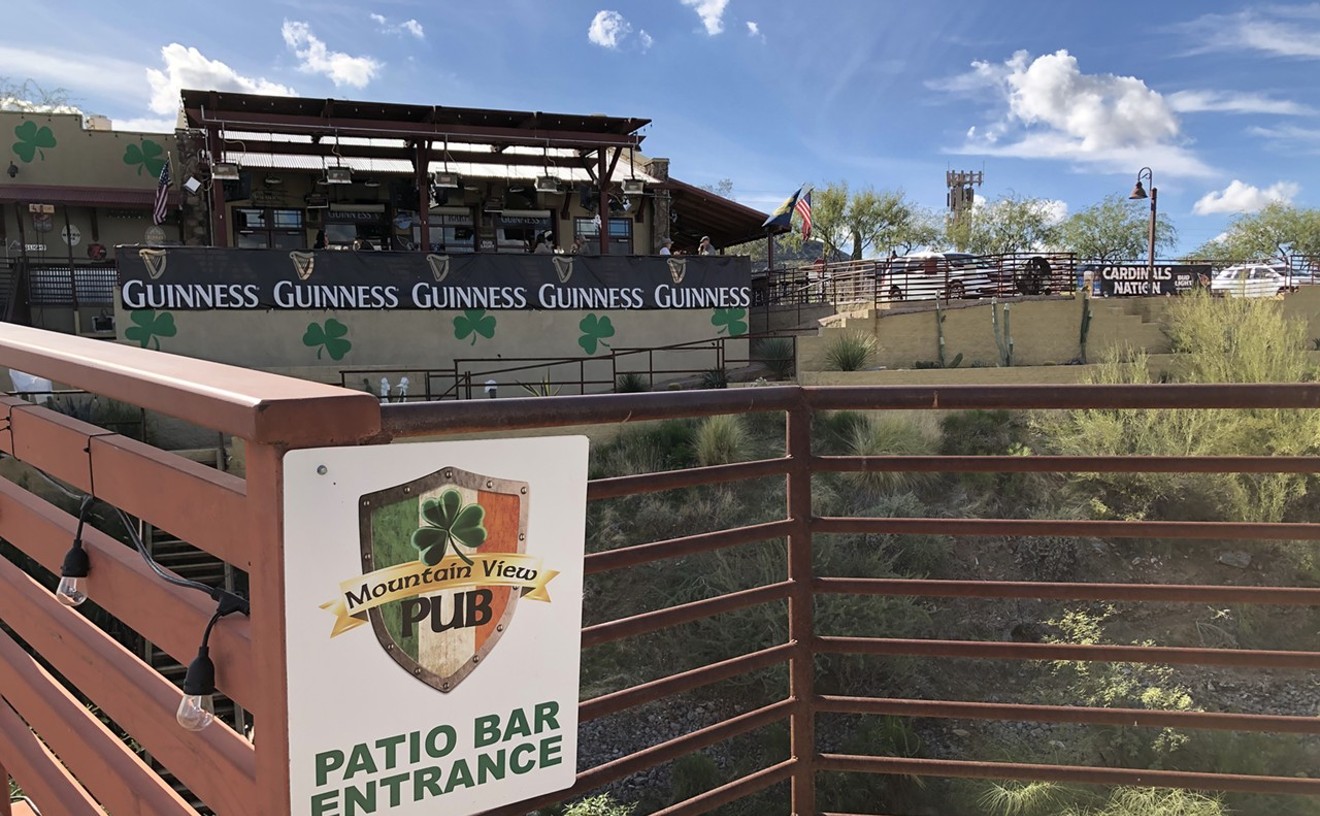 Sure, you got your McCaffrey's, your Dubliners, your suburban corner pubs. But in downtown Cave Creek's crowded food-and-drink scene, look for the giant Guinness banner and head toward Mountain View Pub. It has the usual Irish bar traits: imported beers, appetizers, an assortment of antique furniture, an internet jukebox. But there's also a stage framed by exposed cobblestone, some natural sunlight, and a massive back patio with absolutely breathtaking views of a river valley and the north Valley mountains. To drink, order a margarita, a house favorite that's served in a Guinness pint glass. To eat? Stay on the ol' Emerald Isle; we like the Irish breakfast platter, Irish pub nachos, and the Reuben, which is made with corned beef cooked daily in Guinness.

Okay, maybe German isn't the trendiest cuisine at the moment, but there's no denying its effectiveness as comfort food. The menu at Haus Murphy's in Historic Downtown Glendale is stocked with hearty, stick-to-your-ribs fare. We like to start with the giant Bavarian soft pretzel, which comes with butter, mustard, and (for an extra fee) cheese sauce. The schnitzels are the best in town; if you order the sampler plate, you'll get to try the chicken, paprika, and steak schnitzels, all of which are perfectly fried without being too heavy. Our final bit of advice? Come to Haus Murphy's on a mostly empty stomach — not just to enjoy the large portions, but also so you can sample the restaurant's impressive beer selection (and maybe a Black Forest torte). 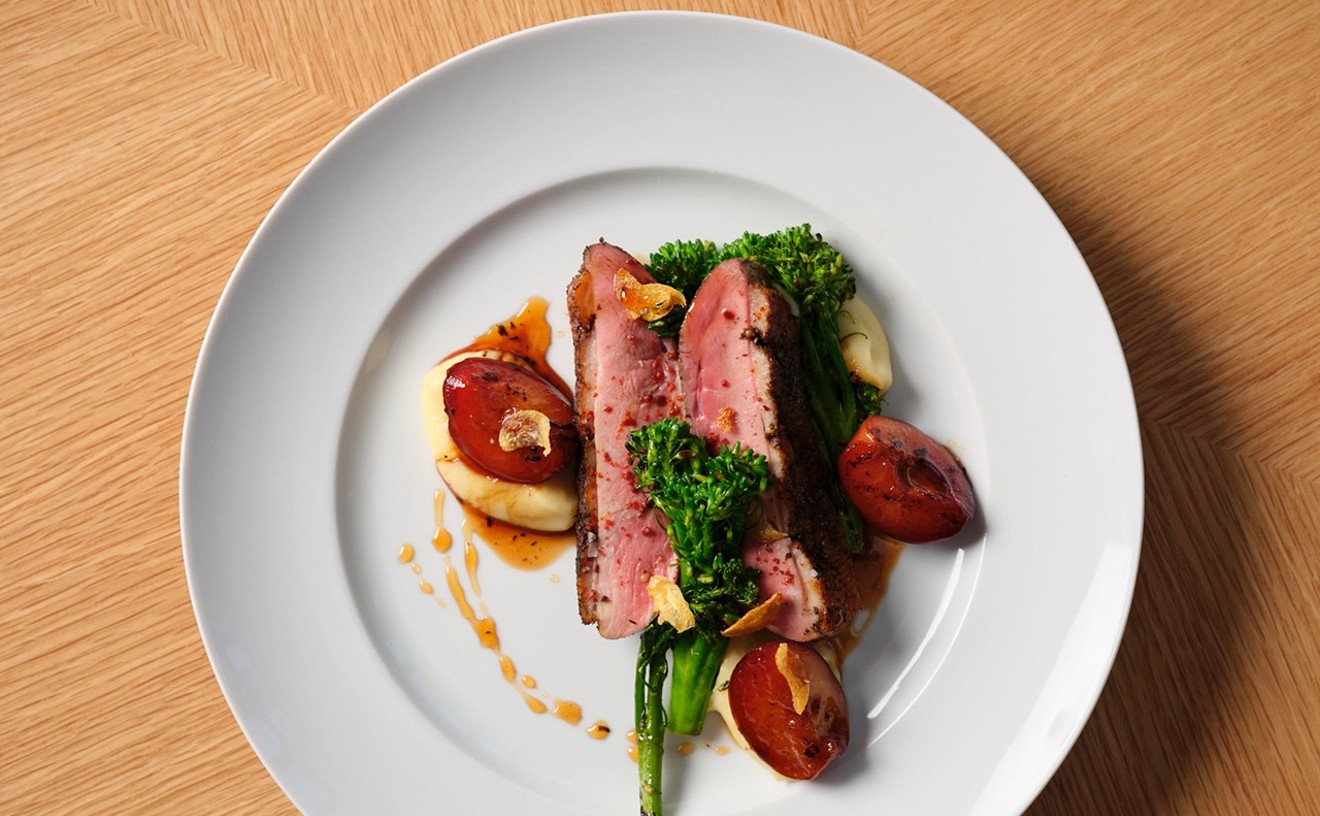 Inside this lofty temple of breezy, white-painted woods, exposed rafters, and brassy accents, an elegant modern French restaurant hums. It's not elegant just because of the postcard bar with its smooth hewn-rock top and plant leaves jutting from atop the brass back bar. Francine unites coastal French cooking with strong influences from Spain and southern Italy, the dishes ranging from old to new. Brian Archibald cooks them with a true hand. Some of his highlights are a citrus-touched crab ravioli and a whole branzino baked in a salt crust. Archibald prepares textbook panisse, the classic French chickpea cake, but also mixes it up with dishes such as wood-roasted octopus with chorizo. In 2021, lots of French dining can feel sleepy, but Francine delivers a pleasant, galvanizing shock.