Cannabis Consumers Soak Up the Artistry at This ‘Heady’ Glass Showcase 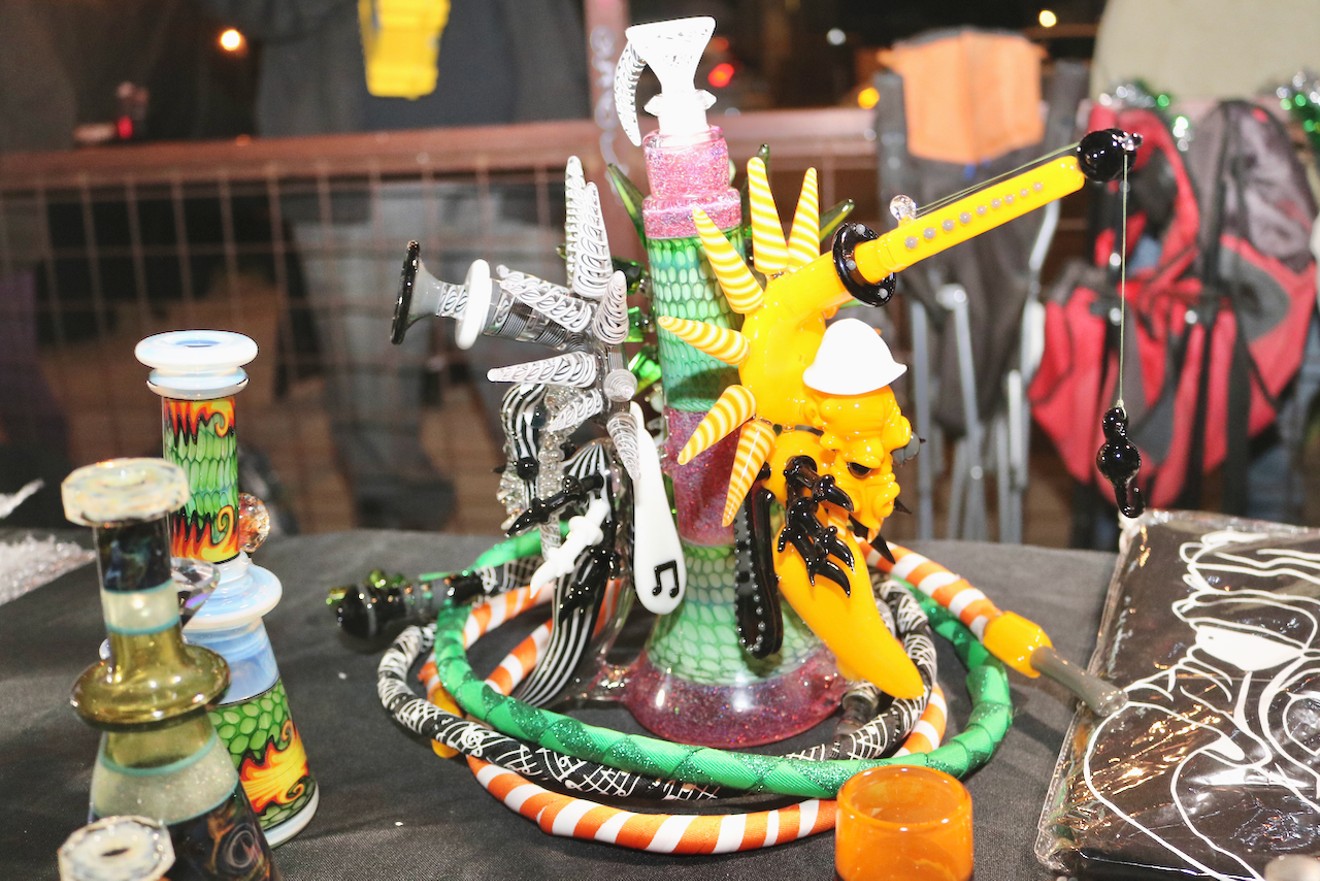 This monster hookah from artist Chris Drury sells for $15,000. The glassblower had it on display at Hendy's Heady Holiday. Mike Madriaga
Artisans in the Valley who craft bongs, rigs, pipes, and hookahs turned up the heat for a glassmaking showcase in the Roosevelt Row Arts District.

About 20 glassmakers, a dispensary and cultivator, a food vendor, artists, and small business owners set up shop in front of Bud's Glass Joint on North Fifth Street for Hendy's Heady Holiday in December. Cannabis consumers enjoyed perusing hundreds of handmade and blown glass pieces that ranged in price from $10 to $15,000.

The free event had a chill vibe for the 200 to 300 attendees. Ambient, electronic, and jazz music played on loudspeakers, but the volume was subtle enough to enable folks to converse comfortably. People smoked at nearby picnic tables. In addition to glassware, vendors were also slinging hemp soap and candles, t-shirts and gear, artwork on canvas, and non-infused pastries.

"All these guys are talented, and most of their stuff is on the higher end, and you get to meet with the artists and talk with them," said Greg Centrone, a co-owner of Bud's Glass Joint. "They are real persons, and there's a chance for all the glass blowers to come and hang out as they're from all over the state."

Centrone said the state doesn't get enough credit for its talented glass artists. The holiday showcase is a way to change that.

"This is a full showcase of what that is. Some people ask, 'Why are those so much money?' But when you watch six different glass blowers work for six to eight hours straight apiece, and then you see the finished product, you're like, 'Ok, that makes sense.' These guys are pouring their heart and soul into it," Centrone added. 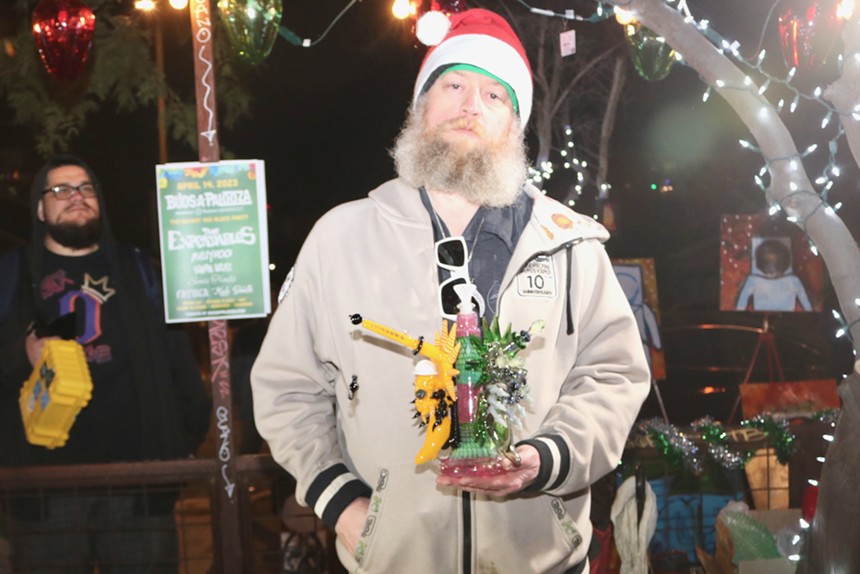 Chris Drury with his hookah that won second place in 2022 at the Champs Trade Shows national glassmaking competition in Las Vegas.
Mike Madriaga

An Event Built for Local Artists

The highest-priced glassware of the event was a $15,000 hookah crafted by local Chris Drury, who goes by @shuhbuh on Instagram. The glass hookah has three outlets for three tokers that could puff on simultaneously after adding weed to the bowl up top rather than flavored tobacco.

The spike-adorned masterpiece, which featured glassy wasps with monster heads, won second place at a glassmaking competition at the Champs Trade Shows in Las Vegas in 2022. Drury, a 10-year glass-blowing veteran, competed in the master class.

"I've got about 80 to 85 hours of prep work into that, but in the competition, we had two seven-hour days to assemble it," he explained. "The contest theme was 'Who you are, where you are, where you wanna be.' So I referenced my background — a construction background. And I think that helps me build a lot of pieces that I make."

A portion of the hookah resembled a tower crane with a protruding jib and a string connected to a glass hook block. Drury also has a musical background, which helps with the composition of his creations, he noted. The musical section of the ensemble has a black-and-white finish that resembles chords with musical note accents. "The pieces are fully faceted — it's where I want to take my career. It's full of working glass; I kind of wanted to make it look like a gym," he added.

"[The event] is geared toward local artists even if they're not glass blowers," Drury said. "We have artists here that do paintings; it's all about the local art gathering of this community. The way Bud supports us and brings us all together with a spot to show all of our art is what it's all about."

Ash Polzer, a Tucson-based artist, was among the artists selling their work at Hendy's Heady Holiday.
Mike Madriaga

‘My Favorite Is This Sherlock’

Inside Bud's Glass Joint — which has a spot along Grand Avenue in addition to the Fifth Street location that hosted the holiday event — hundreds of glass creations made by local glass artisans are for sale year-round. The shops also sell unique gifts, accessories, a wide variety of rolling papers, and paraphernalia for bud smokers.

Tucson-based artist Ash Polzer sold her glass pieces at the event and hopes to get her creations into Bud's stores. "I'm from Tucson Torch Works; we have a place where we teach glass, and there are also resident artists. I recently just returned from Italy; I went to Murano, the glassmaking island."

With six years' experience in blowing and shaping glass, Polzer still learned a few things in Murano and brought some inspiration back to Arizona. "We have a lot of new students," she said. "There are a lot of people coming into the industry because everything is becoming rec legal, and glass came out of the hole because we had to kind of hide [the artistry], and now it's kinda glorified because it's on Instagram."

Polzer sold glass spheres with glass sculptures inside, including one that contained a miniature Christmas tree. "I blew a 4-inch bubble and had it on a punty. I blew a hole on one side, opened it up, and I have a disc to cap the hole [on standby]. So I inserted the tree and sort of welded the disc piece over the hole to make it look seamless."

She also offered other bubble-type pieces with candy cane-looking elements protruding from their tops.

"My favorite is this Sherlock," Polzer said. "I made it in two hours." The 5-inch-long black, green, and red trumpet-shaped pipe resembles the type of pipe the fictional Sherlock Holmes smoked. Polzer added a miniature rose with leaves onto the pipe, and a friend created the accent piece on the rose. The creation was priced at $60.

In front of the graffiti-painted house that is home to Bud's, Mario was repping Sonoran Roots in Tempe and the Ponderosa Dispensary in Peoria. "[The event's] not a market with your typical plastic bongs anymore," he said. "It's gotten more intricate, and it's come a long way. One thing I like about certain glass blowers is they use opals, adding more energy to whatever you're smoking."

Mario, who asked to be referred to by his first name, oversees the dry care operations at the Sonoran Roots cultivation facilities in Tempe. During Hendy's Heady Holiday, he passed out sample pre-rolls, live resin carts, flower, RR Brothers edibles, and swag.

"Some of the glass looks unreal," he continued. "And the raffles they were giving out were awesome."

Attendees credited Hendy Glass, which is based in Chandler, for hosting the event. "Not many people do this for glass artists," Adam Montañez said. "For one glass artist, Hendy, to do this for the rest of us, it's pretty fucking awesome."


Montañez, who goes by @The_Glass_Dream on Instagram, has been creating glass pipes and rigs for four years. He had a table at the showcase filled with his recent pieces. "Making the glass is kinda easy. In the end, selling it is the tough part," he said.

He was selling a blue iridescent-colored Sherlock for $250. It featured gold fumes that had a greenish tinge when hit with a particular light. It's "like sparkly blue on the wig wag," he said. "It's got three large opals and two diamonds on it."
KEEP PHOENIX NEW TIMES FREE... Since we started Phoenix New Times, it has been defined as the free, independent voice of Phoenix, and we'd like to keep it that way. With local media under siege, it's more important than ever for us to rally support behind funding our local journalism. You can help by participating in our "I Support" program, allowing us to keep offering readers access to our incisive coverage of local news, food and culture with no paywalls.
Make a one-time donation today for as little as $1.