But the Federalist piece on the flap was probably inaccurate itself by insinuating that Fischer made the mistake on purpose. On top of that, the article dripped with unintentional irony in its complaints about "media bias," being written by an anonymous author and including misleading statistics about the danger of marijuana.

Fischer's error appeared in an article about Arizona Attorney General Mark Brnovich's idea that the Arizona Legislature should pass a law legalizing cannabis before voters have the chance to pass an immutable ballot initiative on the matter next year. The article was published in the Arizona Capitol Times and other newspapers around the state on July 22.  It also indicated — incorrectly, it seems — that Ducey might agree with that idea. 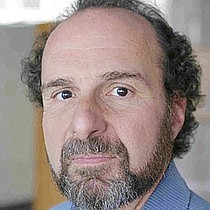 Howard Fischer of Capitol Media Services
Twitter
Fischer is practically an institution in Arizona, an award-winning veteran journalist who's covered the state since 1982 and run a one-man news service since 1991. He's a kick to watch at press conferences with questions and a demeanor toward politicians that often takes a biting tone, although the news pieces he produces and sells to various Arizona newspapers are always more straightforward.

In the July 22 piece, Brnovich stated, "Generally speaking, as a matter of public policy, the public policy makers, i.e., the Legislature, should step up and address issues so voters don’t have to do it via the initiative process."

That part was fine. But Fischer also reported, "Gov. Doug Ducey, who remains personally opposed to recreational use, said he is open to the possibility of signing such a law as an alternative to an initiative.”

As the Federalist article stated accurately, "Ducey never said this."

The writer of that article, who alleges to be an Illinois lawyer and admits "Warren Henry" is a pen name, ultimately accuses Fischer of journalistic corruption: "Even those who disagree with Ducey can agree journalists should not misrepresent his views and arguments merely because they are becoming less popular and he is a Republican governor."

Fischer, in statements to Phoenix New Times, denied purposefully misrepresenting Ducey's views. He said he moved to fix the record as soon as he got the call from the governor's office.

"I may have misinterpreted what the governor was saying about whether he would sign such a bill," he said. "I made it abundantly clear in the story, though, that Ducey was personally opposed to legalization. ... But I also pointed out that he acknowledged the problems with enacting something at the ballot which cannot be changed versus having it vetted and approved by the Legislature in a form that can be amended."

Patrick Ptak, Ducey's spokesman, later released a transcript on Twitter of the interview between Ducey and Fischer, which showed Ducey had been clear that he remained opposed to a recreational marijuana law like California or Colorado's.

But the transcript also shows that Ducey was not as straightforward as he could have been, backing up Fischer's statement that he made a faux pas, not an intentional fake-news smear on a top politician he regularly covers.

"You know how I feel about recreational marijuana," Ducey said during Fischer's interview.

Then Ducey seemed to waffle, adding, "before I say anymore about recreational marijuana, I'll want to see the language." By that, he apparently meant the language of a proposed ballot initiative or legislative bill.

But why would he need to see "the language" if there were no possible way he would support a cannabis-freedom law? And Ducey goes on in this vein, telling Fischer that he's concerned a ballot initiative might have "unintended consequences," that "we have a legislative process for a reason," which is to "improve policy," and he wants more "specifics" before he says anything more about the policy.

Fischer's article cast Ducey's position poorly, but the governor did seem to leave wiggle room in his answers.

"Would love to tell you that in 49 years in the business, writing multiple stories a day, I never made mistakes," Fischer told New Times. "As you know, all we have in this business is our credibility. I've managed to maintain mine through eight governors I've covered."

The Federalist's anonymous writer graciously pointed out that Ducey's on the wrong side of history when it comes to cannabis, and that even most Republicans now support legalization. But the writer adds that "some of the data on this issue support Ducey's position" that marijuana is harmful.

"Marijuana-related traffic deaths increased by 48 percent in Colorado after the state legalized recreational use of the drug," the Federalist writer stated. The writer also noted that a study showed a rise in hospital visits after Colorado passed its recreational law, and that "cannabis-related emergency department visits at UC Health University of Colorado Hospital rose more than threefold from 2012 to 2016."

The alleged attorney should have done his or her homework better. In fact, Colorado authorities believe the number of traffic fatalities directly due to cannabis impairment has decreased significantly, and that the "48 percent" figure is misleading because THC stays in the bloodstream for weeks after impairment. The study on hospital visits was not considered definitive on possible problems with legalization. And cannabis-related hospital visits? While they're problematic, get real — an average of five people die in Colorado each day from excessive drinking.

Naturally, the anonymous person doesn't offer an email for comments on this article about journalistic credibility. Neither The Federalist nor Ptak and Ducey's office responded to messages seeking comment.
KEEP PHOENIX NEW TIMES FREE... Since we started Phoenix New Times, it has been defined as the free, independent voice of Phoenix, and we'd like to keep it that way. With local media under siege, it's more important than ever for us to rally support behind funding our local journalism. You can help by participating in our "I Support" program, allowing us to keep offering readers access to our incisive coverage of local news, food and culture with no paywalls.
Make a one-time donation today for as little as $1.