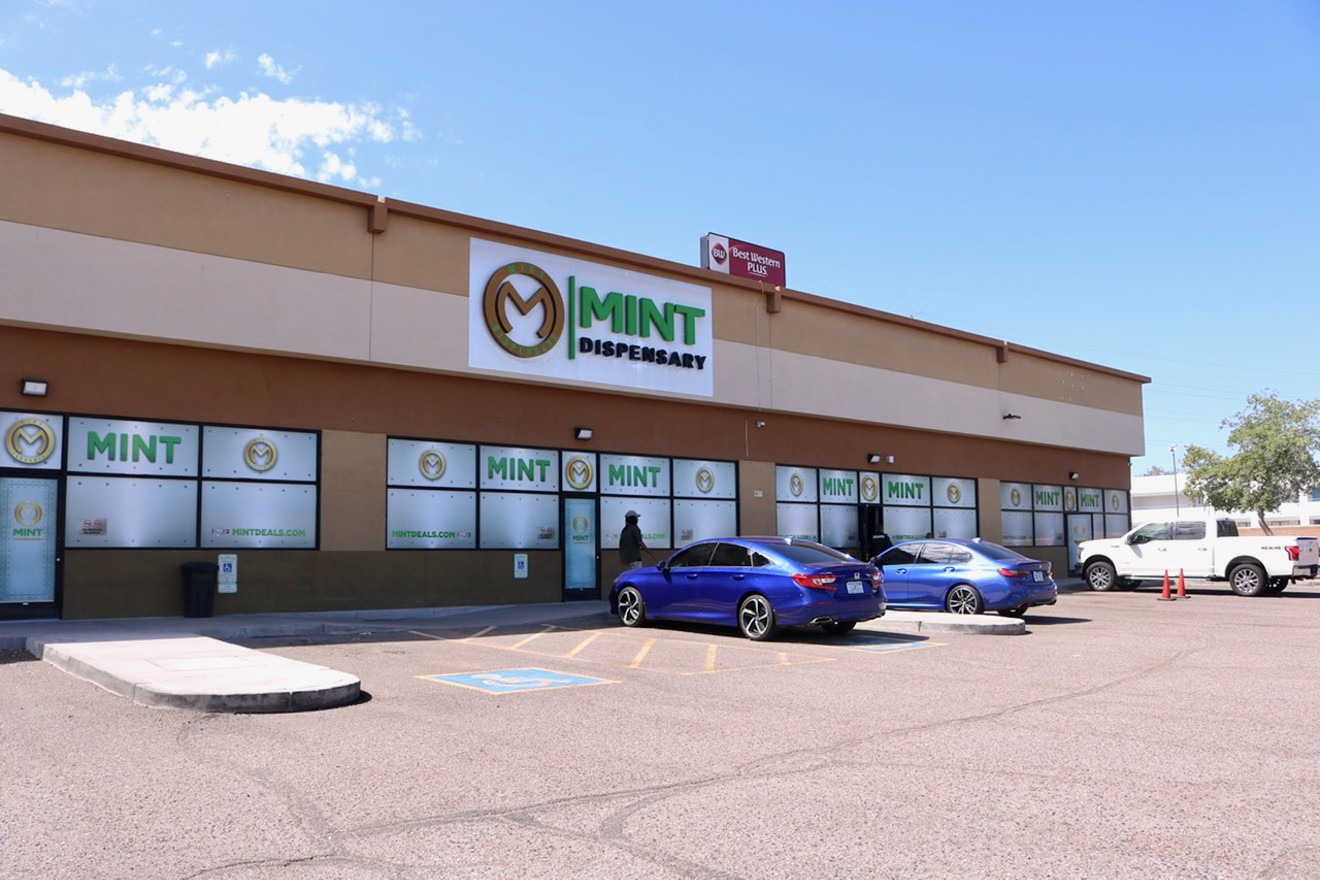 The Mint Cannabis store on South Priest Drive will start 24-hour operations on Thursdays, Fridays, and Saturdays in mid-October. Mike Madriaga
Mint Cannabis made history in Guadalupe in March. Now, the cannabis operator is readying to score another Arizona first — also with its flagship store in Guadalupe.

On September 8, the Guadalupe Town Council voted 4-1 to allow medical and recreational dispensaries to stay open 24 hours a day, seven days a week. Mint’s Guadalupe dispensary on South Priest Drive, the largest dispensary in the state, will become the first to remain open around the clock when the new zoning amendment takes effect in mid October.

"This was actually a text amendment started by the town in the hopes of generating more sales tax revenue," Raul Molina, chief operating officer of Mint Cannabis, told Phoenix New Times. "We can't wait to see everyone after midnight."

The state regulates dispensaries and mandates that they be open at least 32 hours a week but municipalities can set the hours. Before the vote last week, Guadalupe allowed dispensaries to operate between 8 a.m. and midnight. In March, the Mint Cannabis in Guadalupe became the first in the state to stay open until midnight.

"We are the first one open past 10 p.m. by going to midnight, and now the first ones open after midnight and open 24 hours. We love our industry, and we love our patients," Molina said.

“We’re grateful to have the largest dispensary in the state right here in our backyard, as the tax revenues they generate help our schools, residents, and town services," he said in a prepared statement.

Around the Clock Pot Starts in October

Miss Tootsie Pop, a Mesa resident and Instagram model, has been a medical patient with Mint since 2018.

"I think the Mint dispensary being open 24 hours is absolutely game-changing," she said. "Not everyone is on the same 9-to-5 schedule. Realistically, half of us are so busy we don't even realize we are out [after hours] until we go home to relax, and typically by then, the dispensaries are closed or not even open yet."

The Guadalupe dispensary has a drive-thru that provides increased access and added convenience, as well as an expedited option to pick up medicine.

"The Mint is now making it of ease to stay medicated with quality products around the clock," added Miss Tootsie Pop, who has been medicating for 10 years.

As Mint Cannabis in Guadalupe prepares to be the first dispensary in Arizona, and among just a handful of in the U.S., to shift to 24-hour operations, it will do so in steps. It will start with all-day hours on Thursdays, Fridays, and Saturdays. If that goes well, the company may expand its hours to include more days.

The change to Guadalupe's zoning ordinance kicks in 30 days after the vote. To celebrate, the dispensary has planned a series of events in October.

On October 13, the store will offer a live DJ, a variety of "Midnight Madness" buy-one-get-one deals, and free prizes and giveaways throughout the night. In addition, anyone ages 21 and older who cruises into Mint's flagship store on October 13 will receive a 25 percent discount on purchases. At midnight, the first 100 people ages 21 and older who shop at the store will receive a goody bag with product and swag. Anyone over age 21 who visits the dispensary between midnight and 8 a.m. on October 14 will receive a free pre-roll.

Mint also stressed that the 24-hour store in Guadalupe offers a well-lit parking lot, scores of security cameras, and security guards. The 12,000-square foot dispensary also includes a built-in cannabis cultivation center, a cannabis-infused kitchen, and delivery service.
KEEP PHOENIX NEW TIMES FREE... Since we started Phoenix New Times, it has been defined as the free, independent voice of Phoenix, and we'd like to keep it that way. With local media under siege, it's more important than ever for us to rally support behind funding our local journalism. You can help by participating in our "I Support" program, allowing us to keep offering readers access to our incisive coverage of local news, food and culture with no paywalls.
Make a one-time donation today for as little as $1.