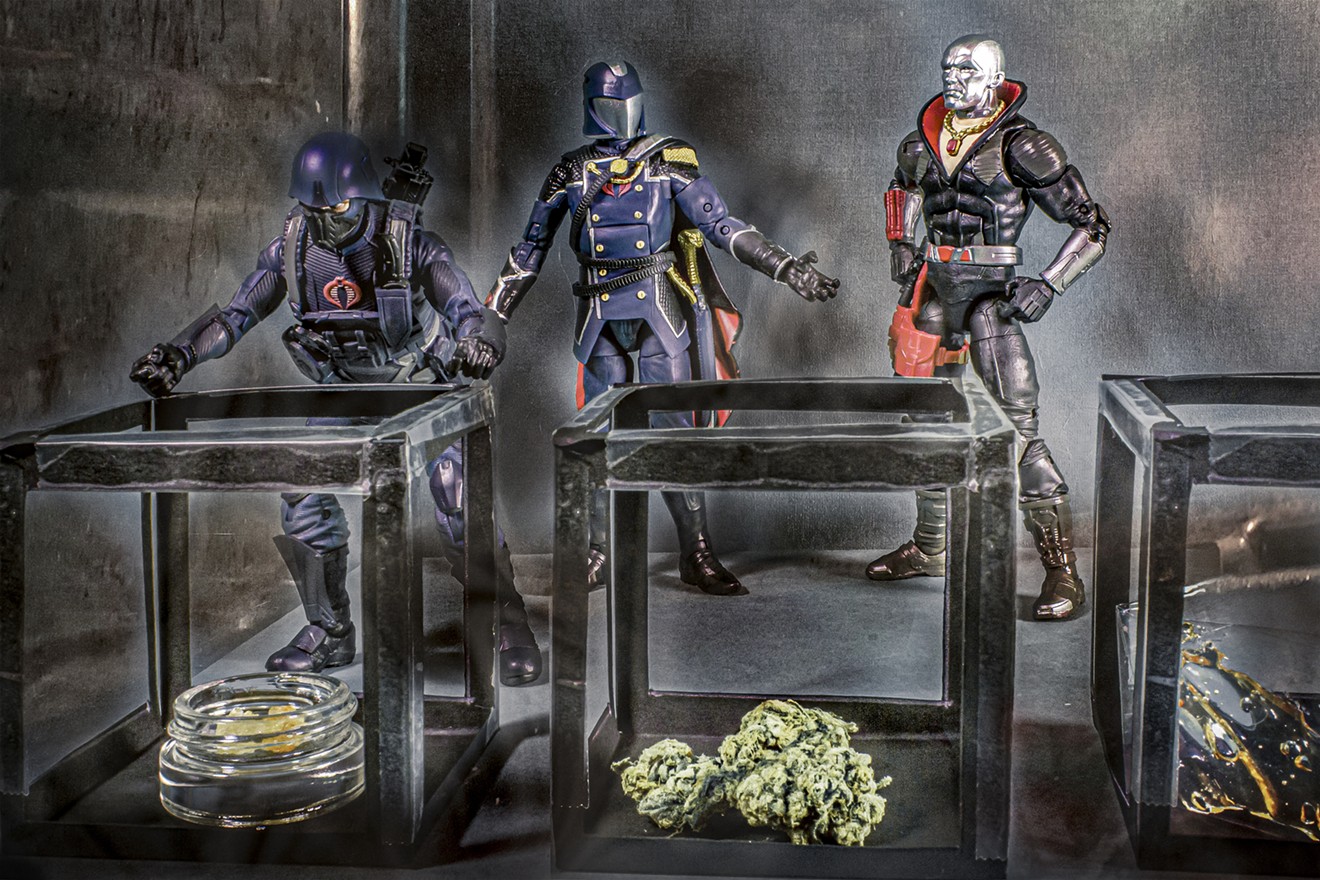 Craig House: "Destro needs three catalytic elements to power his M.A.S.S. device. I made a little cube container out of construction paper and put a bud, a glass container of wax, and cellophane of shatter, in place of the three elements." Craig House
When '80s toy collector Craig House recently found out about cannabis-related toys on the market — he tripped out, as he never knew about the niche action figurines, despite them being in plain sight from his Peoria backyard.

"I know plenty of toy collectors online that also consume cannabis. The two seem very much connected," he told Phoenix New Times on June 8. "I would love it if someone would make Half Baked action figures; I think it would be hilarious to have [toys or dolls of character] Thurgood Jenkins and Dave Chappelle [who starred in dual roles] smoking."

There is no word of the 1998 stoner comedy flick getting its own Sir Smoke-a-Lot action figure. Although there's a glimmer of hope for House, a 44-year-old numbers cruncher and medical marijuana patient, who makes G.I. Joe toy dioramas and hosts the "Craig Does G.I. Joe Voices" YouTube page.

Marijuana users portrayed on the silver screen and the old MTV have gotten head nods from doll makers and action figure conglomerates. And one world-renowned weed-smoker toy design is making its way to Phoenix Walmarts in mid- to late-June.

But it took what felt like eons to get to this point.

Marijuana was stigmatized in the action figure market as recently as the early 1990s. The notion came from an almost 4-inch-high G.I. Joe action figure that infiltrated metro Phoenix's now defunct Toys "R" Us, KB Toys, and Kmart stores. House explained the "G.I. Joe character named 'Headman' was a villainous drug dealer. I'm not sure exactly if he was selling dangerous drugs or harmless plants, but the character premiered in 1992." 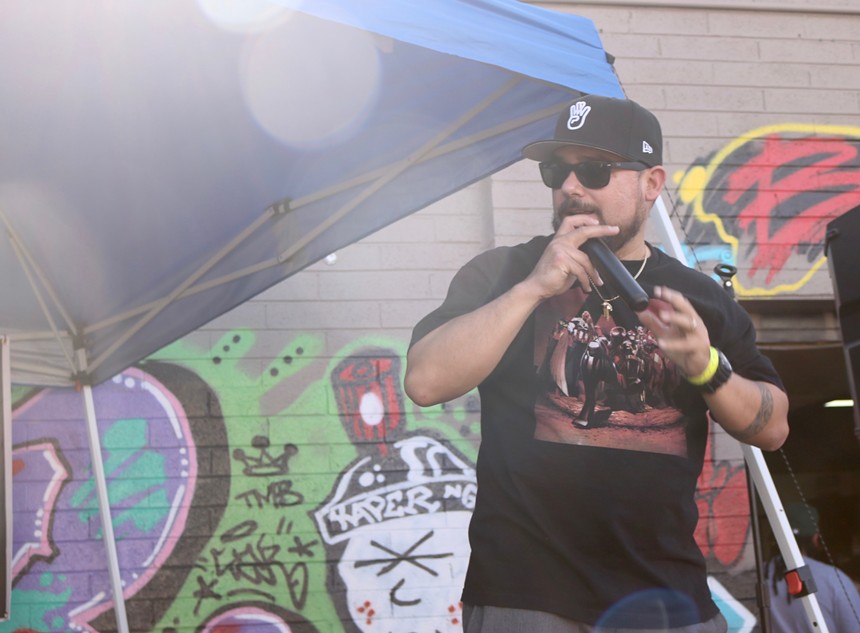 Kahlee performs on stage at Trill on April 30.
Mike Madriaga
Local recreational users and medical card holders such as House push the "real American hero" storyline further than what was portrayed on Saturday morning cartoons. Many in the two groups hypothesize that Headman was a pioneering "cannabis entrepreneur" based on the Hasbro toy's cardboard packaging. Behind the action figure's black-colored double-breasted blazer and poison-tipped steel-pointed boots, there's a green-colored graphic resembling a blob of marijuana plants.

"Oh, yeah, there was a whole 'say no to drugs' subline for G.I. Joe figures," added David Crowe of Collectors Marketplace on East Indian School Road in Phoenix. "Headman was the bad guy in that line ... he was the drug dealer bad guy, and there were his drug dealer goons."


After the Headman henchman toy made its rounds — in the Valley's big box stores, toy conventions, garage sales, and thrift shops — he'd no longer need his electronic battle-flash missile launcher to protect his stash from drug-fighting G.I. Joes in the D.E.F. Because in '96, California became the first state to legitimize medical cannabis. Other states followed suit, including Arizona. Hereafter, Arizona G.I. Joe toy collectors would never view Headman the same way — which paved the way for future marijuana-related action figures, which were now represented as the "good guys."

Crowe says his vintage toy store doesn't have the Headman toy in stock, but it is for sale on eBay for $99.99. Headman's narcotics guard figure is on sale for $199.99. A considerable markup from its $6 price tag 30 years ago.

Two weed flicks inspired toys in the 2000s: Clerks in 1994 and Mallrats in 1995. Crowe recalls they "had Jay and Silent Bob — Kevin Smith's masterpieces about marijuana. They've done a lot of action figures with them, so they've had some marijuana paraphernalia with them.

But for Jay and Silent Bob Strike Back (2001), they did the full Bluntman and Chronic action figures to marijuana leaf throwing stars." Bluntman and Chronic appeared in the 1997 Chasing Amy romantic comedy-drama movie, but the toys weren't produced yet. "They are now going for $50 to $60 if they're still in the package," Crowe said.

"Then there were both Cheech and Chong action figures," he added. "They were made in the '90s to early 2000s. That's when action figures became big and people still getting all sorts of licenses."

A block or so west of Collectors Marketplace, more toys are for sale at Trill, New Times' 2021 Best Hip-Hop Shop. On April 30, rapper Kahlee performed at the Trill store's third-anniversary shindig. Afterward, he wandered into the store looking for weed-inspired toys. "I'm looking for the Dr. Greenthumb Funko Pop!" he said, "I've been waiting on this."

In February, the Funko toy company tweeted that the 4.5-inch toy — modeled after OG-cannabis rapper B-Real from Cypress Hill — would be droppin' soon. Kahlee, who drove into Phoenix from Southern California, said he likes B-Real's design, but says the plant he's holding resembling "The Little Shop of Horrors plant is wack." 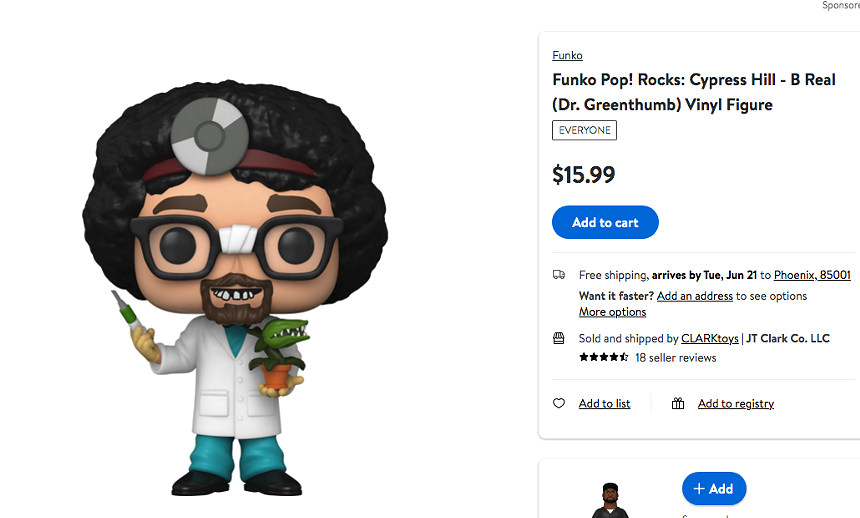 Kahlee found out the Dr. Greenthumb toy would ship to Phoenix in "mid-June to the beginning of July."
Walmart.com
"The collectibles are part of my home studio decor, creating a dope vibe — like art," he added. "I also have The Dude and Walter toys from The Big Lebowski film, which is one of my favorite stoner flicks."

Kahlee, who smokes pre-rolls and vapes, rapped the song "I Used To Love Her" — a spinoff of rapper Common's song, where he raps about his off-and-on relationship with Mary Jane, aka marijuana.

He found out later that Saturday, the Dr. Greenthumb toy would ship to Phoenix in "mid-June to the beginning of July; I'll wait."

"It's crazy that Cypress Hill/B-Real has been leading the fight to legalize cannabis for decades, and now weed's becoming so mainstream that Funko is creating a toy based on it," Kahlee concluded. "On the same token, it's kinda silly that even though cannabis has become mainstream, they changed Dr. Greenthumb's plant. It's probably more appropriate for other age groups."
click to enlarge 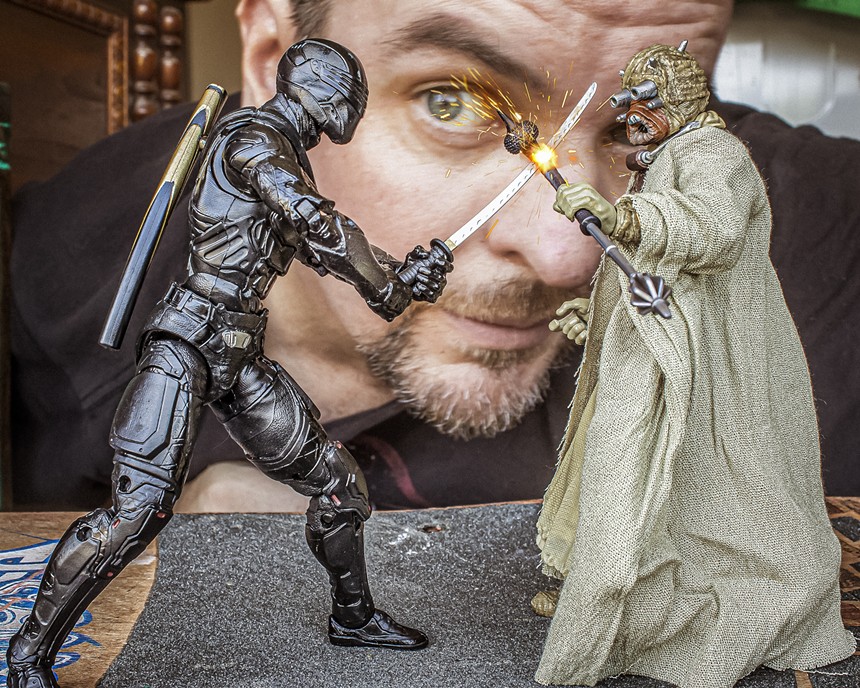 Craig House builds a diorama at his Peoria home.
Craig House
In the meantime, House will continue to create custom dioramas with his G.I. Joe action figures and weed and concentrate in his Peoria backyard to promote his YouTube channel. His last creation had a Destro action figure "in which Destro needs three catalytic elements to power his M.A.S.S. device," he explained. "I made a little cube container out of construction paper and put a bud, a glass container of wax, and cellophane of shatter, in place of the three elements."
KEEP PHOENIX NEW TIMES FREE... Since we started Phoenix New Times, it has been defined as the free, independent voice of Phoenix, and we'd like to keep it that way. With local media under siege, it's more important than ever for us to rally support behind funding our local journalism. You can help by participating in our "I Support" program, allowing us to keep offering readers access to our incisive coverage of local news, food and culture with no paywalls.
Make a one-time donation today for as little as $1.