The Wonderful Balance of Weed, Freestyling, Vibing, and VortiFest in Sedona 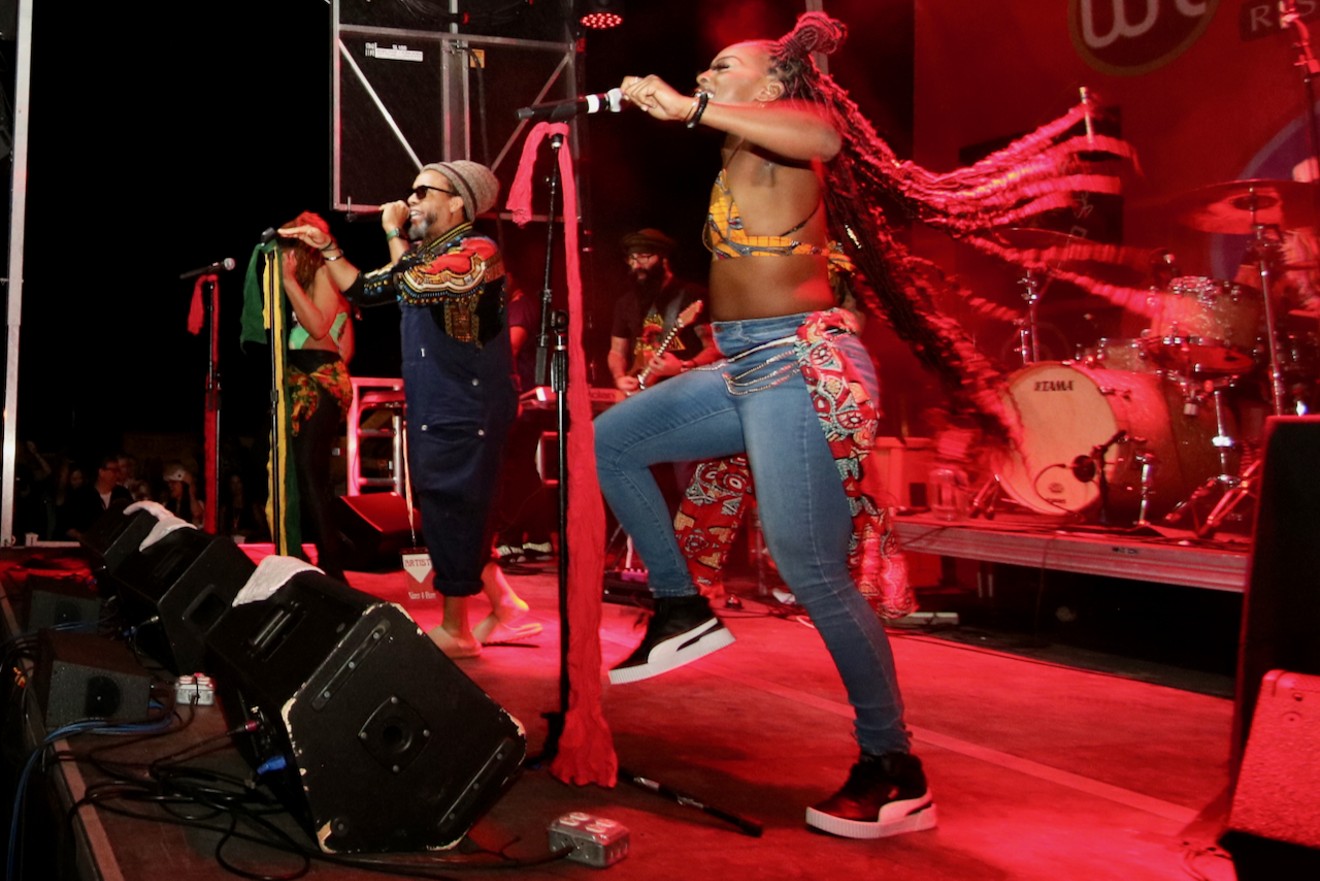 Arrested Development performed at VortiFest on September 24. Mike Madriaga
For cannabis consumers, flowing into Mother Nature is a natural movement, especially if there's a mystical allure, a slight break from the heat, and great music to rock out to. That was the scene at VortiFest in Sedona late last month.

The renowned holistic and healing city in the heart of Arizona's Red Rock Country provides a different trip, cannabis consumers say. So Phoenix New Times checked out VortiFest — organizers billed it as a music festival and experience — to scope out the cannabis culture during the event. It took place on September 23 and 24 at the Sedona Performing Arts Center and Sedona Red Rock High School stadium fields.

Two-time Grammy Award-winning hip-hop group Arrested Development co-headlined the show. New Times caught up with lead guitarist JJ Boogie and vocalist One Love as they smoked Jeeter Durban Poison pre-rolls near their private tent backstage. "We're from Atlanta, and it's not legal yet," JJ Boogie said. "They need to legalize it everywhere, and everyone that's locked up needs to be released."

In Georgia, people with medical cards are only permitted to purchase CBD in the form of extracts that are low in THC and high in CBD. It's a different cannabis world than the one found in Arizona, which legalized recreational use in 2020.

One Love, who says he's been smoking weed since he was a teenager, added, "Georgia will probably be the last place to get legal. They are making too much money putting people in jail just for smoking a joint."

While Speech — rapper-and-vocalist and co-founder of Arrested Development in 1988 — said he doesn't consume cannabis, he told New Times earlier this summer that it should be legal in every way, not just for medicinal use but also for casual use. "I also feel that nonviolent offenders who were imprisoned just because of selling or having weed, those sentences need to be revoked because obviously there are now legit business owners selling the same product," he explained.

Before their performance, some members of Arrested Development stocked up at the Curaleaf dispensary in Sedona. "Shout out to Miss Love at Curaleaf," JJ Boogie said. "She checked us in the dispensary today."
click to enlarge 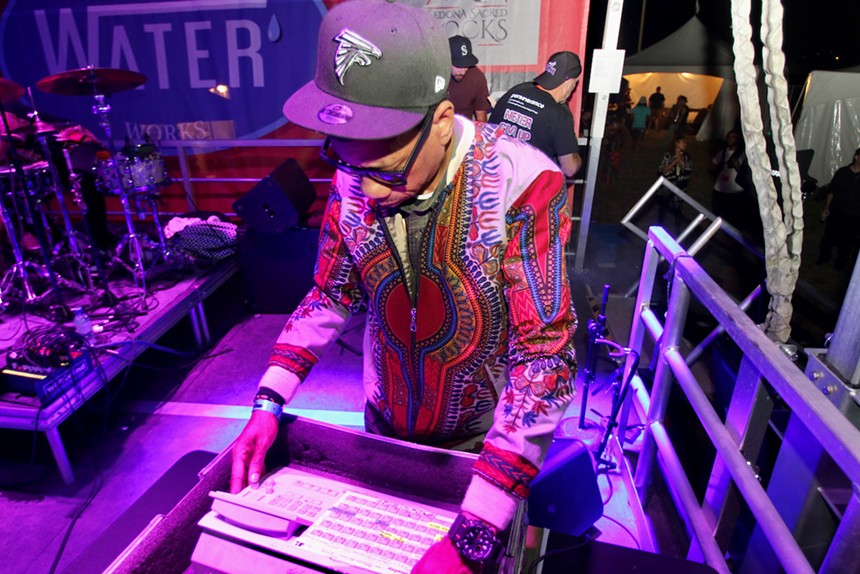 Arrested Development, including vocalist One Love, performed at VortiFest in Sedona on September 24.
Mike Madriaga

'The Customs of Consuming'

Though Proposition 207 legalized recreational cannabis use in Arizona, there's still a mixed bag of feelings when it comes to smoking weed. That was true even at an open-air concert in Sedona, a city with a long history of pot smokers, hippies and mystical magic.

Outside of the fenced-off and guarded backstage and VIP areas, in the central venue allotted for 3,000 concertgoers, folks were a bit more discreet when smoking weed out of respect for the event, venue and other attendees. Some who admittedly consumed cannabis were reluctant to go on the record with New Times.

"It's about the customs of consuming," Chase Brendle said. "Even when I was smoking in college, we had rules. You sat down at a table and [the joint] only went to the left, and here, we have that same etiquette."

Brendle is the founder and owner of Lacuna Kava Bar, with locations in Phoenix and Sedona. He had a booth at the festival that promoted his kava bar in Sedona, which has a cannabis-friendly patio. "Like, if there's a couple next to you and you can tell they're not into [weed smoking], please go take a walk," Brendle said.

One member of Phoenix Afrobeat Orchestra agreed with Brendle. "As a polite smoker, when you smoke tobacco or cannabis, the polite thing to do is move away from crowds who don't smoke. Especially if there are kids. Let the kids experience that on their own when they grow up." The band member, who had just smoked a High Grade pre-roll, requested anonymity over concerns that his employer in the Valley might find out.

"Weed gives me a wonderful balance, and I focus on what I need to do when playing my instruments," the musician added. "As a musician, there's so much more elation when performing; I think it adds to the elation."

Phoenix Afrobeat Orchestra, which is composed of 12 musicians from metro Phoenix, performed their meld of funk, harmonizing and chanting, jazz, and percussion — exhibiting their signature Afrobeat sound.

Desi, a 32-year-old former Marine, sat on the grass and watched the group perform while smoking concentrate via a vape pen. She asked to be identified only by her first name.

"I didn't know if [smoking] was allowed here, but I'm beginning to see this place is filled with people just having a good time and smoking and vibing. I'm pretty high right now. Look around, and you see people dancing and not giving two shits," she said.

In front of the stage, more than 100 people grooved to the music, including two people in flowy white outfits adorned with LED lights. Parents and guardians held their children on top of their shoulders, allowing them to get a better view of the stage. Other concertgoers sat comfortably on their blankets and sleeping bags or in their pitched tents.

"Just being here and having the band play in front of you makes you, like, super chill," Desi said as she hit her vape pen. "We're going to go camping after this at the Avalon campgrounds. We set up a tent there. I was in awe of the red rocks when driving in."
click to enlarge

Grammy Award-nominated G. Love & Special Sauce was the second headlining act. The group flew in from Philadelphia and performed their laidback mix of soul, blues, hip-hop, and rock. The Yawpers, Banana Gun, Adam Bruce, Damiyr, and decker. were also a part of the all-star lineup.

In addition to being the guitarist, singer, songwriter, and frontman for his eponymous desert-folk and psychedelic band, decker., Brandon Decker also was one of the four event organizers of the festival.

"Sedona is one of the most awe-inspiring locations in the world," he said. "We wanted to create a festival experience that reflects that. We intend to also have one of the top festivals in Arizona. It's a must-attend Coachella-type thing."

The festival welcomed people all ages. The event's promoters said that about 50 percent of VortiFest attendees were from metro Phoenix.

There was a kid zone where children could play while their parents or guardians consumed beer and wine in designated areas, and families could rendezvous later by the food truck to get a bite. A vendor village showcased local artisans and metaphysical and spirituality booths, including Believe Ranch and Rescue. The organization offered divination sessions with Cece the horse that helped attendees to "connect with their higher soul."

Aalia Kazan sold Ascend Hemp Oil in one of the many booths. Kazan had just smoked a joint before talking with New Times. "Just being here, in Sedona, is trippy without cannabis as well," she said. "It's super magical here; little animals show up, and it's like a fairytale."

Kazan's hemp oils are activated with sound and crystal energy. The oils are high in the peripheral cannabinoids and "super high, 52 percent CBD from co2 extracted organically grown hemp," which she claims "gives excellent results for all kinds of pain and discomfort."

"I always used cannabis to help my stress, anxiety, and OCD," she said. "It makes me feel more in touch with my heart."

While marijuana use in Arizona is not permitted in public spaces, Kazan said that Sedona has offered a pretty relaxed approach since recreational use became legal two years ago.

Soon, it was time for Arrested Development to perform. Many of the vendors closed their booths to watch the group's energetic show.

One Love and JJ Boogie offered some final comments before taking the stage.

"As I got older, I started educating myself more about [cannabis]," One Love said. "I learned more of the medicinal side of it as I deal with a lot of acid reflux and digestive issues; that's why I smoke it for now." JJ Boogie added, "It's great for anxiety, depression, nausea issues. And I found it helps with fevers."

One Love admitted that smoking weed is also fun, especially when "I was in high school and an emcee. You know, freestyling on weed seemed like it helped me get the craziest freestyles."

Freestyling is a method of rapping in which the rapper spontaneously recites lyrics on the spot. The wittier and more fluid the rhymed verses are — the fresher the rap. Then, if the rap verses are cohesive and tell a story, hat's a wrap.

One Love hit on all aforementioned points, as witnessed when the Atlanta-based group performed "Ease My Mind." He hopped on the mic and rapped some quick, fluid verses. The crowd, almost filling up the grassy field area in front of the stage, cheered him on as his lyrical delivery accelerated.

Arrested Development performed some of their newer songs, including "Swing Um" and "Bloody," but most of their set was from 3 Years, 5 Months and 2 Days in the Life of… , their 1992 debut album, which garnered the group a Grammy for Best New Artist in 1993. The group performed "Mr. Wendell," "People Everyday," and "Tennessee," which also won a Grammy, this time for Best Rap Performance by a Duo or Group. The Sedona crowd sang the "Tennessee" lyrics in unison with the group as they closed out VortiFest: "Take me to another place, take me to another land."
KEEP PHOENIX NEW TIMES FREE... Since we started Phoenix New Times, it has been defined as the free, independent voice of Phoenix, and we'd like to keep it that way. With local media under siege, it's more important than ever for us to rally support behind funding our local journalism. You can help by participating in our "I Support" program, allowing us to keep offering readers access to our incisive coverage of local news, food and culture with no paywalls.
Make a one-time donation today for as little as $1.