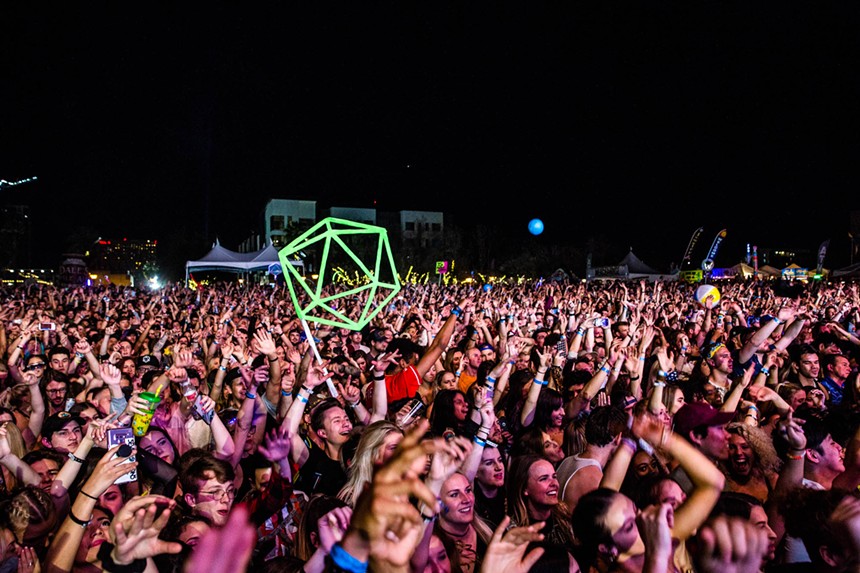 A jam-packed crowd at 2019's M3F.
Jacob Tyler Dunn
Concerts have been back for a short while, and that alone has been cause for robust celebration. But as more venues nationwide line up new shows and tours for the coming months, it's important for everyone take a refresher on proper concert etiquette. How do we deal with things like vaccine cards and social distancing? What's still acceptable in large gatherings, and is there anything better left in the "old" days? Here are 10 tips, hints, rules, etc. to ensure a safe, fun, and socially responsible concertgoing experience.

Some venues, like Crescent Ballroom and Rebel Lounge, will require masks and/or negative COVID tests for shows and events. Venues like Pub Rock Live and Last Exit Live, meanwhile, have chosen to opt out of these mandates. Knowing the rules of the venue that you’re attending is crucial; not only will you be prepared ahead of time, but you’re streamlining the entire entry process for everyone else. If you’re confused, you can always check a venue’s official site for details.

And speaking of being fully prepared, a big part of that may be having your actual vaccine card on the ready. Again, it's not mandatory at every venue, but it is a handy way to prove your status. A physical card, especially one that's already laminated, is often your best bet. But if you opt for the digital route, Apple users can store the info on their Health app (if you've since downloaded the recent iOS 15 update). Perhaps just avoid saving the card among the 11,000 other pics on your phone.

The Mask Stays On

Even if you’re at a venue where mandates aren’t fully enforced, you should still expect to see plenty of people wearing masks. These have become the norm for some concertgoers, and they’re often a way that people can still feel comfortable with larger crowds after all that isolation. If you’re not wearing a mask, proper etiquette is to ignore those who are, and do your best to go about your evening accordingly. We can all have a good time when we make the right choices for our own personal health.

It's not just masks that will remain a regular part of your average concertgoing experience for the foreseeable future. Social distancing is not only a way to further control the spread of COVID, but also to help people remain continually comfortable with large group outings. It's not always going to be easy to keep up this spacing, especially since it's not entirely mandatory at each venue. Instead, it's another chance to work together to ensure the proper mix of access, comfort, and all-around good-times.

Patience Is A Virtue

For artists and concertgoers alike, the concerts of the last couple months represent the end of a near-two-year break. That means that we’re all a little rusty, whether we’re working the sound system or just there to hang out. So, as several local artists advised, give each other ample space, and let people try and sort through the delicate social "dance" of attending concerts once again. That means letting artists, promoters, and venue crew figure out their places and avoiding any undue confrontations. Patience is a virtue, FYI.

A crowd sings along with Circa Survive during a 2019 concert.
Lynn Trimble
Lose The Cellphone

The debate over cellphones at venues raged long before COVID reared its head. But several bands we spoke to explained that now seems like an especially apt time to leave those devices in your purse or pocket. Because as we see our first series of shows since early 2020, maybe now is the time to fully enjoy the show and worry less about snapping that 40-second grainy clip of your favorite song. It’s time to celebrate live music again, and that means a greater level of awareness and engagement.

Much like with cellphones, talking at shows has long been a nuisance bordering on an issue. Since we’re also doing away with terrible phone pics and videos, talking at shows needs to be left in the "before time" as well. Sure, a little mid-set chatting with friends is fine, but if you’re having full-blown conversations, it’s best to take it either outside or away from the crowd proper. Is this also about recommitting to music? Sure, but it's also a great time to change certain "norms" for the better.

Make It A Group Thing

The deaths at November’s Astroworld Festival in Houston, Texas demonstrated some important truths about live events. One is that these outings are often a collaboration between artists, management, and attendees, and that means working together accordingly. It means regular communication between groups, helping out your fellow attendees who might need assistance, and not placing entertainment over the wellbeing of others. If live shows have a future, it's because we make one together.

After 18-plus months away, actually attending concerts seems like an obvious decision for most of us. But as some local artists further explained, it helps to attend shows you might not have otherwise. Check out that band you've had your eye on for a while. Or, see a band at some unfamiliar club that's halfway across town. The more people are out there, attending a variety of shows, the better we're able to support local music, and that's hugely important to reinvigorating the scene as a whole.

The next several months, at the very least, will mean some effort as you hit up various shows. But as several musicians noted, there is a sense that we'll get to something resembling "post-COVID." (Even if it's just what we already have in effect now.) The larger point, though, is that artists feel like if people play by the rules, this can become just another "thing" that crowds get used to (whether that's permanent or not). This new process can be just added steps to the same shared sense of musical appreciation.