Mesa Mixes It Up With Album Art, Tattoo Demo, and Pop-Up Concert

Artist Esao Andrews, the L.A. artist who creates the band’s album art, was born and raised in Mesa. And he has a solo exhibit at Mesa Contemporary Arts Museum, which runs through early August.

Circa Survive are performing a stripped-down set at the museum on Saturday, July 27, inside a gallery filled with Andrews' work. The “Petrichor” exhibit includes oil paintings, skate decks, and a sampling of the artist’s other work – which includes comic book and album art.

Artist Shay Bredimus.
The Widow Brothers
Turns out, it’s just one of two creative events at the museum that weekend. Shay Bredimus, another artist based in L.A., will be doing a tattoo demonstration on Friday, July 26. His work is featured in an exhibit called “Cartomancy – The Seni Horoscopes,” which was inspired by German fortune-telling cards from the 17th century.

Bredimus is having his own full-circle moment.

Nearly 20 years ago, he studied life drawing with Jim Garrison at Mesa Community College. Now, he has 72 artworks on view at the Mesa museum, each revealing his facility with combining fine art and tattoo art sensibilities. Every piece pairs a contemporary portrait with a pictograph from the 72-card deck he discovered several years ago while traveling in Japan.

He’ll be tattooing one of those images at the gallery Friday night, for a client who already has three of his designs. In addition, the museum will have temporary tattoos for visitors and free tarot card readings. 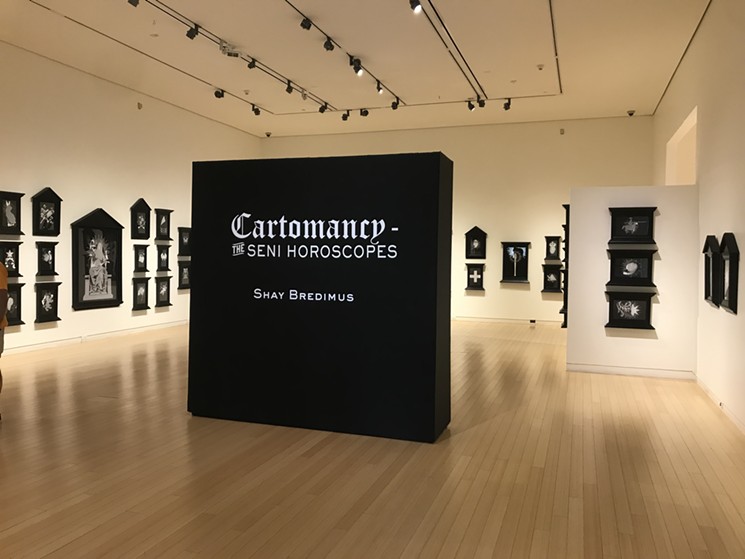 Checking out Shay Bredimus' artwork at Mesa Contemporary Arts Museum.
Lynn Trimble
More than 900 people turned out during the opening reception for both exhibits back in May. But Circa Survive won’t see the shows until this week, when they’re performing a pop-up set before heading over to Ak-Chin Pavilion to play the Disrupt Festival.

They’ve played venues ranging from Coachella to the SXSW Music Festival, and opened for bands including Linkin Park and My Chemical Romance. But guitarist Colin Frangicetto, who is also an accomplished visual artist, says this performance will be a first. “This is the first time we’ve played in a gallery,” he says.

There’s a display case inside the gallery filled with Andrews' illustrations for comic books and album covers, and a gallery wall with early drawings for some of the surreal paintings in the art show.

His painting The Amulet shares its name with the band’s latest album, which features the same haunting image of a nude woman carrying an oversized seashell amid a landscape that references both destruction and new growth. Andrews will be there for the pop-up performance, where he'll also be signing album art. 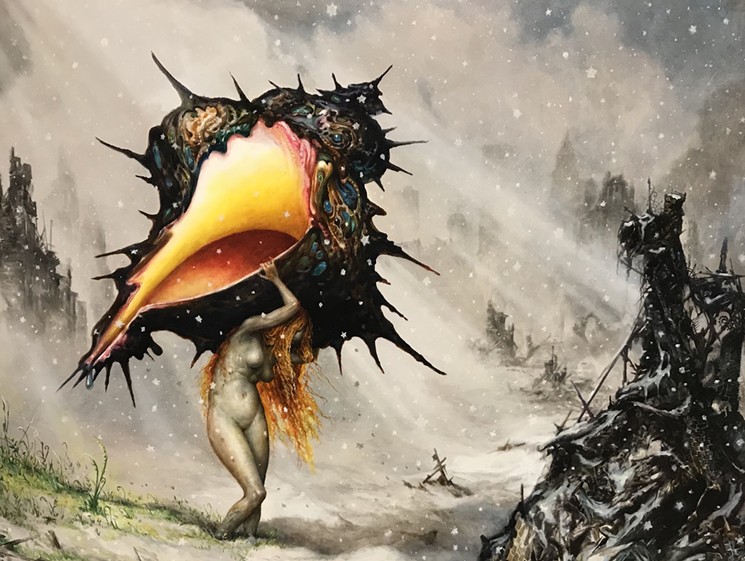 Checking out Esao Andrew's art used for Circa Survive's The Amulet album at Mesa Contemporary Arts Museum.
Esao Andrews/Photo by Lynn Trimble
The band heard about Andrews' work while they were putting together their first album, and decided to ask if he’d be interested in doing the cover art. Andrews agreed after hearing a short demo tape, and he’s been making art for Circa Survive ever since. To date, Andrews has created art for six of their albums and two of their EPs.

Now, they’re looking forward to playing inside the gallery, as a way of showing their appreciation for all the years they’ve collaborated with Andrews. “It’s been a long, symbiotic relationship of nudging each other forward in interesting ways,” Frangicetto says. “Esao really created the visual world for Circa Survive, and we’re grateful for that.”