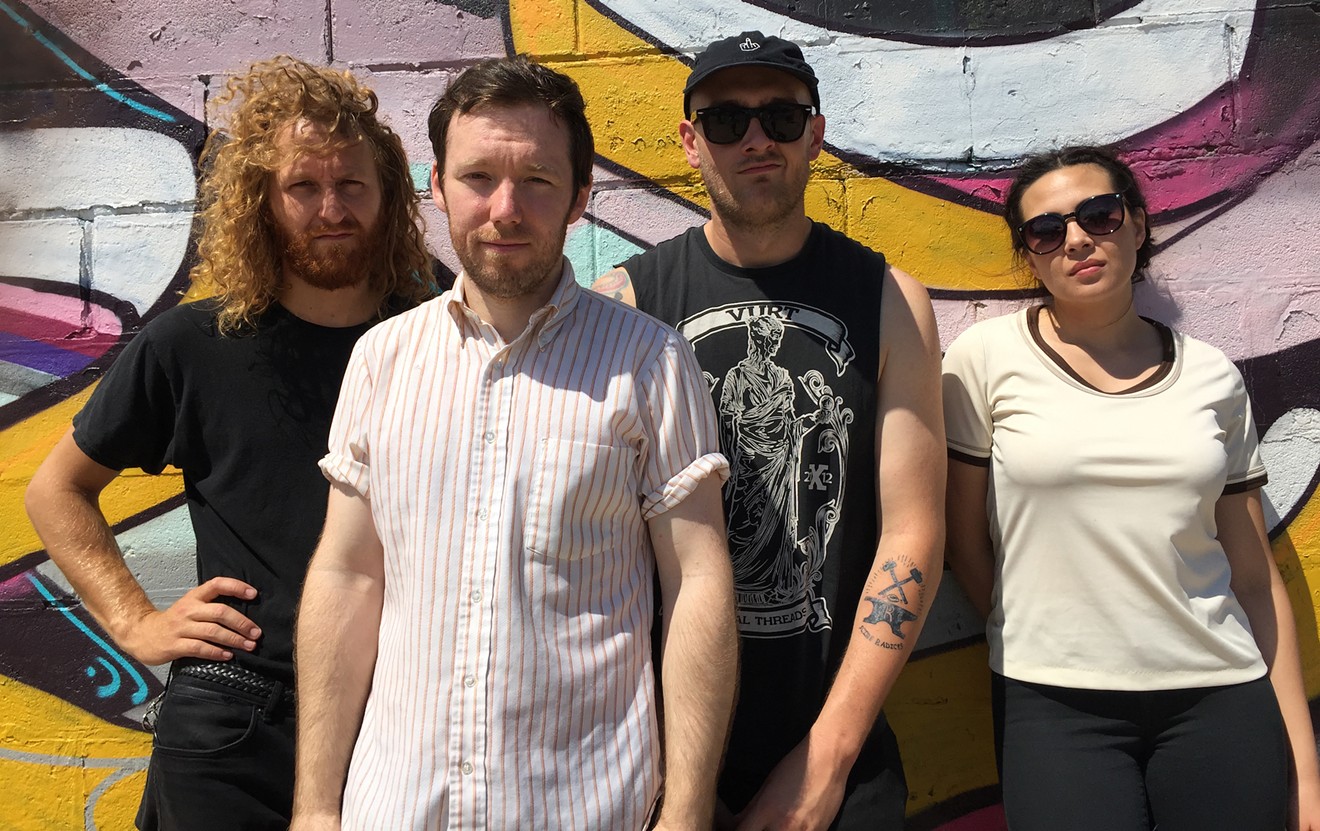 American Wrestlers' frontman is not an American by birth, though we're unsure if he's a wrestler. Evan Cuttler Wattles
Gary McClure, frontman for indie band American Wrestlers, thinks musicians who use Instagram to make themselves seem glamorous are “the worst.”

“You just see people with this supposed image of rock ’n’ roll,” he says over the phone in a lovely Scottish accent. “There’s no mention of the music anymore.”

McClure has been a musician for most of his life, so his feelings are understandable. He is obsessed with the belief that he will never achieve success, despite having some semblance of it with the Manchester noise-pop group Working For A Nuclear Free City. Like many bands, they garnered much acclaim and a small following. Just as that project was winding down, he met Bridgette Imperial, an American studying abroad. A year later, McClure moved to St. Louis to marry her.

McClure continues to toil at his day job loading trucks. Three years ago, he began work on American Wrestlers’ self-titled debut on an eight-track TASCAM recorder and posted the tracks on Bandcamp. Fat Possum Records re-released the record in 2015. Much like his previous musical project, music blogs heaped on the praise, but McClure saw nothing around him change, even when the heartfelt record received a favorable review from Rolling Stone.

“I was in the back of a truck that I was loading,” McClure recalls. “This isn’t how I imagined when I was a teenager that I would see my Rolling Stone review. The music world has changed so much that this is possible now; that [a person] can make a record in a bedroom and send it out and get accolades from prestigious publications and nothing changes.”
Being doomed to replicate history is a theme that haunts American Wrestlers’ follow-up, Goodbye Terrible Youth. The album is an improvement sonically (McClure’s TASCAM broke, so he upgraded to a Mac), but the music remains as passionate and politically charged as its predecessor. For example, the opening track, “Vote Thatcher,” speaks to the brutality inflicted by police and politicians repeating their mistakes. McClure says the song is also about his fixation on death and the legacy he wants to leave behind.

“I just get scared,” he says. “Then you’re in the day job grinding away, getting so bored, and thinking, ‘Fuck, I’m wasting my time here. What the fuck am I doing?’ You feel trapped. You get home, and it’s hard to do anything. It’s this horrible cycle. Every day, I feel like time is running out and it makes me want to write more and more.”

The irony of using a conservative figure like former British Prime Minister Margaret Thatcher as a metaphor as the United States prepares for President-elect Donald Trump is not lost on McClure. His preconceived notions of America, both good and bad, have been shattered in the years he has resided in the heart of the Midwest, from the intellectual conversations he has with fans to the racism that divides the city he now calls home. He firmly believes that a Trump presidency is a bump in the road to a more tolerant liberal society.

“There will be four years of horrible shit, and then we’ll have enough,” he predicts. “We’ll iron it out and be stronger again.”

With the current political climate, McClure says he is not lacking in inspiration for his next album. Yet his co-workers remain unaware of his musical talents.

“[Music] is the last thing I ever want to talk about,” he says. “I would just be known as the guy who plays in a band. It would be small talk.”