10 of the Scariest Live Music Moments in Arizona History 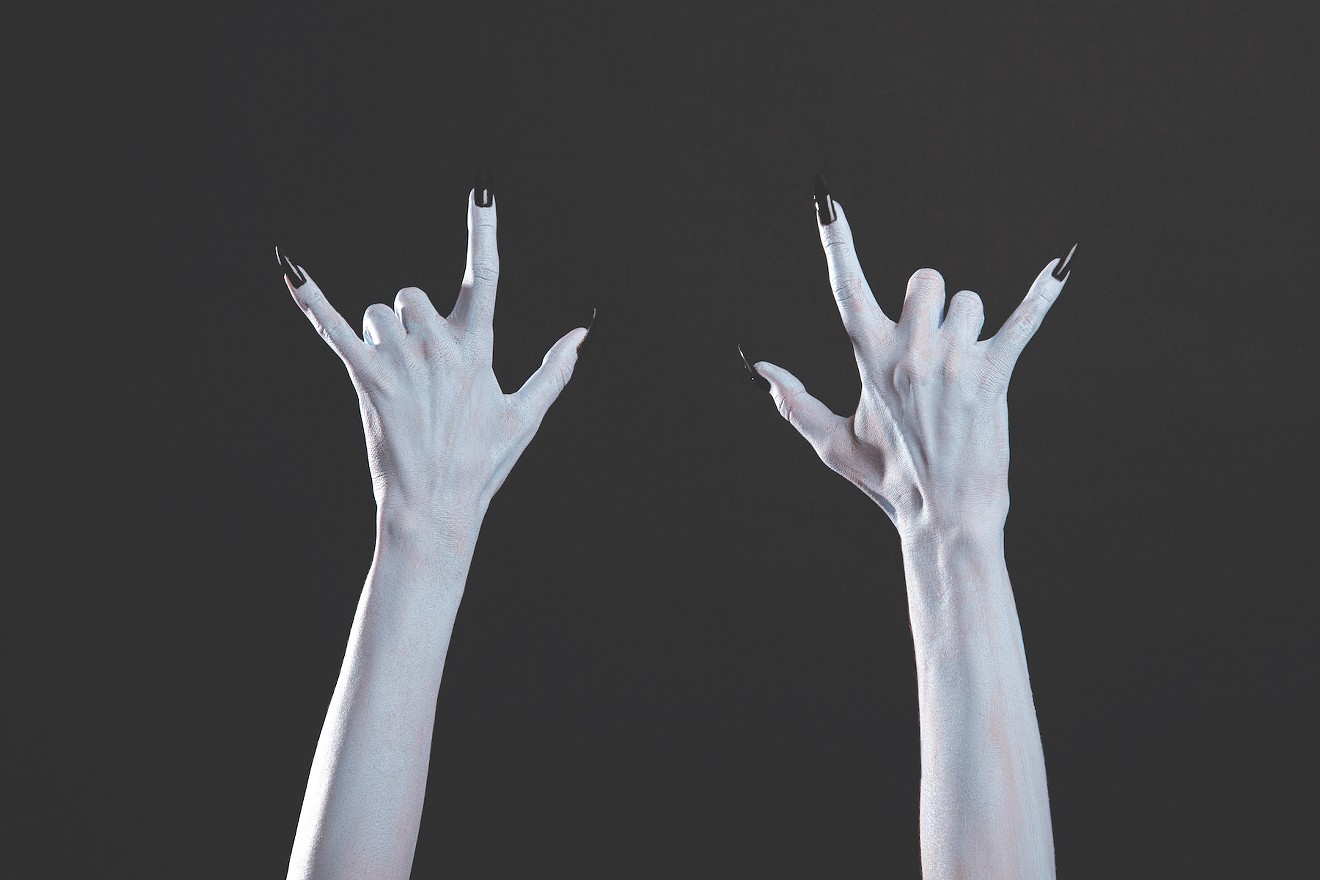 
We’ve all been to shows that got a little scary at times, but until we started asking around, we had no idea how off the chain certain Phoenix shows over the years had gotten. Weapons, riot police, dead animal carcasses — you name it, and it happened at a mosh pit or firewater dispensary near you. Here are some of the most memorable live music horror stories in recent Arizona history, according to several musicians and eyewitnesses. We’ll lob you a few softballs before we start hurling the heavy stuff your way.

Cheap Trick at the Cajun House
July 10, 2001
In the band’s fighting original lineup, which featured Bun E. Carlos pummeling the drums with pool-cue-size sticks, Cheap Trick could always be expected to blow the roof off of any venue. So playing a club with a retractable roof should have been a no-brainer. But the Cajun House was cursed with really weird Scottsdale noise ordinances because of a nearby hotel, so it never did shows with the roof pulled back. And for some reason, the volume at this show was, as Robin Zander complained from the stage, the lowest volume at which Cheap Trick ever had to perform. Worse, there was a 10 p.m. curfew of sorts for live music that resulted in a shortened set so Cajun House’s disco night could begin. Seconds after the Rockford four concluded with “Surrender,” the lights went up, the spinning disco ball came on and “Boogie Oogie Oogie” blasted through the mains. The look on Cheap Trick’s collective faces said it all.

John Cougar at Sun Devil Stadium
November 1, 1982
Not everybody liked J.C. before he affixed Mellencamp to his name. So when his 40-minute set was preventing people from seeing Loverboy and The Who with Kenny Jones, some concertgoers’ thoughts naturally turned to violence. Non-Cougar fan Pierre Fuqua was there for The Who-laween show and remembers that 10 minutes into the Coog’s set, “Someone threw a whiskey bottle at his head.” Cougar left the stage unconscious but returned 20 minutes and seven stitches later. “And then he came out and sang ‘Hurt So Good,’” says Fuqua. That sealed the deal for a lot of folks who had to admire the chutzpah. JD Shazer, another non-Cougar fan there that day, recalls, “The whole crowd was wowed. Only years later did I find out he did that same stunt at every show that tour!”

Mötley Crüe at America West Arena
December 11, 1997
Elders, do you remember what you did on your 39th birthday? If you’re Nikki Sixx, you respond by slapping your forehead and saying, “Oh, yeah, that was the night at America West Arena when I fired the security guard protecting me from my rowdy fans, who then rushed the stage at my invitation.” Sixx and co-conspirator Tommy Lee spent the night in a Phoenix jail for inciting a riot that resulted in $15,000 in damaged arena seating and 10 injuries. Attendee Vincent Capece opines, “I’d say the Mötley Crüe riot defines the word ‘riot.’” Imagine if they’d just decided to celebrate Sixx’s birthday at Applebee’s instead. 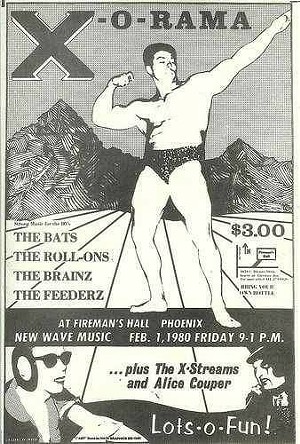 Robin Grotjan
X-O-Rama at The Fireman’s Hall
February 1, 1980
Much thanks to Robin Grotjan, wife of the late Ron “Reckless” Grotjan from The Mighty Sphincter, Maybe Mental, and the Very Idea of Fucking Hitler. She shared the flyers you see here — including the one of Frank Discussion’s project X-O-Rama. Ever wonder how old-school punks celebrated First Friday in 1980? By seeing the guy known as Frank Discussion, naked under a clear rain poncho, performing with live crickets covering his bald head secured by honey. If someone walked into a TV network with that as his pitch, you’d hope that sucker would get made.

Karen Finley at CRASHart
Circa 1986-87
Artist Karen Finley’s performance pieces were designed to push people’s buttons, and included “Yams Up My Granny’s Ass,” where she did not shove yams where the sun cannot reach. Nonetheless, many people remember this CRASHart show as the “Karen Finley yam cram.” Jim Andreas of No Volcano was in Bootbeast Carnival at the time, and they opened the show. “Our guitar player made a very non-PC comment that everyone should stick around after we were done to see Karen shove a yam up her #%^* and we were booed for the remainder of the show … not fun.” Bill Ovid Boyles remembers the show had chicken parts and blood, but no yams. JD Shazer remembers it a bit differently, and estimates that the show took place around Easter, “cuz she was shoving Easter bunny plush toys up her ‘moneymaker’ to the shock and awe of those not prepared for her schtick.”

Deftones and Type O Negative at Desert Sky Pavilion
October 5, 1996
At the 1996 U-Fest, the Deftones came onstage apparently shitfaced, performed about three songs before getting shut down, and singer Chino Moreno said something that sounded enough like “Come on and help us trash this place.” Security guards rationalized they were outnumbered and did nothing while kids ripped up seats, tore the stage curtain, set fires, scaled ladders to catwalks, and mooned a Phoenix police helicopter hovering over the arena. Police quickly responded with riot gear and pepper spray. Musician Michael Baden shot some amateur footage from the side of the stage.

Needless to say, a miffed Type O Negative didn’t get to do their headlining performance and managed to track the Deftones to Club Purgatory later that night. “Type-O’s guitar player and a roadie sought out Chino, the singer of Deftones,” says Baden. “It was interesting to see; we were chilling with the band in a booth ... somehow these two guys tracked the band down across town in a tiny little bar, they walk into the bar, and ask where’s Chino. Someone points to the table and the guitar player heads right up and confronts him, and then all the sinners start swinging!”

Musician Christian Alvarez confirms that Soulgrind, who played the Deftones riot show, “also fought later that night, too.” One spectator, Zia Peroni, recalls, “That’s how I ended up under a huge dogpile of people fighting, about seven people deep. My shoe broke. That was an insane night!” 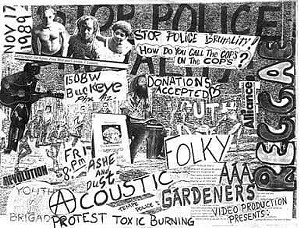 Robin Grotjan
Maybe Mental at AAA Gardner's
Date unknown, probably early 1980s
When someone prefaces what they are about to tell you with, “I am not making any of this up,” you can expect the talk will turn to Maybe Mental, a band who were two-thirds amateur taxidermists. Robin Grotjan remembers Maybe Mental and the band’s spirit animals of sorts. “Ron was in it, David Oliphant, and Donna Anadrillo. At the same time, Ron and Donna were doing taxidermy, and Ron had sewed a dog’s head that he wore at Maybe Mental shows.” Robin was living with Ron by this time and corroborates: “We stored the dead cats in our freezer and Ron’s mom was so freaked out. Ron loves cats, by the way. So much so that he buried them and made cat bone necklaces.”

At the Maybe Mental show at AAA Gardner’s, Robin was working the fog machine. “And Dave was already pissed off because I wasn’t doing it to his standards. They had dead cats and a pig’s head. And the pig’s head was sitting in front of the stage during the show and it had a candle on it, And they had worked a way for it to blow up, but they didn’t think it was going to blow up and have chunks fly on the audience like it did.”

An ill-attended rave with Digital Underground
Exact date unknown, late 1990s
Nothing says sad like a rave that’s less than a rave. Former KUPD jock Bridget Ventura remembers working what was supposed to be “some kind of rave-like extravaganza with Digital Underground. They promoted the hell out of this all-day show. I think 80 people came. The headliners entertained themselves by eating handfuls of ecstasy, then emptying giant bags of popcorn and copious amounts of beer all over the stage, theater, and ‘audience.’ A first-class debacle.”

As Roger Williams remembers, “We went to pick them up from the airport and they had a 10-deep entourage. They all got into a fight after the show and took off. Humpty [Shock G] left his leather jacket there. I’ve still got it.” Although the fights were spontaneous, the popcorn was planned. “They sprayed Champagne all over the place then spread popcorn all over during ‘The Humpty Dance.’ It was like an ice rink. They also had cases of beer that they were handing out to the crowd because the cost of beer at the venue was absurd.”

Cop Shoot Cop at the Nile Theatre
Late 1990s
Michael Baden also remembers this show where “an over-exuberant fan produced a fire extinguisher and got up on stage and hosed the band during their second song and the venue completely filled with smoke … Everyone was forced outside to be able to breathe and a manhunt for said fan immediately ensued … Cops picked him up so the small crowd didn’t tear him apart.”

Billy Clone and the Same, Venue unknown
Date unknown
Why post a show with so little information? What choice do you have when someone wants to talk about “the guy at the Billy Clone and the Same show with the dead animal parts.” According to Michelle Elizabeth, “My friend went to shake his hand and he had a dead chicken foot in his hand. He later threw a cow leg and hit the same friend’s sister in the back of the head and split her head open. Yeah, it happened. I don’t recall the venue.”

Dead Cats at Big Fish Pub
Date unknown
Okay, this one’s not about animals, all right? Benjamin Fuqua was running sound at the Big Fish Pub and  “watched a band called the Dead Cats literally clear the club when it was at capacity.” Without fire extinguishers. Now, that’s something.

This article originally ran in 2017 and has been updated.
KEEP PHOENIX NEW TIMES FREE... Since we started Phoenix New Times, it has been defined as the free, independent voice of Phoenix, and we'd like to keep it that way. With local media under siege, it's more important than ever for us to rally support behind funding our local journalism. You can help by participating in our "I Support" program, allowing us to keep offering readers access to our incisive coverage of local news, food and culture with no paywalls.
Make a one-time donation today for as little as $1.
Serene Dominic
Contact: Serene Dominic