DJ Stoneypie Jim Louvau
If you’ve had your fill of family and need to get out of the house (and away from kith and kin) for a few hours during the holiday weekend, consider hitting up one of the following “can’t miss” concerts.

It includes a two-night stint by Say Anything (who will be celebrating the 10th anniversary of their 2007 album, In Defense of the Genre) and the Meat Puppets annual Thanksgiving show, as well as gigs by Kishi Bashi, Molotov, DJ Swamp, and Steel Panther.

If you need even more options, be sure to check out our extensive live music listings. In the meantime, here are the 10 best concerts to check out this weekend in Phoenix. 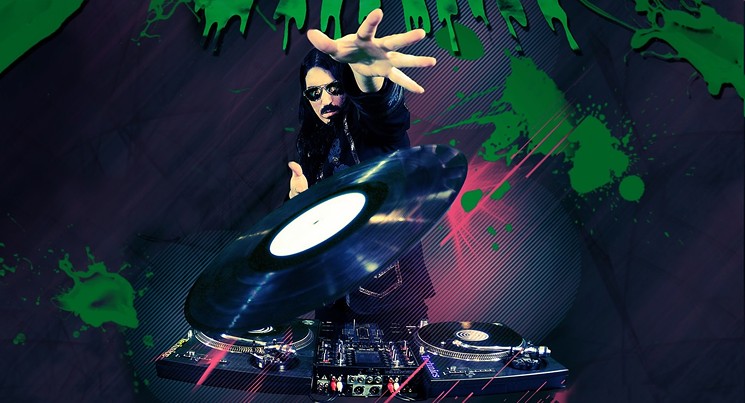 If you’re just shy of 40, Meat Puppets have been making music longer than you’ve been alive. The Phoenix-based band started back in 1980 by brothers Curt and Cris Kirkwood — guitar/vocals and bass/vocals, respectively — and drummer Derrick Bostrom, who hasn’t been a member since the band went on their first hiatus in 1996.

But this past summer, Bostrom hooked up with the Kirkwoods to perform at the band’s 2017 induction into the Arizona Music & Entertainment Hall of Fame. Their signature blend of punk rock has always exemplified the ethic of the genre more than the in-your-face sound it’s equated with.
Moving away from the hardcore sound early on, the band started incorporating country and psychedelia into their rock and roll and created a unique style that made them a longtime underground favorite and inspiration to tons of bands. Nirvana and Dinosaur Jr. are a couple of acts that have cited Meat Puppets as influences, especially their first couple rof ecords. They got a good chunk of radio play in ’94 with the single “Backwater," and continued adding members to their diehard fan base. Fifteen albums under their collective belt, see the well-seasoned Kirkwood brothers and current drummer Shandon Sahm tear it up in downtown Phoenix. Amy Young

Los Angeles band No Parents live up to that name through their songs. The band’s music sounds like the result of a volatile collision at the crossroads of hardcore punk and hooky garage rock — and even more like a group of feral teens who were left alone in a room with a lot of sugary candy and a stack of Jay Reatard records.

No Parents seemingly do not give a fuck about anything other than shredding through songs like “History,” which they performed in May on NBC’s Last Call with Carson Daly. During that two-minute spot, the band gave the late-night TV-watching world a taste of what their live performances are like: a mischievous mix of chaos-laden rock and roll delivered with energy and determination.

The band’s full-length release, hits you in the face right off the bat, with its fast and ferocious first track, “You Got Snaked.” That song takes little breaks from the driving guitar and pounding drums to lock you into some quick-but-catchy grooves. Local bands Nanami Ozone, Dadadoh and the POC, and Sonoran Chorus will help keep No Parents’ Lunchbox show a night of rowdy rock. Amy Young

Two years ago, local restaurateur Scott Price launched Shady Park, a combination bar, pizzeria, and cocktail lounge near Arizona State University in Tempe. is its best feature, the expansive open-air "bar park" that was inspired by out-of-the-way bars and taverns Price encountered in Europe that were cloistered amid forests.

Ringed with trees and featuring a recessed seating area, the bar park also offers a weatherproof sound system and a stage. And over the past few years, it’s hosted a helluva lot of shows, including gigs by local bands, touring artists, and DJs almost every weekend. We’d even go so far as to say it carries on the legacy of the old Sail Inn, the now-defunct spot that featured shows on a large outdoor stage.

This weekend, Shady Park celebrates its two-year anniversary with a party on Friday, November 24, featuring DJ/producer Muzzy in the mix. The event begins at 7 p.m. and admission is $10-$15. Benjamin Leatherman

In 2012, Sorxe was founded by staple members of the local metal scene on the premise that the creation of music and energy comes from within. And, of course, they wanted to shatter the preconceptions of experimental metal.

As a band with two bass players, they certainly the ante. Listeners can expect a buffet of technical songs to choose from, whether it’s a fast-paced headbanger or a drawn-out jam that explores different genres in sections with haunting interludes.

The band stretched the boundaries with their last album, which included a four-panel CD with original artwork — always thinking about the creative side of things — and their newly released six-song EP, Matter & Void, is more experimental and psychedelic than ever before. This weekend, Sorxe celebrates its release at The Rebel Lounge with support from Sympathizer and Dueño. Lauren Wise

Friday nights in Phoenix are a dance wonderland as nightclubs and other venues across the Valley come to life with booming beats, bright lights, and moving bodies. That includes the lounge at the Crescent Ballroom, 308 North Second Avenue, which becomes a dance destination whenever DJ Stoneypie’s event Friday Night Funk takes place.

The semi-regular dance party features Stoneypie, a.k.a. Tara Lopez, spinning a variety of sounds inside Crescent’s lounge, including soul, disco, boogie, breaks, ‘90s tracks, garage house, and future funk. Best of all, there’s no cover, which should leave you plenty of cash for drinks and whatnot. The latest edition of Friday Night Funk takes place on Friday, November 24, and starts at 11:30 p.m. Benjamin Leatherman