The 5 Best Concerts in Phoenix This Week 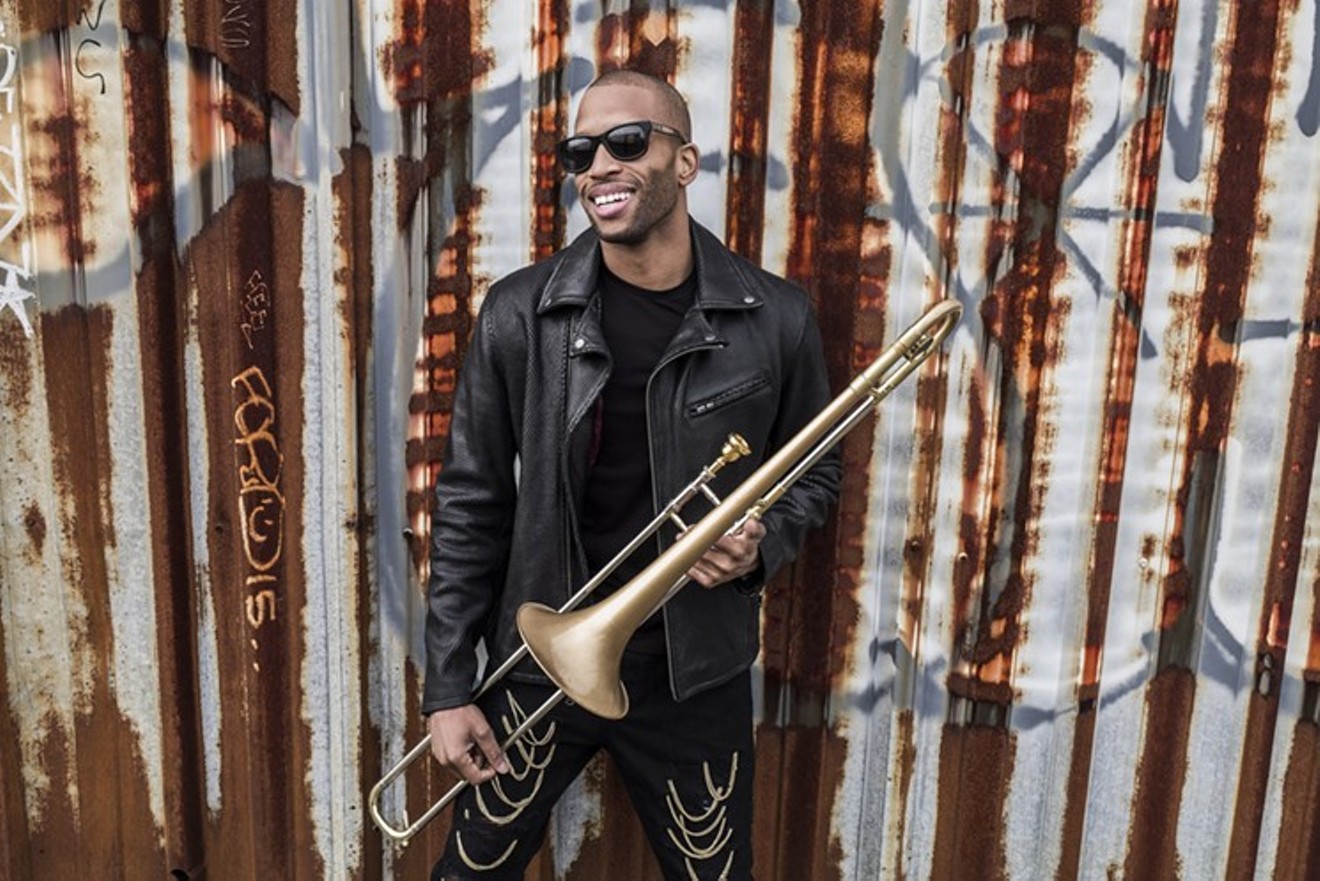 Troy Andrews (a.k.a. Trombone Shorty) Mathieu Bitton
Yes, Virginia, there will be live music on Christmas. A smattering of DJ events and shows will be taking place around Phoenix the night of the holiday, offering the chance to party and drink with someone other than your weird uncle.

There will also be live music events happening in the days following Christmas as well.

Even though the holiday hangover will cause a bit of a slowdown in the concert scene, performances by Trombone Shorty, Jane’s Addiction, Dom Flemons, and local bluesman Carvin Jones will take place.

Full details of all these events can be found below in our rundown of the best concerts and music events in Phoenix this week. And for even more gigs happening around town, check out our live music listings.

Terminal 11 (center) will be at the PV on Christmas night. No word on if he's bringing his kitty.
Terminal 11's Facebook
TechMas
Monday, December 25
Palo Verde Lounge in Tempe

Wind down the festivities of the day with a nap – and then get ready to get wound up all over again at TechMas. Hosted by the Society for Musical Esotericism, the event will include a jam-packed schedule of sonic entertainment from a combination of live electronic music acts and DJs.

The Tempe dive that’s as known for its shows as it is for its cheap drinks gets lit with knob-twisting and button-pushing from local acts including Terminal 11 and Carlos Sandoval. Issa, Beast Infection, and JSA are a few of the DJs.

Beats begin at 8 p.m. on Monday night at the Palo Verde Lounge in Tempe. Admission to the 21-and-over event is free. See details the Facebook event page. Amy Young Though he’s lived in Brooklyn and started the Carolina Chocolate Drops with Rhiannon Giddens in North Carolina, musician Dom Flemons grew up in Phoenix, where he learned the basics of folk music and collected records.

"I was exposed to [bluegrass] through the local folk community that was around Encanto Park at the time," he says, adding that trips to the Glendale Folk Festival, Prescott Folk Festival, and Flagstaff Folk Festival shaped his perception of folk music. "I got to go and meet with a lot of the people that were around there and that's where I learned about folk music and bluegrass, on top of the record-collecting I do."

Flemons picked up records at spots around Phoenix, citing Tracks in Wax, the old Zia Records on Indian School, and Revolver Records as favorite spots to stock up on platters.

And while he no longer is a member of Carolina Chocolate Drops, having left the band in 2013 to pursue a solo career, the Grammy-winning multi-instrumentalist (who plays the banjo, guitar, harmonica, fife, bones, bass drum, snare drum, and quills) hasn’t been idle the past four years.

Flemons has released four albums (including the critically lauded The American Songster) that encompass a variety of early American styles and genres, ranging from early jazz and blues to old-timey country and folk, all of which he incorporates seamlessly.

This week, Flemons will return to the Valley for a much-anticipated performance that will fittingly take place at the Musical Instrument Museum. Jason P. Woodbury

Jane’s Addiction started at the midpoint of the 1980s, playing a blend of metal, punk, and glam, and blew up in just a couple of years’ time. They released a self-titled album in 1987 that got them noticed by major labels, including Warner Bros., who got them under contract.

Their underground buzz was huge at that point, but when the record Nothing’s Shocking came out in 1988, that release generated a giant fan base. Jane's particular fusion of genres resonated with a variety of music fans, particularly as a crossover band for die-hard members of the punk and metal scenes. The ballad “Jane Says” was the huge hit from that record, going up to number six on Billboard’s U.S. chart.

In 1990, they released Ritual de lo Habitual, which had a couple of popular singles, “Been Caught Stealing” and “Stop!" The band split up in 1991 due to between members, some of which had to do with substance abuse problems. But they came back together in 1997 and have been sporadically productive since.

They'll make a stop at the Marquee Theatre on Wednesday, December 27, as part of a recently announced tour, the band's first since 2012. This time, there’s no anniversary to celebrate or a new release to promote; they’ll just be performing a variety of songs spanning the course of their career since 1985. Amy Young 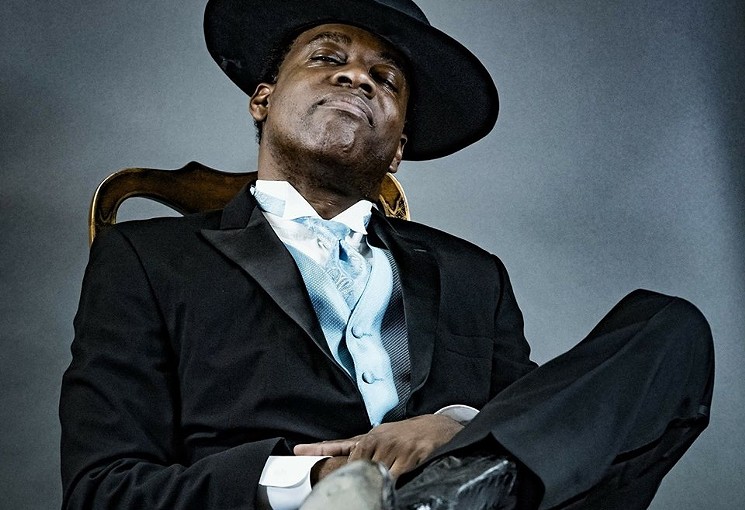 If you're a Valley resident who hasn't heard of guitarist Carvin Jones, it's likely that you've been doing a little carvin' of your own, holed up in some cavernous hermitage. Since 1989, Carvin has been sauntering his way across the universe with Phoenix as his launchpad, and his six-string the chauffeur.

Though he plays the blues, the Texas native has little to be blue about, having logged 6,000-plus performances, including opening for the likes of B.B. King and Santana. A mainstay on the international festival circuit, Carvin's Hendrix- stage charisma coupled with his SRV-flavored chops have garnered him success on the majority of earth's inhabitable continents. He’s even gotten kudos from Guitar Magazine and even Eric Clapton.

Fortunately for Valley cave dwellers, there are typically many opportunities to watch Jones do his thing on the six-string, including this week at the Rhythm Room. On December 27, he’ll celebrate the release of What A Good Day, his new 11-song album, along with his backing band during an intimate gig at the Central Phoenix venue. Rob Kroehler

Troy Andrews, also known as Trombone Shorty, was born into a musical family and has lived a musical life.

He started playing trombone at 4 years old, knows his way around funk and jazz, and has been working as a professional musician since he was a teenager. While Andrews been immersed in music for most of the 31 years he’s been alive, it’s during breaks from listening to music that his brain starts to work and creativity hits.

“I’m not really influenced by anything at that moment,” he says. “It’s like having a blank canvas, and sometimes I might be driving down the street, and some people next to me might be having some hip-hop music on, but I can’t really understand what song it is, but I hear certain rhythms and my interpretations of those rhythms ... that triggers another whole idea in my head that I just start to hum in my phone and do different things.”

A similar thing happened when Andrews was in the studio with his nephew, who was listening to trap music on his headphones. Andrews, who could only hear patterns of the drums, ran down to a drum set, played what he’d heard, and the song became “Familiar,” which ended up on his new album, Parking Lot Symphony, released on Blue Note last April.