Incubus is scheduled to perform on Saturday, August 12, at Ak-Chin Pavilion. Jim Louvau
What’s on tap for the Valley’s concert scene this weekend? Plenty, if you happen to dig rock ‘n’ roll legends.

Dennis DeYoung of Styx will be at Mesa Arts Center on Friday, and drummer Dave Lombardo of Slayer fame is bringing his latest project, Dead Cross, to the Marquee in Tempe on Saturday. Meanwhile, renowned axeman Paul Gurvitz takes over Pranksters Too in Scottsdale, and both Incubus and hometown heroes Jimmy Eat World play Ak-Chin Pavilion over on the west side that same night.

Other notable gigs this weekend include Straight No Chaser and Scott Bradlee's Postmodern Jukebox at Comerica Theatre, Kaytranada at The Pressroom with The Gaslamp Killer and Sango, and the return of the locally focused Warped Your Fest. Hip-hop artists both burgeoning (Bryson Tiller) and old-school (Artifacts) also have big gigs.

Details about all of these shows can be found in the following rundown of the best concerts in Phoenix this weekend. (And be sure to hit up our online music listings for even more events around town.)

The teachers-turned-punkers of No Small Children.
Courtesy of No Small Children
No Small Children
Friday, August 11
ThirdSpace
For years, Nicola Berlinsky had been a fan of her colleague Lisa Pimentel’s music. A musician in her own right, Berlinsky (who also worked as a teacher in the L.A. area) had seen her friend perform , which inspired her to dust off her drum kit. In 2012, the duo decided to join forces creatively. The duo decided to call the project No Small Children, an ode to the fact they didn’t have young kids of their own. They also decided on a sound. “We wanted to be a punk band,” says Pimentel, formerly the drummer of Boston-based, all-female punk outfit Heidi. “Then we just kind of went from there.” Five years since forming, No Small Children – which includes Pimentel’s sister Joanie, also a teacher, on vocals and bass – have released three albums on top of continuing to teach at the private school. They gig consistently, even during the school year, and they manage their time tightly in order to squeeze in recording sessions. In 2016, No Small Children scored its biggest success yet when the trio’s punk cover of “Ghostbusters” by Ray Parker Jr. played over the end credits of last year’s all-female revival of the blockbuster film franchise. And this year, they released their fifth album, Radio, and are in the midst of a summertime tour. Since No Small Children doesn’t have worry about their next paycheck, the trio’s vibe allows them to soldier on making music as a “fun little project.” Daniel Kohn

Bryson Tiller, rap star on the rise.
Rolexx
Bryson Tiller
Friday, August 11
Rawhide Event Center in Chandler
Bryson Tiller's debut album, T R A P S O U L, sounds like it was written by an established artist in his prime. The Kentucky R&B artist's rise came seemingly out of nowhere. At it might seem like Tiller is piggybacking on the surge in melody-driven rap in recent years (see: Fetty Wap and Travis Scott). But Tiller's vocal talent doesn't ever seem like an afterthought, and his melodies are infectious and catchy. His lyrics are in a fashion similar to Drake, but he maintains an undercurrent of regret and second-guessing as he sings about lavish lifestyles and the one who got away. H.E.R. and Metro Boomin will open the show at Tiller’s August 11 concert at Rawhide in Chandler. Matt Wood

Scott Bradlee and his Postmodern Jukebox have teamed up with Straight No Chaser.
Braverijah Gregg
Straight No Chaser & Scott Bradlee's Postmodern Jukebox
Friday, August 11
Comerica Theatre
Both acts sharing this double bill have unique musical stylings, yet they also share much in common. Both gained a following for their fresh interpretations and covers of popular music, and both have found most of their success due to online followers from social media. So it only made sense for the two to join forces for a musical tour-de-force, right? Straight No Chaser's Charlie Mechling agrees when talking about Postmodern Jukebox and their joint tour. "It’s kind of a similar thing to what we do. It’s a great night, a ton of great music and a ton of fun. It’s a great party show," he says. Mechling wouldn't reveal the set list, but he did at least give a few clues as to what audiences can expect to hear. "We’ve got some songs that have become classics for us that will be in the show. One of those is 'I’m Yours/Over The Rainbow,' but we’ve added another song into it," he says. "We’re bringing back some classics that people have asked us when we’re going to do again. It’s a mix of old and new." Mechling also spills the beans, slightly, on a few of the Postmodern Jukebox songs, saying the group has a great version of Radiohead's "Creep" and Sia's "Chandelier" among its vast repertoire of hits. What else will be on tap when Straight No Chaser and Scott Bradlee's Postmodern Jukebox visit Comerica Theatre this weekend? Guess you’ll have to show up and find out. Sam Byrd 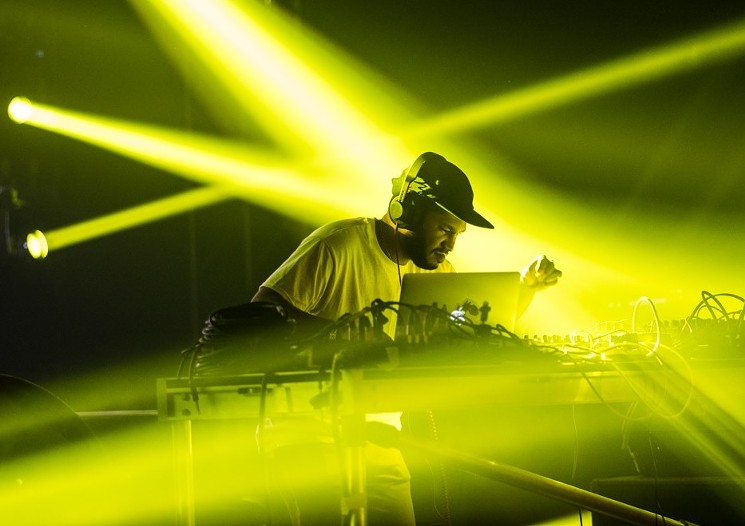 Kaytranada performs at Art Basel in Miami in 2015.
Karli Evans
Kaytranada
Friday, August 11
The Pressroom
There aren't too many musicians left like Kaytranada, not in the big leagues, anyway. His sound is hard to classify as anything more than head-knockin', and the Montreal-born DJ/producer loves to break the rules. He makes headlines for his noiseless drops, like his 2014 Whatever mixtape project, which he just dumped a file of 19 tracks onto the internet with hardly a word. "Free music rules the world," he stated at the time. "You don't get a lot of checks from albums anyway, only if you're a pop star. If you're an indie artist, I think you should still drop music for free and then get your money from the shows and other shit you're doing." But even his roots-first style of hip-hop and electronic dance music can't be free all the time, which is why you’ll have to pay to see him perform at The Pressroom on Friday night along with fellow DJ/producers The Gaslamp Killer and Sango. Kat Bein

Dennis DeYoung (center) with August Zadra (left) and Jimmy Leahey (right).
Courtesy of Mesa Arts Center
Dennis DeYoung: The Music of Styx
Friday, August 11
Mesa Arts Center
To many classic-rock fans, it would seem a bit of unnecessary clarification to bill a Dennis DeYoung show as "Dennis DeYoung: The Music of Styx." After all, since DeYoung is the band's main vocalist, chief songwriter, and keyboardist, anyone with a ticket to the show surely knows they will hear the headliner belt out classics like "Lady," "The Grand Illusion," "Babe," "The Best of Times," "Come Sail Away," and – yes – "Mr. Roboto" in that utterly distinctive voice. From the time in 1972 when Styx began (though he had been playing with some members in other-named bands since 1961), DeYoung was the group's strongest creative force in a lineup that also included vocalist/guitarist Tommy Shaw, guitarist James "JY" Young, and the rhythm section of brothers Chuck and John Panozzo on bass and drums. And he was happy with that. Because the band dipped their musical toes in pools of straight-ahead rock, ballads, and prog during their '70s and '80s heyday, there seemed to be a Styx song to fit any mood. And it's that versatility that DeYoung feels boosted the band's career. Despite all that success, though, DeYoung himself felt that his name alone doesn't have enough familiarity; thus the extra wording he is allowed to use when after some messy legal wrangling upon his unceremonious 1999 ouster from the band. After all, it's his legacy, too. Bob Ruggiero

Warped Your Fest: The Sequel
Friday, August 11, and Saturday, August 12
Trunk Space
When you’re running a record label, a festival’s a great way to get some exposure for the bands whose tunes you’re trying to turn people on to. That formula is nothing new, especially these days when festival culture is an intrinsic part of the musical landscape. The key is to make it so awesome that fans will come back the following year to soak up more of the music that moves them. Local label Warped Your Records managed to make that happen. It’s hosting Warped Your Fest: The Sequel on Friday, August 11, and Saturday, August 12, at downtown’s all-ages DIY venue, Trunk Space. The festival shines a spotlight on a bunch of Phoenix’s indie bands, as well as some visitors from Flagstaff and Tucson, keeping it an affair. You can spend $8 per day to attend, and $14 gets you a two-day wristband.

A mix of bands is featured on the bill. The label has worked with some of them, and others are acts the organizers admire. Sets will happen on two stages, simultaneously, throughout the course of the festival, in Trunk Space’s main room and basement space. A couple of clothing vendor pals will set up shop both days. Colin Bauer heads up Warped Your Records, and Aaron Ponzo serves as the label’s intern. The two are looking forward to bringing the event back again. Mostly because, as Ponzo says, “They are all our friends and we really like them.” Red Tank!, Childhood Asthma, and Logan Green are on the bill. Diners, Closet Goth, The Harrison Band, and Amateur Hour are, too. (Those bands have released tapes through Warped.) Others in the lineup have been included on some of the label’s cassette compilations. Amy Young

Read on for even more big concerts this weekend, including a double bill featuring Incubus and Jimmy Eat World, as well as gigs by Dead Cross, Artifacts, and J Boog.