All Time Low is scheduled to perform on Sunday, August 8, at The Van Buren. Nolan Knight
Metro Phoenix’s concert lineup this weekend includes a mix of legendary rock bands like King Crimson, electronic dance music superstars, and burgeoning local hip-hop artists. You also have the chance to dance to indie anthems at Tempe’s Marquee Theatre or party poolside with Duck Sauce’s A-Trak.

Details about each of these music events happening from Friday, August 6, to Sunday, August 8, can be found below. And for even more live music happening around the Valley, hit up Phoenix New Times' online concert calendar.

It's one thing to write country songs, and another thing to live them. So while hardship has helped Gary Allan step his game up another level, the price was staggering. Allan grew up in honky-tonks, accompanying his dad's band before striking out with a Bakersfield sound and gruff, weathered tenor. His big break came when a wealthy couple to whom he sold a car found his demo in the glove box and promptly wrote him a check to pursue his dream.

From the beginning, Allan walked the line between Nashville pop pretension and a rougher-hewn allegiance to Merle Haggard and George Jones. By his platinum-selling third album, Smoke Rings in the Dark, he'd found a balance between the two and began to carve out a career, scoring three No. 1 singles over his subsequent two albums. Then, in 2003, Allan's wife died by suicide. His next album, Tough All Over, featured four original songs including the self-aware "Putting My Misery on Display." He’s doing better these days and is touring behind his recently released 10th studio album, Ruthless. Catch Allan in concert at Harrah's Ak-Chin Casino, 15406 North Maricopa Road in Maricopa, at 8 p.m. on Friday, August 6. Tickets are $49 to $59. Chris Parker

The name Delta Heavy might conjure images of a Mississippi bluesman bellowing hardship over an old acoustic guitar. In this case, though, it’s two London blokes with a penchant for deep, booming bass. But they’ve still got plenty of soul. Big-room theatrics mix with London’s grimy underbelly for some of the nastiest bangers to blast from a synthesizer. Their show on Friday, August 6, at Sunbar, 24 West Fifth Street in Tempe, promises a burning-hot mix of all manner of flavors and vibes. Delta Heavy isn’t afraid to turn the tempo up or down, as long as the common denominator is mean-mugging, bone-crunching drops. This is dance music for the apocalypse, so come with your game face on and be ready to get blown away. The beats start blasting at 9 p.m. Justin Hawkes will also perform. Tickets are $19. Kat Bein

King Crimson in all their suited glory.
Dean Stockings

Progressive rock legends King Crimson make a stop in the Valley on Saturday, August 7, to play Scottsdale’s Talking Stick Resort, 9800 East Talking Stick Way. The band founded in London in 1968 has spent over five decades building a rabid cult following for their foundational contribution to the genre of hard rock. Though guitarist Robert Fripp stands as the only remaining member of the original band, King Crimson's following remains solid. There are still tickets available for your chance to catch this legendary band live. The California Guitar Trio, who Fripp mentored and toured with during their time in the League of Crafty Guitarists, will open the 7 p.m. concert. Admission is $35 to $39. David Fletcher

If you were to assemble a list of the most danceable indie songs of all time, there’s a good chance tracks like the M83’s “Midnight City,” Tame Impala’s “Elephant,” and the MGMT banger “Kids” would be included, owing to their infectious beats and high-energy vibes. It’s the same reason you’ll hear these same anthems coming from the sound system inside the Marquee Theatre, 730 North Mill Avenue, on Saturday, August 7, during the Electric Feels: Indie Rock + Indie Dance Party. The touring 18-and-over event features a mix of DJs and live elements playing a soundtrack of indie hits as a crowd of dancers moves to the beats underneath an array of multicolored clouds. Doors open at 9 p.m. and admission is $15. Benjamin Leatherman 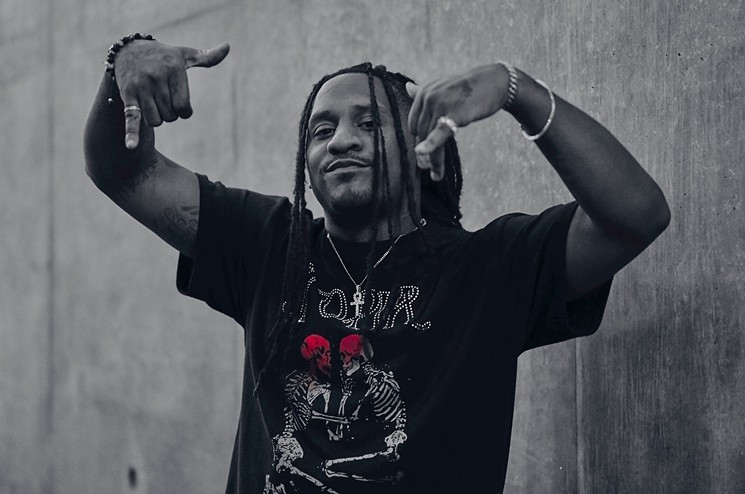 Local hip-hop stars Richie Evans, Vee Tha Rula, and Rum Nitty will headline the Southwest Sound Fest on Saturday, August 7, at Endgame, 1233 South Alma School Road in Mesa. The event is being put on by The Beatlocker, the local-oriented hip-hop show that airs every Sunday evening on FM radio station Power 98.3. Other Valley artists scheduled to take the mic include Dann G, Marquel Deljuan, Dayline Neohop, Qiayz, Dela Preme, Delly Everyday, Nov the Zoner, Joseph Bills, Murkemz, and Coe Yante. Local DJs Marvel and DJ John Blaze will also be in the mix. The show starts at 5 p.m. and admission is $30. Benjamin Leatherman

Lane 8 at The Van Buren

Daniel Goldstein, who records and tours as deep/progressive house music artist Lane 8, admires the live shows and DJ sets of yore, namely, when the concert experience was devoid of voluntary distractions. Mobile devices, as we've now figured out, can isolate concertgoers and destroy the communal vibe performers try so hard to establish.


Goldstein has worked to fight the always-online tide in recent years through his event series This Never Happened. The premise is simple: Leave the phone alone. In Goldstein's mind, because live experiences should be spontaneous social gatherings where attendees can fully experience the music and forge meaningful friendships with one another, mobile devices are best left in pockets or, better yet, at home.
During Goldstein’s show at The Van Buren, 401 West Van Buren Street, on Saturday, August 7, in support of his third studio album, 20202’s Brightest Lights, the ethos behind This Never Happened will still be in play. The gig, which gets going at 9 p.m., will once again strive to be a social media–free affair. As novel as his online-averse approach might seem in 2020, Goldstein doesn't see his terms of engagement with his audience as a gimmick. On the contrary, it's quite sincere. See for yourself on Saturday night. The show, which features an opening set by EDM artist Le Youth, is sold out, but you can find tickets through resellers. Grant Albert

The members of All Time Low.
Jimmy Fontaine

All Time Low at The Van Buren

All Time Low was one of the few bands to emerge triumphant from the MySpace scene of the early 2000s. The Baltimore quartet made a name for itself in the wake of Fall Out Boy’s takeover of mainstream radio, pushing its happy sing-along rock with hits like “Dear Maria, Count Me In” and “I Feel Like Dancin’.” Lead singer Alex Gaskarth’s whimsical singing style suits the band’s major-key riffing well.

Over its 18-year lifespan, All Time Low has managed to build and sustain a devoted following, which has helped the act tour across the world over the past two decades. The band is touring in support of Wake Up, Sunshine, their eighth studio album and second released on label Fueled by Ramen, and will play The Van Buren, 401 West Van Buren Street, on Sunday, August 8. Grayscale and Sydney Sprague will open. The 8 p.m. show is technically sold out but you can buy tickets on the secondary market. Bree Davies

From earning the title of DMC world champion in 1997 at the age of 15 to serving as Kanye West's personal DJ when the Chicago rapper broke into the mainstream to his titles of producer and record label co-owner, it seems that the only natural next step for A-Trak is total world domination. Okay, maybe not. But it's a known fact that the Montreal-bred, New York-based DJ/producer has slashed his way into the EDM scene over the last decade and a half, leaving a solid mark.


When he's not touring or remixing, A-Trak can be found dabbling around in side-projects galore – take Duck Sauce, for instance, the duo he formed with DJ/producer Arman Van Helden (best known for their 2010 track “Barbara Streisand”), or Fool's Gold, the influential label he co-founded in 2007. A-Trak will be stopping by Maya Dayclub, 7333 East Indian Plaza in Scottsdale, on Sunday, August 8, to headline this weekend’s Sunday Drip pool party. Gates open at noon and general admission is $20. Catherine Downes
KEEP PHOENIX NEW TIMES FREE... Since we started Phoenix New Times, it has been defined as the free, independent voice of Phoenix, and we'd like to keep it that way. With local media under siege, it's more important than ever for us to rally support behind funding our local journalism. You can help by participating in our "I Support" program, allowing us to keep offering readers access to our incisive coverage of local news, food and culture with no paywalls.
Make a one-time donation today for as little as $1.