Arin Ray is scheduled to perform on Sunday, December 18, at Crescent Ballroom. ro.lexx
What’s on tap for the Valley’s concert scene this weekend? A mix of holiday shows and punk legends, to put it simply. When it comes to the former, there are concerts featuring mariachi ensembles and local metal bands. In the case of the latter, iconic acts like Fear and Madball will be getting people moshing inside Mesa’s Nile Theater on Friday night.

More details can be found below. Be sure to check out Phoenix New Times’ live music listings for even more shows happening around the Valley from Friday, December 16, to Sunday, December 18.

Friday, December 16
Nile Theater, 105 West Main Street, Mesa
If Saturday Night Live had a Hall of Infamy for their musical guests, L.A. punk icons Fear would be a shoo-in as the inductees alongside the likes of Elvis Costello and Sinéad O'Connor. The band’s riotous performance on the program’s 1981 Halloween episode that made them legends. Invited onto the show by John Belushi, Fear blasted through a handful of songs while slam dancers devastated the set and inflicted $20,000 in damage. It's arguably the punkest thing to ever happen on the show to this day. Fronted by the garrulous and imposing Lee Ving, L.A. punk icons Fear are the musical equivalent of junkyard dogs snapping on chains. Fear classics like “Let’s Have a War” bridge the gap between the Sex Pistols and Motorhead, full of bile and macho fury. The band’s fearsome live energy and stage presence made them poster boys for the American punk rock scene, which is why they turn up in such genre documentaries as The Decline of the Western Civilization. Their first two albums with Slash Records remain a highwater mark for this style of caveman punk. Few bands provide a more fitting soundtrack for a bad night out than Fear. With Rotten Youth, 80*D, and Unstable Youth; 7 p.m., $35 via simpletix.com. Ashley Naftule

Friday, December 16
The Underground, 105 West Main Street, Mesa
NYC hardcore stalwarts Madball may have cycled through dozens of members over the years, but they’re basically a hardcore institution at this point. Formed in 1988, Madball originated as a side project of hardcore legends Agnostic Front. Frontman Freddy Cricien (half-brother of AF’s Roger Miret) used to grab the mic and perform vocals during Agnostic Front shows. After a few times of playing guest singer for his brother’s outfit, Cricien caught the musician bug and started his own group. “No bullshit” is the M.O. for Madball. It’s straight-ahead hardcore: shouting, larynx-shredding vocals; pummeling rhythms; and guitars that sound like they’re rigged to explode if they ever play more than four chords in one song. On albums like Hold It Down and Empire, Madball displays a knack for writing killer sing-along songs. Like the best hardcore music it invites your participation, and demands that you raise your voice to drown out Cricien, seizing the mic just like he did back in the Agnostic Front days. 7:30 p.m., $23 via ticketmaster.com. Ashley Naftule


Have Yourself A Heavy Metal Christmas

Saturday, December 17
Time Out Lounge, 3129 South Mill Avenue, Tempe
Heshers can get into the holiday season, too, without losing their metalhead cred. For proof, check out this hellacious holiday show inside Tempe’s Time Out Lounge on Saturday evening. A lineup of Valley hard rock and metal bands — including Gordon Circle, Dawn of the Rising, Critical Miss, and Luminatus, and I Don't Konform — will shred the halls while performing covers of Christmas carols and various yuletide songs. The musicians of local act Ankh-Alien, including guitarist Bryon Mogul, will perform “yuletide sinister grooves” when it pays tribute to symphonic/prog-metal act Trans-Siberian Orchestra during their set. The show will also serve as a toy drive for Phoenix Childrens Hospital as attendees are encouraged to bring a new, unwrapped plaything to the gig. 6 p.m., free. Benjamin Leatherman

Saturday, December 17
Scottsdale Center for the Performing Arts, 7380 East Second Street, Scottsdale
Want to celebrate the season in cheery fashion? José Hernández and his legendary mariachi ensemble Sol de México are planning to bring their own Mexican pride and culture to the Valley during the holidays with a night of mariachi twists on holiday classics, mixed with some of the world-renowned group’s own music. Hernández — a fifth-generation mariachi musician who’s rubbed elbows with the likes of Luis Miguel, Bryan Adams, the Beach Boys, and the late Vincente Fernandez — formed the ensemble in the early ‘80s and they’ve performed in venues around the world. They’ve been visiting Scottsdale Center for the Performing Arts for several years now and will do so again this weekend. 8 p.m., $39-$59 via scottsdalearts.org. Joseph Perez

Saturday, December 17
Valley Bar, 130 North Central Avenue
The pandemic was devastating for most musical acts, but some groups were able to turn those bitter lockdown lemons into lemonade. Washington, D.C. quintet Sub-Radio took their frustration at not being able to tour and channeled that thwarted energy into doing a series of live streams on Reddit. The streams brought them a lot more fans, helping the band find its footing after years of trying to find their path. It’s easy to see why they grew such a big following: their bright, high-energy pop-rock is so infectious you’ll be tempted to slip on a mask while listening to it. Channeling the polished synth/emo sound of groups like Panic! At The Disco and The Killers, Sub-Radio sounds tight and polished on songs like “Disco.” Buoyed by Adam Bradley's helium-spiked vocals and Matt Prodanovich’s chicken-scratch guitar sound, Sub-Radio makes music that’s ready for the dance floor and the radio. Finally able to tour again, they’re ready to cut loose. Are you? With Olen; 7 p.m., $15/$18 via seetickets.us. Ashley Naftule 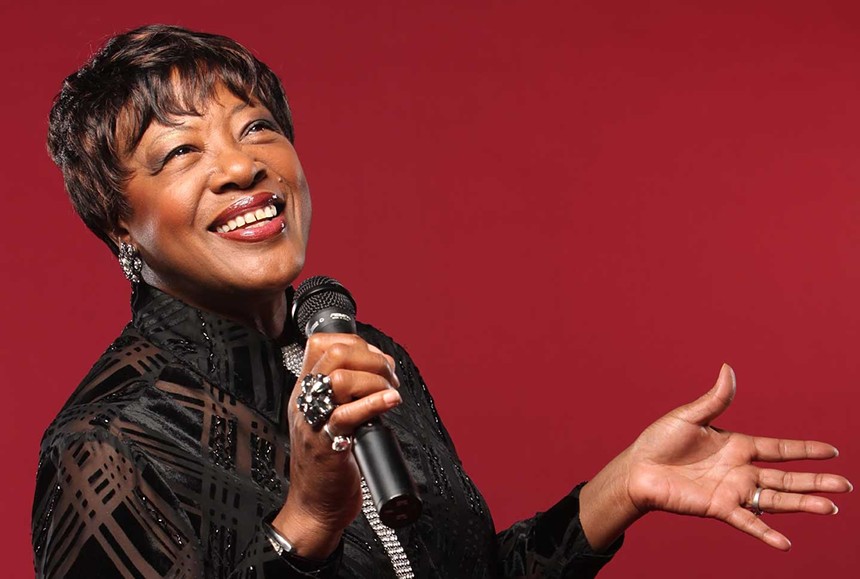 Sunday, December 18
The Nash, 110 East Roosevelt Street
Francine Reed is an absolute treasure. Born into a family of musicians, which included her late sister (and fellow vocalist) Margo, Reed has spent a good portion of her life performing, dating back to her time singing gospel music in church while growing up in Illinois. From the mid-’70s onward, she’s been lighting up local stages and venues with her brassy voice and lively personality. Back in the day, you could find her at such famed-but-bygone Phoenix-area spots as Boojum Tree, Chuy’s, or Bombay Bicycle Club. And when she wasn’t thrilling locals with her talents, Reed was sharing stages with the likes of Miles Davis, Etta James, and Smokey Robinson (she’s also a longtime member of Lyle Lovett’s Large Band). Reed is still performing on the regular at local venues and is scheduled to take the stage at downtown Phoenix jazz haven The Nash this weekend for a Sunday afternoon matinee. 3 p.m., $37-$45 via thenash.org. Benjamin Leatherman

Sunday, December 18
Crescent Ballroom, 308 North Second Avenue
It took R&B/soul singer Arin Ray a few tries to find success in the music world. After auditioning and performing on subsequent seasons of The X Factor in the early 2010s, he went on to write hit songs for the likes of Nicki Minaj, John Legend, Young Thug, and Jeremih. The experience helped shape his own music, as Ray eschewed the bouncy style of more poppy R&B in favor of a grimier version of the genre. Such tracks formed the bulk of Platinum Fire, his 2018 debut on Interscope, which included features from Ty Dolla $ign, DRAM, and YG. Ray is currently touring behind his latest album, Hello Poison, which includes such singles as “Gold” and “Bad Idea.” With Savannah Cristina; 8 p.m., $20-$35 via seetickets.us. Benjamin Leatherman
KEEP PHOENIX NEW TIMES FREE... Since we started Phoenix New Times, it has been defined as the free, independent voice of Phoenix, and we'd like to keep it that way. With local media under siege, it's more important than ever for us to rally support behind funding our local journalism. You can help by participating in our "I Support" program, allowing us to keep offering readers access to our incisive coverage of local news, food and culture with no paywalls.
Make a one-time donation today for as little as $1.