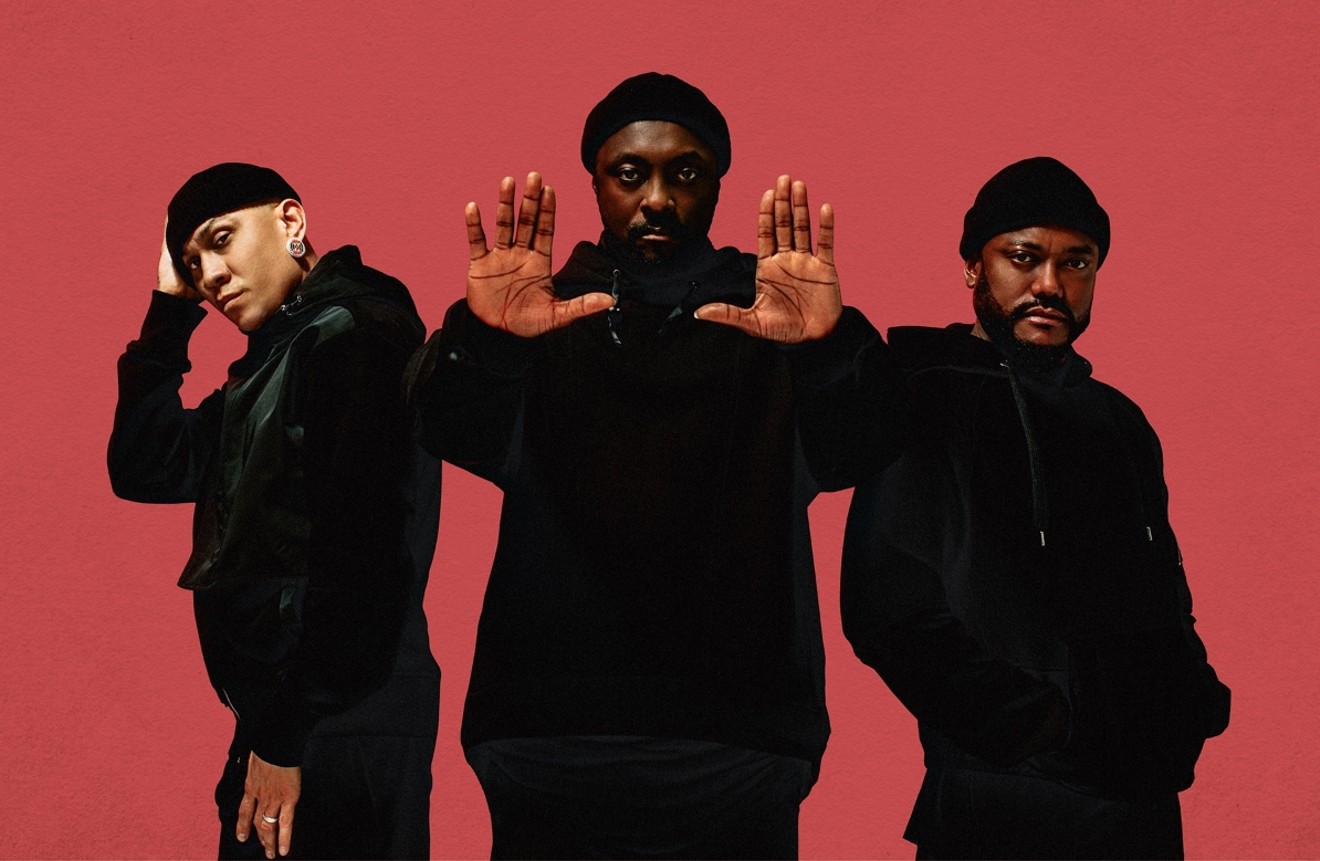 Black Eyed Peas are scheduled to perform on Monday, December 19, at Celebrity Theatre. Nabil Elderkin
This week, you can attend holiday concerts in honor of either Hanukkah or Christmas, as The Klezmatics (who will be celebrating the former) as well as the Phoenix Chorale and Lindsey Stirling (who are paying tribute to the latter) are set to perform at Valley music venues.

Read on for more details about all of these shows, or check out Phoenix New Times’ concert calendar for even more live music around town from Monday, December 19, to Thursday, December 22.

Monday, December 19
Celebrity Theatre, 440 North 32nd Street
Like the all-seeing eye of an ever-watching god, the Black Eyed Peas were inescapable in the early 2000s. Originally an alternative hip-hop group that tried a West Coast take on the kind of "conscious rap" style that acts like De La Soul and A Tribe Called Quest were perfecting back east, the Peas radically evolved their sound in the late ’90s, shifting into doing big, crowd-pleasing pop-rap. The live band backings were out; electropop influences and bright shiny production styles were in. By the time they released Elephunk in 2003, the Black Eyed Peas' reign of terror over the pop charts began in earnest. Over the next several years, the group (which features rapper will.i.am being their most vocally present and charismatic member) released the ubiquitous hits: "Rock That Body," "Imma Be,” "I Gotta Feeling," and "Where Is the Love?" With the addition of Fergie, the Peas became even more of a household name. But things have changed: Fergie left the group in 2018, and the Peas haven't landed a big hit since. Their newest album, Elevation, dropped in November; time will tell if any of its tracks can help recapture their old glory. With Nicky Youre; 8 p.m., $45-$125 via etix.com. Ashley Naftule

Monday, December 19
Musical Instrument Museum, 4725 East Mayo Boulevard
There's a world of influences mixed into the globe-trotting tunes of The Klezmatics: Afro-Caribbean and Balkan rhythms, Yiddish lyrics, Latin stomps, jazzy Dixieland riffs, punk politics, and (of course) traditional klezmer arrangements. Members of the NYC-based ensemble use a wealth of instruments, ranging from fiddles and accordions to nyckelharpas, gadulkas, and tamburitza. The result is energetic, lively, and heartfelt music described by one scribe as “clarinet-wailing, hyper-thumping soul music of the Jewish diaspora.” Another key influence for The Klezmatics has been the late Woody Guthrie. The folk legend’s artistry has been baked into the DNA of their sound and provided the lyrics for their 2006 album Woody Guthrie's Happy Joyous Hanukkah. As the story goes, lyrics for numerous unpublished songs inspired by the Jewish holiday he wrote in the ‘40s and ‘50 with his mother-in-law, Yiddish poet Aliza Greenblatt, were unearthed by his family and provided to The Klezmatics to record and perform. They’ve become a staple of the ensemble's annual holiday tour, which fittingly visits the Musical Instrument Museum every December. 7 p.m., $44.50-$49.50 via mim.org. Benjamin Leatherman

Monday, December 19
Brophy Chapel, 4701 North Central Avenue
Few Valley residents are familiar with the Phoenix Chorale and even fewer are aware that the esteemed local choral group has won Grammy Awards on three separate occasions for their glorious vocal talents, technical precision, and clarity. It's reason enough to catch a performance by the Phoenix Chorale when they occur every few months. On Monday evening, they’ll offer the final performance of this year’s holiday show, A Chorale Christmas: Navidad, which features seasonal Spanish and Latin music. Highlights include the Renaissance-era arrangements composed by Catholic priest Francisco Guerrero, folk songs from Argentina, and Ralph Vaughan Williams’ “Fantasia on Christmas Carols.” An audience singalong of beloved holiday songs is also planned, so better warm up your pipes if you plan to attend. 7:30 p.m., $23-$45 via ovationtix.com. Benjamin Leatherman

Tuesday, December 20
The Van Buren, 401 West Van Buren Street
Ukrainian band Jinjer has always carried the torch for their country’s fertile metal scene, which also birthed such acts as Drudkh, Nokturnal Mortum, and Tin Sontsia. Since the invasion of their homeland by Russian forces, though, Jinjer’s support has taken on extra significance. The four-member metalcore band fronted by vocal powerhouse Tatiana Shmailyuk has been raising funds for their war-torn country and spreading awareness of its plight through its touring over the past several months. (In June, they also posted a new video for the 2021 song “Call Me A Symbol,” which begins with a message urging fans to “[protest] and [scream] at the top of you lungs.”) The horrific conflict, which Jinjer witnessed firsthand, has also reportedly influenced their newest material, as bassist Eugene Abdukhanov has stated that they wrote songs while sheltering in Kyiv during Russia’s initial invasion. Their current tour, which is due at The Van Buren this week, features fellow Ukrainian metal group Space of Variations as openers. With P.O.D. and Malevolence; 7 p.m., $37-$129 via livenation.com. Benjamin Leatherman

Wednesday, December 21
Musical Instrument Museum, 4725 East Mayo Boulevard
From Boston to Tucson, Ryanhood’s Cameron Hood and Ryan Green have gone on a long and winding musical journey. Friends since high school, the duo started playing together in 2003, touring colleges across the country as they honed their unique sound. Ryanhood are a folk-rock band that plays an intimate, stripped-down sound. Driven primarily by acoustic instruments, they blend rock, pop, and folk together to create soulful ballads like “Always Love You” and “Embers.” Hood and Green’s chemistry is palpable; their interlocking vocal harmonies elevate their material, taking what could be humble acoustic guitar noodling and pushing it to the stratosphere. With more than six albums under their belt, Ryanhood continues pushing their sound (even incorporating electric instruments onto their records). Touring with acts like Kelly Clarkson and Jason Mraz has helped them build up a following, but in the end, it’s Ryanhood’s music and the duo’s winning stage presence (they have a reputation for clever banter) that keeps folks coming back to hear their lush music. 7 p.m., $23.50-$33.50 via mim.org. Ashley Naftule

Thursday, December 22
Mesa Arts Center, 1 East Main Street
We’ve all heard of guitar heroes, but former Valley resident Lindsey Stirling is that rarest of creatures: a violin hero. Like Hendrix with his ax or Bonham on the drums, Stirling is THE virtuoso on the strings and bow. It isn’t just her deft skill with her instrument that’s made her the closest thing any violin player’s come to being a household name: it’s her knack for choreography and performance. Stirling’s heart pumps theater kid blood; you can see that innate theatricality in her costumes, intensely choreographed performances, and music videos. She plays a wide range of styles: classical, pop, rock, and even dubstep. Her latest album, Snow Waltz, is her second foray into that most timeless of musical styles: Christmas music. No dashing through the snow for Stirling: she’s too busy sawing and bending strings, reimagining classic holiday standards like "Feliz Navidad" and "God Rest Ye Merry Gentlemen" with her signature style. It can be a little too much at times — restraint isn’t Stirling’s strong suit — but the holidays are a time for big feelings and Snow Waltz has plenty of room to fit all your Christmas cheer. 7:30 p.m., tickets are available on the secondary market. Ashley Naftule
KEEP PHOENIX NEW TIMES FREE... Since we started Phoenix New Times, it has been defined as the free, independent voice of Phoenix, and we'd like to keep it that way. With local media under siege, it's more important than ever for us to rally support behind funding our local journalism. You can help by participating in our "I Support" program, allowing us to keep offering readers access to our incisive coverage of local news, food and culture with no paywalls.
Make a one-time donation today for as little as $1.