Xixa is scheduled to perform on Friday, December 30, at The Rebel Lounge. Julius Schlosburg
Whatchu got planned for New Year’s Eve weekend? There are parties and event both large and small happening, but if you’d prefer to spend the final hours of 2022 soaking up the sounds of live music, bands such as Xixa, Spafford, and Roger Clyne and the Peacemakers all have shows scheduled in the Valley during the three-night stretch from Friday, December 30, to Sunday, January 1.

If DJs and EDM are more your speed, electronica artist The Polish Ambassador will bring his beats to Walter Where?House while the annual Decadence Arizona festival rages over in Avondale.

More information about all these gigs can be found below. You can also check out Phoenix New Times’ concert listings for even more music events around the Valley this weekend.

Friday, December 30
The Rebel Lounge, 2303 East Indian School Road
Rising out of the dust of Tucson, Xixa play a spooky blend of Latin music and bluesy goth rock. Formed by Gabriel Sullivan and Brian Lopez, both of whom were players at one point in Tucson’s legendary Giant Sand, Xixa took their love of psychedelia and moody blues to new heights. One of Xixa’s foundational influences is Chicha, a style of psychedelic cumbia music from Peru (the group’s original name was Chicha Dust). On 2021’s Genesis, Xixa developed a more full-bodied version of their sound. On songs like the Poe-indebted “Nights Plutonian Shore” and "Genesis of Gaea,” Sullivan’s gravelly voice anchors a raucous soundscape of hand percussion, pounding pianos, and spaghetti Western guitar flourishes. And while Xixa’s original songs continue to impress, the band hasn’t lost their love of covering cumbia songs and infusing them with their particular blend of dramatic, gothy energy. So put on your darkest lipstick and break out your dancing shoes when you come out to bask in their dark majesty when Xixa plays The Rebel Lounge. With Salvador Duran; 8 p.m., $20/$25 via seetickets.us. Ashley Naftule 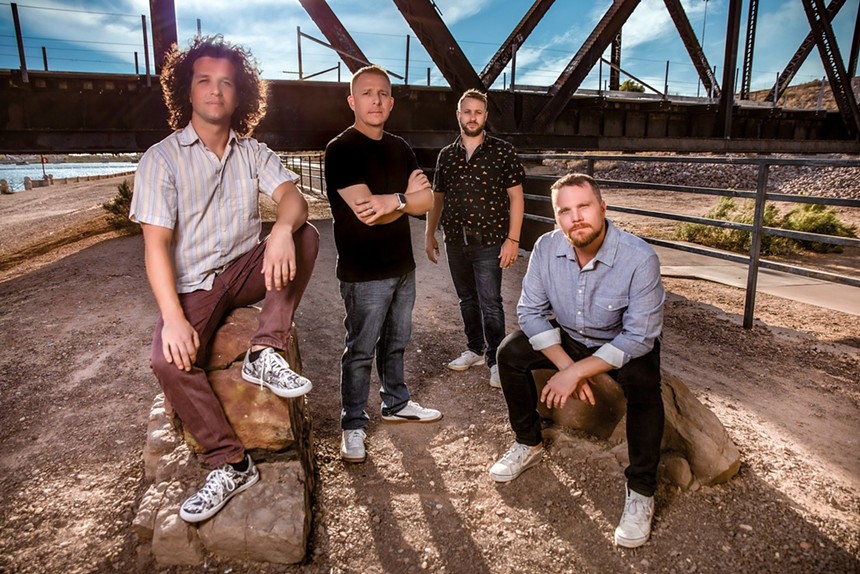 Friday, December 30, and Saturday, December 31
Marquee Theatre, 730 North Mill Avenue, Tempe
When we think of jam bands, there are certain genres of music we associate with the scene. Reggae, jazz, Deadhead rock, and even a bit of white-boy funk. Ska, however, doesn’t readily come to mind. It’s so high energy, so manic, so at odds with the “let’s tunnel into this mellow groove for 45 minutes” ethos of jam music. Pop the hood of jam outfit Spafford and dig around to see what powers their sound and you’ll find an engine powered by ska (along with some electro-pop, jazz, and funk). Put simply, the Phoenix-based Spafford aren’t afraid to get their two-tone and their toke on. Founded on New Year’s Eve in 2009, Spafford came together after its members met at an open mic night in Prescott. Discovering a powerful chemistry between them, the group developed an improvisational style that blended their different musical backgrounds (which, yes, includes a healthy dose of ska). A DIY band, they self-release their own records and regularly post live streams and recordings of their shows on their website. Each Spafford performance is a fresh tasty stew of old and new ingredients, mixed together to create something you’ll never be able to experience again. 8:30 p.m., $35-$80 via ticketweb.com. Ashley Naftule

Roger Clyne and the Peacemakers will bring the party to Crescent Ballroom this weekend.
Ash Ponders

Roger Clyne and the Peacemakers

Friday, December 30, and Saturday, December 31
Crescent Ballroom
Say what you will about Roger Clyne's talents (which are pretty substantial), when it comes to instigating a party, the native Arizonan is quite skilled. The stories surrounding the raucous Refreshments shows he was a part of back during the Fizzy Fuzzy Big & Buzzy days have been trumped by the kind of off-the-hook wingdings he hosts as frontman for the Peacemakers. The tequila-soaked "Circus Mexicus" beach blast held in Puerto Peñasco draws thousands of Peaceheads every year, for instance. This weekend, the band will stage a New Year’s Eve party of sorts and bid farewell to 2022 with a pair of performances at Crescent Ballroom. You can expect the usual high-energy sets by the band as they trout out such favorites as “Mekong,” “Nada,” and (of course) “Banditos.” The Friday night performance, which starts at 7 p.m., is technically sold out (though you can try hitting up the secondary market), but tickets are still available for Saturday’s gig. Doors open at 3:30 p.m. With The Vandoliers; $45 via seetickets.us. Benjamin Leatherman

Saturday, December 31
The Lost Leaf 914 North Fifth Street
After being on the brink of closure earlier this year, downtown Phoenix bar The Lost Leaf is back to being a hub for music, art, and culture on Roosevelt Row. They’re celebrating the New Year with the Coming for '23 party, and the stacked local lineup includes music by Apetight, Djentrification, Indygo The Martian, Jerusafunk Combo, Meager Bodies, Pijama Piyama, Solokestra, Stoneypie, Sueño, Taeps, Tatiana Crespo, and Vinyl Vagos. There’ll be stages set up inside, in the backyard, and next door. Local artists Gorb, Sierra Joy, and The Lights Witch will provide the visuals. 8 p.m., $15/$20 via seetickets.us. Jennifer Goldberg

A look inside the massive Where?House arts space.
Chris Patrick

Saturday, December 31
Walter Where?House, 702 North 21st Avenue
The United States government might not acknowledge electronic dance music artist David Sugalski as Poland’s actual ambassador to our country (officially, it diplomat and politician Marek Magierowski), but they’d be hard-pressed not to recognize his skills as a beatsmith, DJ, and producer. The Pennsylvanian-born EDM freak brings dance floors to life with his potent tracks that mix melodic and funky grooves with elements of electronica. And he does it while wearing a snazzy yellow and blue jumpsuit. This weekend, he’s scheduled to headliner the New Year’s Eve festivities at Walter Where?House with support from local DJs Lance Fairchild and Soundslurp (the duo of Soundscrybe and Twyatt Earp). 8:30 p.m., $50/$55 via seetickets.us. Benjamin Leatherman
KEEP PHOENIX NEW TIMES FREE... Since we started Phoenix New Times, it has been defined as the free, independent voice of Phoenix, and we'd like to keep it that way. With local media under siege, it's more important than ever for us to rally support behind funding our local journalism. You can help by participating in our "I Support" program, allowing us to keep offering readers access to our incisive coverage of local news, food and culture with no paywalls.
Make a one-time donation today for as little as $1.