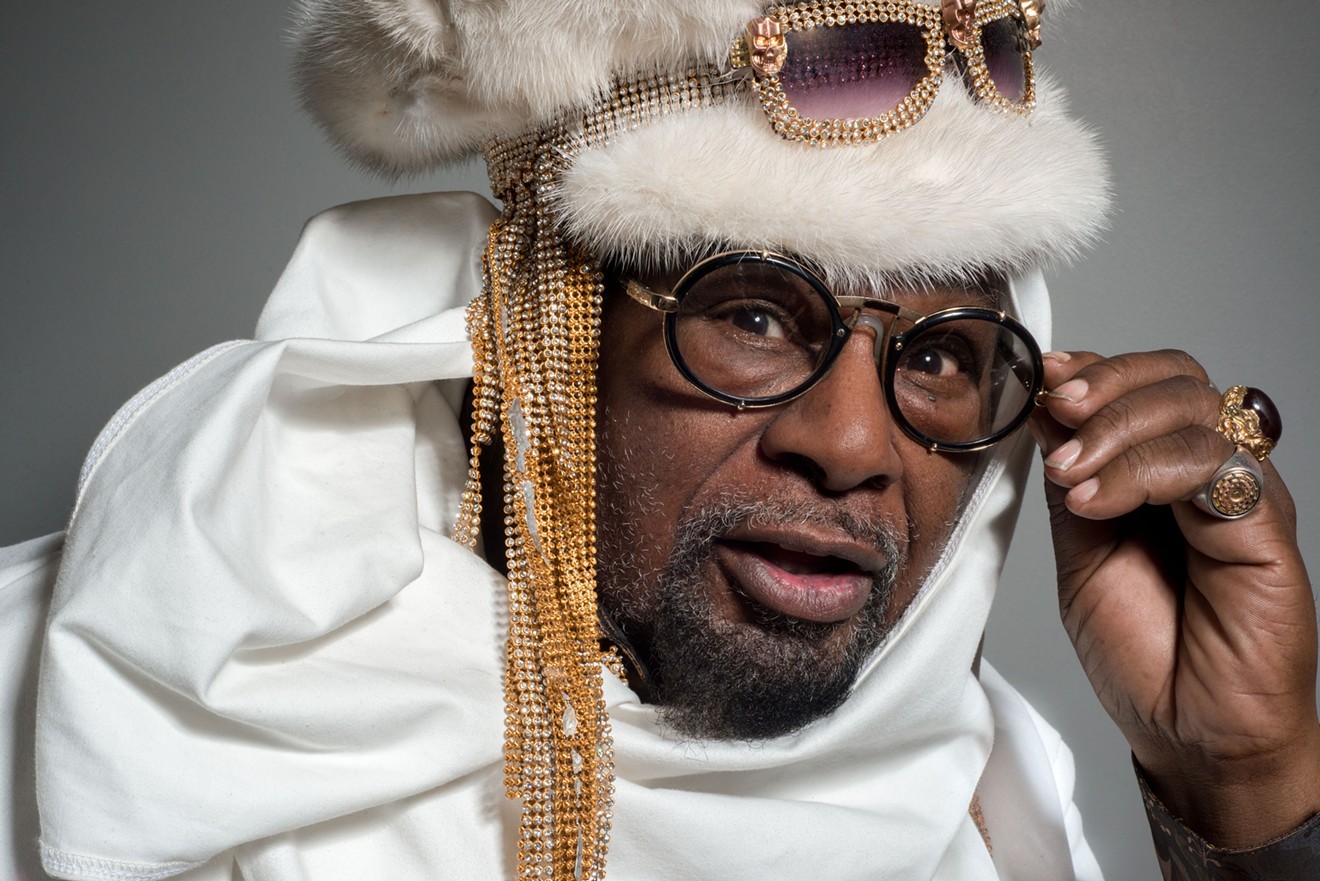 George Clinton & Parliament-Funkadelic are scheduled to perform on Friday, January 13, at Celebrity Theatre. William Thoren
Memorable live music experiences await concertgoers across the Valley this weekend. To wit: The “Godfather of Funk” George Clinton is bringing the mothership back to town again (this time with no plans to retire), gospel act The Blind Boys of Alabama will team up with bluesmen Charlie Musselwhite at the MIM, and various local bands will pay tribute to the Pixies during a benefit show.

Other options this weekend include sailing the seas of soft rock with Yächtley Crëw, celebrating the vinyl release of JPW’s debut album, catching a performance by singer-songwriters Tim Kasher and former Valley resident Sean Bonnette (of AJJ fame), or exploring an “immersive playground” at the latest HoriZen Music and Arts Festival.

More details about each gig can be found below. For even more live music happening in the Valley from Friday, January 13, to Sunday, January 15, check out Phoenix New Times’ concert listings.

Friday, January 13
Marquee Theatre, 730 North Mill Avenue, Tempe
The Marquee Theatre will transform into a Catalina wine mixer writ large as this Southern California-based yacht rock tribute act will drop anchor in Tempe for an evening of breezy and cheesy tunes. Adorned in costumes and armed with a boatload of covers of soft rock’s greatest hits, the sextet (which features such members as “Philly Ocean,” “Sailor Hawkins,” “Pauly Shores,” and “Baba Buoy”) will charm you with their shtick. Feel free to sway to such throwback radio favorites by Hall and Oates, Looking Glass, Bee Gees, Toto, and Air Supply while the smooth sounds carry you away during your musical cruise. Wine spritzers are optional. 9 p.m., $31-$60 via ticketweb.com. Benjamin Leatherman
click to enlarge

Friday, January 13
Celebrity Theatre, 440 North 32nd Street
If you missed George Clinton’s last two “farewell” tours when they rolled through the Valley, the living legend is bringing the mothership back our way for another gig. So is the 81-year-old icon finally hanging up the mic for good after serving up more than 50 years of funk? Honestly, we can’t say, and neither can Clinton (who’s stated in a recent interview that “you might not be able to get rid of me for a while”). Just be glad you’ve got another chance to see the man whose funk-drenched tunes born from a fusion of jazz, R&B, and psychedelic rock have inspired everyone from The Roots, Snoop Dogg, and Kendrick Lamar to the Red Hot Chili Peppers and Fishbone. 8 p.m., $38-$69 via etix.com. Benjamin Leatherman

The gospel vocalists of the Blind Boys of Alabama.
Jim Herrington

Friday, January 13, and Saturday, January 14
Musical Instrument Museum, 4725 East Mayo Boulevard
Legendary gospel act The Blind Boys of Alabama and blues legend Charlie Musselwhite bring almost a century of American pop music with them wherever they go, and continue to breathe life into older modes of songcraft with their intimate and expressive performances. Musselwhite has played with a who’s-who of blues greats, playing his harmonica and guitar with the likes of Muddy Waters and Howling Wolf. As for the Blind Boys, they’ve been reinvigorating the gospel tradition for decades with a rootsy traditionalism informed by nearly seven decades of working together. It’s not every day you get to catch working musicians in concert who were performing before Elvis sang his first tune and see them still operating with such force and verve. Musselwhite and the Blind Boys of Alabama are witnesses and participants in the deep history of music, which makes the Musical Instrument Museum a fitting venue to host their show. 7:30 p.m., $75.50-$95.50 via mim.org. Ashley Naftule Saturday, January 14
Crescent Ballroom, 308 North Second Avenue
Jason P. Woodbury is a Renaissance man here in the Valley. He’s been a writer and editor (including for Phoenix New Times); hosted several podcasts (including for Wastoids); and even performs in two bands, Kitimoto and the solo project JPW. It’s the latter outfit that’s been Woodbury’s focus as of late, as he released JPW's debut album Something Happening / Always Happening last September via Fort Lowell Records. This weekend, he’ll celebrate the album’s vinyl release with a show on Saturday evening at Crescent Ballroom. With Dad Weed, 7 p.m., free. Chris Coplan
click to enlarge 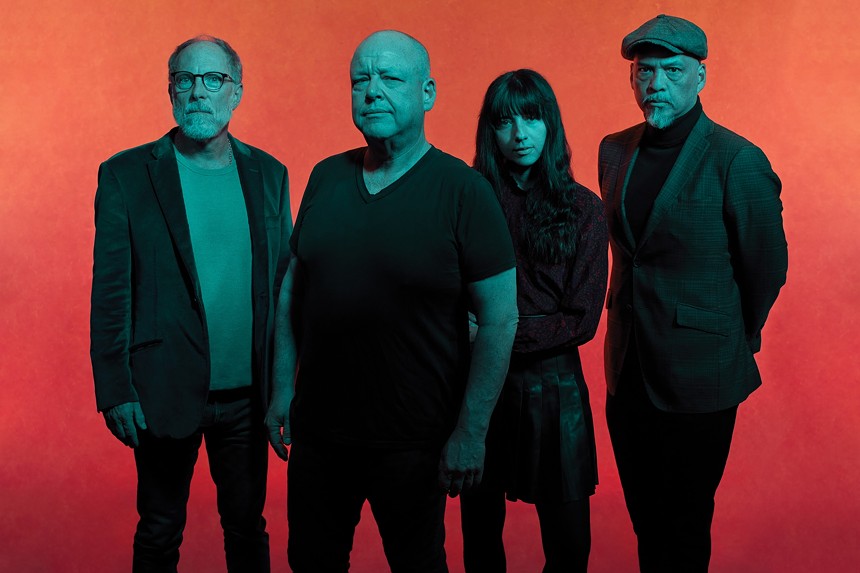 Phoenix bands will pay tribute to The Pixies this weekend at the Rhythm Room.
Tom Oxley

This Monkey's Gone to Phoenix: A Pixies Tribute

Saturday, January 13
The Rhythm Room, 1019 East Indian School Road
Imitating the Pixies is nothing new in the rock world. Musicians have been aping the loud-quiet-loud dynamics of the legendary alternative band’s guitar-driven sound for decades (heck, the late Kurt Cobain of Nirvana openly admitted to doing so in a 1994 Rolling Stone interview). This weekend, local “sludge pop” act Joan of Arkansas and six other bands from the Valley scene — including Dirt Skirt, Ghost in the Willow, Goodbye Ranger, Black Caesar Soul Club, and Gnarwhal Jrz. — will continue the practice, albeit in loving tribute to the Pixies. Each band will cover various Pixies songs during the show, which takes its name from the 1989 song “Monkey Gone to Heaven.” No one’s posted their set lists yet, but we’re guessing you’ll hear renditions of such favorites as “Here Comes Your Man,” “Caribou,” and “Where Is My Mind?” during the evening. Proceeds from the gig will benefit local charity Homeward Bound. 8 p.m., $10 at the door. Benjamin Leatherman

Saturday, January 14
Valley Bar, 130 North Central Avenue
Think of a one-man band: cymbals on the elbows, drum on the back, horns under the arms, and tambourines on the knees creating a cacophony of sound designed to annoy passersby. Now, try to envision That 1 Guy, a.k.a. Mike Silverman, as he takes the one-man band concept to a whole new level with the wide-ranging sounds created on his homemade Magic Pipe. In fact, this 1 Guy sounds like a handful as he drifts through prog-rock overtures, funk dance grooves, avant-classical passages, and mind-melting free jazz expressionism. Though Silverman does have structured songs, his background practically dictates a need for improvisation and going off on sonic adventures. This month, he’s bringing his In The Gnu Gnargaverse tour to downtown Phoenix. 7 p.m., $16/$18 via seetickets.us. Glenn BurnSilver

Saturday, January 14, and Sunday, January 15
Pemberton PHX, 1121 North Second Street
Looking to satisfy your electronic dance music cravings this weekend? You could hit up any number of nightclubs across the Valley to get your fix, or you could spend an afternoon soaking up sounds spun by DJs and producers while also getting a dose of art and culture at the latest HoriZen Festival. The sprawling property of the Pemberton in downtown Phoenix will host the two-day affair, which will also feature yoga and breathwork sessions, art installations, live painting, food trucks, craft cocktail bars, and more. Chicago-based instrumental beat-smith Edamame and organic house/downtempo artists Koresma and Akriza will headline the festival’s DJ lineup, which will also include Bosa, Morillo, Scott Nice, Eddy Hart, Edward Joseph, Slick Floyd, The Goob, and Marama. 2:30 p.m. on Sunday, 1:30 p.m. on Sunday, $45-$80 via eventbrite.com. Benjamin Leatherman Sunday, January 15
The Rebel Lounge, 2303 East Indian School Road
Mick Jagger said it best in 1966: What a drag it is getting old. Tim Kasher wouldn’t disagree, as the perils and pitfalls (and surprising pleasures) of getting older are his chief lyrical concerns on his 2022 album Middling Age. The frontman of both The Good Life and Cursive unpacks the compromises and complications of hitting the middle of the road, exploring the anxieties that come when wondering if you’ve wasted your life and fear of what comes next. Fans expecting the vitriol and aggression of his best Cursive records might be disappointed, though, as this is a far more mellow affair. But while his guitar playing might not draw blood, his words certainly do. Kasher continues to collapse within himself as a songwriter, which isn’t a bad thing: few songwriters are as good at plumbing the depths of self-loathing, self-recrimination, and self-deprecation as he can. Kasher gazes deep into his navel and sees things that would turn H.P. Lovecraft’s hair white. It’s a gift that hasn’t dimmed with middle age. He’s joined on his current tour by AJJ co-founder (and onetime Valley resident) Sean Bonnette and both singer-songwriters will perform selections from across their respective careers. With Veronica Everheart; 8 p.m., $16/$18 via seetickets.us. Ashley Naftule


Davina and the Vagabonds

Sunday, January 15
Musical Instrument Museum, 4725 East Mayo Boulevard
Davina and the Vagabonds are a whirlwind of bluesy, jazzy, and rootsy fun in the vein of Squirrel Nut Zippers, Asylum Street Spankers, or many similar acts mining the broad pantheon of Americana. Centered on the magnetic presence and intoxicating vocals of songstress/pianist Davina Sowers and backed by brass musicians and a Hammond B3 organ, the five-member ensemble create a potent concoction of neo-soul, jazz, and swing bubbling over with energy and verve. It’s fun, lively music that’s guaranteed to get toes tapping in the audience at the Musical Instrument Museum when Davina and the Vagabonds amble through on Sunday evening. 7:30 p.m., $33.50-$49.50 via mim.org. Benjamin Leatherman
KEEP PHOENIX NEW TIMES FREE... Since we started Phoenix New Times, it has been defined as the free, independent voice of Phoenix, and we'd like to keep it that way. With local media under siege, it's more important than ever for us to rally support behind funding our local journalism. You can help by participating in our "I Support" program, allowing us to keep offering readers access to our incisive coverage of local news, food and culture with no paywalls.
Make a one-time donation today for as little as $1.
Chris Coplan has been a professional writer since the 2010s, having started his professional career at Consequence of Sound. Since then, he's also been published with TIME, Complex, and other outlets. He lives in Central Phoenix with his fiancee, a dumb but lovable dog, and two bossy cats.
Contact: Chris Coplan
Follow:
Twitter: @CCoplan