Destroy Lonely is scheduled to perform on Saturday, January 21, at The Van Buren. Live Nation
We’re most of the way through January and there are still plenty of big concerts left to see this month at metro Phoenix venues. This weekend, for instance, will feature performances by living legends like Smokey Robinson and Bruce Hornsby, as well as rising stars like rapper Destroy Lonely and norteño artist Carin Leon. Read on for more details about their gigs and other notable shows in the Valley from Friday, January 20, to Sunday, January 22. You can also check out Phoenix New Times concert listings for more live music. Bruce Hornsby knows how to bring the rock.
Keith Lanpher

Bruce Hornsby and the Noisemakers

Friday, January 20
Scottsdale Center for the Performing Arts, 7380 East Second Street, Scottsdale
Bruce Hornsby has had a storied career as a rock ‘n’ roll performer, songwriter, and side man. From his time with Bruce Hornsby and the Range (1984 to 1991) to a stint with the Grateful Dead (1988 to 1995), the 68-year-old musician has enjoyed one of the more successful careers of any of the late-80s Grammy winners for Best New Artist. His song "The Way It Is" achieved number-one status on the U.S. and Canadian charts and cemented Hornsby as one of the most widely recognized songwriters in the world, even if many fans would have walked right by him on the street without noticing him. The unassuming singer and keyboardist has continued to create great music, with an easy style and accessible sound, for the past 30-plus years. And there seems to be no end in sight. Hornsby has collaborated with Sting, Eric Clapton, Bob Dylan, and many others while continuing to write and record his own music. Later this month, Hornsby brings his current band, The Noisemakers, to Scottsdale. 8 p.m., $58-$85 via scottsdaleperformingarts.org. Tom Reardon Friday, January 20
Highlands Church, 9050 East Pinnacle Peak Road, Scottsdale
Singer-songwriters Shawn Colvin, Marc Cohn, and Sarah Jarosz are nothing if not esteemed. Between the three of them, they’ve collectively won eight Grammy Awards and sold millions of records. All three are firmly in the folk vein, tapping into the interconnected realms of bluegrass (Jarosz), alt-country (Cohn), and Americana (Colvin). Cohn is best known for writing the influential 1991 hit “Walking in Memphis,” but also has such notable tunes as "Silver Thunderbird," "True Companion," and "Walk Through the World." Colvin’s no slouch in the songwriting department, as 1998’s “Sunny Came Home” charted highly on the Billboard Hot 100 and won Grammys for both song of the year and album of the year. Jarosz has been acclaimed for her bluegrass-infused rootsy folk music and was described as “a songwriter of uncommon wisdom” by the Austin Chronicle. 7:30 p.m., $34-$76 via azmusicfest.com. Benjamin Leatherman

Saturday, January 21
Marquee Theatre, 730 North Mill Avenue, Tempe
Hailing from Colorado, the Yonder Mountain String Band is one of the nation’s preeminent jamgrass band. Imagine the traditional instrumentation of bluegrass crossed with the digressive, loose improvisations of jam band music and you’ve got a sense of the musical Frankenstein that is jamgrass. In the wrong hands, it’s a rampaging monster of corny vibes and never-ending banjo solos, but you can put your pitchforks and torches down when Yonder Mountain String Band take the stage. YMSB is a musical phoenix, rising from the ashes of Dave Johnston’s old band The Bluegrassholes (yes, you read that right). Fiddles, guitars, banjo, and mandolins come together to create a freewheeling sound anchored by the group’s collective vocals. They play a mix of originals and covers, which include an infectious take on King Harvest’s “Dancing in the Moonlight.” Their latest album, 2022's Get Yourself Outside, is Grammy nominated for Best Bluegrass Album. 8 p.m., $30-$60 via ticketweb.com. Ashley Naftule

Saturday, January 21
Mesa Arts Center, 1 East Main Street, Mesa
Music legends don’t get any bigger than Smokey Robinson. Widely viewed as one of the greatest singer-songwriters ever (no less a source than Bob Dylan considers him to be “America's greatest living poet”), the silky-voiced Detroit native is a national treasure who was the creative force behind dozens of R&B, soul, and pop hits of the ‘60s and ‘70s. Robinson’s career took off in the late ‘50s as a member of The Miracles, resulting in such gems as “Shop Around,” “Who's Loving You,” and “The Tears of a Clown.” Working behind the scenes at Motown Records, he penned songs for The Temptation (“My Girl,” “Get Ready”) and such artists as Mary Wells (“My Guy”), the Four Tops (“Stillwater”), and Marvin Gaye (“Ain't That Peculiar”). Robinson is still going strong at age 82 and will bring his glorious pipes to the Ikeda Theater at Mesa Arts Center later this month. 8 p.m., $60-$175 via mesaartscenter.com. Benjamin Leatherman

Saturday, January 21
The Van Buren, 401 West Van Buren Street
Shit-talking is an art form. While Atlanta’s Bobby Wardell Sandimanie III (a.k.a. Destroy Lonely) has yet to paint his masterpiece, his brag game is strong on “NOSTYLIST.” “Diamonds flooded like a pool, yeah, my necklace wet as shit,” Destroy Lonely spits. Boasting that he’s more fly than a pigeon, the young rapper has good reason to be feeling himself: his profile has steadily climbed over the last few years, especially after getting signed to Playboi Carti’s Opium label. Already turning heads with his stylish appearance and the unique beats on his mixtape, Destroy Lonely looks like he’s about to blow up in 2023. Destroy Lonely’s debut studio album No Stylist is packed with strange instrumentals: beats that stutter and warp, as though they’re fucked up on the Xanax that inspired his name (Sandimanie embraced the Destroy Lonely moniker after battling through substance abuse and feelings of isolation). He rides the beat with serene confidence, dropping boasts and threats and comedic asides with the poise of someone who’s been doing this a lot longer than he is. Considering his growing popularity, loneliness is one thing he won’t have to worry about this year. 8 p.m., $37 via livenation.com. Ashley Naftule

Saturday, January 21
Desert Diamond Arena, 9400 West Maryland Avenue, Glendale
First, the good news: you can still get into this weekend’s concert at Desert Diamond Arena in Glendale, the latest stop on the norteño artist’s latest world tour. And the bad news? Expect to pay $100 or more for tickets on the secondary market. It’s a consequence of Leon’s ever-growing fame. He won a Latin Grammy for Best Regional Mexican Song last fall for “Como lo hice yo,” his collaborative track with Mexican pop band Matisse. Leon’s touring in support of his 2022 live album Cura Local (En Vivo), which was a big hit on YouTube. 8 p.m. Benjamin Leatherman 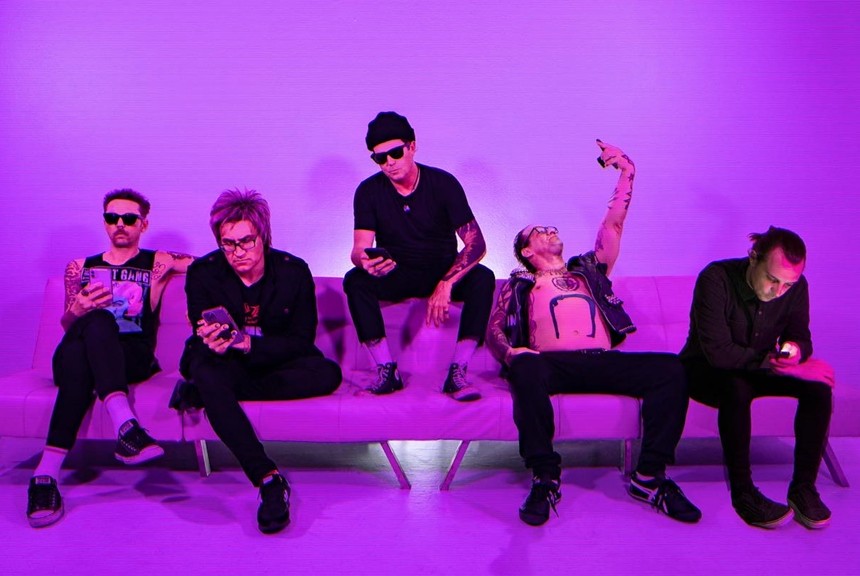 Sunday, January 22
Crescent Ballroom, 308 North Second Avenue
San Diego punk band Unwritten Law left their high-water mark on commercial music charts in the early 2000s with their LP singles "Seein' Red" and "Save Me," and while the band hasn't appeared in the mainstream limelight since then, a devout fan base has kept them alive and well. They’ve endured numerous lineup changes over the years – including losing members like Ace Von Johnson, Tony Palermo, John Bell, and Rob Brewer – but have kept on going with their current lineup of Scott Russo, Wade Youman, Jonny Grill, Scotty Mac, and Chris Lewis. Last year, Unwritten Law put out The Hum on Cleopatra Records, their first album in more than a decade, and are touring in support of the release. With Zebrahead, Tyler Posey, and Tony Lovato; 7 p.m., $25/$30 via seetickets.us. Caleb Haley
KEEP PHOENIX NEW TIMES FREE... Since we started Phoenix New Times, it has been defined as the free, independent voice of Phoenix, and we'd like to keep it that way. With local media under siege, it's more important than ever for us to rally support behind funding our local journalism. You can help by participating in our "I Support" program, allowing us to keep offering readers access to our incisive coverage of local news, food and culture with no paywalls.
Make a one-time donation today for as little as $1.