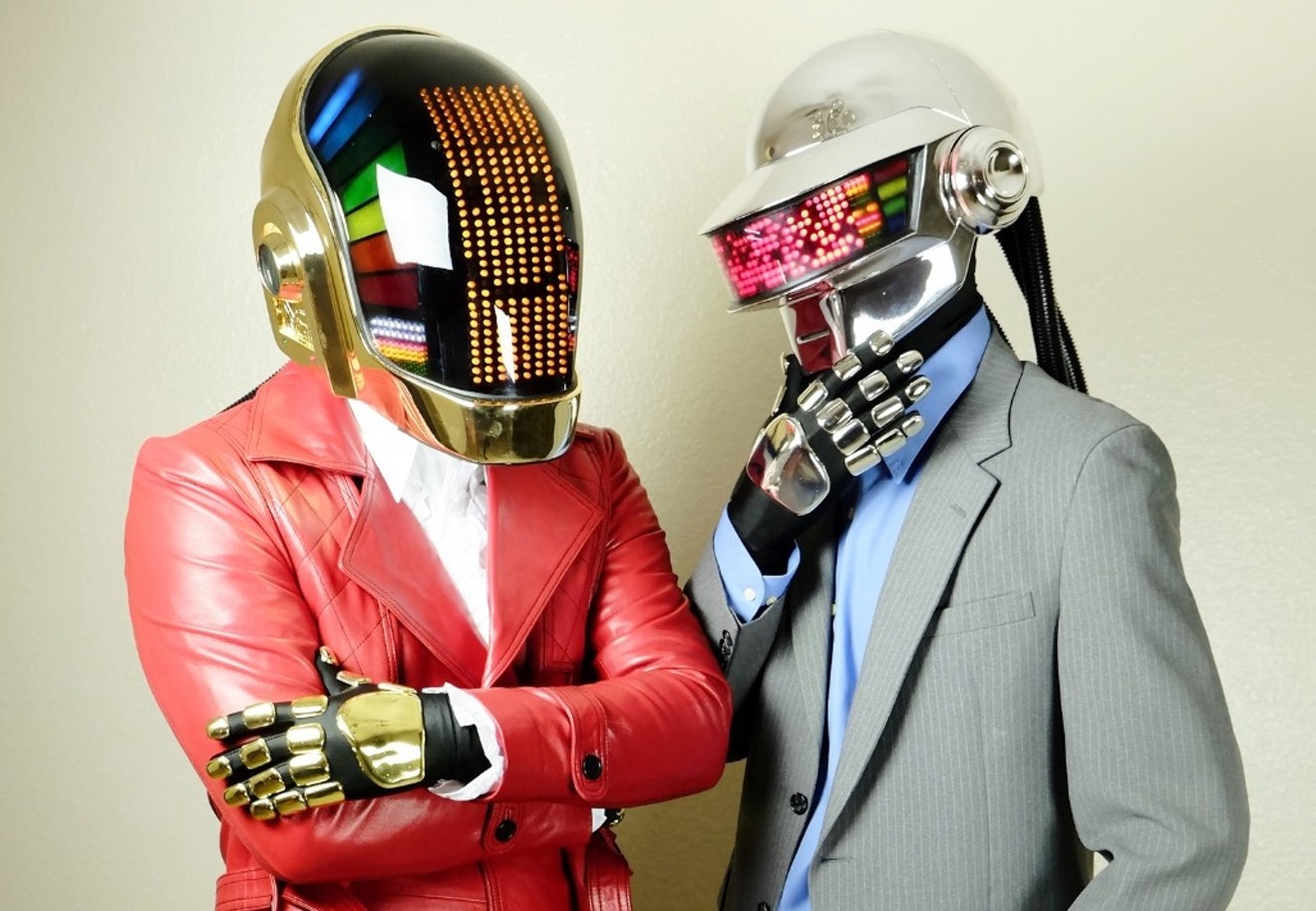 More info about each concert can be found below. Be sure to hit up Phoenix New Times’ online music listings for even more gigs around the Valley this weekend.

Friday, November 25
The Rhythm Room, 1019 East Indian School Road
Esteemed blues-rock guitarist Micki Free has a resume filled with big names and memorable experiences. The Texas-born indigenous artist of Cherokee and Comanche descent has performed alongside the likes of ZZ Top’s Billy Gibbons, had a stint in the mid-’80s with R&B/soul act Shalamar, and collaborated with guitarists Gary Clark Jr., Steve Stevens, Christone “Kingfish” Ingram. (Also of note: Free was also part of the “shirts against the blouses" basketball game between Charlie Murphy’s crew and Prince and the Revolution made famous by a skit on Chapelle’s Show.) After spending two years during the pandemic crafting his latest album, Turquoise Blue, Free is back on the road touring in support of the 14-track release and will take the stage at local blues hub the Rhythm Room this weekend. 8 p.m., $20/$25 via seetickets.us. Benjamin Leatherman One More Time: A Tribute to Daft Punk

Friday, November 25
The Van Buren, 401 West Van Buren Street
One More Time does a spot-on imitation of Daft Punk in concert and does it well. Phenomenally well, even, from the identical recreations of the iconic helmets and jumpsuits of the Grammy-winning and quasi-robotic French electronica duo (including neon versions inspired by Tron: Legacy) to the pyramid-like staging that's straight outta the act's landmark Alive 1997 tour. One More Time has Daft Punk down so well that it even mimics its flair for anonymity, asking that New Times keep the duo's real names on the down-low. Since forming in the late 2000s, the tribute act has wowed crowds across the country with its set of mixing, editing, and playing Daft Punk tracks. Catch them going harder, faster, stronger at The Van Buren this weekend. 8 p.m., $20 via livenation.com. Benjamin Leatherman

Saturday, November 26
The Van Buren, 401 West Van Buren Street
When the Montreal electro-pop trio Men I Trust titled their 2021 studio record Untourable Album, they didn’t think they would be performing anytime soon. Their wings clipped by the pandemic, Men I Trust focused on creating an expansive record that pushed their unique mixture of trip-hop, dream-pop, and Sade-esque lovers rock in new directions. It’s a dense, lush record, one that seems born to live and die in headphones and living room turntables. True to its name, it’s hard to imagine how this play would live. That saying “man makes plans while God laughs” held true for Men I Trust: conditions changed and the Untourable Album wasn’t so untourable anymore. Now Emmanuelle Proulx, Jessy Caron, and Dragos Chiriac are taking their woozy, beguiling music back on the road, turning the meditative grooves of bedroom pop songs like "Sugar" and "Before Dawn" into club-ready music. Men I Trust make music that’s perfect for winding down the night, chillout lullabies that go down as smooth as an ice-cold martini. With Homeshake; 8:30 p.m., tickets are available on the secondary market. Ashley Naftule 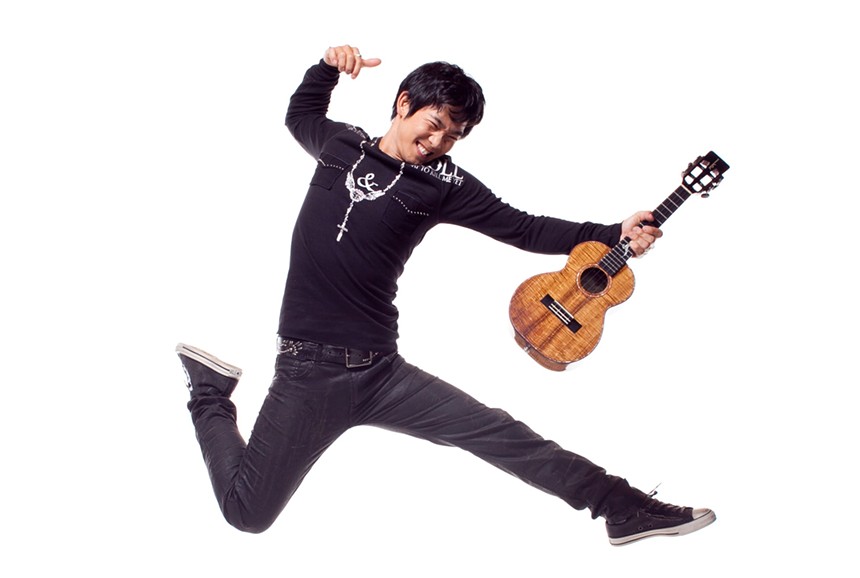 Saturday, November 26
Scottsdale Center for the Performing Arts, 7380 East Second Street
More than 50 years ago, Tiny Tim gained fame for his ukulele rendition of “Tiptoe Through the Tulips.” Today, you can find ukuleles in tiki bars and music museums and take lessons at your local bookstore, but sometimes playing the small, four-string instrument is best left to the professionals, such as Jake Shimabukuro, whose set lists feature covers for songs made famous by far different artists — including Jimmy Buffett, Van Morrison, and Queen. The Hawaii-based musician will be performing a mix of funk, jazz, and pop music at Scottsdale Center for the Performing Arts on Saturday night. 8 p.m., $28-$58 via scottsdaleperformingarts.org. Lynn Trimble

Saturday, November 26
Celebrity Theatre, 440 North 32nd Street
Since forming in 2017, regional Mexican group Eslabon Armado have been insanely prolific. The group, started by brothers Pedro and Brian Tovar with their friend Gabriel Hidalgo, paid their dues playing norteno and ranchera songs as teens, quickly building a following thanks to TikTok. Eventually growing into a quintet, Eslan Armado released four albums before 2022, each one charting high on the Regional Mexican Albums chart as well as placing high on Billboard's Latin Music lists. The brothers Tovar and their Eslabon Armado compatriots made history this year with their fifth album, Nostalgia, the first Latin group to score a top 10 album on the Billboard 200 list since Santana's Africa Speaks. Listening to Nostalgia, it’s hard not to hear the secret of its success. It’s incredibly stark music, foregrounding their group vocals over driving guitar chords that dance unpredictably like someone running on burning coals. Eslabon Armado invites you into their songs, creating empty space for you to vibe in. Compared to the thick-as-a-brick sonic density of so much radio music, having something this spare and loose to lose yourself in is refreshing. Even if you don’t understand a word that they’re saying it’s easy to feel the emotional pull of their music. 8 p.m., $49-$99 via etix.com. Ashley Naftule

Sunday, November 27
The Van Buren, 401 West Van Buren Street
Do you yearn to go back to the snotty glory days of Blink-182 and Sum 41? Do you wish to reject punk modernity and embrace tradition, to return to the days where 90 percent of a band’s creative output was about boners? State Champs doesn’t have that many songs about boners but in every other respect they are true, Pabst Blue ribbon traditionalists of pop punk. The malls may be closed, Tom DeLonge may be out there chasing UFOs, but State Champs is still here to carry the torch of Warped Tour rock into the 2020s. Hailing from Albany, the quartet's latest album is this year's Kings of the New Age. It's a thick, chunky stew of their influences: a big chunk of Fall Out Boy here, some pinches of classic Dookie-era Green Day there. The production harkens back to early-2000s pop-punks with lots of backing vocals that sound like they were recorded in a phone booth across the street from the studio. There’s nothing new here but that’s a feature, not a bug. For anyone chasing the high of hearing “Fat Lip” for the first time on modern rock radio, State Champs have got plenty of musical methadone to keep you straight. With Hunny, Between You and Me, and Barefoot; 7 p.m., $29.50 via livenation.com. Ashley Naftule
KEEP PHOENIX NEW TIMES FREE... Since we started Phoenix New Times, it has been defined as the free, independent voice of Phoenix, and we'd like to keep it that way. With local media under siege, it's more important than ever for us to rally support behind funding our local journalism. You can help by participating in our "I Support" program, allowing us to keep offering readers access to our incisive coverage of local news, food and culture with no paywalls.
Make a one-time donation today for as little as $1.