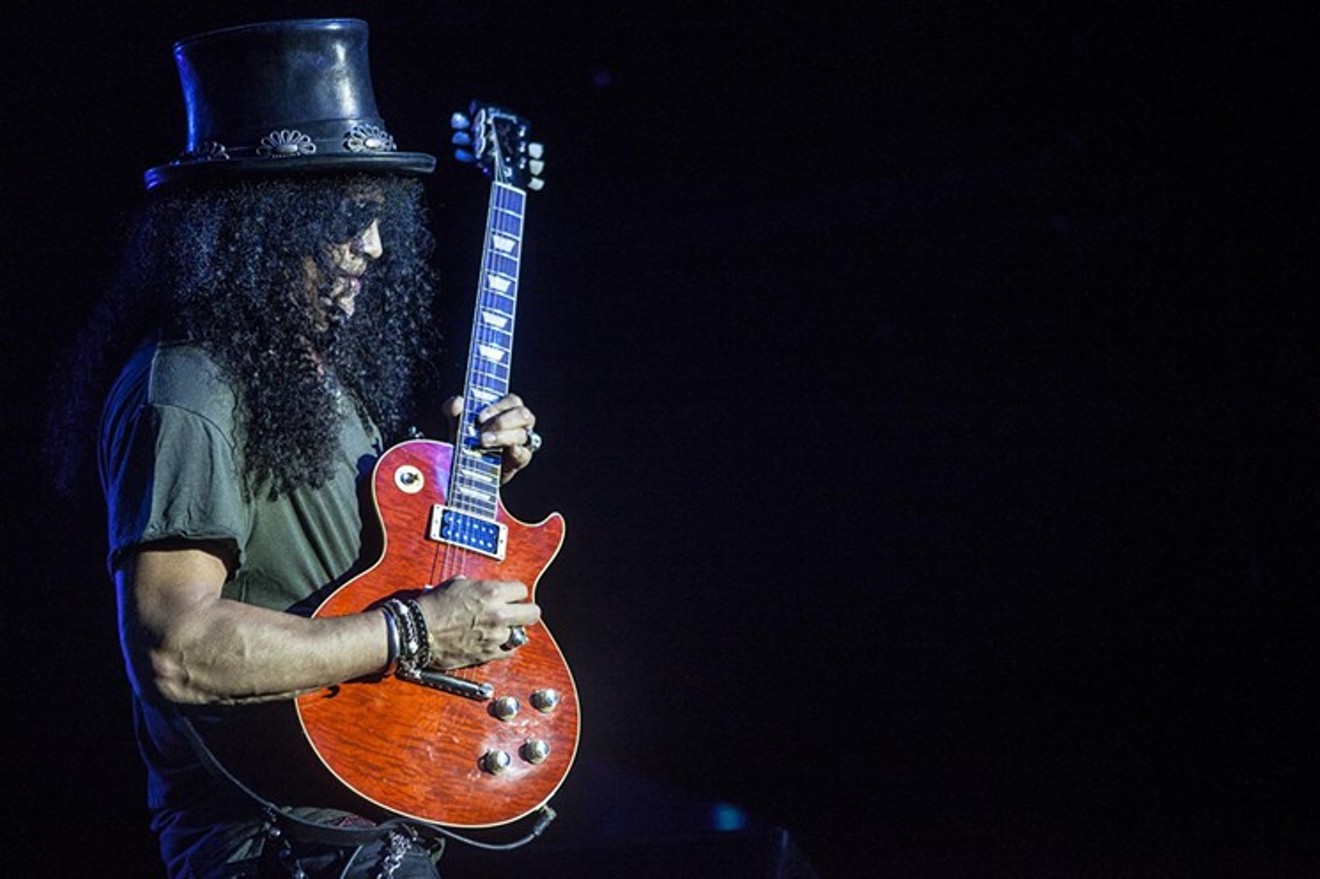 Slash is scheduled to perform on Tuesday, February 15, at Arizona Federal Theatre. Jim Louvau
We’re officially halfway through February and there are plenty of big concerts left this month to see in metro Phoenix. This week, for instance, will offer you the chance to catch performances by Slash from Guns N' Roses, rap star Wale, metalcore act Killswitch Engage, and the southern rockers and Americana artists of the Allman Family Revival.

There are even more live music happening in the Valley from Monday, February 14, to Thursday, February 17, and you can find out more by reading our rundown below or clicking over to Phoenix New Times online concert calendar.

It also goes without saying that COVID-19 and its ultra-contagious Omicron variant are still prevalent right now and some local venues will require proof of vaccination or a recent negative test result to attend.

Grammy nominee Hiss Golden Messenger, performs on Monday, February 14, at Crescent Ballroom, 308 North Second Avenue, in support of his most recent album Quietly Blowing It. Featured in many year-end, best-of lists, it was only one of three albums the band released last year along with a holiday album and its dub remix companion. The band's live shows have come to be known as communal experiences for people drawn to emotive expression and deep lyrics. With Quietly Blowing It, singer M.C. Taylor wanted to shine a light on the deepest human emotions, composing the album in his tiny home studio. Appalachian singer-songwriter Alexa Rose opens the 8 p.m. show. Tickets are $23. David Fletcher

Caribou at The Van Buren

Dr. Daniel Snaith, also known as Caribou, received a PhD in mathematics from Imperial College London with his thesis, Overconvergent Siegel Modular Symbols. That may not necessarily explain why the electronic artist has such rich textures to his intelligent dance music, but it certainly speaks a lot to Caribou's thought process. Snaith originally released music under the name Manitoba before being threatened with a lawsuit by Richard "Handsome Dick" Manitoba of punk band The Dictators. Since then, Snaith has released music under the name Caribou and Daphni — the latter being a moniker Snaith uses to release more dance-oriented music. The musician's latest album Suddenly came out in 2020 to the excitement of music critics, making its way onto several high-profile best-of lists. Colombian electronic artist Ela Minus opens for Caribou on Monday, February 14, at The Van Buren, 401 West Van Buren Street. Doors open at 7 p.m. and tickets are $26. David Fletcher

Guitar god Slash, renowned for his stints with Guns N’ Roses and rock supergroup Velvet Revolver, has had a lengthy career that has found him dabbling in blues, hard melodic rock, and various shades of metal, as well as working with artists as diverse as Michael Jackson, the Black-Eyed Peas' Fergie, Dave Grohl, Ol' Dirty Bastard, Ozzy Osbourne, and Alice Cooper. In the early 2010s, he returned to his hard rock roots by teaming up with bassist Todd Kerns, drummer Brent Fitz, and Alter Bridge frontman Myles Kennedy. The trio first joined Slash as his touring band for his self-titled 2010 solo album and eventually became known as Myles Kennedy and the Conspirators. Together with Slash, they’ve released four albums since then, including the recently released (and aptly titled) 4, each filled with the brand of hard rock and metal the guitar has become known for playing. Meanwhile, their concerts are a mix of these original songs, as well as covers of GN’R and VR hits. Expect to hear the same when the act rolls through Arizona Federal Theatre, 400 West Washington Street, on Tuesday, February 15. Dead Sara will open the 7:30 p.m. concert. Tickets are $55 to $100. Glenn BurnSilver


The Booze Bombs at Starlite Lounge and Chopper John’s

Whether you like it or not, winter visitors have invaded the Valley en masse. Some we can tolerate, others we despise. A good example of the former is the German rockabilly foursome The Booze Bombs. Consisting of a quartet of bombastic, hepcat Berliners (who have the rockabilly sound and shtick on lock), the group has made it a regular habit to visit the Valley around this time of year during their annual visits to America, staging performances for local ‘billy-loving boys and girls at numerous venues in Phoenix and around Arizona. This week, the Booze Bombers return to town for a pair of performance at local watering holes. Their first stop will be at Starlite Lounge, 4346 West Olive Avenue in Glendale, on Wednesday, February 16, before heading over to the east side the following evening for a free gig at Chopper John’s, 2547 East Indian School Road, on Thursday, February 17. Both shows start at 7:30 p.m. and will feature opening sets by local rockabilly band Tin Can Screamers. Benjamin Leatherman

Wale takes the stage at The Van Buren this week.
Calvin Bak

Wale at The Van Buren

Wale has come a long way from the enthusiastic bounce-rap style that introduced him to the masses. Debuting in the mid-2000s, early tracks like "Rhyme of the Century," “Dig Dug (Shake It),” and “Breakdown” got the rapper attention in his hometown of Washington, D.C., and on the radar of Atlantic Records, who released his debut album Attention Deficit in 2009. He later sharpened his vernacular and defined his appeal with the release of his widely respected 2011 album, Ambition, and struck gold the following year with the single "Lotus Flower Bomb” and inspired a new class of rap to rise from the underground. Wale's lyrics, combined with a keen ear for proper beats, set him apart from everyone else in the game. More albums followed, including back-to-back Billboard favorites The Gifted in 2013 and 2015’s Seinfeld-inspired The Album About Nothing. Wale’s touring behind last year’s Folarin II and is scheduled to play The Van Buren, 401 West Van Buren Street, on Thursday, February 17, with Guapdad and Cam Wallace. Tickets for the 9 p.m. show are $27 to $79. Ru Johnson

For more than 20 years now, Killswitch Engage has been a staple of the metalcore scene. Formed in Massachusetts, the iconic quintet helped herald in a new wave of heavy metal in the early 2000s, which saw the rise of the likes of As I Lay Dying, Gojira, and Lamb of God. On tour in support of their eighth studio album Atonement – which some fans have argued might be their best to date – Killswitch Engage visits Tempe’s Marquee Theatre, 730 North Mill Avenue, on Thursday, February 17. Metalcore bands August Burns Red and Light the Torch will open the 7 p.m. concert. Tickets are $37. Matthew Keever

The eclectic and influential Leo Kottke.
On Tour PR

No one's ever accused Kottke of being a pop star. But somehow, he's managed to parlay his awesome aptitude on the acoustic guitar, a knack for instrumental intricacy that's undeniably complex yet somehow warm and inviting, and occasional vocals that amusingly and defiantly stick to the low road into a half-century-long career. His debut long-player, 6- and 12-String Guitar, arrived in 1969, and he released a steady stream of material for decades while quietly influencing generations of pickers, as the dozens of online videos showing amateur players trying to master his licks demonstrate. Over the years, Kottke, who lives in Minnesota, has become a hero to famous musicians and seems satisfied to occupy his own particular reality, which is different enough from the one the rest of us occupy to render his commentary both insightful and delightfully bizarre. Kottke’s scheduled to perform at the Musical Instrument Museum, 4725 East Mayo Boulevard, on Thursday, February 17, along with renowned drummer Dave King. The show starts at 7 p.m. and tickets are $49.50 to $54.50. Michael Roberts

The annual Allman Family Revival tribute tour is returning to the road in celebration of Gregg Allman’s birthday. Launched by Devon Allman in 2017 as a tribute to his dad, the 19-city tour rolls into Arizona Federal Theatre, 400 West Washington Street, on Thursday, February 17. What was initially began as a one-time family affair in honor of the elder Allman four years ago has become a fan favorite after word spread about the tour’s intense four-hour jam sessions and special appearances. Devon, who resembles his late father, promises a hot night. It will start with a warm-up set by his project with Duane Betts, the Allman Betts Band, before an all-star cast – including musicians Robert Randolph, North Mississippi Allstars’ Cody and Luther Dickinson, Jimmy Hall, Alex Orbison, Art Edmaiston, and blues guitarist Samantha Fish – performs. The music kicks off at 7:30 p.m. Tickets are $38.50 to $85. Nathalie Baret
KEEP PHOENIX NEW TIMES FREE... Since we started Phoenix New Times, it has been defined as the free, independent voice of Phoenix, and we'd like to keep it that way. With local media under siege, it's more important than ever for us to rally support behind funding our local journalism. You can help by participating in our "I Support" program, allowing us to keep offering readers access to our incisive coverage of local news, food and culture with no paywalls.
Make a one-time donation today for as little as $1.