Dorian Electra is scheduled to perform on Wednesday, February 23, at Valley Bar. Earth Agency
True Beliebers of the Valley, we feel your pain. You’ve been patiently waiting for pop prince Justin Bieber to finally stage his first metro Phoenix concert in years, only to have it repeatedly rescheduled due to the pandemic. And, as you may have heard, it’s been put off yet again.

Bieber tested positive for COVID-19 this past weekend and, as a result, rescheduled the first few stops of his Justice tour, including a performance on Tuesday night at Gila River Arena in Glendale. (The show has been moved to Thursday, June 30. All previously purchased tickets will be honored.)

Read on for further details or check out Phoenix New Times’ online concert listings for more live music around town. Keep in mind, multiple local venues will require proof of vaccination or a recent negative test result to attend shows.
click to enlarge 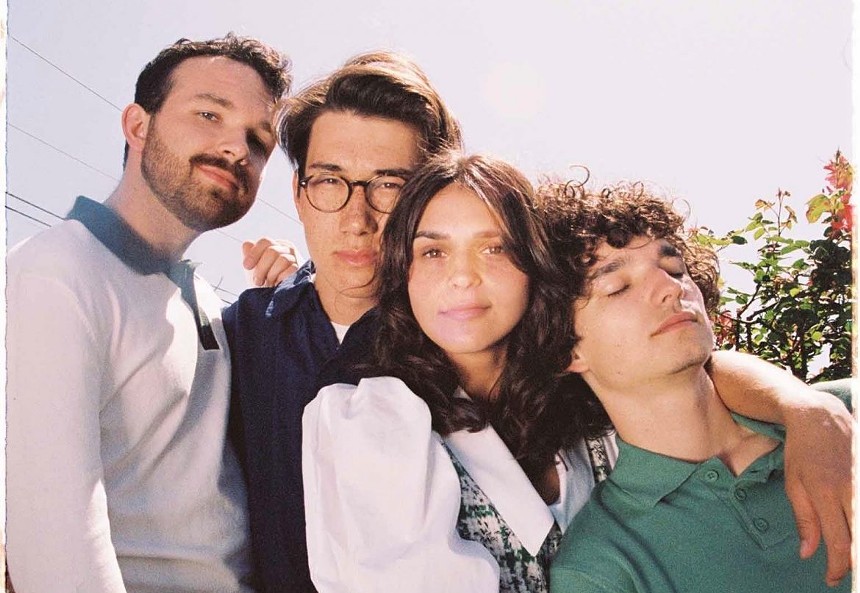 The Greeting Committee at The Rebel Lounge

The four members making up Kansas City, Missouri-based indie rock band The Greeting Committee — lead singer Addie Sartino, guitarist Brandon Yangmi, drummer Austin Fraser and bassist Pierce Turcotte — were launched on an accelerated path of success, from touring with bands like Jukebox the Ghost to hitting stages at SXSW before even graduating high school. It started with their 2015 song “Hands Down” becoming a radio hit, first on their hometown indie station, then spreading across the U.S. and peaking at No. 39 on the Billboard Alternative chart.

A pair of EPs resulted in even more success, followed by tours with MisterWives and Andrew McMahon. The band’s 2018 debut LP, This Is It, served as a personal examination of their transition into adulthood with tracks ranging from the energetic to introspective pathos. Their sophomore effort, last year’s Dandelion, also sees the band looking inward while examining what one music writer described as “the notion of a life in freefall.” They’re touring behind the album and are scheduled to perform at the Rebel Lounge, 2303 E. Indian School Road, on Monday, February 21. Indie singer-songwriter OSTON opens the 8 p.m. show. Tickets are $20. Brad LaCour
click to enlarge

Dark Tranquillity at The Nile Theater

One of the original crop of bands to spring from the fertile music scene of Gothenburg, Sweden, in the late ‘80s and early ‘90s, Dark Tranquillity have been stalwart practitioners of Nordic metal for more than three decades now. Formed in 1989 by guitarist Niklas Sundin and vocalist/guitarist Mikael Stanne, the six-piece melodic death metal act has been immensely influential and released a dozen studio albums over the years, each one different than the last. The band constantly experiments with different musical textures and vocal styles. One album will focus on heavy growling vocals and abstract riffing, while the next centers around clean soft choruses and atmospheric keyboards. Their most recent release, Moment, dropped in 2020, and is the band’s first release since lead guitarist Christopher Amott and rhythm guitarist Johan Reinholdz joined their ever-changing roster. Dark Tranquillity will invade The Nile Theatre, 105 W. Main St. in Mesa, on Monday, February 21. Kataklysm and Nailed to Obscurity will open. Tickets for the 6 p.m. show are $30. Lauren Wise

Playing major music festivals such as Lollapalooza and Bonnaroo is an especially impressive accomplishment considering indie band Magic City Hippies are entirely DIY. The project grew out of frontman Robby Hunter playing hip-hop covers in small bars and on the streets of Miami by laying down live loops of himself beatboxing, playing guitar and rapping. And though the live setup is vastly different with Pat Howard (drummer, producer) and John Coughlin (guitars, keyboards) in the band, good-time grooves remain central to the upbeat sounds performed by the self-described “alt-pop psych-funk party starters.” This vibe has carried over to both of Magic City Hippies’ full-length studio albums (2019’s Modern Animal and this year’s Water Your Garden) and will be present in the main room of Crescent Ballroom, 308 N. Second Ave., during their show on Tuesday, February 22. Indie-pop act Bay Ledges will open the 8 p.m. gig. Admission is $20. Howard Hardee
click to enlarge The members of Deafheaven.
ANTI Records

Deafheaven at The Rebel Lounge

One of the most controversial, nontraditional and high-profile groups in the greater metal scene, Deafheaven first gained attention for their 2013 record Sunbather and 2015 follow-up New Bermuda. Both albums exhibited an intense mix of black metal vocals; shoegaze-influenced production; heavy, major-key guitar riffs; and intense, poetic lyrics that gained attention from mainstream music publications like Pitchfork and earned scorn from black metal traditionalists. Beyond awards or criticism, the music is simply devastating in its impact. They’ve been nominated for a Grammy Award, toured with the likes of Russian Circles and Baroness, and released a couple of other critically adored albums, including 2021’s Infinite Granite. They’re scheduled to hit The Rebel Lounge, 2303 E. Indian School Road, on Tuesday, February 22, with local support from Holy Fawn and Midwife. Doors open at 7 p.m. and admission is $23. Douglas Markowitz
click to enlarge The Wood Brothers at Scottsdale Center for the Performing Arts

Combining elements of blues, gospel, folk and jazz, the Wood Brothers have spent 18 years cultivating an American roots sound that is uniquely their own. Fronted by brothers Chris and Oliver Wood, and accompanied by experimental multi-instrumentalist Jano Rix, the band draws its lyrical inspiration from blues and gospel traditions, meditating on the human condition and the passage of time. Particularly with their most recent album Kingdom in My Mind, The Wood Brothers try to come to grips with things that are unchangeable. What makes The Wood Brothers stand out in the Americana music scene is their ability to balance those heavy lyrics with light, and at times cheerful, arrangements that can make the listener forget they are listening to a song about not ever being able to feel happy — as in "Happiness Jones" from their Grammy-nominated album One Drop of Truth. Their performance at Scottsdale Center for the Arts, 7380 E. 2nd St., on Wednesday, February 23, starts at 7:30 p.m. Tickets are $31 to $51. David Fletcher
click to enlarge 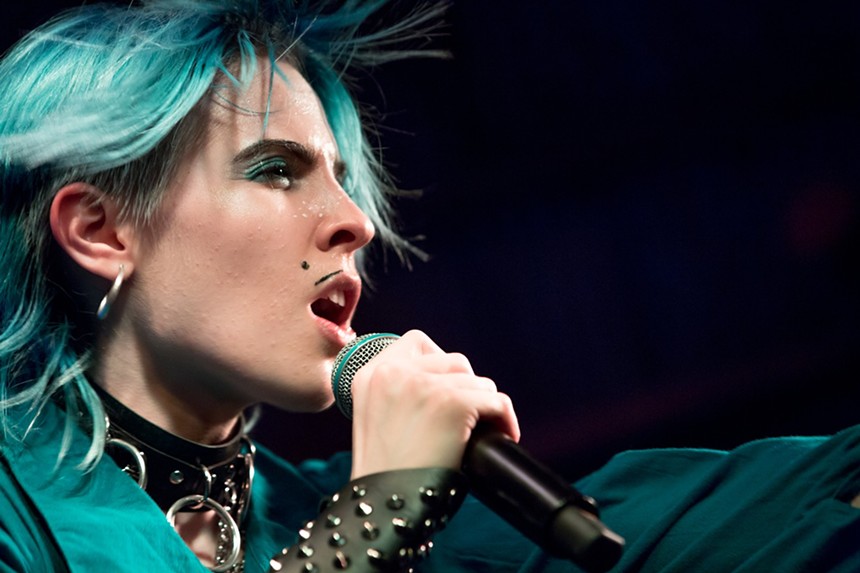 Dorian Electra sure as hell isn't afraid to be who they are. And neither should you when you rock out at their show on Wednesday, February 23, at Valley Bar, 130 N. Central Ave. The multitalented LGBTQ+ artist, whose music falls in such genres as hyperpop and futurepop, has never been afraid of tackling gender issues in a fun way, with songs such as "Clitopia," "Daddy Like" and "Femmebot." Their latest tour is in support of My Agenda, Electra’s 2020 album analyzing toxic masculinity, edgelords and incels “through a queer lens” and taking the piss out of such contentious issues with a sense of playful fun and clever pop hooks. Joining them on tour are DJ/producer Coucou Chloe and electronic/glitch-pop artist 3L3D3P. Their Valley Bar show starts at 8 p.m., and tickets can only be purchased on the secondary market. Jesse Scott
click to enlarge

Underøath at The Van Buren

Florida metalcore band Underøath kicked off their year by releasing Voyeurist, the band's ninth studio album in 25 years of existence. The 10-song effort was the first the band has put out after four years of studio silence — the longest gap they’ve gone minus a record without breaking up. The band must have been using the time wisely because Voyeurist was met with nearly universal acclaim. For this technologically advanced and visceral record, the band took the self-producing reins, and it’s a gamble that paid off. A study on the nature of life and death, Voyeurist has been called Underøath's most cohesive and coherent record by Kerrang! magazine It likely will resurface at the end of the year when critics pick their best-ofs. British Columbian metal band Spiritbox, Long Island hardcore punks Stray From the Path and Virginia metalcore act Bad Omens open the 7 p.m. show on Wednesday, February 23, at The Van Buren, 401 W. Van Buren St. Tickets are $34.50 in advance, $40 at the door. David Fletcher
click to enlarge Formed back in the '80s, Dinosaur Jr. bridged the gap between the epic guitar riffage of their '70s hard rock influences and the DIY ethos of their art-punk contemporaries like Sonic Youth. Despite the undeniable mastery of albums like You're Living All Over Me, leader J Mascis became known for his controlling nature, and tempers frayed in the band until the trio eventually splintered apart. Bassist Lou Barlow formed his equally celebrated band Sebadoh, drummer Murph joined The Lemonheads and Mascis hired new personnel for a string of major-label records in the '90s before calling it quits. In 2005, the original lineup of Mascis, Barlow and Murph reformed, and have since released five studio albums. Those include the well-regarded Farm and I Bet On Sky, as well as last year’s Sweep It Into Space. They’re scheduled to visit Crescent Ballroom, 308 N. Second Ave., on Wednesday, February 23. While the 8 p.m. concert is ostensibly sold out, you can buy tickets through resellers. Douglas Markowitz
KEEP PHOENIX NEW TIMES FREE... Since we started Phoenix New Times, it has been defined as the free, independent voice of Phoenix, and we'd like to keep it that way. With local media under siege, it's more important than ever for us to rally support behind funding our local journalism. You can help by participating in our "I Support" program, allowing us to keep offering readers access to our incisive coverage of local news, food and culture with no paywalls.
Make a one-time donation today for as little as $1.