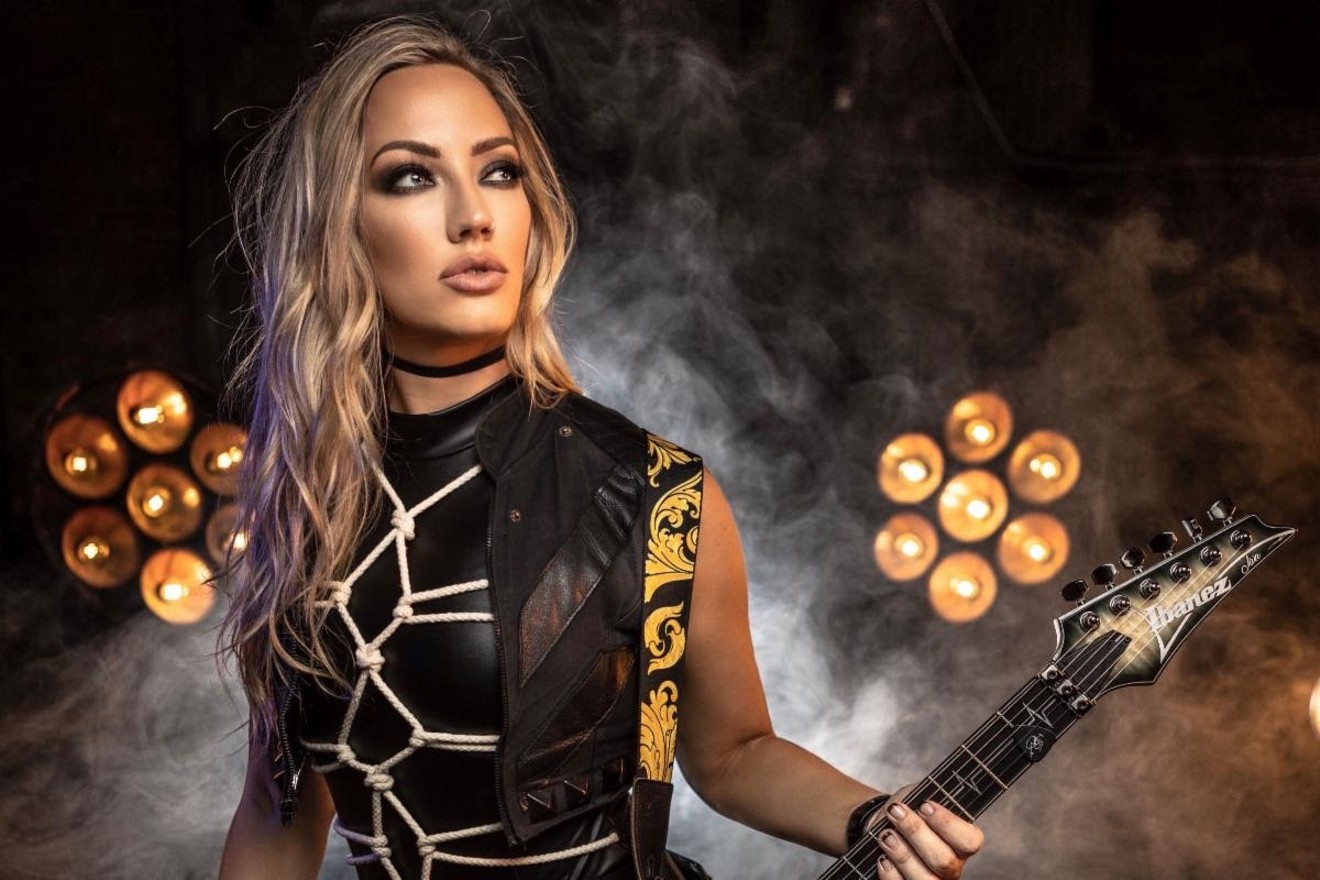 Nita Strauss is scheduled to perform on Wednesday, November 17, at The Rebel Lounge. Johnny Young
This week, you can watch costumed hyperpop duo 100 Gecs get weird, rocker Nita Strauss prove why she’s one of the best female guitarists in the world, or rapper Toosii serve up songs like “Sapiosexual” and “Poetic Pain” on stages around the metro Phoenix area.

The Valley will also witness an invasion of bands with capitalized names in the days ahead as punk act METZ, synthpop/coldwave duo BOAN, and indie-pop trio COIN are all scheduled to perform at local concert venues. Other concert highlights happening around town from Monday, November 15, to Thursday, November 18, include shows by Dale Watson, Evanescence, and The Black Angels.

Read on for more details about each of these gigs or check out Phoenix New Times' online concert listings for more music events. Keep in mind, though, that the Delta variant of Covid-19 is an ever-present danger right now and multiple local venues are requiring proof of vaccinations or a recent negative test result to attend shows. More info can be found on the ticketing sites for each concert.

Toosii is a rapper on the rise. In just this year alone, the North Carolina-based artist saw his hit single “Love Cycle” go gold, released his seventh mixtape Thank You for Believing, spit bars in 2021 BET Hip Hop Awards cypher, and made the XXL Freshman Class. Toosii (born Nau'Jour Grainger) has been earning looks since getting signed to South Coast Music Group in 2019, dropping his breakthrough track “Red Lights” (a song about the murder of his grandfather) and the fire mixtape Who Dat. More albums and mixtapes have followed and the self-described “hood romantic” (who told The Source earlier this year that he “[makes] music for the street dudes but at the same time I make music for the ladies”) racked up more than 250 million combined global streams in 2020. Not bad for an artist who was booed offstage at the age of 16. Toosii will kick off his week with a gig at Marquee Theatre, 730 North Mill Avenue in Tempe, on Monday, November 15. Doors are at 7 p.m. and tickets are $30. Benjamin Leatherman

Pianist and singer Amy Lee is the voice, face, and driving heart behind the operatic rock band Evanescence. Their fame took off with Fallen, the album that brought chart-topping hits such as "My Immortal" and "Bring Me to Life." Evanescence has seen some lineup changes since then, and after a hiatus that started in 2009, they returned to the stage in 2014. Now their back with a new album, The Bitter Truth, and is touring alongside metal/hard rock band Halestorm, which is fronted by lead singer/guitarist Lzzy Hale. Both bands roll into Arizona Federal Theatre, 400 West Washington Street, on Monday, November 15. All-female alternative rock act Plush opens at 7:30 p.m. Tickets are $39.50 to $99.50. Diamond Rodrigue

Hyperpop duo 100 Gecs will sneak into the Marquee Theatre on Tuesday.
Mikey Joyce

When you first listen to a 100 Gecs record, you might come away with a sense that this has to be a joke. “Money Machine” sounds like a blown-out bass track sung by Alvin and the Chipmunks, while "Stupid Horse" brings back memories of your regrettable high-school ska phase. "xXXi_wud_nvrstøp_ÜXXx" — a title that reads more like an early 2000s AIM username — leans into happy hardcore, and "Hand Crushed by a Mallet" feels like a chaotic remix of a pop-punk song. Yet somehow, Dylan Brady and Laura Les make it all work. As millennials' cultural clout begins to wane, Gen Z has stepped up to reshape music in its own image: a genreless amalgamation of influences that seems to point to the future while at the same time imagining living in a world where dial-up modem sounds were still a thing — and 100 Gecs are leading the way. 100 Gecs music tends to push the listener into one of two camps: They either love it or hate it. And age tends to play a significant factor, with older millennials dismissing it as "zoomer music." Decide for yourself on Tuesday, November 16, when 100 Gecs comes to Tempe’s Marquee Theatre, 730 North Mill Avenue, for an all-ages show starting at 8 p.m. Tickets are $23 to $65. Jose D. Duran


Dale Watson at The Rhythm Room

Dale Watson is the archetypical country-music artist. There’s a reason he’s often referred to as the “real deal.” Yet, despite the obvious associations, Watson claims he isn’t a country artist. In fact, he’s adamant that country music, at least in the traditional sense, no longer exists. While he’s stayed true to his roots after growing up on a diet of George Jones, Hank Williams, Lefty Frizzell, Merle Haggard, and Johnny Cash, Watson separates himself from the so-called country music that is clogging up the airwaves. He calls himself an Ameripolitan, an artist playing music in the four traditional country music senses — honky-tonk, rockabilly, Texas swing, and outlaw country. Retro, perhaps, yet there’s no denying the appeal of his music. There’s a down-home, down-to-earth, real-life feel to Watson’s songs. These are not written by some suits sitting in an air-conditioned room in Nashville, but rather a man living on the road, going to real places with real people and real situations. He’ll amble into the Valley this week for a performance at the Rhythm Room, 1019 East Indian School Road, at 8 p.m. on Wednesday, November 17. Admission is $20 in advance, $24 at the door. Glenn BurnSilver

The Black Angels at Crescent Ballroom

If you're looking for someone to credit for the psych-rock renaissance, it might be Alex Maas. As the longtime vocalist of The Black Angels, Maas has taken audiences on cosmic sonic journeys since 2004. Back in those days, Maas was performing around Austin, Texas (now known as the world's biggest psych-rock hotbed) in folk bands when he got a call from childhood friend Christian Bland about joining forces. They decided to take their sound in a trippier direction and were in heaven when they discovered no other band had staked a claim to the name "The Black Angels.” And the rest, as they say, is music history. Beyond creating a sound that harked back to Syd Barrett-era Pink Floyd, the band put out four critically beloved albums, helped popularize the psych-rock genre, and give nascent rock ‘n’ roll kids an excuse to amp up the reverb and get trippy with their tunes.  Catch them live on Wednesday, November 17, at Crescent Ballroom, 308 North Second Avenue. L.A. Witch opens the 8 p.m. gig. Tickets are $27.50. David Rolland

Nita Strauss at The Rebel Lounge

Fans of Alice Cooper and fierce female rockers are familiar with Nita Strauss. The 34-year-old guitarist and former member of tribute band The Iron Maidens has been shredding axes in the legendary shock-rocker’s band since 2014 and has gotten the spotlight in recent years for her enormous talents. No less a source than Guitar World magazine has listed Strauss as one of its “10 Female Guitar Players You Should Know” in 2018. That same year, the WWE tapped her to perform at WrestleMania and released her solo debut album Controlled Chaos to critical acclaim. Strauss is scheduled to take the stage at The Rebel Lounge, 2303 East Indian School Road, on Wednesday, November 17. CO-OP, the local metal band fronted by Dash Cooper, and Black Satellite share the bill. The show is at 8 p.m. and tickets are $22. Benjamin Leatherman
click to enlarge

COIN at The Van Buren

In 2012, indie-pop band COIN started playing shows around their hometown of Nashville, quickly accumulating fans in the process, later releasing two EPs, Saturdays and 1992. Despite the obvious talent on display with these releases, it wasn't until 2015 that the eyes of the national music scene fell upon the still-young quartet with their single "Run," a blistering three-and-a-half-minute pop-rock gem that induces involuntary head-bopping and energetic nostalgia. Swirling synth lines and memorable sing-along choruses supported by tight musicianship became COIN's M.O. The summer 2015 release of the band's self-titled debut full-length capitalized on this success, drawing positive reviews from national music outlets like Billboard. Since then, COIN's success has only grown as they’ve released two more LPs: 2017’s How Will You Know If You Never Try (which ranked high on the charts and featured the hit single “Talk Too Much”) and 2020’s Dreamland. Their sound has also gone in new directions, including a wider inclusion of synthesizer, a slightly more new-wave song structure, more powerful and honest lyrical ideas. They'll be in concert on Wednesday, November 17, at The Van Buren, 401 West Van Buren Street. Valley opens the 8 p.m. show. Tickets are sold out but can be found on the secondary market. John Nicholl

METZ and Preoccupations at Crescent Ballroom

Want to mosh? Let’s mosh. The Canadian punk-rock act METZ thrives in chaos, its shows a rowdy concoction of aggressive percussion and guitar-heavy angst. They’ll be joined at this show by fellow Canadians Preoccupations, whose post-punk sound — a bit of New Order, a little ’70s art-rock — is mellow by comparison. Their show on Thursday, November 18, at Crescent Ballroom, 308 North Second Avenue starts at 8 p.m. with an opening set by Facs. Tickets are $20 before fees. Gannon Hanevold

Sure, Skream could have taken an alias. Perhaps when he wanted to spin techno, he could go by Whisper or under DJ Euphoria for his house endeavors. But the U.K. DJ/producer's dubstep legacy is not preserved in amber for archaeologists to dig up millennia from now. In the early 2010s, anyone in search of dubstep's signature whomps and teeth-shattering drops had juggernauts like Skrillex and Excision to provide relief. But Skream hit differently. His U.K. dubstep and garage sounds were less cataclysmic — more gritty and dystopian. It was head-bobbing, not fist-pumping. Today, Skream is still Skream, but he grew more tentacles during his 24 years on the scene, dominating the techno, house, and disco sounds. He’ll soar through the soundscapes during his headlining set at Sunbar, 24 West Fifth Street in Tempe, on Thursday, November 18. Anatta and Jeff O'Neal open the evening starting at 8 p.m. Admission is $26. Grant Albert


BOAN at The Rebel Lounge

Austin, Texas-born electronic act BOAN may have only a single LP in their discography, 2015’s Mentiras, but the duo of Mariana Saldana and Jose Cota have earned plenty of love from listeners, bloggers, and critics alike. Both members utilize drum machines and both digital and analog synthesizers and drum machines to create their lush and moody brand of dark synthwave/synthpop tracks, which are adorned with Saldana’s vocals. BOAN, which emerged from the same scene that birthed the retro synth explosion of the late 2010s, is scheduled to perform at The Rebel Lounge, 2303 East Indian School Road, on Thursday, November 18. Body of Light and Secret Attractions will provide support. Doors are at 7 p.m. and tickets are $15. Benjamin Leatherman
KEEP PHOENIX NEW TIMES FREE... Since we started Phoenix New Times, it has been defined as the free, independent voice of Phoenix, and we'd like to keep it that way. With local media under siege, it's more important than ever for us to rally support behind funding our local journalism. You can help by participating in our "I Support" program, allowing us to keep offering readers access to our incisive coverage of local news, food and culture with no paywalls.
Make a one-time donation today for as little as $1.