Tinashe is scheduled to perform on Thursday, October 14, at The Van Buren. Marcus Cooper
click to enlarge 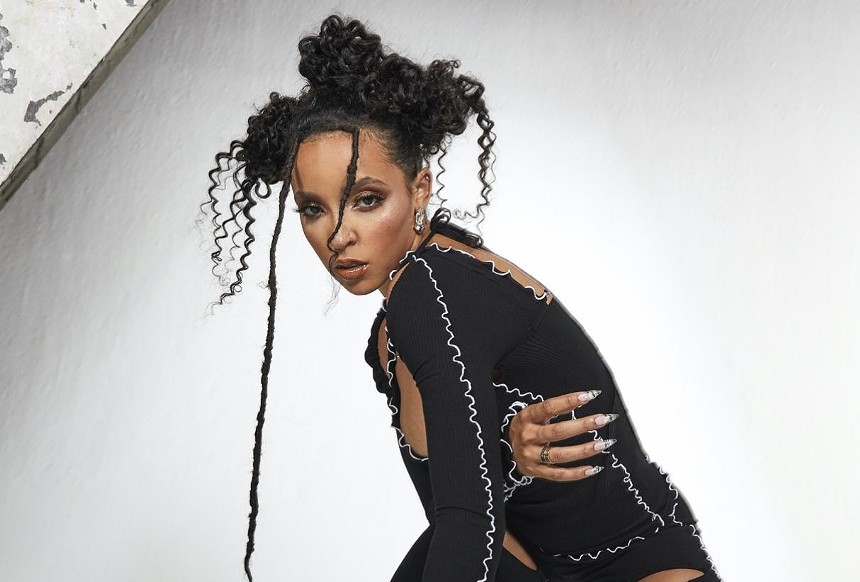 Tinashe is scheduled to perform on Thursday, October 14, at The Van Buren.
Marcus Cooper
This week’s concert offerings around metro Phoenix are nothing if not varied. In addition to a handful of high-profile reggae-rock bands (including 311 and The Expendables), there will be performances by alt-R&B act Chase Atlantic, indie-pop project Bleachers, punk icons Rancid and Dropkick Murphys, hip-hop legends Bone Thugs-N-Harmony, and industrial rock group Combichrist happening from Monday, October 11, to Thursday, October 14, at local music venues.

Plus, R&B/soul star Tinashe will visit The Van Buren in downtown Phoenix while this year’s Country Thunder Arizona music festival makes its long-awaited return on Thursday down at Florence’s Canyon Moon Ranch.

Read on for more details about these shows or music events or check out Phoenix New Times' online concert calendar. Keep in mind, though, that the Delta variant of COVID-19 is a growing danger right now and multiple local venues have started requiring proof of vaccinations or a recent negative test result to attend shows. More info can be found on the ticketing sites for each gig.

Bleachers at The Van Buren

While touring with Fun – the rock outfit that dominated the airwaves in the early 2010s with “We Are Young” and “Some Nights” – multi-instrumentalist Jack Antonoff began writing music for a solo indie-pop project. Under the stage name Bleachers, Antonoff released his debut album to critical acclaim in 2014. Seven years later, the New Jersey native will bring his tour in support of his third record, Take The Sadness Out Of Saturday Night, to The Van Buren, 401 West Van Buren Street, on Monday, October 11. Bedroom pop singer-songwriter Claud opens the 8 p.m. show. Tickets are $37 to $40. Matthew Keever 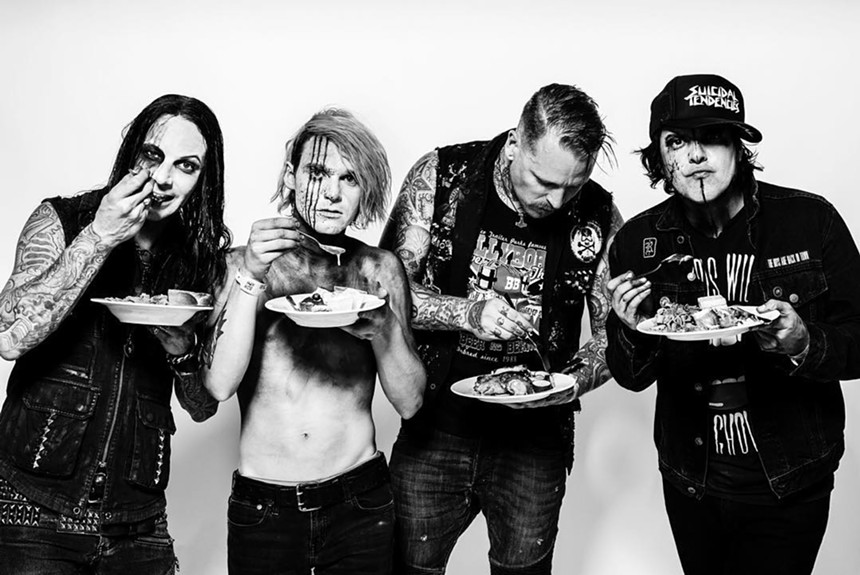 As founder of the iconic futurepop act Icon of Coil, Norwegian-born musician Andy LaPlegua showed an early penchant for the darker, harder sounds of the industrial music fringe. However, it was with his current outfit, Combichrist, that he fully realized his caustic musical dreams.


Unapologetically eardrum-splitting, brutal, and even vulgar, the group represents the apotheosis of aggrotech, a subgenre that sounds exactly like its name. At the core of Combichrist, songs are danceable beats that lock into a robotic, usually high-BPM groove. It's what keeps the common thread among songs that, above all that, gleefully push both sonic and content boundaries. For a clue, just check out the title of the band's most recent albums, including 2016's This Is Where Death Begins and 2019’s One Fire. Catch them at Pub Rock Live, 8005 East Roosevelt Street in Scottsdale, on Monday, October 11. Heartsick and Reign of Z provide support and tickets are $30 for the 7:30 p.m. gig. Arielle Castillo


The Expendables at Marquee Theatre

Based on the big crowds you’ll typically find at most reggae-rock shows over the last decade, it's safe to say that there is a surfer-stoner party just waiting to break out at all times. Invite one of the fine descendants of Sublime, and let's rage. Although the Expendables hail from further up the California coast than most '90s third wave ska bands, the guys carry on the same spirit. The sound leans heavier on Upsetters-style reggae grooves and lets up on Operation Ivy's punk energy. It's at once soothing and uplifting — perfect jams for the beach or the after-party. Their current tour comes to Marquee Theatre, 730 North Mill Avenue in Tempe, on Monday, October 11. Along for the tour are reggae-rock/punk act Ballyhoo! and SoCal surf/ska hybrid Tunnel Vision. The show starts at 5:15 p.m. and tickets are $20 for general admission and $30 to $40 for the balcony. Travis Newbill 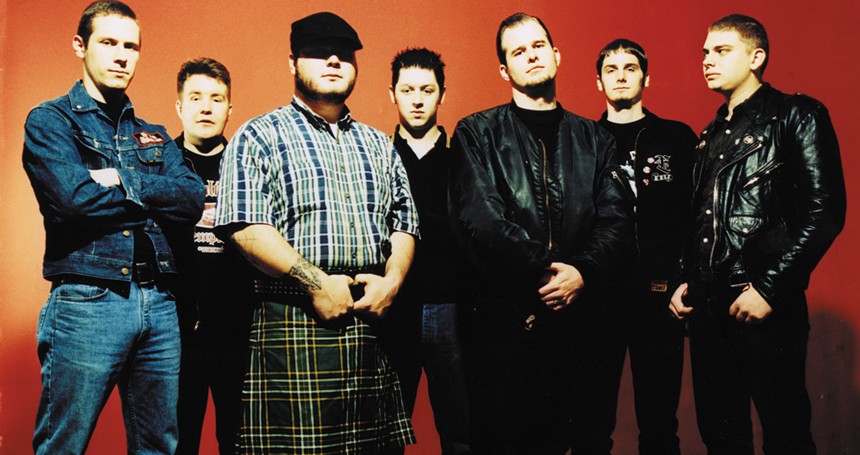 When it comes to street punk, there really are no bigger names than Boston's Dropkick Murphys and Berkeley's Rancid. The Boston to Berkeley II tour finds the former Hellcat records labelmates together again after their wildly successful 2017 co-headlining tour. Dropkick Murphys' Celtic-punk and Rancid's ska-punk influences would make for somewhat of an odd pairing had the two bands not come up making the same festival rounds and playing to the same audiences for decades. While the 2017 tour had both bands promoting a new release, Rancid has not released a follow-up since but has been working on one in the midst of bandleader Tim Armstrong's countless other projects. Dropkick Murphys released their 10th studio album, Turn Up That Dial, this year and have already put out seven singles in support of the album. If seeing these two bands together again wasn't enough, Los Angeles punk rock band The Bronx opens the show at Mesa Amphitheatre, 263 North Center Street, on Tuesday, October 12, which begins at 5:45 p.m. Tickets are $50. David Fletcher

Chase Atlantic at The Van Buren

Feeling moody? Head to The Van Buren, 401 West Van Buren Street, on Wednesday, October 13, to catch Australian trio Chase Atlantic slinging dark and glam lyrics to anthemic, emotional alt-R&B. Their sound is very much like Post Malone but with a little more pop punch. That's probably because two of its members, Christian Anthony and lead singer Mitchel Cave, were in What About Tonight, a boy band created for an audition on The X Factor Australia. Mitchel Cave's angelic voice contrasts a bit with their beach-bum, scumbro style, but that's what the kids want these days, so that's what Chase Atlantic is going to give them. Niko Rubio opens the 8 p.m. show. Tickets are $28 to $33. Liz Tracy 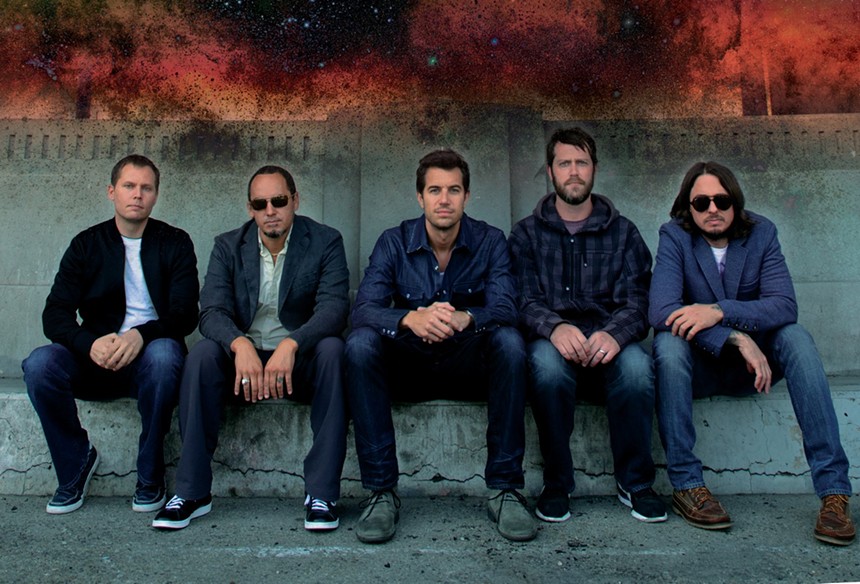 Like 'em or hate 'em, 311 have definitely made their mark on the music world.
Marcello Ambriz

Is there a less likely location for reggae-rap-rock to emerge from than Omaha, Nebraska? That’s the birthplace of 311, the band whose genre slurry produced a string of hits on alternative rock radio in the late ’90s and early ’00s. But the band’s career stretches back to the early ’90s, when 311 moved to Los Angeles and released its debut album, Music, in 1993. That first album was Red Hot Chili Peppers-esque in terms of riffs and vocal style, but there were hints of the sound that would propel their better-known songs to the top of the charts later in the decade. The group’s breakout release didn’t come until its self-titled 1995 album, which would eventually go platinum three times on the strength of singles “All Mixed Up,” “Down,” and “Don’t Stay Home.” Expect to hear all three songs (plus a slew of more recent material) when 311 comes to Ak-Chin Pavilion, 2121 North 83rd Avenue, on Wednesday, October 13, with openers Iration and Iya Terra. The concert starts at 6:30 p.m. and tickets are $25 to $89.50. David Accomazzo 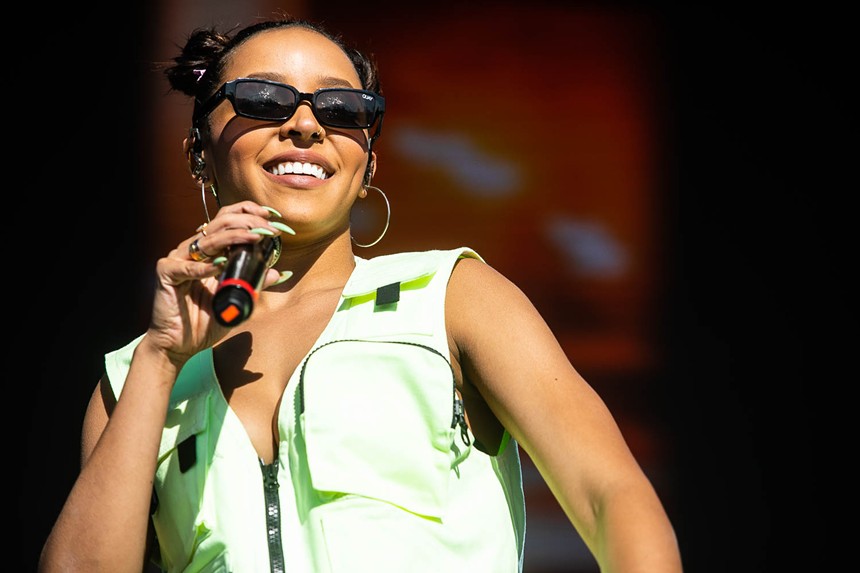 Tinashe during a 2019 concert in the Valley.
Jim Louvau

Tinashe at The Van Buren

It seems like Tinashe has been the "next big thing" for years. The quintuple threat — singer, actress, dancer, songwriter, and producer — had minor roles in films and TV shows before pursuing singing. A failed stint in the girl group the Stunners led Tinashe to take greater creative control of her music, described as R&B-based pop, on some buzzed-about mixtapes. Her debut solo album, Aquarius, yielded the sleeper hit “2 On,” featuring Schoolboy Q. The song was big enough to get the remix treatment from Drake, who bumped Q’s feature from the track. Follow-up singles fizzled out, but Tinashe’s hustle game was recognized by pop's reigning princess, Britney Spears, on their cheeky collaboration “Slumber Party.” The two went stiletto-to-stiletto in the song’s racy music video, which nabbed more than 97 million views on YouTube. Tinashe has released four hit albums since, including this year’s 333. Her current tour, which features pop artist Rei Ami, is due at The Van Buren, 401 West Van Buren Street, on Thursday, October 14. The concert begins at 8 p.m. and tickets are $25 to $30. Celia Almeida

After multiple postponements over the past two years due to the pandemic, the popular Country Thunder Arizona music festival will make its return on Thursday, October 14, at Canyon Moon Ranch, 20585 East Water Way in Florence. Kicking off the four-day event will be recording artists Mitchell Tenpenny, Filmore, Nolan Sotillo, and Meghan Patrick, followed by a headlining set by country superstar Dustin Lynch. Gates open at 1 p.m. and performances begin at 3:30 p.m. Four-day general admission tickets are $245. Benjamin Leatherman 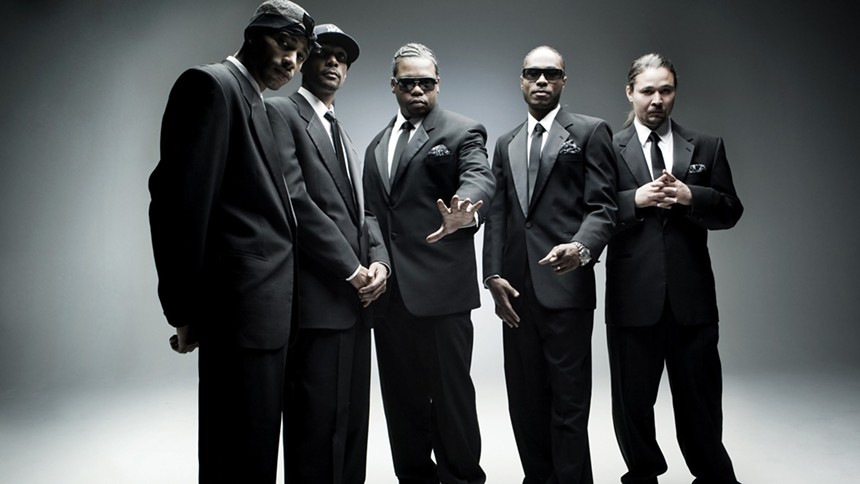 Back in the early '90s, when the Cleveland natives of Bone Thugs-N-Harmony were first starting out, they performed over the phone for N.W.A.'s Eazy-E who was feeling them out for his Ruthless Records label. Rapper Krayzie Bone told Thrasher Magazine that Eazy put them on speaker so everyone could listen to them. The people in the room hadn't heard anything like it before — no one had. The group — originally consisting of members Bizzy Bone, Layzie Bone, Krayzie Bone, Wish Bone, and Flesh-N-Bone — had a crazy original sound that included majestic, melodic harmonies (hence their name). When “Thuggish Ruggish Bone” came out in 1993 and "Tha Crossroads" was released in 1996, Bone Thugs took the world by storm, winning a Grammy for the latter. Catch them, one of the best hip-hop acts of all time, at Tempe’s Marquee Theatre, 730 North Mill Avenue, on Thursday, October 14. Maniacal Militants, Stoner Jordan, and Jahlos and the Rebels open the 7:30 p.m. concert. General admission is $20 and balcony access is $57 to $77. Liz Tracy
KEEP PHOENIX NEW TIMES FREE... Since we started Phoenix New Times, it has been defined as the free, independent voice of Phoenix, and we'd like to keep it that way. With local media under siege, it's more important than ever for us to rally support behind funding our local journalism. You can help by participating in our "I Support" program, allowing us to keep offering readers access to our incisive coverage of local news, food and culture with no paywalls.
Make a one-time donation today for as little as $1.