Mavis Staples is scheduled to perform on Tuesday, September 14, at Scottsdale Center for the Arts. Chris Strong
Up for seeing a concert this week? There are plenty of notable weeknight shows happening in metro Phoenix from Monday, September 13, to Thursday, September 16, to chose from. Options include R&B/gospel queen Mavis Staples, nu-metal kings Korn, and pop-rap singer Jake Miller, blues guitarist Tab Benoit, and indie-folk act City and Colour.

And that’s just on Monday and Tuesday.

Details about each of these events can be found below. For even more live music happening around the Valley, check out Phoenix New Times' online concert calendar. Keep in mind, though, that the Delta variant of COVID-19 is a growing danger right now and venues will be crowded with people at many events. If you’re going to attend, we encourage you to take precautions like wearing masks or maintaining social distancing.

City and Colour at Orpheum Theatre

Singer-songwriter Dallas Green sought to “siphon serenity from stress” on his sixth full-length studio album called A Pill for Loneliness, and now you can hear him perform its 11 tracks under the name City and Colour, a moniker that references the city and color in his given name. He’ll be performing at the Orpheum Theatre, 203 West Adams Street, at 8 p.m. on Monday, September 13. The artist promises to bring the balance between eloquence and energy during this, one of several shows he’s performing across the country in small, intimate venues. Tickets start at $41, and patrons need to show either proof of COVID-19 vaccination or a negative COVID-19 test result from 72 hours prior to the show. Lynn Trimble 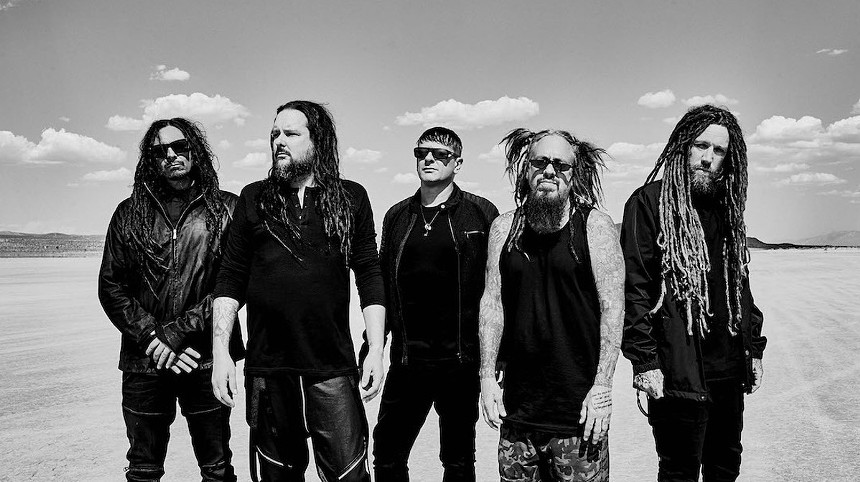 Korn returns to the Valley in September.
Jimmy Fontaine

Korn and Staind at Ak-Chin Pavilion

It’s been a while since fans have been able to catch the nu-metal pioneers of Korn on stage, and in the meantime, they have been placated only by the band’s last studio album, The Nothing, which dropped in late 2019. Frontman Jonathan Davis has set tongues wagging in recent weeks, announcing that the band has finished writing its follow-up. Joining Korn on tour are fellow nu-metal band Staind and openers Fire From the Gods. The tour comes to Ak-Chin Pavilion, 2121 North 83rd Avenue, on Monday, September 13. Tickets are $39.50 to $89.50 for the 6:30 p.m. concert. Olivia McAuley

Jake Miller at The Nile Theatre

With his sweetheart smile and bad-boy biceps, Jake Miller looks like the pop star record labels could only dream of sculpting. But he has more than good looks and catchy hooks: He also has a backbone. Originally a rapper from Weston, Florida, Miller etched his name onto the Billboard charts by the age of 21 with his single "First Flight Home." Three years later, he lost what promised to be his golden ticket to stardom: his deal with Warner Bros. Records.


The label canceled his tour and dropped him in 2017 — in the same week he parted ways with his longtime girlfriend since the age of 15. Heartbroken and lost, Miller had every excuse to give up. But Miller is not one to quit. Instead, he rolled out of bed and banged out his frustrations on the keyboard standing by his night table. Soon, his heartbreak formed the LP 2:00am in LA, which he released as an independent artist, just as he had launched his career. In 2018, Miller signed a deal with RED Music and released two more albums, 2018’s Silver Lining and this year’s Silver Lining II. He’s currently touring in support of the latter album and is scheduled to perform at 7:30 p.m. on Tuesday, September 14, at The Nile Theater, 105 West Main Street in Mesa. Tickets are $22.50. Luisa Andonie

Mavis Staples at Scottsdale Center for the Arts

Mavis Staples' indelible voice helped soundtracked the Civil Rights Movement as a member of the Staple Singers. She turned 82 years old this past July, which is hard to believe given her robust touring schedule. But Staples says that six decades after she gained national prominence with her family band, she's more resolute than ever to continue spreading her message of "love and light and all of the good news." She's outlived all of the members of her musical family and many of her best-known collaborators, including Prince and the Band's Levon Helm. Now, she's singing for them too. "I think of that often," Mavis told our sister publication Miami New Times in 2019. "When I lost my last sister, I said, Well, I'm the only one left here. I'm the only one still here. So I must be the messenger." Catch her in concert at 7:30 p.m. on Tuesday, September 14, at Scottsdale Center for the Performing Arts, 7380 East Second Street. Tickets are $45 to $75. Celia Almeida


Jukebox the Ghost at Crescent Ballroom

Philly three-piece Jukebox the Ghost's wry whimsical alarm is just the balm to soothe your soul in troubled times. Whether surviving imminent manmade apocalypse or entertaining the devil while God explains "how all the shit's going to be when I blow your little planet into smithereens," the quirky lighthearted, literate lyricism of their music suggests They Might Be Giants and Ben Folds Five. Classically trained pianist Ben Thornewill keys the dynamism of these catchy, theatrical numbers, which bridge the distance between baroque and indie pop. Thornewill's adenoidal vocals tumble in torrents like the tin roof tympani of a thunderstorm, coursing with a fey cabaret bounce. Jukebox the Ghost is scheduled to perform at Crescent Ballroom, 308 North Second Avenue, on Tuesday, September 14. Psych-rock band Fleece, who rose to fame from their 2015 viral video parodying Alt-J, open the evening at 8 p.m. Tickets are $22. Chris Parker 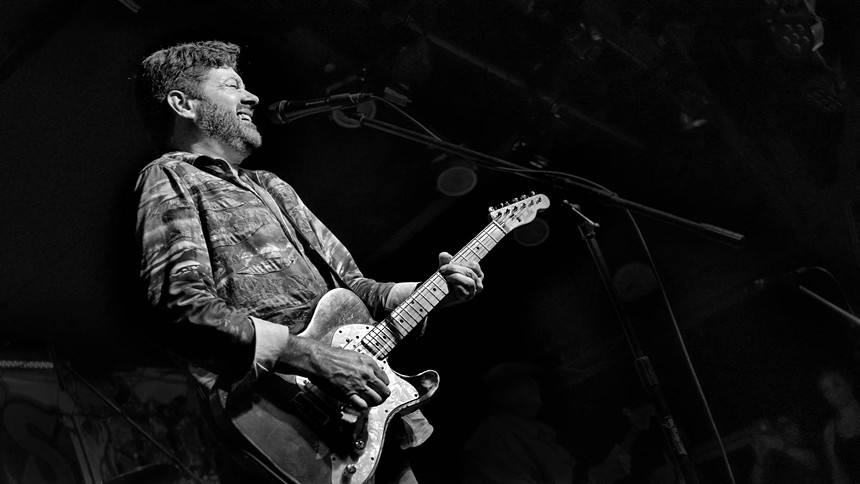 Tab Benoit at The Rhythm Room

Guitarist Tab Benoit grew up in Baton Rouge and graduated from high school in New Orleans, and his style of Delta-blues-meets-roots is as authentic to the city’s character as his thick Cajun patois. He’s the type of guitar player that can start a party by himself, with a flashy, bluesy, percussive style of playing that practically demands audience members get out of their seats and start moving. As a result, through almost 20 albums spanning more than two decades, he’s one of the city’s most important music exports of note. The Rhythm Room is the perfect place to get down to Benoit’s offerings — a small and powerful room that will allow the crowd to get up close and personal with the guitarist. His performances at the legendary local venue on Tuesday, September 14, and Wednesday, September 15, start at 8 p.m. each night and tickets are $40. Blues musician and accordion player “Jumpin” Johnny Sansone opens both gigs. David Accomazzo

Through the Roots at Last Exit Live

San Diego quintet Through the Roots boasts what is probably the quintessential California sound: breezy, beachy, and freely crossing through any number of laid-back genres. Unsurprisingly, the group's sound is mostly grounded in reggae, but it often comes blended with rock, pop, hip-hop, and whatever else melodically fits into the groove. Like similarly-minded bands such as Passafire, Rebelution, and company, Through the Roots has largely concentrated its efforts on touring constantly. As such, the band has remained independent while building up a following big enough to bring out the crowds to places like Last Exit Live, 717 South Central Avenue, where the foursome performs at 7 p.m. on Wednesday, September 15. Tickets are $20 in advance and $25 at the door. Arielle Castillo

On Wednesday, September 15, Michael Hadreas (better known as indie-pop artist Perfume Genius) will finally bring Perfume Genius back to the Valley after postponing shows previously scheduled for 2020. He's scheduled to perform at Crescent Ballroom, 308 North Second Avenue, and it should be a memorable gig for a performer who's finally back on the road after all the pandemic shutdowns, which he capped off with what he describes as a "deathbed" take on the Gloria Gaynor classic "I Will Survive."

It's a song as upbeat and defiant as they come. But when Hadreas sings it, he pumps up the melancholy. "I guess I'm a pro at taking things and reducing it and then making it, I guess, what people consider sad," he admits. And that's the right tack right now: The era in which he recorded the song is one of mass tragedy, with a pandemic forcing millions into lockdown and killing hundreds of thousands in the United States alone.

While little about Perfume Genius's music could be described as chipper, it's all 100 percent from the heart. Hadreas sticks to his vision, and the only times he's had big creative regrets were when he strayed from it. That vision will be on full display at Crescent Ballroom this week. The show starts at 8 p.m. and Hand Habits opens. Tickets are $27. Kyle Harris

Kevin Gates’ debut album, named for his daughter Islah, received critical acclaim for its melodies and emotional depth. It launched the Louisiana native into the mainstream and was certified double platinum by the RIAA the same year it was released. Five years on, Gates remains a prolific wordsmith whose inimitable voice entrances listeners who are eagerly awaiting his third record. See him live at Tempe’s Marquee Theatre, 730 North Mill Avenue, on Thursday, September 16. DDG and Gang51E June open the 7 p.m. show. It's officially sold out but you can still purchase tickets through resale services. Matthew Keever 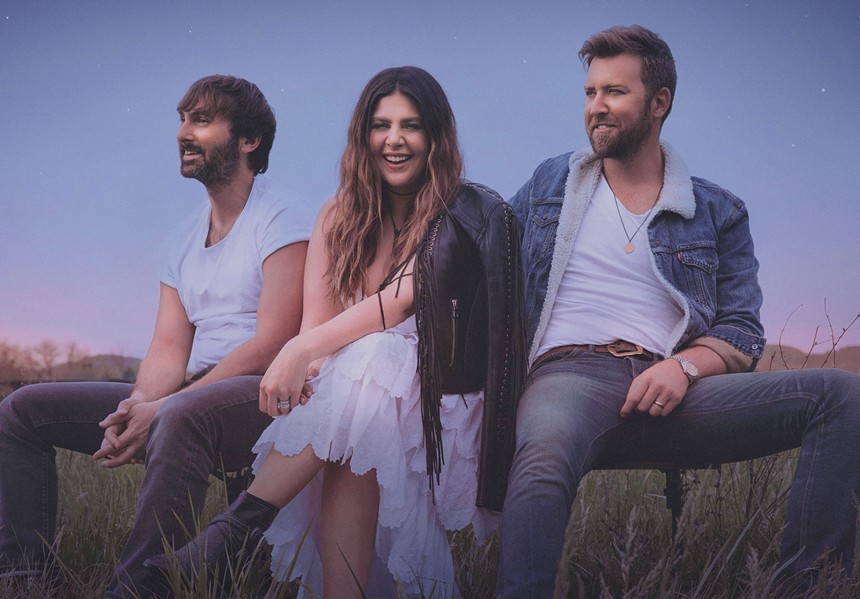 Lady A at Ak-Chin Pavilion

There's nothing wrong with Lady A. Their über-wholesome brand of country music is far, far removed from the honky-tonks, redoubts of violence, heartache, and sin. It's so positive it barely seems even possible. They're very, very popular, as are their uptempo numbers like "Lookin' for a Good Time," "Our Kinda Love," and "Perfect Day.” Those songs alone are replete with images of skipping rocks, afternoons at the lake, nights by a campfire, the open highway, and even what sounds like a one-night stand in the making (risqué!). There's lots of action going on, but very little drama and zero conflict.


On the other hand, their best songs, such as bouncy single "Downtown" and monster crossover ballad "Need You Now," at least take place inside something approaching the real world: the singer scolding her partner to take her out once in a while (damnit), and then of course in the throes of that late-night phone call she knows she will regret in the morning, but just doesn't care. That's good stuff. Lady A comes to Ak-Chin Pavilion on Thursday, September 16. Carly Pearce, Niko Moon, and Tenille Arts open the 7 p.m. concert. Tickets are $40 to $125. Chris Gray
KEEP PHOENIX NEW TIMES FREE... Since we started Phoenix New Times, it has been defined as the free, independent voice of Phoenix, and we'd like to keep it that way. With local media under siege, it's more important than ever for us to rally support behind funding our local journalism. You can help by participating in our "I Support" program, allowing us to keep offering readers access to our incisive coverage of local news, food and culture with no paywalls.
Make a one-time donation today for as little as $1.