Bone Thugs-N-Harmony are scheduled to perform on Friday, July 8, at Marquee Theatre in Tempe. Courtesy of Luckyman Concerts
Watchu got planned this weekend? There will be concerts and club nights at venues across the Valley, including shows headlined by rap legends Bone Thugs-N-Harmony, hip-hop duo Atmosphere, and Tucson-based one-man band/desert oddity Bob Log III. Crescent Ballroom will also host a benefit featuring female-fronted bands to spread awareness of reproductive rights and raise funds for the cause.

Details about each of these gigs can be found below. And for even more music events happening in the Valley from Friday, July 8, to Sunday, July 10, check out Phoenix New Times' online concert calendar.

Friday, July 8
Sunbar, 24 West Fifth Street, Tempe
If you prefer your bass music loud, grimy, and incredibly fast-paced, Delta Heavy’s gig on Friday night at Sunbar should be on your to-do list. The UK-based DJ/producer duo of Ben Hall and Simon James have created tracks laced with drum ‘n’ bass and dubstep since 2009. This weekend, they’ll get the subs quaking and foundations shaking at Tempe’s Sunbar. Bensley, Lavander, and Dirty Mind Tricks open the evening. 9 p.m., $24 via relentlessbeats.com. Benjamin Leatherman

Friday, July 8
Chopper John's, 2547 East Indian School Road
At Bob Log III’s show, he probably won’t get shot out of a cannon. Rest assured, though, if the opportunity arises, he’ll be dressed for it. The one-man band’s ensemble is completed by a helmet that is rigged to include a telephone receiver microphone. While that headgear is certainly a focal point, once Log digs into his blues-punk tunes, your eyes get mesmerized by all the other goings-on. There’s the slide guitar work with some intricate finger picking, the drum section — operated by each of Log’s feet hitting corresponding pedals, and the throaty vocals that drip with sass and twang. Tunes like “Shake a Little, Wiggle it and Jiggle it Too,” “Boob Scotch,” and “Manipulate Your Figments,” throw this blues-tinged ’50s-style rock 'n' roll dance party into action. With The Hardways, 8 p.m., $10. Amy Young

Friday, July 8
Marquee Theatre, 730 North Mill Avenue, Tempe
What a bargain: You'll get five Bones for the price of one when Bizzy Bone, Wish Bone, Layzie Bone, Krayzie Bone, and Flesh-n-Bone take the stage in Tempe this weekend. Though the legendary hip-hop collective hasn't released an album since 2017's New Waves, it has a deep enough catalog to fill a show at the Marquee with beloved tracks dating back to the early 1990s. Maniacal Militants, Caine Oth, and Unconventional Kings are also on the bill. 7:30 p.m., $42-$70 via ticketweb.com. Jennifer Goldberg

Friday, July 8
The Van Buren, 401 West Van Buren Street
Yeah, the latest season of Stranger Things may have whiffed the ending, but don’t let it distract from the fact its soundtrack absolutely slaps. Besides introducing Kate Bush’s 1986 song “Running Up That Hill” to a new generation of music fans, it was loaded up with such throwback bangers as Falco's “Rock Me Amadeus,” Baltimora's "Tarzan Boy," and (of course) Metallica’s “Master of Puppets.” You’re likely to hear these classic cuts (or other songs by the same artists) being spun by DJs during The Van Buren’s Stranger Things ’80s Night on Friday. There will also be an outfit contest, a photo booth, and giveaways. 8:30 p.m., $18 via ticketweb.com. Benjamin Leatherman 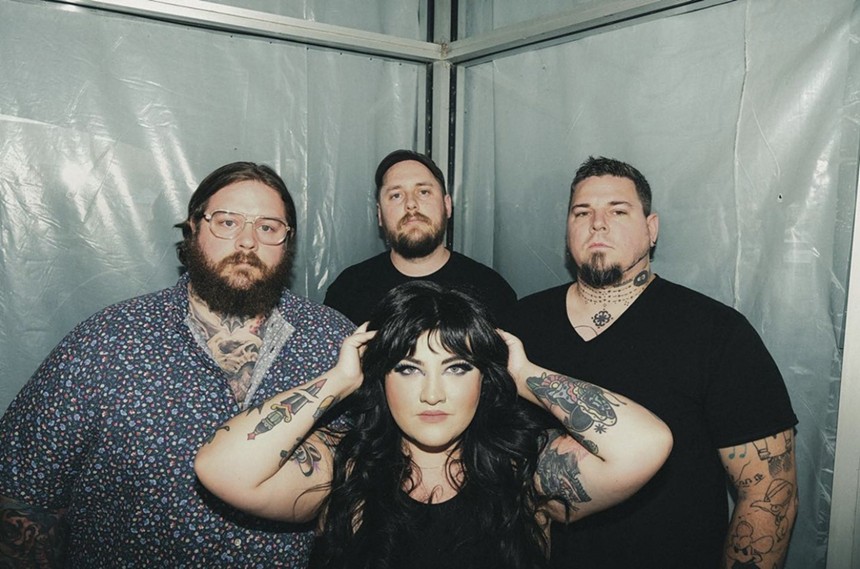 Smash the Patriarchy: A Benefit for Reproductive Rights

Saturday, July 9
Crescent Ballroom, 308 North Second Avenue
Local musician Echo Breen is one of many people incensed by the Supreme Court’s decision on June 24 to overturn Roe v. Wade, ending the constitutional right to abortion. The singer is turning anger into action with Smash the Patriarchy: A Benefit for Reproductive Rights on Saturday at Crescent Ballroom. Breen fronts the band Bite the Hand, who will take the stage that night to perform and raise funds for the Abortion Fund of Arizona, a direct service program of Pro-Choice Arizona that provides financial assistance to Arizona women in need of abortion care.

Her goal for the show, in addition to raising funds and awareness, is to provide a zone of support for people struggling with this dismantling of the right to choose. Bands joining the bill for the evening along with Breen’s group are Pleasure Cult, Wallace Hound, Veronica Everheart, and Lilac Cadillac. Breen notes that the roster features all female-fronted acts. The Abortion Fund of Arizona will be on hand and will spend time on stage, between bands, informing the crowd of who they are, what they do, and what services and resources they offer. 7 p.m., $10 via crescentphx.com. Amy Young

Slug and Ant of Atmosphere.
Rhymesayers

Sunday, July 10
Marquee Theatre, 730 North Mill Avenue, Tempe
Minneapolis-bred Atmosphere aptly fits into that "old-school" indie rap category. Since 1996, the duo has released 12 studio albums and 10 extended plays, touched base on some deep societal issues, and has kept a fanbase while consistently evolving; difficult to do during a time like the ’90s when musical consistency was everything. Atmosphere consists of rapper Slug (a.k.a. Sean Daley) and DJ/producer Ant (born Anthony Davis), and the latter has produced almost every record put out by the duo, including their most recent release, 2021’s WORD?. Atmosphere’s current tour with reggae-rock act Iration swings through the Valley this weekend with support from The Grouch and DJ Fresh. 5 p.m., $50-$70 via ticketweb.com. Lauren Wise Sunday, July 10
The Nash, 110 East Roosevelt Street
Francine Reed is an absolute treasure. Born into a family of musicians, which included her late sister (and fellow vocalist) Margo, Reed has spent a good portion of her life performing, dating back to her time singing gospel music in church while growing up in Illinois. From the mid-’70s onward, she’s been lighting up local stages and venues with her brassy voice and lively personality. Back in the day, you could find her at such famed-but-bygone Phoenix-area spots as Boojum Tree, Chuy’s, or Bombay Bicycle Club. And when she wasn’t thrilling locals with her talents, Reed was sharing stages with the likes of Miles Davis, Etta James, Stanley Jordan, and Smokey Robinson. 3 p.m., $14.80-$45 via thenash.org. Benjamin Leatherman
KEEP PHOENIX NEW TIMES FREE... Since we started Phoenix New Times, it has been defined as the free, independent voice of Phoenix, and we'd like to keep it that way. With local media under siege, it's more important than ever for us to rally support behind funding our local journalism. You can help by participating in our "I Support" program, allowing us to keep offering readers access to our incisive coverage of local news, food and culture with no paywalls.
Make a one-time donation today for as little as $1.