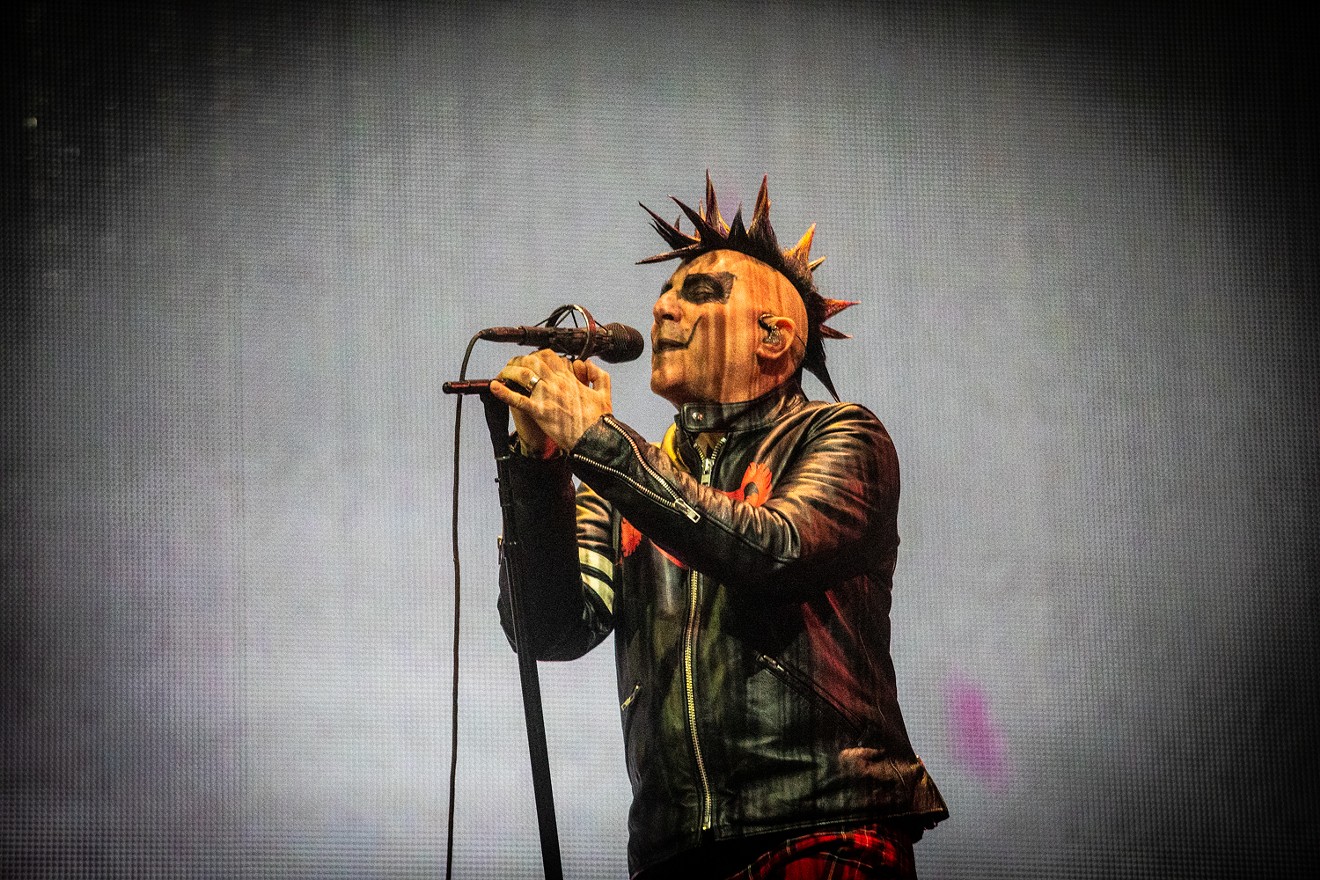 Tool is scheduled to perform on Friday, January 21, at Footprint Center. Jim Louvau
Got any plans this weekend? If you’re a fanatical supporter of all things Maynard James Keenan, we’re guessing you’re heading to downtown Phoenix on Friday night to see Tool at Footprint Center. Meanwhile, fans of local pop-punk stars The Maine will be celebrating the return of the 8123 Fest, punks will be crowding into Tempe’s Yucca Tap Room to see Guttermouth, and hip-hop heads will be catching Ludacris at Wild Horse Pass Hotel & Casino.

Other highlights of this weekend’s concert landscape include gigs by death metal band Khemmis, French band Paris Chansons, and more.

For more than three decades, Guttermouth has been putting out a consistent brand of relentlessly taunting and taut SoCal pop-punk. From a band with a name like Guttermouth, you get exactly what you expect: a tenable testament to truth in advertising in the form of lowbrow tunes, a seemingly exhaustive and endless catalog of songs with titles like "Pee In the Shower" and "Surfs Up Asshole," taken from nearly a dozen albums, including three live albums, issued on at least three prominent punk imprints (Nitro, Epitaph, and Volcom). Oh, and lest you worry, age hasn't made these dudes any less cantankerous. If you need further proof, they’ll take the stage at Yucca Tap Room, 29 West Southern Avenue in Tempe, on Friday, January 21. Chaser, Squared, and First Front open the 8 p.m. gig. Tom Murphy

Khemmis is touring in support of Deceiver, their latest album.
Jason Sinn

Members of Denver-based doom-metal band Khemmis find Deceiver, the band’s recently released fourth album, to be their most “dark and depressing” work yet. Those are bold words from purveyors of a genre with "doom" in the name — not that anyone should expect them to cover “Raindrops Keep Fallin’ on My Head” any time soon. The bandmembers wrote the six-track album, its first worldwide release with Nuclear Blast Records, during the COVID-19 pandemic. They found themselves pondering what the long shutdowns and quarantines meant for their personal and professional lives. While the band didn’t just give into the darkness, it does permeate the record, he notes. But in the end, it’s all about finding equilibrium between the two opposing forces. Hear Khemmis perform songs from Deceiver during their gig on Friday, January 21, at The Underground, 105 West Main Street in Mesa. Vile Creature and Grail will open the 7:30 p.m. show. Tickets are $18 to $22. John Bear

Hawaiian music legends Keola Beamer and Henry Kapono both started their careers in the ’70s. Beamer is best known for his slack-key guitar playing while Kapono rose to popularity as part of the duo Cecilio & Kapono. They’ll pay a visit to the Musical Instrument Museum, 4725 East Mayo Boulevard, for a performance on Friday, January 21. Beamer's wife, Moanalani, will be a special guest. The concert starts at 7 p.m. and tickets are $44.50 to $49.50. Westword Staff

The was the band's second stop to the Valley since the release of Fear Inoculum.
Jim Louvau

Arizona music legend Maynard James Keenan kept himself busy during the pandemic with a Puscifer album and a pair of live-streamed performance films. But it's his band Tool he'll be kicking off 2022 when the rockers take the stage at Footprint Center, 201 East Jefferson Street, on Friday, January 21. Tool hasn't released an album since 2019's Fear Inoculum, but you'll no doubt hear highlights from the band's 30-year catalog. The show is sold out, but tickets are available for big bucks on the secondary market. Jennifer Goldberg

Atlanta native Chris Bridges, better known as Ludacris, is not only a rapper but also an actor and entrepreneur. The 44-year-old hustler has appeared in more than two-dozen feature films, which means he has more movies on his resume than albums. He’s also made several TV appearances on shows ranging from Law & Order: SVU to Empire. He still makes music, too, although his most recent record, Ludaversal, may have come out more than six years ago. In recent years, Ludacris has released a number of singles, including 2020’s “Found You” (which featured Chance the Rapper) and last year’s “Butter.Atl.” He’s set to perform on Friday, January 21, at Wild Horse Pass Hotel & Casino, 5040 Wild Horse Pass Boulevard in Chandler. The concert is at 8 p.m. and tickets are $45-$85. Sara Button

A DJ's DJ and industry favorite, electronic dance music artist and producer Behrouz has played clubs from Los Angeles to Ibiza to Tokyo and is praised for his versatile repertoire of styles and genres, from progressive house to minimal techno. He’s also been a regular at Burning Man over the years, including performing on the famed Robot Heart bus, so it’s only fitting that his gig this weekend in the Valley will go down at Walter Where?House, 702 North 21st Avenue. The owners of the local art space and events venue are no strangers to the Playa and will provide a suitably colorful setting for Behrouz’s performance. Doors open at 9 p.m. and tickets are $18 in advance and $22 at the door. Sean Levisman and Benjamin Leatherman

If you've never heard of "cholo goth," it's a musical and aesthetic style created by San Diego electronic rock band Prayers that's a mix of Mexican-American influences, goth culture, synth, metal, and other influences. Get a primer on Saturday, January 22, at The Rebel Lounge, 2303 East Indian School Road, when Dave Parley of Prayers and Obzen Vanitas will perform DJ sets starting at 8 p.m. Admission to the 21-and-over event is $13. Benjamin Leatherman 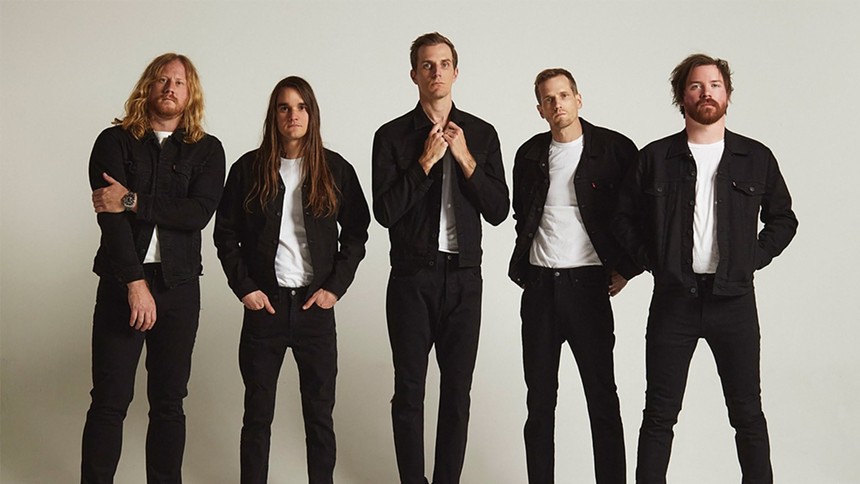 The Maine is celebrating both its 15th anniversary and the return of its 8123 Fest.
The Maine

To celebrate their 15th anniversary, The Maine is bringing pop-punk into their backyard, taking over downtown Phoenix to celebrate their fans, collaborators, and music. 8123 Fest will be held on Saturday, January 22, at Margaret T. Hance Park, 67 West Culver Street, with the lineup featuring 18 artists spread across two stages. Performers include State Champs, The Summer Set, 3OH!3, Tessa Violet, and This Wild Life. Beyond music, the weekend will also offer a curated bar, tattoo parlor, an 8123 pop-up shop, and after-parties (click here for the full schedule). The festival is named after The Maine’s “8123” brand, a set of numbers that has taken on sentimental value for the group’s most loyal fans (it comes from a parking garage in Tempe where the band spent plenty of nights as teenagers). The festival on Saturday is scheduled to start at 1:30 p.m. Tickets are $55. Gannon Hanevold

Paris Chansons play a variety of French hits, dating back to the 1930s, when songbirds like Edith Piaf walked the Earth, and into the modern era. They also touch on the work of other French pop greats like Serge Gainsbourg and the ye-ye singers of the ’60s, who took Phil Spector’s girl group music and gave it a Gallic twist. Although the band is dedicated to sharing French classics, they’re also committed to sharing these old standards in new ways. They’ll do so on Saturday, January 22, at the Musical Instrument Museum, 4725 East Mayo Boulevard. Their performance starts at 7 p.m. and tickets are $38.50 to $49.50. Ashley Naftule
KEEP PHOENIX NEW TIMES FREE... Since we started Phoenix New Times, it has been defined as the free, independent voice of Phoenix, and we'd like to keep it that way. With local media under siege, it's more important than ever for us to rally support behind funding our local journalism. You can help by participating in our "I Support" program, allowing us to keep offering readers access to our incisive coverage of local news, food and culture with no paywalls.
Make a one-time donation today for as little as $1.