Neko Case is scheduled to perform on Sunday, August 22, at The Van Buren. Ebru Yildiz
What’s on tap for the Valley’s concert scene this weekend? Plenty, if you’re a fan of murderfolk balladeer Amigo the Devil, blues artist Black Joe Lewis, or indie queen Neko Case. All three artists have gigs scheduled around metro Phoenix from Friday, August 20, to Sunday, August 22.

Other highlights of this weekend’s concert offerings include performances by The Mavericks, Gorgon City, and William Elliott Whitmore. Local metalheads will also pay tribute to the late Darrell “Dimebag” Abbott of Pantera fame and the electronic dance music series Ocotillo Open Air will make its return.

Details about each of these events can be found below. And for even more live music happening around the Valley, hit up Phoenix New Times' online concert calendar.

The Mavericks at Talking Stick Resort

In the pages of country-music history, perhaps only Charlie Rich has the Mavericks beaten for pure suaveness, and even then it's pretty damn close. The four-piece trumped many "hat acts" of the early and mid-'90s with a rich, practically unique hybrid of traditional country, '50s and '60s rock and roll (Roy Orbison especially), and a heavy Cuban accent befitting their Miami origins. After ending a ten-year hiatus with 2013's In Time, which can stand proudly alongside vintage albums such as What a Crying Shame and Music For All Occasions, the Mavericks continue to record, perform, and tour. They’re set to visit Talking Stick Resort, 9800 East Talking Stick Way in Scottsdale, on Friday, August 20, along with Los Lobos. The concert starts at 8 p.m. and tickets are $30 to $80. Chris Gray 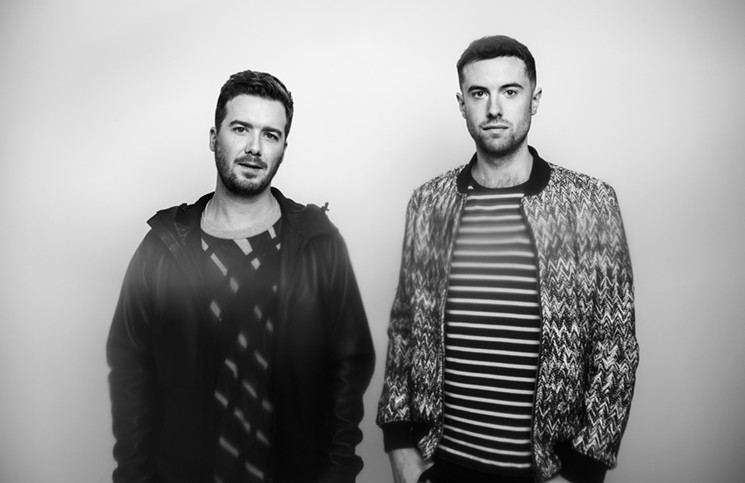 Before joining creative forces as Gorgon City, Kye Gibbon and Matt Robson-Scott were already celebrated DJ/producers in their own right. Going by Foamo and RackNRuin, respectively, the two came up as part of London's beloved Black Butter artist collective and label, which also spawned the likes of Rudimental and international chart-topping quartet Clean Bandit. Of course, the common musical denominator for Gibbon and Robson-Scott, like with most London-bred electronic dance music artists, is the UK bass that's in their DNA.


As with fellow British breakout stars Disclosure and Duke Dumont, it's classic styles (spanning jungle, drum 'n' bass, garage, grime, and dubstep) that most inform Gorgon City's four-on-the-floor house sound and smash songs like "Go All Night," "All Four Walls, "and "There For You.” The duo's tracks are slices of exuberant bass-infused dance-pop that steadfastly refuse to temper its gritty warehouse rave vibe in favor of overly polished production. Hear it for yourselves on Friday, August 20, at Sunbar, 24 West Fifth Street in Tempe. The beats start at 9 p.m. and Pax opens. Tickets are $38.50. Sean Levisman 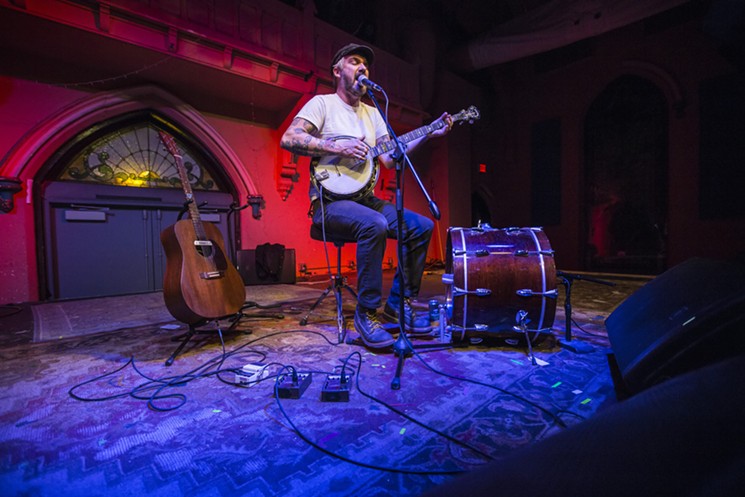 William Elliott Whitmore's songs are set in the fields of Iowa and on the banks of the Mississippi, but his guitar and banjo have traveled the globe, opening stages for the likes of the Pogues, Billy Bragg, Chris Cornell, and Social Distortion. On Friday, August 20, Whitmore brings his weary blues-folk to the The Rebel Lounge, 2303 East Indian School Road. The gruff and heartfelt singer's music brims with passion and honesty, and the close confines of the small room are a perfect setting to fully capture his charm. Walter Debarr and Jim Bachmann will open the 8 p.m. show. Admission is $15. Loren Green

Blues, funk, soul, country – why pick one when you could have them all? That’s the ethos behind Austin, Texas, native Black Joe Lewis, who has caught so many comparisons to so many different artists, it’s hard to list just a few (but we’ll try: James Brown, Howlin’ Wolf, The Gun Club, Sam Cooke, the Stax Records lineup, and so on). He’s like a compendium of American music history, smashing every great genre from the 20th century together in a guitar-laden smorgasbord on his various albums. You might learn something at his show on Saturday, August 21, at Valley Bar, 130 North Central Avenue. Ali A and the Agency open the 8 p.m. show. Tickets are $15. Douglas Markowitz

Danny Kiranos, better known as Amigo the Devil.
Visions of the Abyss

Amigo the Devil at The Nile Theater

Danny Kiranos, the musician who performs as Amigo the Devil, says he is an avid reader. He loves books but he’s interested in more than dust-covered tomes. He reads people, too and he’s interested in those whose chapters are filled with challenging and frightening moments. Amigo the Devil’s brand of music has been dubbed “murderfolk,” which sounds ominous and does shine an unwavering light at the darkness in the human heart. His catalog includes damning songs and murderous memoirs about serial killers about other bad men, including his latest album, Born Against. Kiranos will perform songs from that album and the rest of his discography on Saturday, August 21, at The Nile Theater, 105 West Main Street in Mesa. Tejon Street, Corner Thieves, and Stephanie Lambring are also on the lineup for the 7 p.m. show. Tickets are $17.50. Jesse Sendejas Jr.

It doesn't matter if you are a fan of Pantera or not – there's no denying that the late Darrell “Dimebag” Abbott was a natural genius on the guitar. His speedy fingers, twangy blues-meets-speed metal style, and rampaging riffs. There's no doubt that his talent would've progressed much further. That's why every year around the musician's August 20 birthday, heavy metal fans all over the U.S. organize Dime Fest. Here in the Valley, it’s taken place at hesher havens like the now-defunct Joe’s Grotto. This year’s event, which happens at 6 p.m. on Saturday, August 21, at The 44 Sports Grill & Nightlife, 4494 West Peoria Avenue in Glendale. Local bands like 101 Proof, Sectas, Whiskey Dogz, and Amaya pay tribute to Abbott with deep metal grooves, shred-tastic riffs, and powerful vocals. Admission is $10. Getcha pull! Lauren Wise 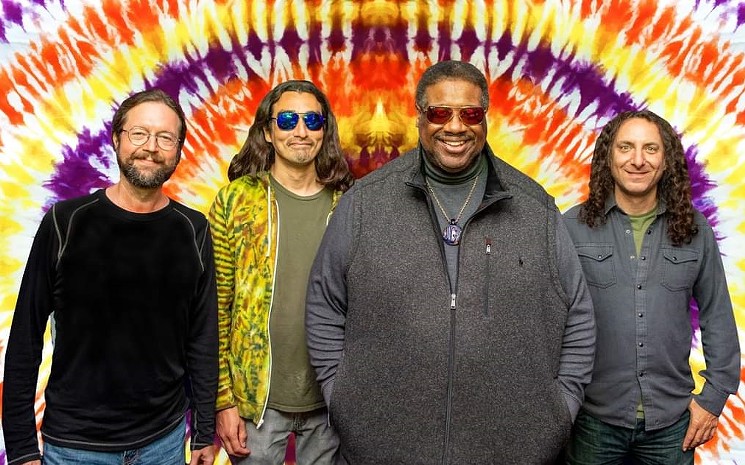 Melvin Seals wasn't in the Grateful Dead. His claim to fame is being the pianist and third longest-running member of JGB (a.k.a. the Jerry Garcia Band), which still tours even though its founder and namesake have been dead for going on three decades. But does that matter? If Six Degrees of Kevin Bacon and the psychoactive properties of the aforementioned Acapulco Gold have taught us anything, it's that we're all one cosmic being expressing itself through a myriad of individual but interconnected avatars. Plus, when Seals is ticklin' those ivories and setting a groovy vibe, it's hard not to feel that any minute Ken Kesey is gonna roll up in a psychedelic school bus and dump a cauldron of LSD on our heads. Seals and JGB are scheduled to perform on Saturday, August 21, at Tempe’s Marquee Theatre, 730 North Mill Avenue. The show starts at 8 p.m. and tickets are $30 to $60. Matt Preira

Neko Case at The Van Buren

Neko Case knows how to twist and turn a phrase to make her lyrics sparkle and crackle, conjuring tender, fading memories and gossamer dreams in listeners’ minds. A sonic storyteller for more than 20 years as a member of Canadian indie rockers The New Pornographers, Case’s work with the Pornographers, with her band (Her Boyfriends) and as a solo artist has firmly established her as indie-rock royalty. Catch her in concert on Sunday, August 22, at The Van Buren, 401 West Van Buren Street. The show starts at 9 p.m. and AC Newman opens. Tickets are $35 to $55. Daniel Rodriguez

The scene on the dance floor at Ocotillo Open Air Festival.
Benjamin Leatherman

Good news for fans of ongoing electronic dance music event Ocotillo Open Air: It’s set to return this weekend after a lengthy hiatus. Led by local DJ and promoter Sean Watson, the outdoor dance party series on the patio of Ocotillo Restaurant, 3243 North Third Street, largely features house music and will be headlined by French-born DJ/producer Sébastien Léger. Watson and Comfort Clo open. The party goes from 3 to 9 p.m. and tickets are $15 to $20. Benjamin Leatherman
KEEP PHOENIX NEW TIMES FREE... Since we started Phoenix New Times, it has been defined as the free, independent voice of Phoenix, and we'd like to keep it that way. With local media under siege, it's more important than ever for us to rally support behind funding our local journalism. You can help by participating in our "I Support" program, allowing us to keep offering readers access to our incisive coverage of local news, food and culture with no paywalls.
Make a one-time donation today for as little as $1.