Playboi Carti is scheduled to perform on Friday, November 5, at Mesa Amphitheatre. By villunderlondon/CC BY-ND 2.0, via Flickr
Phoenix is in for a busy weekend of live music and big concerts, including performances by country singer Charley Crockett, SoundCloud rap sensation Playboi Carti, R&B star Ginuwine, and rock legends Blue Öyster Cult and George Thorogood. And that’s just on Friday.

Read on for further details about each show or click over to Phoenix New Times' online concert calendar for more live music in the Valley this weekend. Keep in mind, though, most local venues now require proof of COVID-19 vaccinations or a recent negative test result to attend shows.

Borrowing his namesake from the American folk hero Davy Crockett — whom he cites as a distant relative — Charley Crockett kick-started his career by train-hopping across the country, performing wherever he could find a bar stool and a microphone. In recent years, the blues travelin' Texas native settled in Dallas, where he won a few awards and developed his catalog, which now boasts nine albums since 2015. Even open heart surgery in 2019 couldn't keep Crockett from performing and recording, as he’s been in the studio and out on the road in recent years. He’s touring behind his latest release, Music City USA, which dropped in September and has been lauded by Brooklyn Vegan and Rolling Stone alike. See him at Crescent Ballroom, 308 North Second Avenue, on Friday, November 5. Fellow country crooner Joshua Ray Walker opens. Tickets are $27 to $43. Matthew Keever 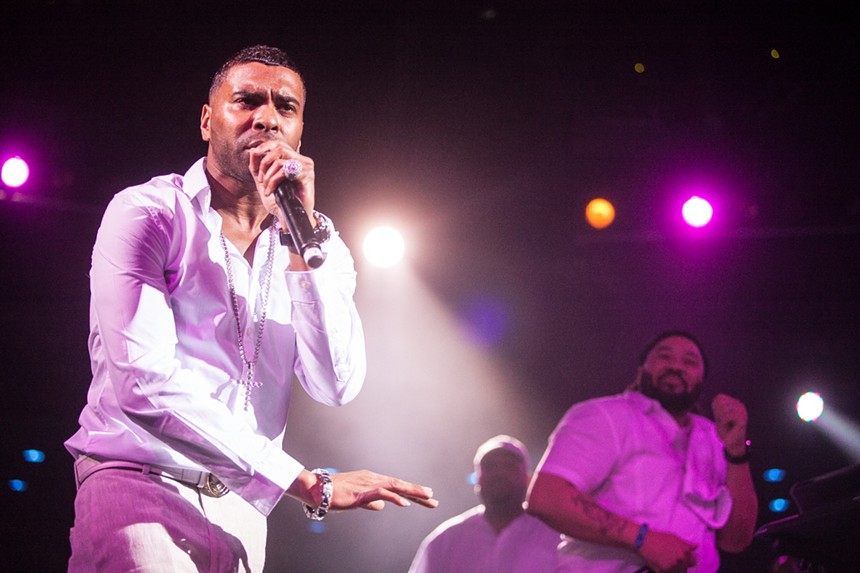 The last few years have been relatively quiet for R&B superstar Ginuwine, but when an artist has a single like “Pony” attached to their name, their legacy is secured, etched in timeless stone. Those low-end gurgles and gauzy production, Ginuwine’s smooth-as-silk and sensual-as-hell vocals — “Pony” is a nearly perfect song, forged from carnal charm and dreamy, midnight moods. It's bound to be on his setlist when he headlines the R&B Fall Jam on Friday, November 5, at Celebrity Theatre, 440 North 32nd Street. Joining him on the lineup for the 8 p.m. concert are R&B/neo-soul singer Sunshine Anderson and ‘90s hitmaker Case. Tickets are $70 to $155. Jonathan Patrick

As guitarists go, there are few who match the style and technique of Tommy Emmanuel. A developer of a complex and unique finger-picking style, he began his career as an in-demand session player before branching out to record and tour on his own. The accolades have rolled in. Chet Atkins called him “fearless” while awarding him the esteemed honor of “Certified Guitar Player.” Emmanuel’s playing has also bestowed upon him the dual high honors of being a certified Kentucky Colonel and a Member of the Order of Australia in his native land. Dig through his intensive YouTube channel and get familiar with how he turns standards and traditional tunes into something original and complex. It's a good precursor to his performance at 8 p.m. on Friday, November 5, at Mesa Arts Center, 1 East Main Street. Richard Smith shares the bill. Tickets are $29.50 at $49.50. Jeff Strowe

Blue Öyster Cult are probably best known to casual fans for their hit singles “(Don’t Fear) the Reaper,” “Godzilla,” and “Burnin’ for You,” which remain in heavy rotation on classic-rock radio today. Historically they’ve been labeled a metal band, yet their music encompasses so much more, with elements of progressive and psychedelic rock mixed in with the hard stuff. Their sound is unique and not easily categorized; many songs are downright strange and weird, in a good way. Founding members lead guitarist Donald “Buck Dharma” Roeser and lead vocalist Eric Bloom just keep on trucking after numerous lineup changes; in a more just world, BÖC would be playing sold-out arenas and record an album of new material as their musical peers Black Sabbath did before retirement. Then again, it is nice for BÖC fans to see the band play intimate venues on their current tour with Jefferson Starship – which comes to the Showroom at Wild Horse Pass Hotel & Casino, 5040 Wild Horse Pass Boulevard in Chandler on Friday, November 5 – and not have to pay an arm and a leg for the pleasure. Tickets are $37 to $82 for the 8 p.m. concert. David Rozycki

Jordan Carter, a.k.a. SoundCloud rap sensation Playboi Carti, began his rap career as a member of Awful Records, the iconoclastic Atlanta alt-rap collective headed by Father and featuring talents such as Abra, Key!, and iLoveMakonnen. He began gaining clout in the wider hip-hop world thanks to SoundCloud tracks such as "Broke Boi" and "Don't Tell Nobody." Last year, he released his self-titled mixtape, featuring the hit "Magnolia," a star-making song for both Carti and producer Pi'erre Bourne that made Bourne's production tag – "Yo Pierre, you wanna come out here?" – an instant sign that the DJ is about to drop a slapper into the mix. Carti also made it onto the XXL Freshman List, where he freestyled with the late XXXtentacion, and earned features on the like's of A$AP Mob's "RAF" and Lana Del Rey's "Summer Bummer." He’s supposedly got a new album, Narcissist, in the works, though he’s been less than forthcoming with information about the project. One thing we do know is that he’s scheduled to perform on Friday, November 5, at Mesa Amphitheatre, 263 North Center Street, with special guest Rico Nasty. Tickets for the 7 p.m. concert at $64.95. Douglas Markowitz

Michigan Rattlers at The Rebel Lounge

While the members of Michigan Rattlers — guitarist Graham Young, upright bassist Adam Reed and pianist Christian Wilder — eventually moved away from the northwestern part of the band’s namesake state at different points in their lives, the lifelong friends eventually reconnected and reformed the band that is so tied to the place where they were raised. Songs like "Brutus Road," from their 2016 debut EP, talk about driving down the back roads where they grew up and missing home. The Rattlers' newest release, That Kind Of Life, contains influences of their home state amid its eight songs, as well as the band's mix of country, rock ‘n’ roll, bluegrass, and Young’s smooth croonings about longing, heartbreak, and fading memories. Catch them in concert on Friday, November 5, at The Rebel Lounge, 2303 East Indian School Road. Doors are at 7 p.m. and Valley Orange and Amelia McLean open. Tickets are $12. Andy Thomas


George Thorogood and the Destroyers at Talking Stick Resort

For close to five decades, George Thorogood has been cranking out his brand of electric boogie blues. The Delaware native has released over 20 albums with his band, the Destroyers, and if you've paid attention to even a small percentage of movie soundtracks over the years, you've muttered along as a leading character walks away from a large fire in slow motion: "B-b-b-b-baaad." It's likely that "Bad to the Bone" would top the most used "badass doing something really badass in a movie" song list, as well as providing a soundtrack for dads manning barbecue grills the world over. Of course, Thorogood's music catalog and talent don't stop there, as his discography contains a wealth of great songs like "I Drink Alone," "Get A Haircut," and "Rock Party." All three will be on his setlist during Thorogood's performance at 8 p.m. on Friday, November 5, at Scottsdale’s Talking Stick Resort, 9800 East Talking Stick Way. Tickets are $35 to $125. Diamond Rodrigue

Rap legends Too $hort, DJ Quik, and Compton's Most Wanted will headline this outdoor hip-hop festival (the biggest since the pandemic) with a West Coast bent on Saturday, November 6, at Phoenix Sports and Events Complex, 2209 North 99th Avenue. That carries over to the support acts, which include SoCal and Bay Area artists like Pakistani rapper Capone-E, hardcore hip-hop star X-Raided, and groups like RBL Posse and The HRSMN’s Kurupt and Ras Kass. All the usual music festival trappings (vendors, food trucks, bars) will be available. Gates open at 4 p.m. and general admission is $40. Benjamin Leatherman

Kevin Costner (third from left) and the members of Modern West.
Zion and Zion

Kevin Costner is not only one of America's most respected and durable actors, the 66-year-old Oscar winner star of Bull Durham, Field of Dreams, Open Range, and more than 50 other films is also a lifelong musician. His country-rock act, Kevin Costner & Modern West, is a far cry from just another actor's side project. The band – which is fronted by the actor on guitar and also includes Tucson musicians John Coinman, Larry Cobb, and Blair Forward – has released five albums and was heavily involved in creating the music for the Costner-produced 2012 miniseries Hatfields & McCoys. It can be heard on their album Famous for Killing Each Other, a lengthy set of brooding Americana that has drawn favorable comparisons to some of T-Bone Burnett's productions. Another Costner television project, the Paramount Network drama Yellowstone, inspired the band’s latest album, which features songs told from the perspective of his character on the show. This weekend, their outdoor concert on Sunday, November 7, at Schnepf Farms, 24810 South Rittenhouse Road in Queen Creek, takes place the same day as the premiere of the show’s newest season. Gates open at noon and Jeordie and the Mixology Project open. Tickets are $50 to $150. Chris Gray

If there’s one thing that the more recent work of jazz/pop vocalist Jane Monheit proves, it’s that maturing doesn’t mean losing freshness and immediacy. Now more than 20 years into a scintillating career, the thrush might not be trying to invoke the nubile mermaid image she once projected, but she’s still performing with verve and impeccable instinct. She has always sung ballads with an understanding beyond her years, and that hasn’t changed one iota: Just when she seems to have lofted the final breathtaking note, she inevitably adds something astonishing. Catch her in concert at 7 p.m. on Sunday, November 7, at the Musical Instrument Museum, 4725 East Mayo Boulevard. Tickets are $44.50 to $64.50. David Finkle

When Christian Berishaj writes music, he disconnects. The iPhone is turned off, the email and texts and phone calls reach an electronic dead end, and the Los Angeles-via-Detroit artist seeks out space. Having undergone a series of musical iterations — first as multi-instrumentalist Love Arcade, which signed to Columbia Records, then later under the moniker Christian TV, which signed with Universal Motown — he struck out on his own and formed his own independent record label, White Room Records. With that independence, Berishaj built his own wheelhouse. As JMSN, Berishaj has been labeled as R&B, featuring atmospheric, aerated vocals and layers of hall reverb that draw immediate comparisons to the likes of The Weeknd and How to Dress Well. He’s put out six albums on his label, including this year’s Heals Me. Berishaj’s tour in support of the release comes to Crescent Ballroom, 308 North Second Avenue, on Sunday, November 7. Malia opens the 8 p.m. concerts. Admission is $20. K.C. Libman
KEEP PHOENIX NEW TIMES FREE... Since we started Phoenix New Times, it has been defined as the free, independent voice of Phoenix, and we'd like to keep it that way. With local media under siege, it's more important than ever for us to rally support behind funding our local journalism. You can help by participating in our "I Support" program, allowing us to keep offering readers access to our incisive coverage of local news, food and culture with no paywalls.
Make a one-time donation today for as little as $1.