15 Best Concerts in Phoenix This Weekend

Zigtebra is scheduled to perform on Friday, July 28, at Trunk Space. Mateo Teo
It’s going to be a busy weekend for live music in Phoenix. And there’s something for pretty much everyone.

If you’re into indie rock and pop, there will be great shows happening at spots like Valley Bar (which will feature L.A. band Froth) and Trunk Space (which has gigs from Zigtebra and Red Pony Clock).

And if your tastes in rock favor something a bit harder, Club Red in Mesa will host performances by He is Legend on Friday and a slew of local death metal bands battling for a spot at next month’s Summer Slaughter tour stop on Saturday.

And, as always, there will be plenty of DJ and dance music events taking place, such as appearances by EDM artists Green Velvet, Matoma, and AlunaGeorge.

Full details for each of these shows can be found below, and even more live music events happening this weekend are within our extensive online concert calendar.

Country crooner Dwight Yoakam.
Emily Joyce/Warner Bros. Records
Dwight Yoakam
Friday, July 28
Celebrity Theatre
Dwight Yoakam's most recent albums – 2015’s Second Hand Heart and last year’s Swimmin' Pools, Movie Stars – stay fiercely true to the honky-tonk, hillbilly aesthetic and sound that made him famous in the late 1980s. You could throw these records into any of the four decades that Yoakam has been making music and it would make perfect sense, and still top the charts. But with these records, Yoakam manages to somehow maintain his classic sound while recording one of the most stylistically diverse records of his entire career. He's been relatively quiet since the release of 3 Pears, a woefully underrated record that was somehow great even though Kid Rock was involved, in 2012. Yoakam's songs haven't been country-radio material since the 1990s, so he's been functionally tossed over into the Americana bin, which mainstream music happily ignores until it's ready to let folksy bands blow up the charts for a while (see: Mumford and Sons). Yoakam's relevance, though, really never has waned. Amy McCarthy

L.A.-born rapper King Lil G.
Karin Catt
King Lil G
Friday, July 28
Club Red in Mesa
In a genre that often slants toward extremes, rapper King Lil G seeks moderation. He’s a moralist without being self-righteous, an ex-gangbanger and dope dealer raised by a single mom, attempting to steer people away from the traps that once ensnared him. He gets high but not too high. The songs feel real in the stories and people that they portray. They’re filled with temptation, regret, and pain, as well as celebration, brown pride, and joy. 2Pac famously said it “wouldn’t be L.A. without Mexicans.” Lil G is the grown-up kid who heeded his call, determined to be a voice for those whom the system failed. His biography is embedded in the music. Listen to his most popular song, 2014’s “Hopeless Boy” (8 million YouTube views and counting): “Fuck rapping and bragging about the way you balling / Spray cans in my backpack and I was starving / In middle school with a trey five seven revolver / My family said I wasn’t going to make it / Now I’m grinding harder.” Jeff Weiss

Curtis Allan Jones, better known as Green Velvet.
Courtesy of Paradigm Talent Agency
Green Velvet
Friday, July 28
The Pressroom
The science world’s loss is electronic dance music’s gain when it comes to the renowned career of Green Velvet. Back at the dawn of the ’90s, he was just Curtis Allan Jones, a chemical engineering student who gave up his beakers and test tubes in favor of a keyboard and a drum machine. After earning his bachelor’s degree, he eschewed further study, moved to Chicago, embedded himself in the city’s now-legendary DJ scene, and devoted all his time and energy to creating house music. And things took off from there. As Cajmere, his first moniker, he created such infectious tracks as “Coffee Pot (It’s Time for the Percolator)” and the super-catchy 1994 collaboration with Dajae “Brighter Days,” which became an international sensation and a Billboard hit. A few years later, he transformed into his ultra-flamboyant, David Bowie-inspired alter ego, Green Velvet, developed a Kraftwerk-influenced blend of hard-hitting techno, and released a string of hits — including “Preacher Man,” “Answering Machine, and “Flash” — that earned him fame and fortune. You’re likely to hear many of these tracks, as well as material from such aughts-era albums as Whatever and Walk in Love, during Green Velvet’s gig on Friday, July 28, at The Pressroom. Benjamin Leatherman

DJ Mercurius FM
Benjamin Leatherman
Good Times: A Disco Party for Boys & Girls
Friday, July 28
Rips Ales & Cocktaiks
Get ready to boogie all night long, because Rips is reviving the ’70s for one night only. Good Times: Disco Party For Boys & Girls starts at 9 p.m. on Friday, July 28. Get ready to shake your groove thing to the sounds of disco, electro boogie, proto-house, and Italo disco, courtesy of DJ Mercurius FM and DJ Fact135. Expect all-night drink specials and free pizza. Disco attire is encouraged. So whip out those bell-bottoms and strap on those platforms. Lindsay Roberts

The rockers of He is Legend.
Courtesy of Atom Splitter PR
He is Legend
Friday, July 28
Club Red in Mesa
He Is Legend is the best band you've never heard of. The Wilmington, North Carolina, rockers have been kicking out their unique blend of blues-based metallic rock since 2003. After a short hiatus in 2009, the outfit returned with a revamped lineup, including rhythm guitarist and backup vocalist Denis Deloge, for 2014’s Heavy Fruit. Coming of age in the post-hardcore days of the early 2000s under the moniker the Uriah Omen, He is Legend has experimented with their sound since the band's debut, I Am Hollywood, in 2004. Elements of Southern rock, psychedelia, and alt-rock can be heard on 2006's Suck Out the Poison and 2009's It Hates You. Schuylar Croom is the eccentric frontman whose poetic lyrics often tell stories of sorrow. Lead guitarist Adam Tanbouz and bassist Matty Williams form a funky tandem that propels each album in unpredictable directions. On Friday, they’ll invade Club Red in Mesa. A slew of local hard rock and metal acts – including To Speak of Wolves, Bad Seed Rising, Islander, American Standards, and & As Thick As Thieves – will open the evening. Justin Criado 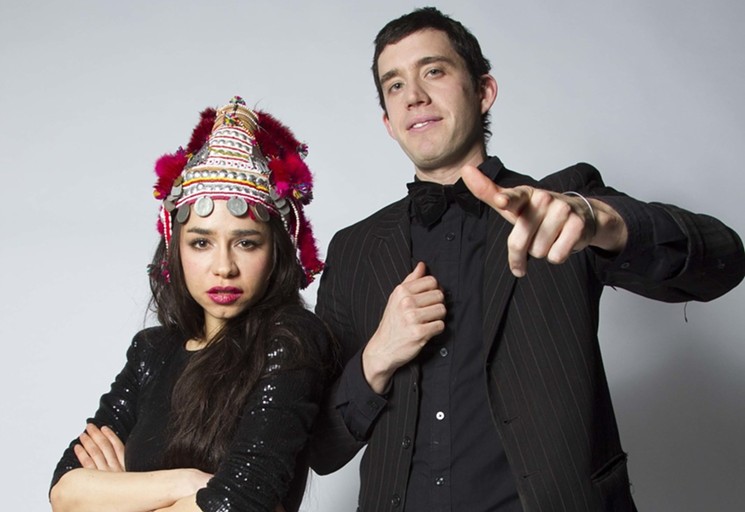 Emily Rose and Joe Zeph of Zigtebra.
Mateo Teo
Zigtebra
Friday, July 28
Trunk Space
Zigtebra is in the midst of a rather ambitious project. The Chicago-born bedroom pop act, which consists of half-siblings Emily Rose (a.k.a. Zebra) and Joe Zeph (a.k.a. Tiger), are crafting and releasing one music video per month in 2017, and the results thus far have been both quirky and diverse, to say the least. "Take My Hand I'm Ready," their most recent effort, features a variety of creepy-looking windup animal toys interspersed with footage of Rose singing to the camera. And in last month's video for the song “Wild Child,” she bombs around a sylvan jungle like Lara Croft. The only commonality shared by each video is Zigtebra’s dreamy pop music, which prominently features Rose’s angelic vocals. You’ll hear both filling the Trunk Space on Friday during their show, which will include performances by Leika Kitamura and The Woodworks. Benjamin Leatherman

Jeff Rosenstock
Courtesy of Jeff Rosenstock
Jeff Rosenstock
Saturday, July 29
The Rebel Lounge
“They’re pushing you out in the name of progress and selling your memories to the tourists,” Jeff Rosenstock hollers on “Wave Goodnight to Me.” It’s just one of several songs on his new album, Worry., which deals with gentrification. In an age when every arts district in America looks like it’s in a race to see who can transform themselves into a luxury condo enclave first, it packs a powerful punch. While lyrics like “The city don’t care if you live or die / It’s just gonna grow and it doesn’t care why” drip with bitterness, it isn’t reflected in the sound of Rosenstock’s music. The pop-punk and third-wave ska veteran has built up his songwriting and frontman bona fides working with groups like Bomb the Music Industry!, The Arrogant Sons of Bitches, and Kudrow. You can hear his years of experience in Worry. and We Cool? They’re anthemic, enthusiastic records, brimming with passion. He sings his songs as though you already know all the lyrics and he’s just trying to match your volume as you sing them back to him. It isn’t surprising that Rosenstock chooses to work so closely with DIY spaces, considering his ethical stance on touring and record releases. He comes from a long underground tradition of keeping music cheap and accessible — in the vein of Fugazi’s $5 shows or The Minutemen’s goal of being as self-contained a unit as possible when they booked and performed shows. Ska and pop-punk has traditionally been a young man’s game, but Rosenstock has managed to stay relevant by talking about the anxieties of growing older while playing music that still has plenty of youthful piss and vinegar. Ashley Naftule

AlunaGeorge and Peking Duk
Saturday, July 29
The Pool at Talking Stick Resort in Scottsdale
In 2012, Aluna Francis and George Reid released their first single, "You Know You Like It." And though the duo's first album, Body Music, was still more than a year away, that debut track proved to be a fantastic piece of future-pop-meets-R&B with a hint of garage, a perfect introduction to AlunaGeorge. Featuring Francis' distinct vocals, which contain just the right amount of swagger, the track didn't exactly burn up the charts but instead was the kind of cut that was eagerly embraced by DJs, who quickly turned the song into a dance-floor staple. Later, in 2013, French producer DJ Snake, best known for "Turn Down for What" — the hit that introduced trap music to your mother — gave "You Know You Like It" a rework featuring his signature snares and staccato with a beat that seemingly tripped over its own feet. But the remix still didn't gain much attention until it was released as a standalone single in 2014, eventually reaching number 13 on the Billboard Hot 100 in 2015 — a full two years after its original release. This weekend, AlunaGeorge will perform at one the latest Release pool parties at Talking Stick Resort in Scottsdale along with Peking Duk. Gates open at 11 a.m. Admission is free for for ladies, $10 for guys after noon. Jose D. Duran

Read on for even more concerts and music events happening in Phoenix this weekend, including Pharoah Sanders, Avi Buffalo, and Matoma.