Megadeth is scheduled to perform on Sunday, August 29, at Arizona Federal Theatre. dr_zoidberg/CC BY-SA 2.0/Flickr
The hesher crowd is in for a big weekend as multiple metal bands will rock a few different metro Phoenix music venues over the next several nights. August will end with a bang (not to mention plenty of sick riffs) when Megadeth and Lamb of God bring their high-profile tour to Arizona Federal Theatre, progressive/alternative metal band Coheed and Cambria will be at Mesa Amphitheatre, and homegrown thrash kings Flotsam and Jetsam take over The Nile in Mesa.

Beyond these rip-roaring metal offerings, this weekend will see concerts returning to Ak-Chin Pavilion and the Rhythm Room, Punk Rock Karaoke at the Rebel Lounge, and the chance to revisit the music from a beloved ‘90s cartoon.

Details about each of these events can be found below. For even more live music happening around the Valley, check out Phoenix New Times' online concert calendar.

Keep in mind, though, that the Delta variant of COVID-19 is a growing danger right now and venues will be crowded with people at many events. If you’re going to attend, we encourage you to take precautions like wearing masks or maintaining social distancing.
click to enlarge 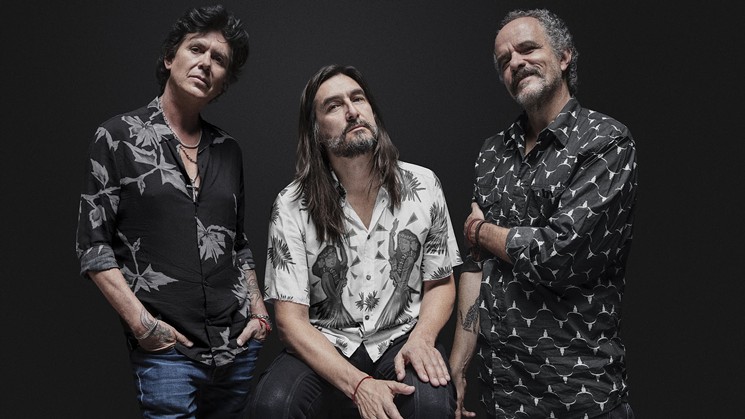 What do you get when you combine Spanish lyrics, British New Wave, prog-rock, and a whole lot of Latin percussion? Caifanes, that's what. The Mexico City natives were influential players in the late-'80s Latin-rock scene, and at the height of their popularity were compared to post-punk gods like The Cure and The Jesus and Mary Chain. After an ugly breakup in the mid-'90s, which included a legal battle over rights to the band name, Caifanes reconciled in 2010 and hit the touring scene again with their full original lineup to relive the days when they opened up for the Rolling Stones and Peter Gabriel. They’re scheduled to perform at 8 p.m. on Friday, August 27, at Harrah's Ak-Chin Casino in Maricopa. Tickets start at $49.50. Angelica Leicht 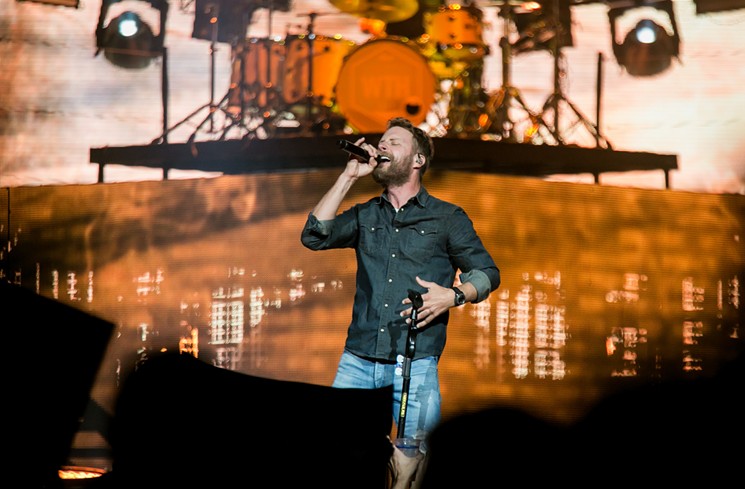 Hometown boy Dierks Bentley will have the honor of being the first big name to perform at Ak-Chin Pavilion, 2121 North 83rd Avenue, in more than a year when he comes to the venue on Friday, August 27. And while the thought of an outdoor concert in late August is somewhat daunting, when the Phoenix native and country star comes back to town, attention must be paid. Bentley will perform in west Phoenix as part of the Beers on Me Tour. Riley Green and Parker McCollum are the opening acts for the 7 p.m. show. Tickets start at $41 plus fees for lawn seating, but you may want to pony up for seats with a little more shade. Jennifer Goldberg

The Atomic 44s at Rhythm Room

Almost 18 months after shutting its doors, going dark, and enduring the ups and downs of surviving the pandemic, the Rhythm Room will make its return on Friday, August 27. Fittingly, the local blues institution, which dates back to 1991, will feature a band from the genre during its reopening night festivities. Blues-rock act The Atomic 44s will celebrate the venue’s revival and the release of their latest CD, Volume One, at the event. Doors are at 7 p.m. Admission is $15. Benjamin Leatherman Coheed and Cambria return to the Valley for the first time since 2018.
Jimmy Fontaine

Coheed and Cambria and The Used at Mesa Amphitheatre

Coheed and Cambria release concept albums based off a sci-fi storyline called The Amory Wars. After taking a break from the concept albums for The Color Before The Sun, they are back with the storyline for their newest album, Vaxis – Act I: The Unheavenly Creatures. They're co-headlining this tour – which comes to Mesa Amphitheatre, 263 North Center Street, on Saturday, August 28 – with emo/post-hardcore band The Used, who are touring off their 2020 album, Heartwork. Pop-punkers Meet Me At the Altar, who round out the bill for the 6 p.m. show, released their latest album, Model Citizen, earlier this month on Fueled By Ramen. Admission is $49.50. Paige Skinner On first listen, the sound of The Milk Carton Kids has the unmistakable air of indie-folk. Crystalline acoustic guitars are loosely wrapped around the Simon and Garfunkel-style close harmonies of the two lead singers. But digging deeper, there's a southern influence in the slight twang and bending of the duo's vocals. The undertones add a depth that pushes their music slightly beyond the somewhat saturated world of indie-folk, making it clear that both members have deep catalogs of country and folk influences to pull from. Catch them in concert on Friday, August 27, and Saturday, August 28, at the Musical Instrument Museum, 4725 East Mayo Boulevard. Both shows start at 7 p.m. and singer-songwriter Haley Hannah Heynderickx will open. Tickets are $49.50 to $64.50. Matt Wood 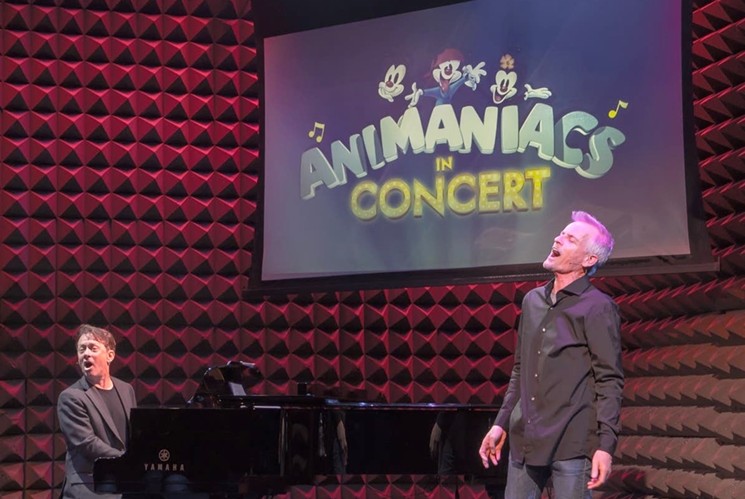 Many a ’90s kid spent time in front of the tube watching Animaniacs and witnessing the antics of the Warner siblings, Yakko, Wakko, and Dot. The animated show was “zany to the max” (according to the theme song) and offered wise-cracking, slapstick-loving fun that frequently broke the fourth wall. It also featured a variety of memorably humorous tunes sung by the siblings, including songs respectively listing every U.S. president (up to that point, at least), all 50 states, and the nations of the world.

The touring production Animaniacs in Concert – which comes to Madison Center for the Arts, 560 North 16th Street, on Saturday, August 28 – showcases many of these tunes, which will be sung by Rob Paulsen, the voice of Yakko, and Maurice LaMarche, the actor behind The Brain. Randy Rogel, the show’s composer, will accompany them on piano. Tickets are $39 to $49 for the 7 p.m. performance. Masks are required, but baloney in your slacks is optional. Benjamin Leatherman

Flotsam and Jetsam at The Nile Theater

For our money, Flotsam and Jetsam kick out some of the best thrash metal around, and that’s not just because they are a bunch of hometown dudes who have made good. The band has made an impact on the world metal scene, and in fact, the glory days of “Flots” might be upon us right now. Eric “AK” Knutson, vocals, and Michael Gilbert, guitar, have been with the band the longest, but the current lineup, which also features guitarist Steve Conley, bassist Bill Bodily, and drummer Ken Mary, is nothing short of formidable. Flotsam and Jetsam are currently on their first tour since the pandemic and will perform at The Nile Theatre, 105 West Main Street in Mesa, on Saturday, August 28, so expect them to be firing on all cylinders for a hometown show. Local Empire of Dezire, Kill Command, and Dawn of the Rising will open the 7 p.m. show. Tickets are $20 in advance, $25 at the door. Tom Reardon

Karaoke as a contact sport? You bet! Moshing in these times of COVID-19 is probably not the greatest idea, but you never know what will happen when Punk Rock Karaoke comes to town, now in its 25th year of existence.


Led by Greg Hetson (Circle Jerks/Redd Kross/Bad Religion), this all-star lineup of punk icons brings the most unique karaoke show this side of CBGBs (RIP) to Phoenix on Saturday, August 28. If you've ever wanted to sing one of your favorite punk songs backed by a band that includes Hetson and Stan Lee (The Dickies) on guitar, Randy Bradbury (Pennywise) on bass, and Darrin Pfeiffer (Goldfinger) on drums, it's time to step up and show what will probably be a sizeable crowd what you've got.

With a nice (and diverse) catalog of songs to choose from, the brave souls that join the fray will have an opportunity to feel what it is like to play punk rock at the Rebel Lounge. Longtime local fun-making punkers No Gimmick open the show along with a set by the excellent trio The Linecutters to get things going, so show up early if you want to take in the entire spectacle. Tickets are available here for the modest fee of $16 (plus service fees) or take your chances on getting yours at the door. Doors open at 7:30pm. Tom Reardon 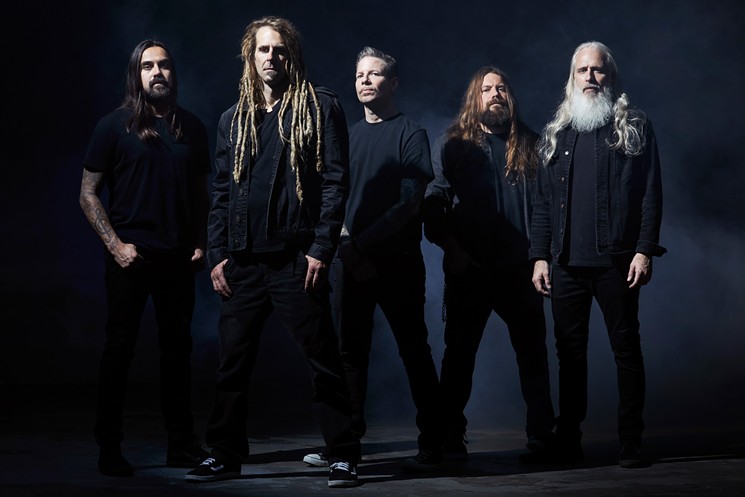 Megadeth and Lamb of God at Arizona Federal Theatre

Phoenix’s stop on the “Metal Tour of The Year,” which was postponed due to the COVID-19 pandemic, is finally happening this weekend. It will mark Megadeth’s first tour in four years and Lamb of God’s first in support of their latest record, which has garnered quite a bit of fanfare when it was released last year. Both bands have made statements online that, following the lockdowns and quarantines, their co-headlining shows shouldn’t be missed, so expect a rowdy crowd and a loud show. Supported by Trivium and Hatebreed, the two iconic metal outfits will take over Arizona Federal Theatre, 400 West Washington Street, on Sunday, August 29, starting at 6 p.m. Tickets are $39.50 to $99.50. Matthew Keever

Grown from the same musical soil as Lynyrd Skynyrd, in their ’70s heyday Molly Hatchet specialized in ferocious melodic leads. The bandmates have still got the chops, and their powerful boogie overdrive is guaranteed to get your heart racing. Their fast, thoughtful, string-bending solos should prove that an old-fashioned, long-hair-’n’-beards boogie band can still rock out as well as the young'uns. See for yourself when Molly Hatchet comes to Marquee Theatre, 730 North Mill Avenue in Tempe, on Sunday, August 29. Southern rocker Christopher Shayne and local act The Donny Grubb Band open the 7:30 p.m. show. Tickets are $25 for general admission and $65 for the balcony. David Gurney
KEEP PHOENIX NEW TIMES FREE... Since we started Phoenix New Times, it has been defined as the free, independent voice of Phoenix, and we'd like to keep it that way. With local media under siege, it's more important than ever for us to rally support behind funding our local journalism. You can help by participating in our "I Support" program, allowing us to keep offering readers access to our incisive coverage of local news, food and culture with no paywalls.
Make a one-time donation today for as little as $1.