Brian Moss of Spafford on His Secret Weapon, a Guitar He Calls 'The Raven' 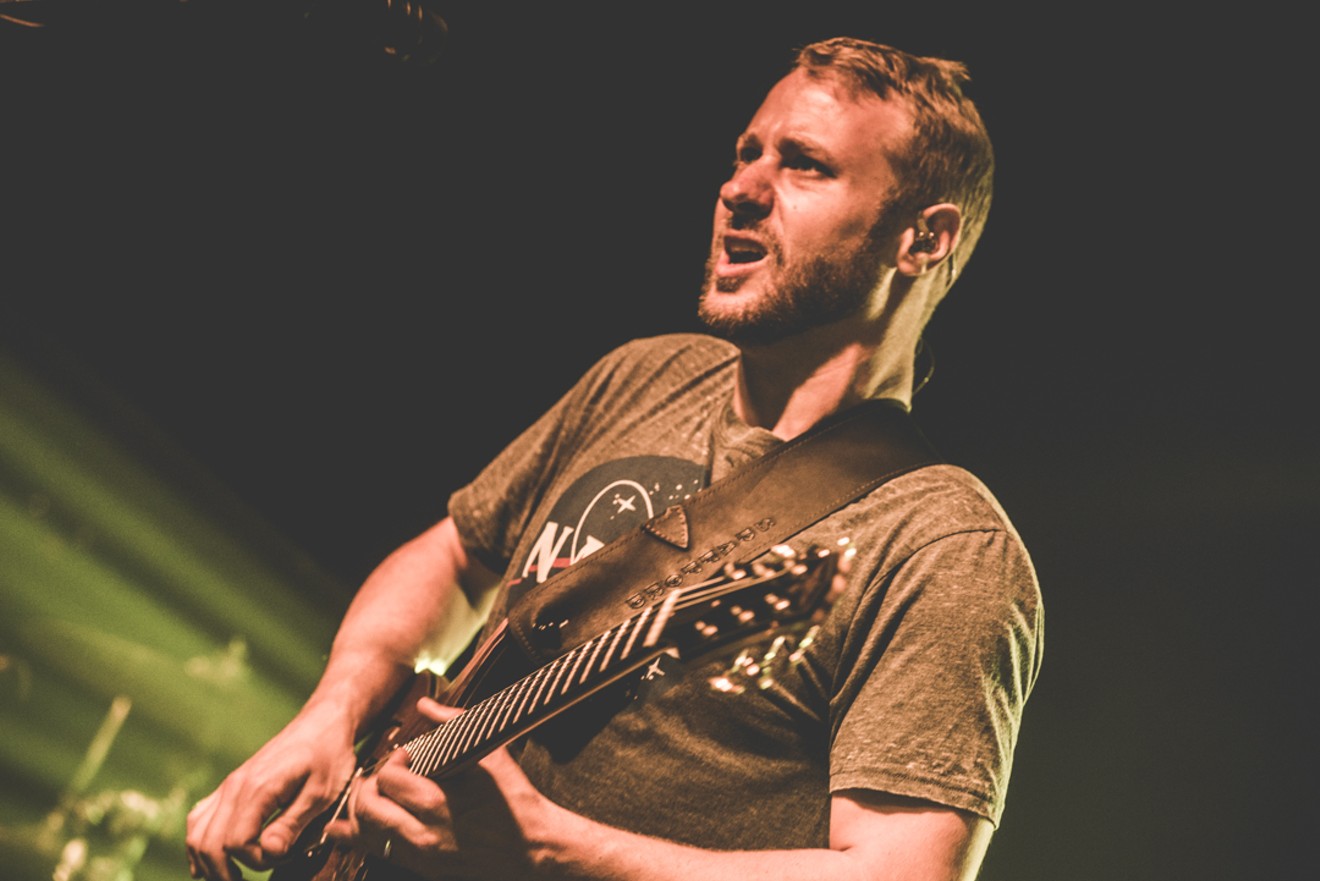 Moss on stage in Chicago April 8, 2017. Tara Gracer
In Pound For The Sound, we get technical with local musicians about what gear they use to create their signature tones.

In 2008, Brian Moss decided to leave Tempe, AZ for the fresh air of northern Arizona. Before departing, he fronted a band called Mossy Rocks, playing regularly at venues like Yucca Tap Room and the now-defunct Sail Inn. Tempe just wasn't doing it for him anymore, as had enough of the local scene and needed a fresh start.

In 2009, with help of Jordan Fairless, the band Spafford was born. The pair were constantly evolving the sound and the lineup. For guitarist Moss, amazing tones, great riffs, and killer solos are par for the course, so they needed top-notch musicians to match their levels of musicianship and drive.

Flash forward almost a decade and Brian, and the rest of Spafford, have had a stellar start to 2017, fresh off the release of Live Volume II in November 2016. They have officially broken out into the national "jam band" scene. The band spent a good part of the winter/spring touring and recently wrapped 20 dates across the US supporting jam legends Umphrey's McGee. And the rest of the year looks like it'll be just as busy. They're set to play festivals such as Electric Forest, Summer Camp, The Peach, and Resonance, to name a few.

Moss, with his wife and their cat Peanut, recently moved back moved back to Valley. And the band are en route to Phoenix to close out their most recent tour with two sold-out shows at Last Exit Live. Luckily, New Times was able to get some words in, via phone and e-mail, with Brian before the big weekend.

New Times: What's the secret weapon of your sound? And how did that help you find your "signature" tone?
Brian Moss: The secret weapon starts with my guitar. It was made by a local Sorcerer Sir Andrew at Thomas-Milana guitars in Phoenix. I was told it was built with the tears of a witch and the blood of a dragon. This guitar, [that] I've named “The Raven,” is the source of my signature tone. 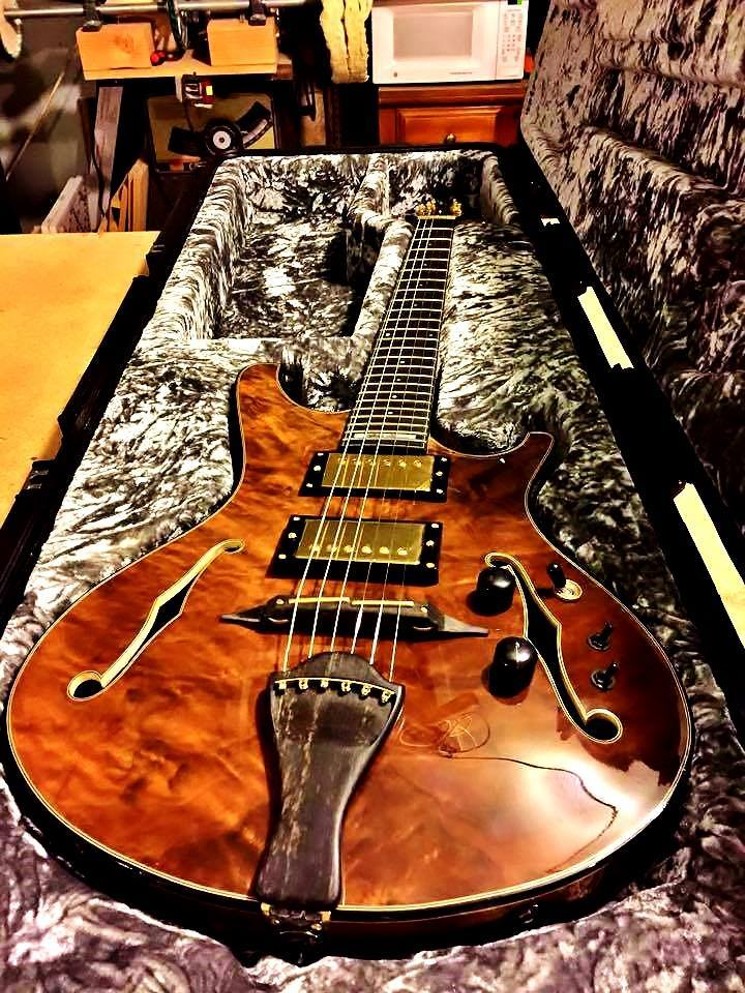 Brian's axe, "The Raven."
Tara Gracer
What's your favorite piece of gear in your collection and why?
Other than my guitar, I have a vintage 1969 Plush Amp Head coupled with an open back cab stacked with 2 EV12L’s. I acquired this amp many years ago and I have been trying to emulate its tone in a road-ready combo amp. Still have not found a replacement.

Any special pieces of gear acquired over the years? Any special story, or stories, behind your collection of tools?
Yeah, basically I bought a bunch of shitty pedals over the years. They are special because they helped me find what I don't want. Jordan and I trade pedals all the time curious to see if a bass synth auto wah pedal would work for a guitar and trying different compressors, time-based effects, and whatnot. Sometimes it works and sometimes it's a disaster. But it's always an awesome time.

You do a great job of keeping things lively and engaging on the guitar in Spafford. On the opening track titled “America” on Live Vol. 2, you are all over the place with your guitar with some monster playing. When listening, one can hear some heart-felt gritty rock, crazy psychedelic tones, spacey riffs, and so much more. Can you please describe your work on that specific take of that song and walk us through your process on how you get the sounds you did?
I mean, I just let the song take me where it wants to take me that night. I don't remember playing that version live but yeah I was on one that night. There are always so many variables that go into a night of Spafford. It is purely an “in the moment” experience. The venue, the fans, the weather, outside, inside, set time, did I get sleep, is the band tuned to the room, can we hear each other clearly. [These] are all variables that change the songs night after night. That's the beauty of playing in an improv band with loose ideas of where songs end up. If it's goin’, go.


You guys record your live shows and have them for sale on www.livedownloads.com, and they are entire sets. How do you go about making this happen on a consistent basis?
Haha, well I don't have all day to explain the full workday. But from start to finish, there are many things to take into account. We run about 30 channels most nights and use all our own system we built to acquire the best recordings night after night. Quite the setup and breakdown, but the truth is we make this happen by our true dedication to our music and to our fans.

You guys are playing two nights in a row at the Last Exit Live this weekend, and each show your band does is a “that night only” kind of unique experience. Anything in particular you want to share about these shows for fans to know about?
This is our first headlining hometown show since we left for tour on Jan 15th. The double headers at Last Exit have been fruitful in the past so everyone better buckle up 'cause we're coming for you Phoenix!