In Conversation with Michael and Jonathan Rosen of Cones 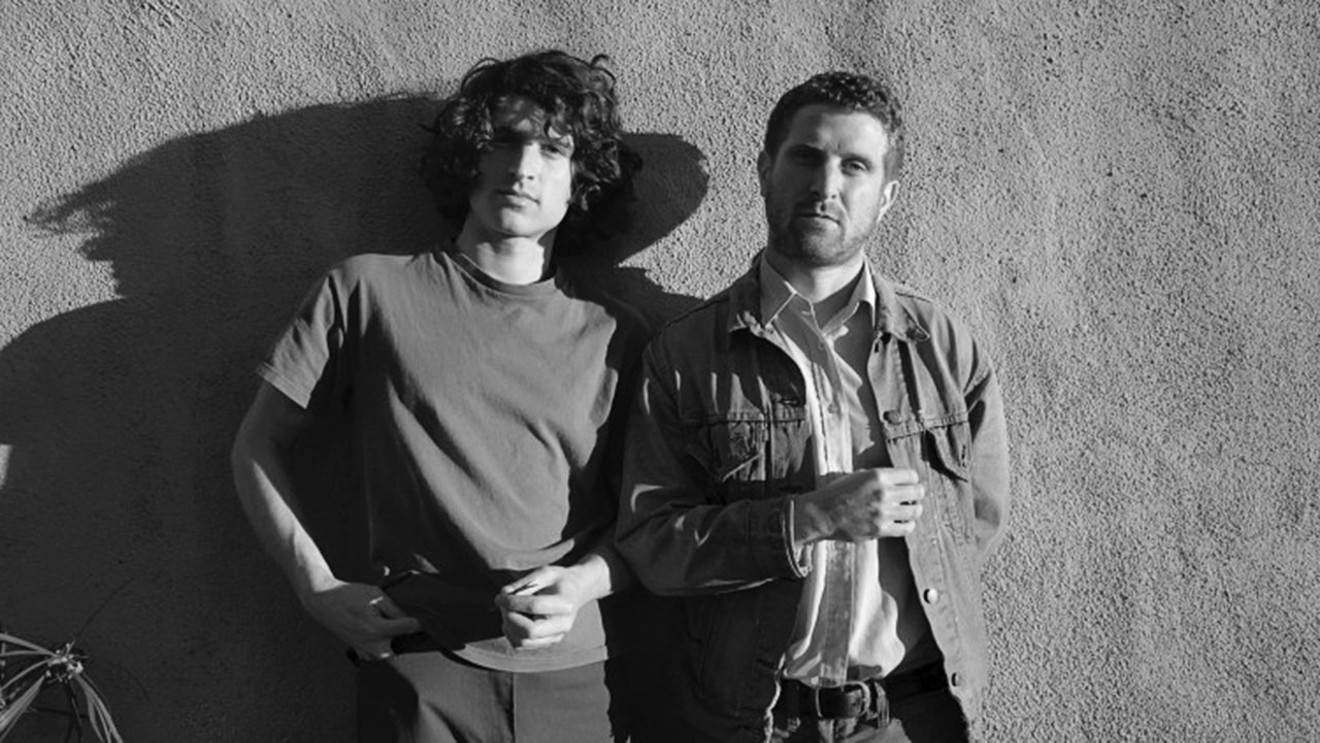 The band's barely more than a year old, but Michael and Jonathan Rosen have been making music together for years. And they've worked with some impressive players, including recording and touring with Fiery Furnaces singer Eleanor Friedberger.

Michael is also prolific and talented in his own right. A busy commercial and film composer, he's used his background in classical composition to put together experimental recordings and craft luxurious soundscapes.

Together, they have combined their talents into Cones, creating sunny, vibrant pop music that features lush arrangements, playful melodies, and hallucinatory music videos.

We talked with the brothers Rosen as they were getting ready to head out on tour. The conversation veered from animation to Big Star to what it's like making music with someone you grew up with. (This interview has been edited for clarity and length.)

Phoenix New Times: What’s your collaborative process like? As brothers and fellow musicians, how do you sort out the division of labor that goes into writing songs for Cones?
Michael Rosen: We’ve been a band for a little over a year now. Obviously, as brothers we have a history of collaboration together. We’ve played in bands previous to Cones. We had a group called Icewater and we played with Eleanor Friedberger. We were collaborating and writing music together. Jonathan was playing bass.

With Cones, our creative distribution has been evolving with each new song and project we approach. We have a producer/songwriter vibe. Jonathan has a bit more of a pop mentality — he writes song structures and vocals, vocal melodies. He comes in with a song and I’ll take more of an abstract, positional production approach to it. I studied classical composition in college ... We have a producer/songwriter vibe. Like I’ll write a hook with a melody and Jonathan will flesh it out into a full song. That’s sort of our workflow.

The two of you have been working with other bands for years. Whether it’s supporting Eleanor Friedberger or doing music videos for bands like Toro y Moi, you’ve seen how other artists approach putting records together and getting them out into the world. How have those past collaborations rubbed off on you? Did you learn any lessons from those groups that you try to apply to your own work?
Jonathan Rosen: We definitely learned a lot from Eleanor. She has such a strong aesthetic, both visually and musically. She is so well-versed, just an encyclopedia of music. I learned about so many great bands through her. And she’s also very adept at incorporating her influences into her songwriting, so that was something that was really inspiring for me. When we were writing with her for the record New View, she’d bring in a track and be like, “I want a similar feel, but maybe change this or that.” That whole approach was very educational.
How do you all work together on your music videos? Do you conceptualize them together, or is it more of Jonathan’s baby because he animates them?
Michael: I actually do all the animation.

Jonathan: He’s joking! As bad as an engineer as I am in the studio, Michael is as bad as an illustrator. But when I’m brainstorming for a video, I’ll keep him informed. He’s got faith in me, which I’m grateful for. I’ll show him the progress as I’m animating because it’s very time-consuming and laborious.

As an animator, what are your influences? Your videos have such a distinctive and playful style to them.
Jonathan: Some of my favorite illustrators ... Saul Steinberg; I’m obsessed with him. I love Picasso. I know it’s like saying The Beatles are your favorite band, which they are, for me. But something that drives me as an animator is imagining what some of these artists, like Steinberg and Picasso, what their animations would look like.

That being said, I also love Philip Guston, Francis Bacon, Georgia O'Keeffe, all those heavy-hitters. And Nickelodeon — I grew up watching ‘90s Nickelodeon shows and eating sugary cereal. Right when I graduated from college I worked for an animator named Bill Plympton, who was a huge influence on me before I even got the job. Working for him was like going to animation school. It was amazing.

On the musical side: What inspires the sound of Cones?
Jonathan: For me, I love '60s and '70s rock. I love Big Star and Bob Dylan.

Michael: Big Star is definitely a big influence in terms of tone, stylistic approach, and intent. When you’re talking about musical influence, you’re not just talking about the sound but the intention of it ... Jonathan and I are big Alex Chilton fans through and through. I think musically we take things from different places — like we’ll take Big Star’s guitar sound and mix it with the Bee Gees. We grew up dancing around to the Bee Gees in our pajamas as little kids.

Michael: Yeah, we did, man … We’re really focused on groove.

Jonathan: Some of our songs have a hip-hop foundation to them. They’re not hip-hop songs, but they have that heavy, weighty backbeat. And we’ve got some songs that are glammy.

Michael: The new full-length LP we’re finishing up sort of explores the full spectrum of our influences.

Do you use your videos and Jonathan’s animations as part of your live show?
Michael: That’s something we’re going to focus more on when we finish our record — integrating our visual stylings with our live performance. That’s our next step.

Jonathan: I want to create weird, trippy animations that last for the entire set. I’m excited to conceptualize and enter that world.

Cones are scheduled to perform at The Lunchbox on Friday, March 9. Tickets are $7 via Ticketfly.