Depeche Mode Never Let Us Down at Ak-Chin Pavilion I've come to enjoy the security theater that happens outside Ak-Chin Pavilion every time I go see a show there. The security staff at Ak-Chin is really committed to their roles. Like the finest of ham actors, they know not to let an opportune moment pass them by.

Warpaint are already playing inside the venue. Their dancey yet moody music spills out into the parking lot. A swarm of black-clad revelers are amassing at the entrance, eager to get their Wednesday night goth club stomp on. I'm standing behind a gentleman wearing a blue baseball cap, who's rather nonplussed that the security guard is asking him to take his hat off.

“Dude, what could I possibly have under this?,” Blue Hat asks. The guard shrugs and flashes him an “I know, right?” grin. But the guard still insists he take it off. I imagine Blue Hat plucking off his cap, revealing a razor blade Scotch-taped to the bald spot on the top of his head. But alas. He was contraband-free.
Walking past the cops lined up at the entrance, the mood changes instantly into one of conviviality inside the venue. People look stoked to be here, more so than at most shows I've been to. Perhaps it's because the crowd skews older – the average age here has to be early 40s. People move about, buying beers and merch, with purpose: They had to pay babysitters so they could be here, they had to take the day off work tomorrow, so you can bet your ass they're gonna groove to some dark jams tonight and get lit.

By the time I get to my seat, the quartet of ladies in Warpaint are wrapping up their set. A set of screens that look like windows loom behind them, with smoke curling around their sides and lights flashing purple, blue, and yellow across the stage.

The handful of songs I get to hear them play leave a powerful impression, though. Tracks like “New Song” take their ghostly vocals and moody atmospherics and give them driving rhythms and pop energy. For a band that sounds so spectral and introverted on record, they have the volume and the presence to hold a stadium crowd's attention.

The stage is cleared for Depeche Mode. 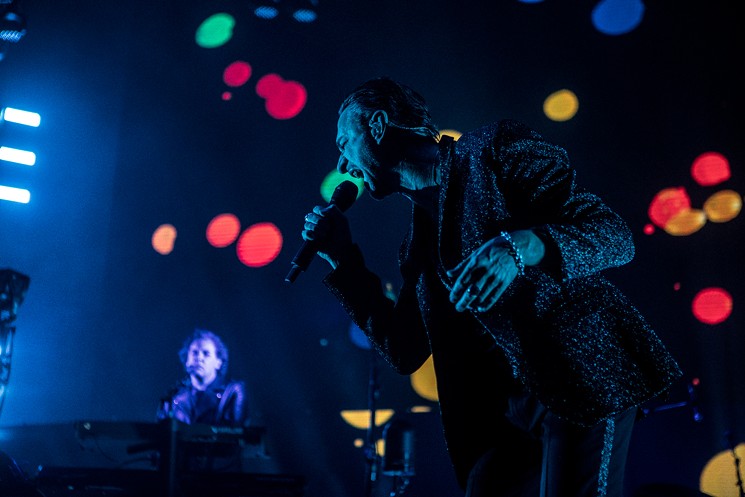 Depeche Mode performed at Ak-Chin Pavilion on Wednesday, September 27.
Jim Louvau
A tall elevated stage/backdrop is set behind the instruments, including an array of guitars, keyboards, and a peace-sign decorated drumkit. Throbbing electronic instrumentals kick and snap through their preshow. When the lights cut out and the fuzzy strains of The Beatles' “Revolution” starts playing, the crowd leaps to their feet. It's only fitting that the first thing we see onstage is feet: a pair of cartoon white legs, striding purposefully forward on a projection screen hanging over the stage.

As the band enters, the backdrop comes to life with a brightly colorful Jackson Pollockian splatter image. They begin playing “Going Backwards” and Dave Gahan enters, dressed in black.

Throughout the entire show, Gahan is the only one onstage without an instrument. But he doesn't need one – more than his voice, his body is his instrument.

He sashays and chicken-walks and spins and struts onstage. You can tell that he must have studied the great rock 'n' roll frontmen the way guitarists study Hendrix and Clapton – he had all their moves down cold. The Bowie Thin White Duke poses, the Pete Townshend windmill, the messianic Bono lean, the Mick elbow-on-the-hip, the cock rock crotch-grab (a move nobody could miss because the Jumbotron cameraman lingered on it — he knows that you gotta give the people what they want).

Speaking of Bono: Seeing Gahan with his slicked back hair, leather vest, and Claude Rains mustache made me wonder if he was one of the models that Bono used for creating his decadent Fly character during the Achtung Baby/Zooropa years.

Onstage, Gahan embodied a kind of sensuality and cheerful sleaziness that you don't see much of anymore in modern music – few people have the charm, the chops, or the chutzpah to pull it off. But Gahan is so good at it that it's criminal that nobody's cast him as the Master of Ceremonies in a post-punk production of Cabaret yet.

The band worked their way through their later work for the first half of the set, supplementing impassioned live performances with video projections and backdrop changes.

During “So Much Love,” a video of Depeche Mode as a trio appeared behind them, playing the song in black and white as they stood in front of a chainlink fence. Later on, Gahan would appear onscreen as an astronaut walking around town as the group tore through “Cover Me.” 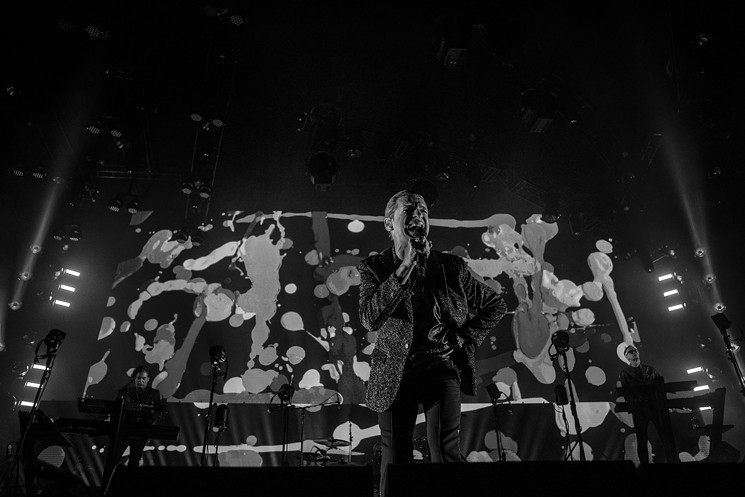 Depeche Mode performed at Ak-Chin Pavilion on Wednesday, September 27.
Jim Louvau
The best multimedia moment of the night came during “In Your Room.” Starting off with the image of a woman reclining on a velvet couch getting felt up by a dude with a mohawk, it turned into a ballet. The two of them danced in a crumbling apartment, their bodies spinning and intertwining and breaking away as Depeche Mode played their cacophonous tune.

That was perhaps the most surprising thing about their set. Depeche Mode are fierce live, far louder and rocking than you'd ever imagine from listening to their records. They even strike some interesting stage pictures, like the way Martin Gore would sometimes play a guitar shaped like a sparkly silver star or how they introduced “World in My Eyes” by having purple lights overhead shake and tremble like the beams of lights were having a seizure.

After “Cover Me” ended, Gahan headed offstage for a bit. In an interesting departure, Gore took up vocal duties for the next two songs: “A Question of Lust” and “Home.” The former was a highlight of the set. Backed only by a spare keyboard arrangement, Gore's plaintive and moving vocals inspired the crowd to singalong. As great as it was to see Gahan showboat, commanding the stage like a goth Joel Grey, it was a refreshing change of pace to see the more reserved Gore seize the stage with such a different approach.

Gahan returned to the stage with “Where's the Revolution” (a bit too heavy-handed a song for my tastes) and “Wrong.”

Following those numbers, Depeche Mode closed out their set with four all-time classics: “Everything Counts,” “Stripped,” “Enjoy The Silence,” and “Never Let Me Down Again.”

“Everything Counts” inspired a singalong as fervent as the one that broke out to “A Question of Lust” with people shouting along to “everything counts in large amounts” as the band made sprightly video game sounds onstage. The cameraman swooped around the crowd, showing people looking positively jubilant and dancing to the music. One lady even held up a license plate that read DM DVOT.

“Enjoy the Silence” stood out with a series of arresting images of neon-lit animals onscreen — cows, pigs, chickens, dogs, and rabbits. The song dissolved into a synthy, noisy jam as it lead into “Never Let Me Down Again.” Had the band ended the show right after that point, it already would have been a pretty great gig.

But then there was the encore. 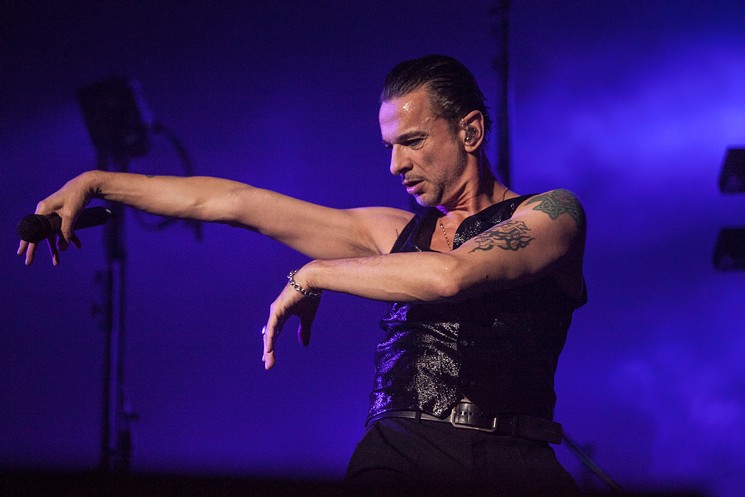 Depeche Mode performed at Ak-Chin Pavilion on Wednesday, September 27.
Jim Louvau
I normally hate encores. They're often so perfunctory: “Here's two more songs that you knew we were gonna play!” Credit to Depeche Mode. Their encore was the rare one that dazzled. It was basically a second mini-set.

The encore opened with another Gore vocal turn – this time for “Somebody.” Gahan came back on to do “Walking In My Shoes” as a video of a trans person getting dressed for a day out on the town played behind them.

The band played a subdued, wintry cover of Bowie's “Heroes.” A black flag rippled on a white screen as they paid their respects to one of their biggest influences. The band, for a moment, sounded like they had morphed into New Order — early New Order circa “Ceremony,” when they were still trying to shake off the ghost of Joy Division.

Depeche Mode ended with the one-two punch of “I Feel You” and “Personal Jesus.”

For a band famed for their synths and keyboards as poster boys of New Wave, many of the evening's most memorable moments came from guitar licks. As much as “Personal Jesus” is defined by Gahan's insinuating vocals and the electronics twitching in the background, it's Gore's weird, loose-spring guitar riff that makes it such a classic tune.

It was the perfect song to end a night of music that made me want to reach out and touch faith. Or at the very least, it made me want to lose some weight so I could pull off wearing a leather vest the way Dave Gahan can. 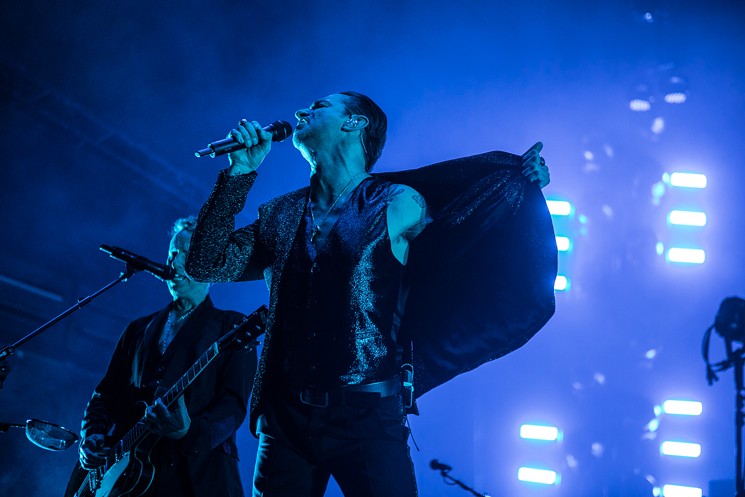 The Crowd: Everyone's goth mom and dad was in attendance. Your office manager who plays The Cure on casual Fridays was there with the bat stockings she wore in college. All your friends who cosplay as characters from The Matrix were there. The swinger couple from that S&M party you went to that one time were also there, wearing matching leather corsets and licking their chops at Jumbotron footage of Dave Gahan's bare midriff. It is exactly the kind of crowd you'd expect to see at a Depeche Mode show.

Random Notebook Dump: The dry-cleaning bills for this tour must be insane. How many leather vests do Gahan and Gore end up soaking with gallons of sweat each night? They either must have a pile of them that they're working their way through, or they must stink like the ripest of butts.

However, as a fellow vest enthusiast, I can't deny that they're wearing the hell out of those things. The stink would be worth it. Sometimes you have to suffer for your fashion as well as for your art. This is something that every goth living through an Arizona summer understands.