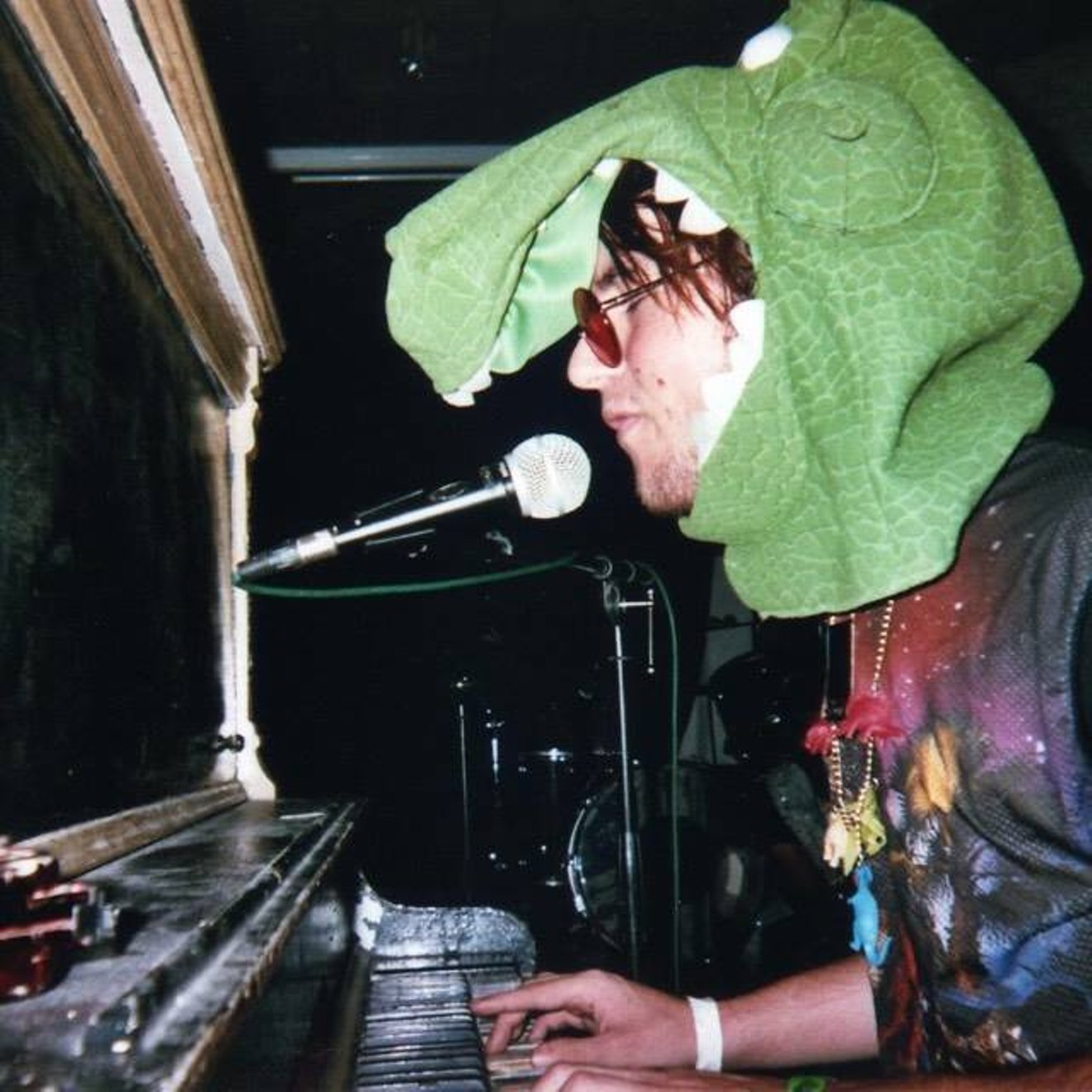 Dinosaur Love brings "conspiracy theory rock" to Trunk Space. Ryan Avery
For most people, dinosaur love is a phase they outgrow in childhood. They may spend a couple of years playing with stegosaurus figures and drawing rampaging T-rexes, but they’ll soon cast them aside for superheroes, Pokemon, or Jedi.

Peter Kulikowski isn’t most people. And the name of his one-man-band project, Dinosaur Love, says it all. He wears a huge green T-rex head when he takes the stage, singing songs about meteor strikes, dinosaurs in love, and why Jurassic Park really sucks.

It’s the sort of gimmick that you might dismiss as a novelty act, but you’d be wrong to do so — Dinosaur Love is no joke. Kulikowski has evolved into becoming one of Phoenix’s most prolific and versatile songwriters. In addition to playing all the instruments on his albums, he also self-produces his work. Combining guitars with garage rock organ sounds and the influence of The Beach Boys, Dinosaur Love produces songs that can sound as huge as the extinct muses that inspired them.

Full of '60s garage rock organ sounds, rollicking guitar licks, and lyrics about Illuminati conspiracy theories and messianic dinosaurs, it's sure to be one of the most unusual and inventive albums to come out of the Valley of the Sun in 2017.

New Times talked with Kulikowski about his love for dinosaurs, his interest in psych rock, and whether or not he thinks these majestic beasts still roam the earth.

New Times: If you died and your soul got shot back in time to be reincarnated in the body of any dinosaur, which dinosaur species would you want to be and why?
Peter Kulikowski: That’s a tough one! My favorite dinosaur is Ankylosaurus because he’s a badass and he’s got a club on his tail. But if I were to be any dinosaur, I think it would have to be a Protoceratops. It’s a small dinosaur that’s the size of a pig — it just kinda eats plants and hangs around. Whereas Ankylosaurus would always be getting into battles and I’m just not cut out for battles.

In terms of '60s psych influences, was it more of the harder rocking stuff like Jefferson Airplane, or was it more in the vein of orchestral psych rock like Love and The Beach Boys?
The Beach Boys are a really recent love of mine — some of the stuff that I’m recording now is heavily influenced by them. But for The Gospel I was really into The Monks. Super garage-y, real nasty organ sounds.

Tell me about the Illuminati and their role in The Gospel."
The Illuminati could mean a whole lot of things … It’s evolved into this crazy weird thing where it’s no longer just a secret society of philosophers trying to keep the Church out of things. Now, it’s more like, "We wanna take over the world." And of course, they’re led by reptilian shapeshifters.

That sounds like a combination of Scientology and Dinotopia.
Yeah, that’s pretty close.

Has your songwriting and production process changed since you completed your Single Of The Week project? Having to deal with the pressure of putting a song together every single week for a year — did that make you slow down your process since then, because you don’t have to fire something out all the time? Or have you found that the experience of doing that project made you work faster and become more prolific in the studio?
I initially did Single Of The Week as a recording project to figure out how I wanted The Gospel to sound. So the experience was less of me trying to become a better songwriter, and more of trying to learn how to be a better producer.

It wasn’t difficult for me to bang out songs. It’s not because I’m this amazing songwriter and blah-blah-blah … the opposite effect happened with Single Of The Week. Instead of feeling pressure, it was more like "this is a thing I’m going to do every week, and whether or not it’s good or bad I’m just gonna put it up." It really pushed me to not give a shit if my songs were bad. Which was good — there were a lot of songs from that project that I loved. And it also acts as sort of a musical diary from that time, because there are songs I can listen to and remember exactly what I was doing when I wrote that song.

Was the new album a full-on solo effort, or did anyone else play on the record?
All the instruments are played by me, and I also did all the voices. I recorded it with Josue Rodriguez, who owns Casa Butthole.

Do you have any idea what musical direction Dinosaur Love will take next?
Right now, I’m working on some stuff that is heavily influenced by The Beach Boys. The name of that project is “Dinosaurs Have Feelings Too.” Whereas The Gospel is all insane conspiracy theorist psych music, “Dinosaurs Have Feelings Too” is super heartfelt love songs that kinda mention dinosaurs. I bought a ukulele recently, so I’ve been playing a lot of ukulele on these songs.

What are your thoughts on the legends and reports of cryptid dinosaurs surviving in modern times? Like the tribes in the Congo that have reported seeing living sauropods in the deep jungle?
I’m really into cryptozoology. I think it’s very possible that something may have existed at some point in that tradition. When you think about those tribes in the Congo, they’ve got thousands and thousands of years of oral tradition. It’s possible that when those stories were first being told, there actually was that thing out there. I don’t think there is now. It’s possible some dinosaurs may have survived … I feel that way about the Loch Ness Monster too. Have you seen that photo of the cowboys holding up the pterodactyl?

No! What photo?
There’s this picture of cowboys who shot down a pterodactyl. I don’t know how real it is, but it’s probably really real.

Yet another reason why the Wild West sucked.
Pterodactyls everywhere!