Everything You Need to Know About the Flying Burrito Festival

‘Tis the season for festivals of every size, shape, and bent imaginable. Heck, there’s even one happening this weekend inspired by burritos.

The inaugural Flying Burrito Music and Food Festival takes place on Saturday, March 10, in and around Crescent Ballroom in downtown Phoenix. As its name portends, it promises a mix of bands, burritos, and booze, all wrapped up in a single event.

More than 20 bands and musicians – including headliners Albert Hammond Jr. of The Strokes, noise rock duo No Age, and surf punk act The Frights – are scheduled to perform during the seven-hour festival, which is the brainchild of local concert promoter and venue owner Charlie Levy.

The event, which is also sponsored by Phoenix New Times, will encompass both the Crescent Ballroom itself and the portion of Second Avenue between Van Buren and Fillmore and feature four different stages.

Meanwhile, more than dozen different local food trucks and vendors will sell a variety of burritos, including some with some unique combination of ingredients (like one filled with pulled pork and mac and cheese, for instance).

There’s even an after-party at The Van Buren just down the street.

"You'll come down for sunset, grab some food, and see some bands,” Levy told New Times last month when describing the festival. "The cherry on top is that we'll have a big after-party."

What else can you expect to encounter at the first-ever Flying Burrito Festival? Check out the following guide to the event for full details.

It's going to be burrito bliss at the Crescent this Saturday.
Benjamin Leatherman
When and Where: The Flying Burrito Music and Food Festival will take place on Saturday, March 10, at Crescent Ballroom, 308 North Second Avenue. Gates open at 4 p.m. and the event runs until 11 p.m.

Price: Tickets are $15 in advance and $20 the day of the event. There’s also a combo ticket that includes admission to both the festival and the after-party at The Van Buren for $33.

Age Limits: It’s an all-ages event. Only those 21 and over can buy alcohol.

Weather: The forecast calls for cloudy skies and temperatures in the low 70s and high 60s. In other words, bring a light jacket or hoodie.

Getting There: Crescent is two or three blocks east of the Van Buren Street/Central Avenue Valley Metro transit if you’re coming by light rail. If you’re driving (and have inexplicably never been to the venue before), take Interstate 10 to Seventh Avenue and head south to Van Buren before going east for a few blocks.

Parking: Metered parking will be available on the streets near Crescent (except for Second Avenue, of course). It’s $1 to $1.50 per hour until 10 p.m. There are mobile apps like Pango where you can prepay for a specific block of time as opposed to dashing out to feed the meter. 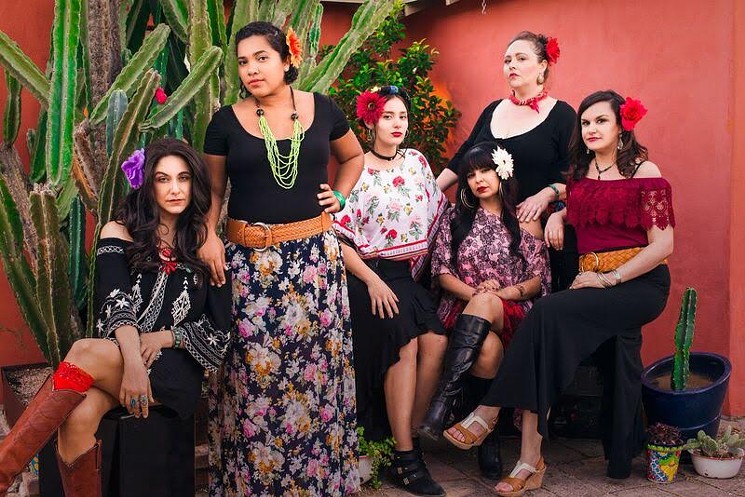 Catch Las Chollas Peligrosas at Flying Burrito Fest.
Nader Abushhab, NBMA Photography
Lineup and Schedule: More than 20 bands and acts are scheduled to perform at the festival, including headliner Albert Hammond Jr. There will be four different stages at the festival, both indoor and outdoor, and each will be appropriately themed. Crescent’s ballroom will become the “Carne Asada Stage” for the evening, while Sun Devil Auto next door to the venue will serve as the “Nopales Stage.”

Meanwhile, the “Al Pastor Stage” will be located on the north end of the festival along Second Avenue and the “Bean & Cheese Stage” will be situated behind DIY spot El .

Here's the breakdown of who's performing, as well as when and where they'll be doing it.

The Crescent Ballroom in downtown Phoenix.
Benjamin Leatherman
Food: As we mentioned, burritos will be a big thing at the festival. More than a dozen different food trucks and vendors will be arranged in one of the parking lots on the west side of Second Avenue and other spots along the street. And each of 'em will have burritos available for purchase, including Ladera Taverna y Cocina, Mi Salsa, ACA-MEX, Elote Man, and Frijolitos.

Other food vendors and eateries that will be at the festival include The Boulders, Different Smoke BBQ, Hummus Xpress, Mobile Coffee, Two Fat Guys Grilled Cheese, Marcel Waffles, and Paletas Betty.

And since many of these trucks and vendors aren’t typically known for serving burritos, festival organizers say that attendees should expect some unique takes on the item.

Different Smokes BBQ will have an “Everything Burrito” with slow-smoked pulled pork, mac and cheese, shredded barbecue beef, and coleslaw wrapped up in a flour tortilla. If you’re interested in something that won’t put you into a food coma afterward, the folks from ACA-MEX will have a “Calabaza Burrito” with zucchini, corn, bacon, diced onion and tomato, cotija cheese, and sour cream.

Samples of burritos will also be available for $2 each.

The Crescent’s in-house restaurant, Cocina 10, will also have all seven of its signature burritos available (either in tortilla-wrapped or bowl form). They’ll also have chips and salsa, cheesy bean dip and chips, guacamole and chips, the Cocina 10 salad, and rice pudding available for purchase.

Drinks: You can whet your whistle at any of the bars and drink vendors that will be set up and . Both of Crescent’s bars (in the lounge and ballroom) will be operating and mixing up its signature cocktails, including the Casa Blanco margaritas and the Honey Badger. There will also be a large outdoor bar, a sangria tent, and a few beer tubs.

Tables: Don’t want to eat your burrito smack-dab in the middle of a crowd of concertgoers? A series of community-style tables will run the length of Second Avenue where attendees can hang out while polishing off their food.

The Frights are scheduled to perform at the inaugural Flying Burrito Festival in downtown Phoenix.
Everett Fitzpatrick
Games: If you need a break from standing in front of a stage, there will be an area featuring a variety of lawn games – including cornhole and giant-sized versions of Connect Four and Jenga – along Second Avenue just north of the food trucks.

Vendors: Besides the requisite merch booth (which will have band and festival gear for sale), local art/social group Cut + Paste will have a tent at the event.

After-Party: Renowned hip-hop artist Talib Kweli will headline the festival’s official after-party, which kicks off at 9 p.m. just down the road at The Van Buren. East Bay rapper Caleborate and locals WOLFZiE, Lando Chill, and Truvonne are also scheduled to perform. General admission is $21.50 for just the after-party and $33 for both the festival and the after-party.

Editor's Note: This story has been updated with additional information since its original publication.