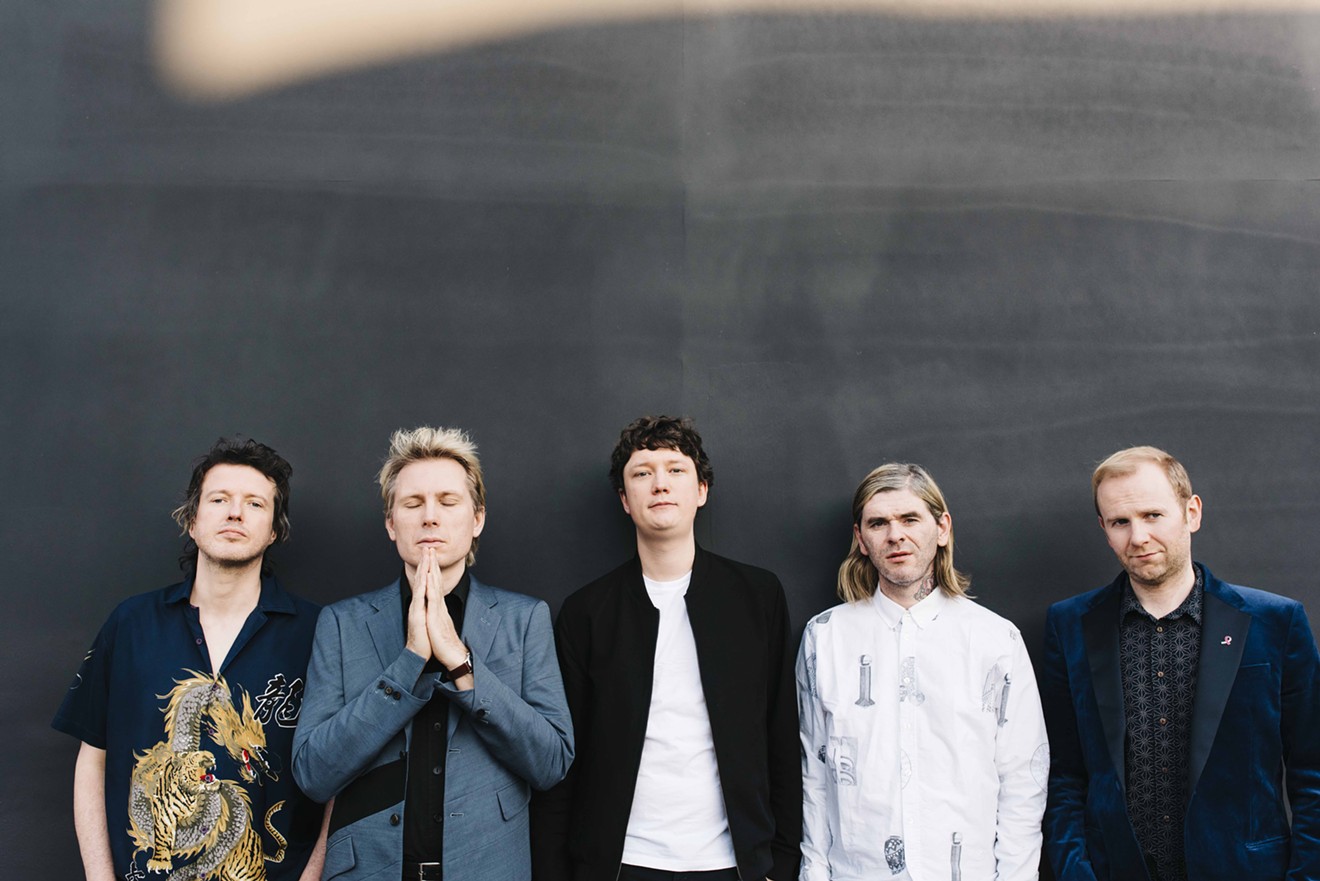 
It doesn’t make much sense to ask Julian Corrie about what it was like when Franz Ferdinand was breaking out of Glasgow, Scotland, in 2004. The keyboardist was listening to “Take Me Out” with the rest of us, chasing musical aspirations of his own.

Corrie joined the quintet in 2017 to help replace Franz Ferdinand guitarist Nick McCarthy, who departed to spend more time with his family. (Guitarist Dino Bardot also was added to the lineup.) Before Corrie was emailed by lead singer and guitarist Alex Kapranos to possibly join the band, he was recording bright and poppy electronica under the name Miaoux Miaoux (pronounced “meow meow”). Many critics have credited the musician with helping to revitalize Franz Ferdinand’s art-rock sound.

“It kind of worked from the start,” Corrie recalls from his first meeting with Kapranos at his studio. “It was quite a natural thing. They’re very easy guys to get along with, but creatively we are in the same place as well.”

You can hear Corrie’s sensibility shine through on Franz Ferdinand’s fifth full-length album, Always Ascending. Instead of talking about society’s ills (smartphones, social media, and American politics) with condescension and gloom, the band tackles these issues with a wink and a laugh. The dance-pop songs conjure up images of Mark Twain’s Huckleberry Finn and Jim drinking 40s and Instagram stars winning Academy Awards for taking videos of their seemingly happy lives.

Corrie took some time before a show to speak over the phone with Phoenix New Times about discovering music through his older brother and being the youngest member of a band that has been around since he was 17 years old. This interview has been edited for length and clarity.

Phoenix New Times: I was reading about your life before joining Franz Ferdinand and noticed you were a fan of the seemingly forgotten ’90s electronica duo Propellerheads, who I loved back in the day.

Julian Corrie: [laughs] My older brother had the Propellerheads’ record. I used to play it all the time. I got into DJ Shadow after that, which got me into hip-hop. I bought a sampler and started making songs from that.
Listening to that [Propellerheads’ record] now, some of it has aged quite badly, but some of it is pretty cool. The spy stuff that seemed quite trendy in the trip-hop scene doesn’t seem so cool now, but the drumming is fantastic. I really like the production of it. That and hearing The Prodigy for the first time made me say, “Man, I want to make sounds like that!” It was an inspirational record from that point of view.

What are you looking for in music now?

I think I look for stuff that surprises me and is made honestly. I think a lot of good music, regardless of genre, you can hear the voice of the creator. If it comes through, I think that is what I am looking for. That is what successful music is. I think when you hear an act and they’re talking in someone else’s voice, that is less interesting. That’s a little abstract, but it’s the best way I can put it.

Is what you are doing now with Franz Ferdinand exciting in the way you described?

I think so. I think what has been really satisfying about working with them is they have a good idea of what excites them. When we came to make Always Ascending, we all agreed we wanted to follow our instincts and find sounds, songs, and ideas that really excited us and see where they led. I think we succeeded. It’s a really fun record and reflective of the fun we had making it.

I assume you were a fan before you were approached about joining the band.

Absolutely. I remember the first single “Darts of Pleasure” coming out and seeing them on TV. Honestly, when “Take Me Out” came out, it was everywhere. When Tonight: Franz Ferdinand came out, I remember being really into that, especially the single “Ulysses.” I said, “What is this?” It had the same effect on me like we were talking about earlier. The honest voice of the band was there, but it was very peculiar. It really struck something with me. It is a total honor to be with the band now.

Is this your first time collaborating with a band?

Both of the Miaoux Miaoux records I wrote by myself, which is cool, but it is really hard work. Proper blood and sweat went into those. Working with other people is a challenge at first, but the more I got into it, the more I realized how liberating it was. Something I really respect about their creative process is they are constantly remixing ideas. When I was writing before, I would say, “This is the song. It’s not going to change.” I appreciate the approach of being flexible with ideas.

Just from listening to your records as Miaoux Miaoux, I can hear your influence on Always Ascending. As the new guy, how did you go about inserting your ideas on the record?

It’s funny you say that because, actually, there was nothing I did consciously to make something sound like me. Alex has talked in the past about working with producers who want to put their own ideas on stuff. It forced me to do a little bit of the same, but it wasn’t like, “Those are your ideas and these are my ideas.” They’re our ideas.
In a way, it is gratifying to hear people say they can hear my influence on the record. It’s a natural part of being in the band. I was lucky enough and they were gracious enough to have all our voices on the record.

I am a little hesitant to ask this question because it has to do with age, but with you being the youngest member of the band, did it ever feel like there was a generation gap between you and the other members of the group?

We are all into music and that is very easy to talk about. There doesn’t feel like there’s a disparity there.
Alex talks about Sparks often because they toured with them as FFS for a year or so after doing that record. Ron Mael [of Sparks] is in his 70s now. He’s still going as an amazing musician. I don’t think age comes into it. You are really as old as you feel. There are people I know in their 20s who act like they are in their mid-50s.

It goes to show that some things are the same no matter how old you are.

I think one of the many unhelpful aspects of the music industry is there is so much pressure placed on age, especially in pop. It’s total bollocks! As soon as you think of yourself as a lifelong musician, it all goes away. Nobody talks about jazz musicians that way. It’s a skill and a craft. You work at it and get better.

Franz Ferdinand are scheduled to perform at The Van Buren on Friday, May 11. Tickets are $31 via thevanburenphx.com.
KEEP PHOENIX NEW TIMES FREE... Since we started Phoenix New Times, it has been defined as the free, independent voice of Phoenix, and we'd like to keep it that way. With local media under siege, it's more important than ever for us to rally support behind funding our local journalism. You can help by participating in our "I Support" program, allowing us to keep offering readers access to our incisive coverage of local news, food and culture with no paywalls.
Make a one-time donation today for as little as $1.