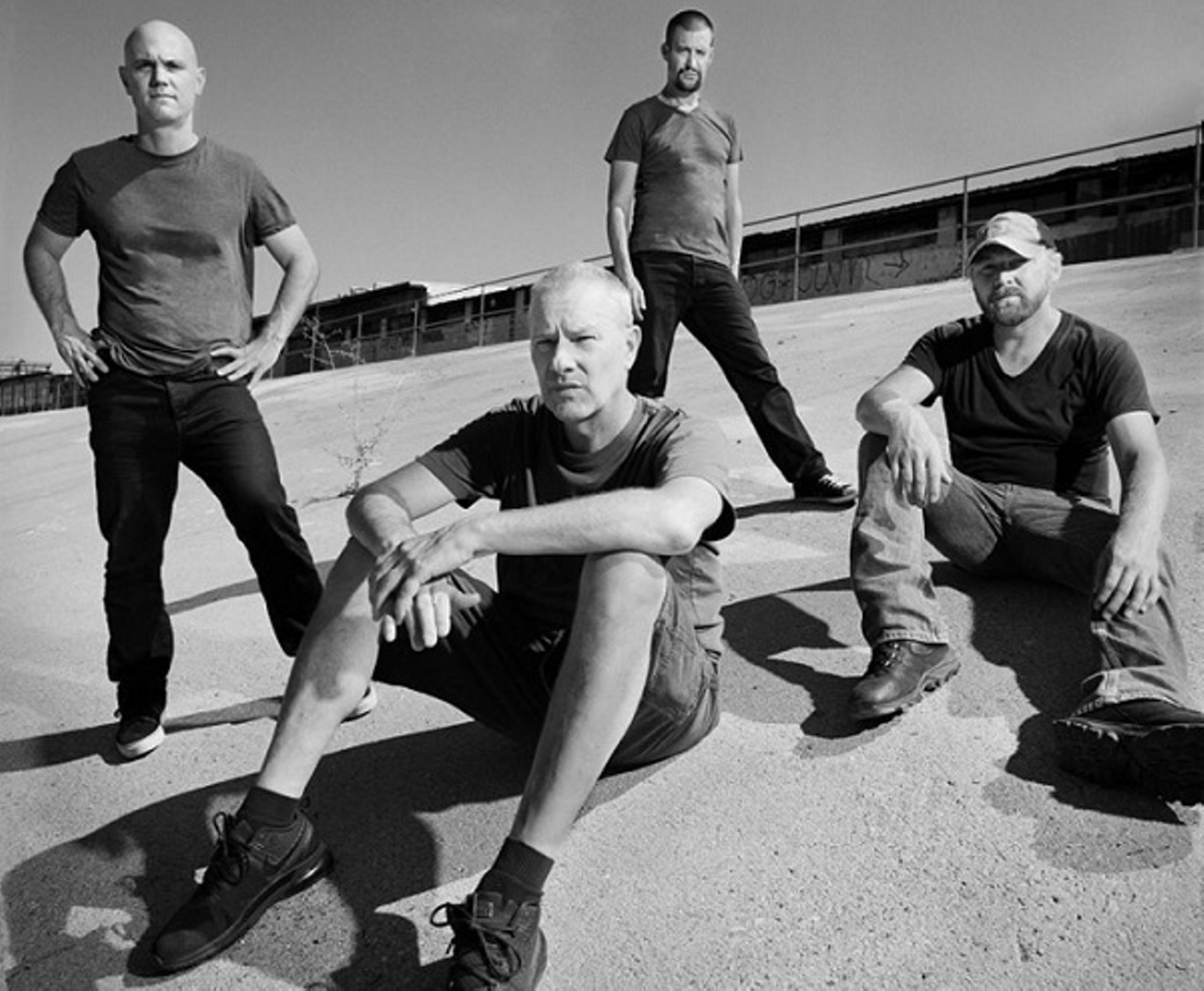 Helmet is coming to Phoenix on their 30th Anniversary tour. Good thing they are traveling alone. Jacob Blickenstaff
There is a famous line from William Shakespeare’s Julius Caesar. Mark Antony says, “We come to bury Caesar, not to praise him.” In this day and age, that statement seems to fit so many things. That's fucking Shakespeare, man. It just works on so many levels.

For instance, I come not to bury Helmet as their 30th-anniversary tour arrives at Crescent Ballroom on Tuesday, November 5. But I'm not here to completely praise them for one major reason:

They often get blown away by their opening acts.

In the beginning, New York City’s Helmet were something of an anomaly. A bunch of dudes with short hair playing abrasive and darkly intense music that was heavy on the metal, but also chock full of scissor-whipped prog lead guitar parts and charred punk rock ethics.


Their debut record, 1992’s Strap It On, is a thing of beauty. It’s chaos amid a regimen of syncopated drum blasts and jazzy, damaged guitar that inspired angry kids everywhere to start waves of post-metal/punk bands.

The first time I saw Helmet, they played the Mason Jar in 1992 (which is now The Rebel Lounge and, yes, your parents went there) on a bill that many would probably commit a felony to see today. There was the fully revved-up Quicksand (also from New York City). They were about to drop their critically acclaimed Slip record.

The heavy noise blasts of the opening act came from none other than the Minneapolis-trio Hammerhead (who later morphed into Vaz). It was beautiful. Every sweaty person in attendance that night was treated to an amazing show by all three bands.

As a fan of Strap It On and Meantime, which had come out right around that time, I thought to myself, “I’ll never miss another Helmet show.”

In 1993, Helmet headlined Club Paradoxx, which was once the French-themed buffet, Café Casino. It shared a parking lot with the original Ciné Capri on the southwest corner of 24th Street and Camelback Road. On the bill with Helmet this time was Chicago’s The Jesus Lizard and Therapy? from Ireland.

The Jesus Lizard were one of the best live bands ever. They destroyed Helmet that night. It was devastating. I remember talking to people after the Lizard left the stage, and there was a palpable buzz in the club. Everyone wanted to know how Helmet were going to follow that, and what they did was come out and play some of the most uninspired heavy music I’d ever heard. People left before the show was through because, honestly, it was over before Helmet's lead singer and guitarist (and only current original member) Page Hamilton hit a chord.


In 1994, they came through with Sick of It All and Today Is the Day on the Betty tour. Another bad move by Helmet. They were outclassed, especially by Today Is the Day who had just released the amazing Willpower record. Holy hell.

Once again, by the time Helmet came on, they felt like an afterthought. While Betty is arguably Helmet’s last interesting record, the band seemed to be bored with playing the songs after only six months of the record being out.

A few years later, Helmet returned to Tempe and played the Electric Ballroom with the Melvins in 1997. I remember having dinner with friends beforehand at Caffe Boa on Mill Avenue. We were hoping that a few years away would be good for the band, and that they wouldn’t get blown away by the Melvins.

After the Melvins ripped through about seven or eight straight songs from Bullhead and Stoner Witch, we knew Helmet didn’t have a chance. I guess you have to take your hat off to Helmet, though, for taking great bands out on the road over the years. More recently, they’ve gone out with The Toadies, Mastodon, and the killer but totally underrated Totimoshi.

It's fitting that there isn't an opener for this 30th-anniversary show, for sure. If you look at the Crescent Ballroom calendar, Dinosaur Jr. and the Melvins are headlining the downtown venue on successive nights, so there is still a chance that people in the crowd will be talking more about the bands who played before them, even if it's not on the same night.

Helmet are scheduled to perform on Tuesday, November 5, at Crescent Ballroom. Tickets are $20 via Eventbrite.
KEEP PHOENIX NEW TIMES FREE... Since we started Phoenix New Times, it has been defined as the free, independent voice of Phoenix, and we'd like to keep it that way. With local media under siege, it's more important than ever for us to rally support behind funding our local journalism. You can help by participating in our "I Support" program, allowing us to keep offering readers access to our incisive coverage of local news, food and culture with no paywalls.
Make a one-time donation today for as little as $1.