Here's Illya Riske's Secret to Having Three Guitarists in a Band Illya Riske rocking out. Elaine Thomas Campbell
In Pound For The Sound, Phoenix New Times gets technical with local musicians about what gear they use to create their signature style.

There Is Danger guitarist/vocalist Illya Riske is a doer. The man is a shining example of what "putting in the work" means. And he has a distinct style of playing guitar, one that always stands out in a crowd.

Riske was born in Detroit, but he calls Phoenix home. He moved here in first grade, and has been a Phoenician ever since. At the age of 8, he started taking piano lessons. Though he enjoyed the instrument, at age 15, he made the switch to guitar and began taking "rock" guitar lessons with Norris Lewis at Milano Music in Mesa. From there, everything began moving forward musically.

Riske also has a rich performance history with bands in the Valley. He was in now-disbanded DIY touring acts Reindeer Tiger Team and Whisperlights. He went on to found There Is Danger, and he's currently one of the guitarists for local powerhouse Phoenix Afrobeat Orchestra (PAO).

Riske, and the rest of There Is Danger, recently released a new single called "Sleep All Day" this past Sunday. They also have plans for a new record, Mirror Eyes, to be released in early 2018. With all the news, New Times decided to catch up with Illya to talk about gear, DIY touring, and the band's new single.

New Times: What's the secret weapon of your sound? And how did that help you find your "signature" tone?
Illya Riske: Personally, my tone is tied to reverb, delay, and overdrive pedals. I really like darker-sounding guitars, so I play hollow-body guitars through a Fender Bassman amp. There Is Danger has three guitars, which is a lot of guitars, so there’s a lot of negotiation and communication required to make sure that everything doesn’t sound like soup and so we don’t step on each other’s toes. All three guitarists also have distinct enough tones so that it hopefully sounds interesting enough and not too duplicative. Communication and a good delay pedal is the secret weapon.
What's your favorite piece of gear in your collection and why?
My favorite piece of gear is my guitar. It’s a Japanese-knockoff of a Gibson 335; it’s old and it sounds like a ghost when I sing into the F-holes. Also sounds nice when you play it. 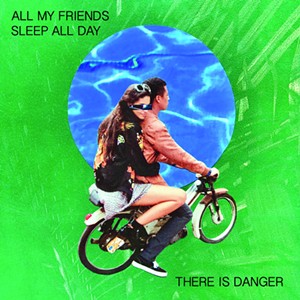 Artwork from There Is Danger new single.
Davina Griego
Any special pieces of gear acquired over the years? Any special story, or stories, behind your collection of tools?
I think that my favorite pieces of gear are a Roland Space Echo Tape Delay, an old Shure crystal microphone, and my Fender champ amplifier. I have used all three on pretty much everything I've recorded, no real story behind them unfortunately, they’re just super-reliable and usually provide the texture that I consistently go back to.

Just listened to your most recently released track, “Sleep All Day.” Great song! I particularly noticed how the guitars went from airy, surfy, and spacey in certain parts of the song, to almost fuzzy, crunchy sounds later. And then sometimes, the guitar sounded like whales just rocking out. How did you go about getting all of these sounds all over the track?
Thanks! For the most part, the guitarists kept our tones about the same throughout, so that change should really be attributed to Chris Kasych, our friend [and] the engineer who mixed it. That and trying to pick your spots when there are two other guitars besides your own going at the same time is always a delicate balance.

What advice would you give to someone wanting to start a band with the intentions of DIY touring to build their fanbase?
I would tell them to play as much as possible locally and to try to help out touring bands when they come through, let them sleep on your couches, and make them breakfast. I’ve met the best musicians and nicest people that way, and it’s helped when I’ve been ready to tour because you have friends in places you’ve never been.

What are the plans for the rest of your upcoming album? And any other updates you wish to share with your fans?
We’re going to release another single in a few weeks, and will be putting out an EP probably around January or February. We’re very excited about the next few releases and will be performing more soon.