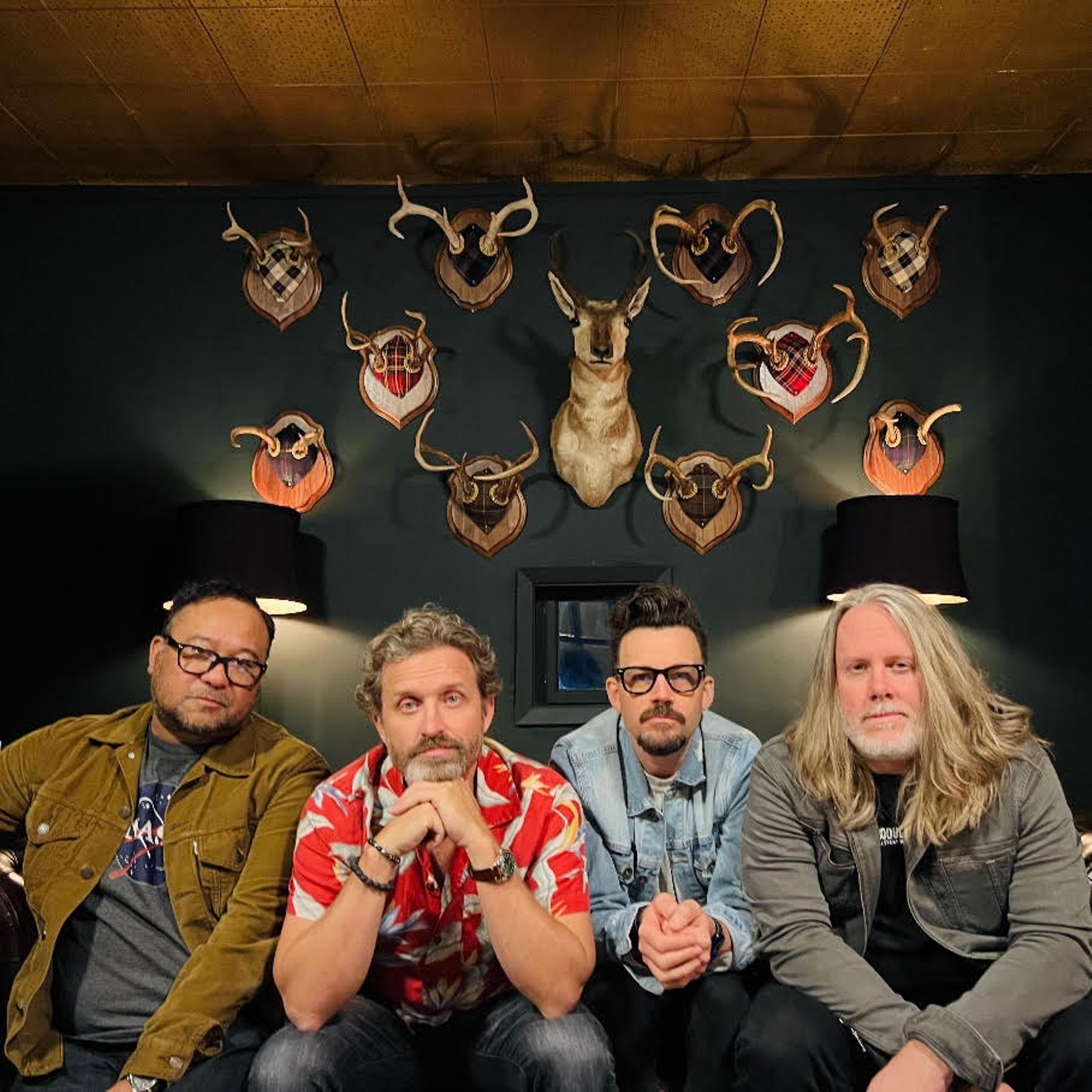 Louden Swain is, from left to right: Michael Borja, Rob Benedict, Billy Moran, and Stephen Norton. Jason Manns
The title of the new album by indie rockers Louden Swain, Feelings and Such, is more than a name — it's a testimony.

“I think in many ways, musically, this album represents a breath of fresh air, relief,” says Billy Moran, one of the band's guitarists.

Formed in Los Angeles 25 years ago, Louden Swain is composed of Moran, plus lead singer and guitarist Rob Benedict, bassist Michael Borja, and drummer Stephen Norton, who hails from Phoenix.

Feelings and Such is scheduled to drop this Friday, November 11, which just so happens to coincide with the kickoff of a weekend of local shows.

Benedict is more than a musician — he's also an actor with a long list of credits, including 20 episodes of Supernatural playing Chuck Shurley, a.k.a. God. So Louden Swain is going to be the "house band" of this weekend's Supernatural convention in Glendale, an event that includes a concert on Saturday, November 12, that's open to the public.

Benedict says that this upcoming album is very special to him because he writes from a personal place, and Feelings and Such is more emotionally specific than the others.

“All of us have gone through turmoil over the last few years," he says. "Certainly, it was accelerated by the COVID lockdown that we all went through.”

He says coming out of that, as well as some personal problems, has made him brutally honest in his songwriting.

“Sometimes I try to dare myself to be as honest as I can with the lyrics," Benedict says. The result is an album with a particularly personal vibe.

Other members of Louden Swain experienced their own challenges during the creation of the album: Borja lost his father, and drummer Norton was battling colon cancer. Benedict himself went through a divorce.

“We were just so excited to get back together,” after making their previous album, Foolish, remotely, Norton says. He says once they were reunited in person for Feelings and Such, their bond was renewed.

“We can’t wait to get out and play it for people live," Norton says. "It’s one of those records that’s got a ton of energy. Being able to be together to do it just meant so much to all of us.”

The guys don’t split hairs when it comes to which they prefer: performing live or in the studio. They say both are gratifying.

“They're two different things,” Benedict says. “Being in the studio creating with the guys is a really special thing. I look forward to that. But then playing live is equally as gratifying. We identify with people and we play music so it can be heard. These songs kind of grow and change characters a little bit when you start playing in front of people, so that’s fun to do that as well.”

Keeping a band together for over 25 years can be tough. There are horror stories out there about longtime feuds between band members that have resulted in breakups and animosity. But Louden Swain seems to have circumvented all of that, and Moran says he knows why.

“We don’t do hard drugs,” he says, laughing. “I think if we had these issues, it would be a lot harder to keep this band together. We all love each other; we all respect each other. We really respect the music and this band. And to let anything get in its way would be a disservice to everybody.”

So it's as a united force that Louden Swain are heading to Phoenix for the Supernatural event, which is taking over the Renaissance Phoenix Glendale Hotel & Spa.

“We have up to about 2,000 people that gather together," Benedict explains. "Actors from the show, including myself, will have panels, sign autographs, and have pictures and everything. But what makes this different from other fan events is that we have the band.”

On Thursday, November 10, some of the convention guests will hit the town for a sold-out bus tour with that band that will highlight various music-themed landmarks around Phoenix. But the marquee event for Louden Swain is the November 12 show.

Called Saturday Night Special, it'll be hosted by Benedict, include appearances by Supernatural cast members, and feature a concert by the band.

“It’s a really cool thing," Benedict says It’s a special thing because the fandom surrounding Supernatural is a very loyal fanbase that really helped keep that show on the air for 15 seasons.”

Besides entertaining attendees at the convention, the band has also partnered with the nonprofit organization Random Acts. Donations such as musical items, clothing, and food will be accepted and given to Alice Cooper’s Solid Rock Foundation for teen centers in the local area.

After 25 years, the brotherhood of Louden Swain still remains intact. Even after personal struggles and a worldwide pandemic, the band is as solid as ever. Feelings and Things is a testament to that rare alchemy.

“We're super excited about this record,” says Benedict. “We couldn't be more grateful for everything and all the opportunities that we've gotten, it's awesome.”

Saturday Night Special. 9 p.m., Saturday, November 12, at the Renaissance Phoenix Glendale Hotel & Spa, 9495 West Coyotes Boulevard, Glendale. Cost is $80 at the door. The Supernatural convention will be held November 11 through 13 at the hotel. A variety of ticket packages are available at the door. For more information, visit the Creation Entertainment website.
KEEP PHOENIX NEW TIMES FREE... Since we started Phoenix New Times, it has been defined as the free, independent voice of Phoenix, and we'd like to keep it that way. With local media under siege, it's more important than ever for us to rally support behind funding our local journalism. You can help by participating in our "I Support" program, allowing us to keep offering readers access to our incisive coverage of local news, food and culture with no paywalls.
Make a one-time donation today for as little as $1.
Timothy Rawles