Jane's Addiction Delivered a Blast of the Past in Tempe 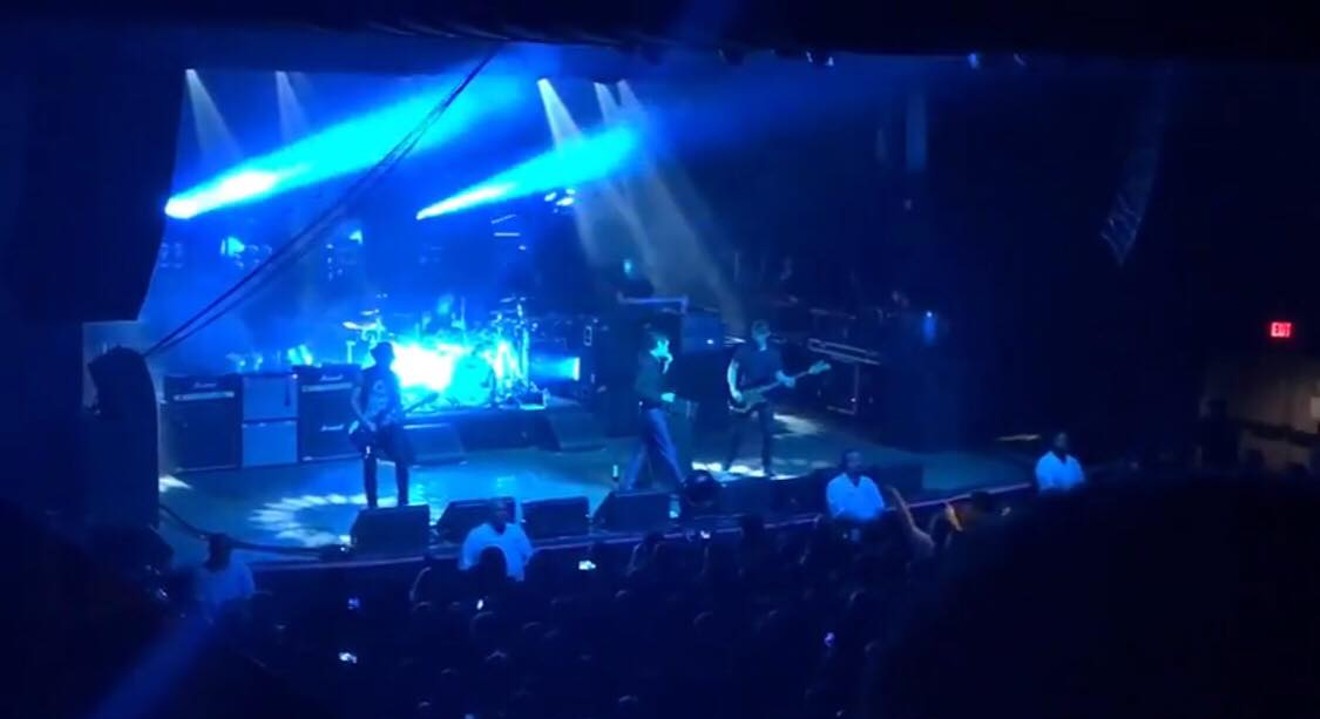 To be fair, the whole shebang might have hovered around 70 minutes. The set was surprisingly short, but easily succeeded in giving the packed crowd the Jane’s fix they came for. Judging by the crowd's continuous loud-ass howls, runny mascara ugly-crying, and super-emo lyric deliveries along with the band’s front man, Perry Farrell, folks were fucking satisfied.

As they slid from “Up the Beach” into the frenetic “Stop” from 1990’s Ritual de lo Habitual, Farrell solidified his position as the psycho-circus ringmaster, his wild and maniacal eyes open wide, creating freaky facial expressions to match his exaggerated dance moves.

Part of what has always made Farrell exciting is his combination of a chaotic personality mingled with a poetic and hopeful view of life. That wasn’t completely absent from last night’s show, but it would have been nice if he’d dug into it a little more.

Sure, he addressed the crowd, encouraging finding some togetherness in the Trump era. He got Arizona-centric, talking about former sheriff Arpaio. But he didn’t get gritty, and that was unfortunate.

Before they busted into “Ocean Size,” Farrell was extolling the virtues of using psychedelics, asking the crowd if they “tripped much,” and explaining why they should. “It’s fucking fantastic and opens you up to a whole new world."
Sure. But if you’re gonna get into that conversation, bring it into the show. This is a band that can fucking jam — so well that people who roll their eyes about songs that go over two minutes long can still appreciate the eclectic funk, punk, and glam rock mix-up the band offers.

It would've been a perfect opportunity to create a heady musical vibe while promoting an acid mentality. Instead, there were go-go dancers.

The dancing duo appeared during a few songs, including “Ted, Just Admit It,” from Nothing’s Shocking, which Farrell prefaced with a hitchhiking story, kicking off the gloriously creepy tune while the women tied themselves up with ribbons and engaged in unison moves. 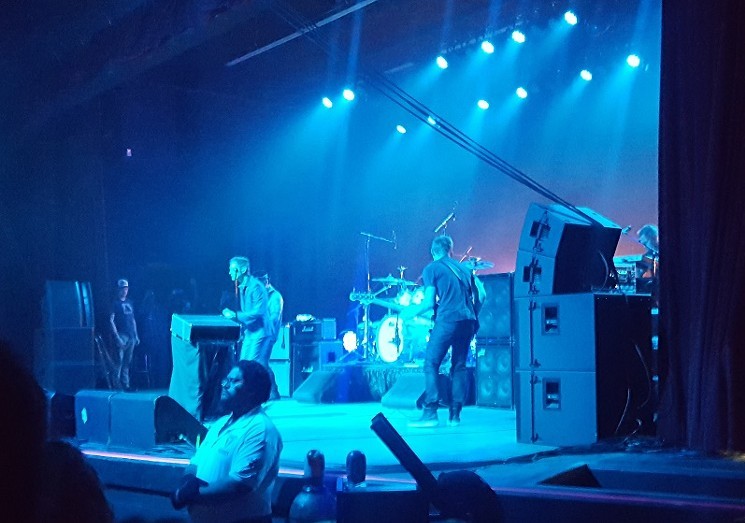 Jane's Addiction at the Marquee Theatre.
Amy Young
It was more exciting to watch Farrell unite with the music as the song went on, whipping around and spinning himself into a feverish little whirling dervish.

Later, when the band did “Whores,” the women came back out with suspension hooks in their flesh to be raised over the crowd where they swung around. It felt dated and a little cheesy.

Sure, it’s part of the band’s culture, which was founded on exemplifying the freak-scene they grew out of, but last night it just felt like it was filling an unfounded need to visually re-create those early years, when really, the rock was all they had to bring.

And that, they did. Farrell belted with force. Dave Navarro, while low-key AF when it came to stage moves, brought those killer riffs to life. Stephen Perkins on drums is nothing short of a force of nature. He pounded his way through the hour, mixing low-tone, jungle drum beats with punchy and crisp snare hits, keeping everything on point.

Fans still get a little misty about original bassist Eric Avery not being in the band, but it’s beyond time to get over it. Chris Chaney was wicked and lively throughout the night.

Closing with “Jane Says” was a nice way to end. Some hand drums were added to the mix, giving texture to its sway and swagger, and the rendition was poignant and powerful. It definitely left people wanting more.

Critic’s Notebook
Last Night: Jane’s Addiction at the Marquee Theatre
The crowd: Happy and obnoxious Gen X-ers.
Overheard: "I'm kind of glad it's over early; my wife said I can stay out until 11 tonight!"
Notebook dump: Axe Body Spray is still a thing??!